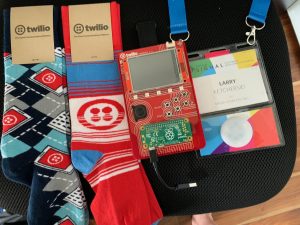 Because one of my developers could not go at the last minute I attended the Twilio Signal conference held October 16-18, 2018 at the Bill Graham Auditorium near City Hall in downtown San Francisco. I’m glad the opportunity presented itself – the one-day Superclass was worth the trip by itself, plus I met lots of Twilio people to discuss partnerships, learned about Autopilot and Pay (see below), got new socks…and got to watch the Packers beat the Niners at a Packers Bar in SF (Go Pack Go).

The recommended hotel was on Market Street, the weather was excellent so I was able to avoid the bus and walk a mile to the conference each day….and run along the Embarcadero in the mornings!

Superclass is a one-day programming event built around the TwilioQuest training platform and schedule development lectures. Each table had a Twilio rep as a proctor who could either help or find some other Twilio person to help.

I’d previously completed a few of the TwilioQuest missions and found it an excellent learning tool. Systems like TwilioQuest and Loom’s CryptoZombies (a platform for learning Solidity programming for writing Ethereum contracts) are excellent introductory tools to their respective development environments. 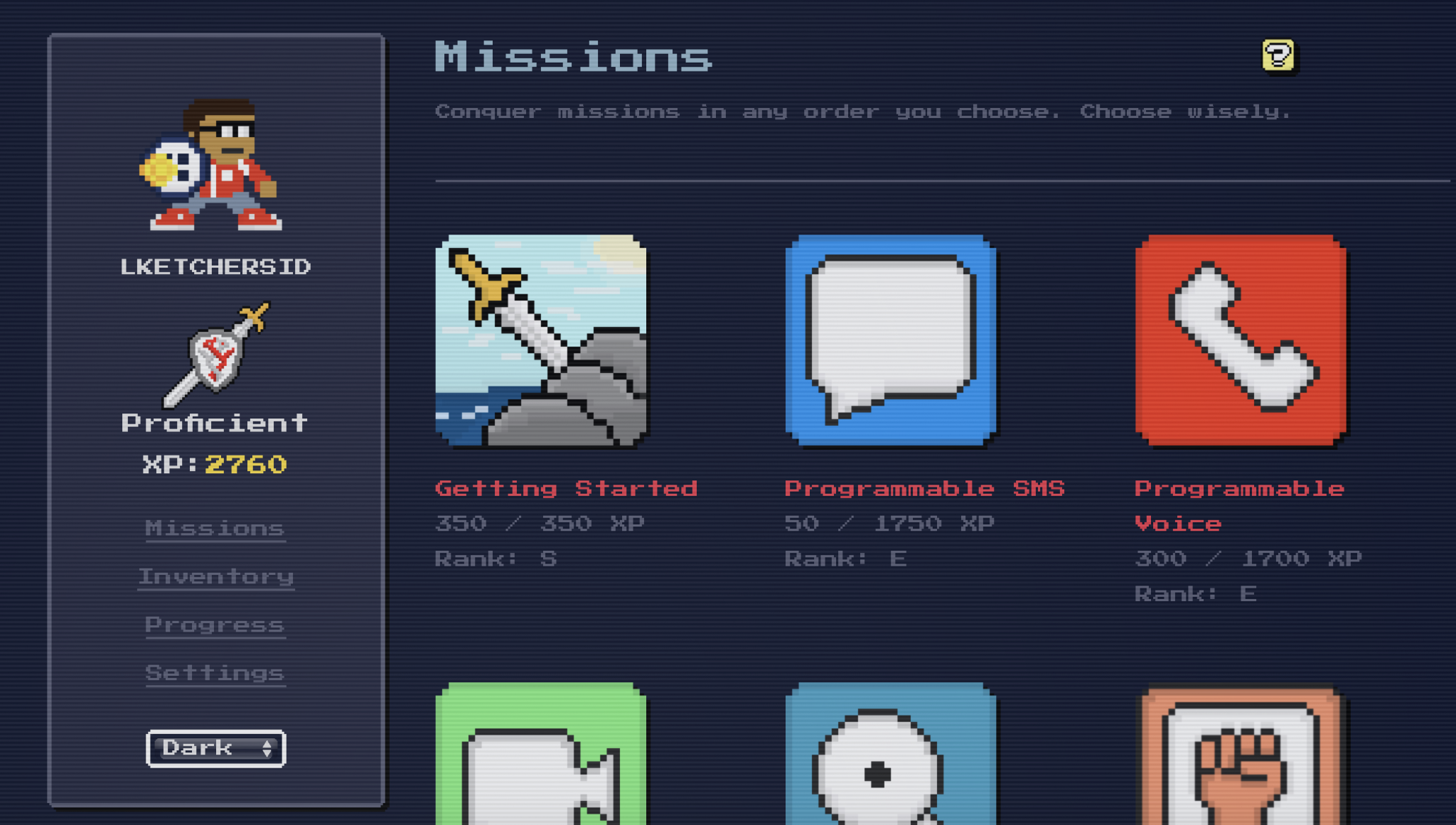 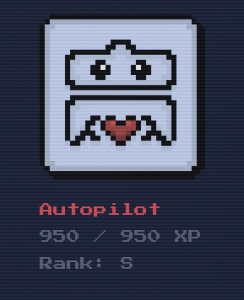 Twilio was releasing Autopilot and Pay the next day, and released the TwilioQuest missions one day early. After getting some permissions and access set up (another reason for having a table rep!), I spent most of the morning digging into these two. Pay is simple to setup and use, got the Stripe connector working and took payment with an integrated Programmable Voice and TwiML very quickly. We’re already looking at how to integrate Pay, especially for after-hours processes to collect co-pays or other payments, and looking forward to other payment partner integrations.

Autopilot was nearly as easy, training a machine learning model (or two) for Natural Language Processing to ask for a fact or joke was very fast…and scarily accurate. I’m augmenting the version I built through TwilioQuest to support asking to play a song from the best rock band in the world, which will then (of course) play a random song from Rush. 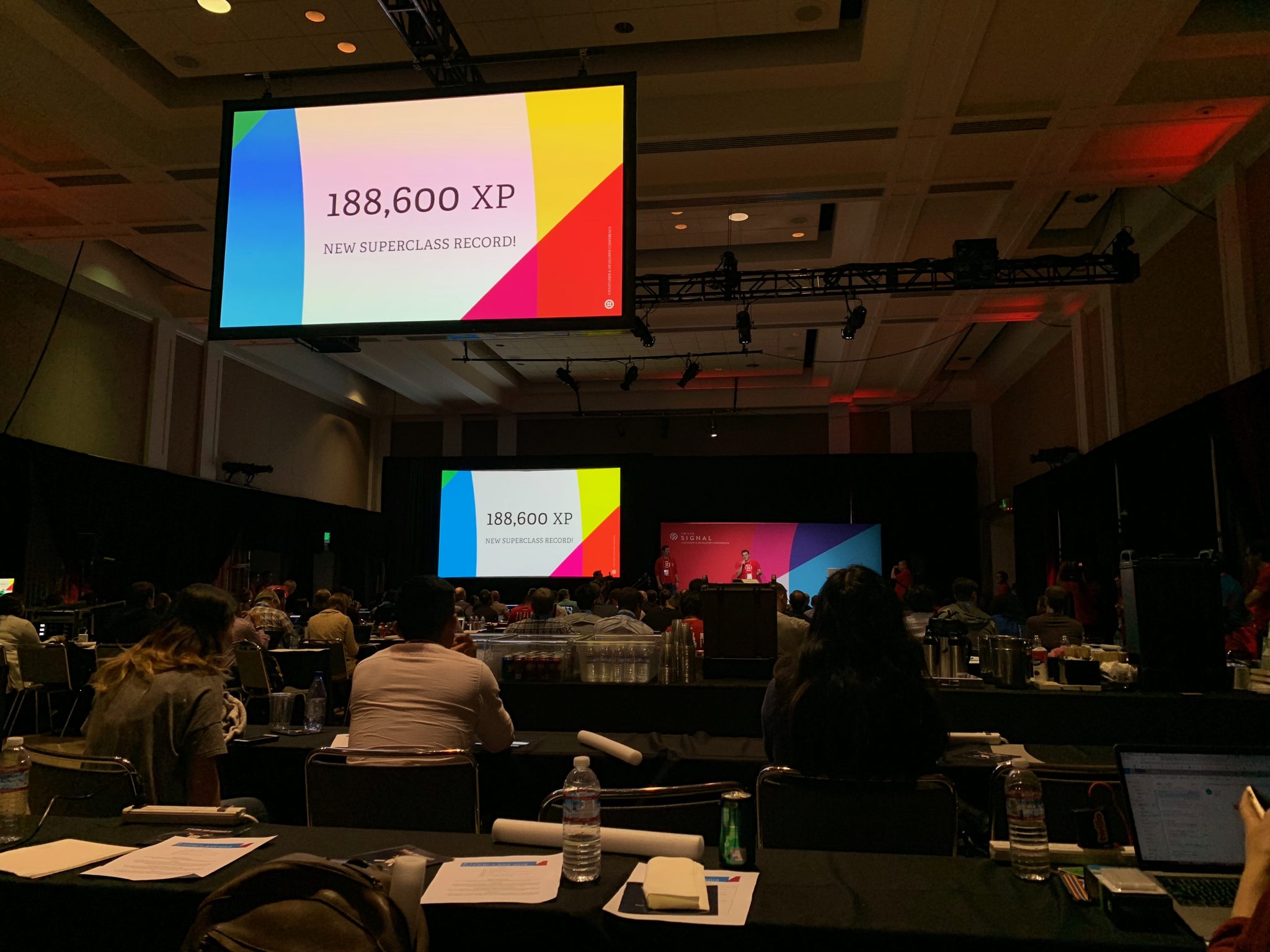 Superclass set a record for number of XP gained in TwilioQuest (I believe it was only the second year for Superclass, not sure if they have it multiple times a year) and several attendees were awarded VR goggles for getting the most points. I was just glad to get a good education…and a T-Shirt.

The Keynotes and Sessions

Perhaps it was because I was checked in a day earlier because of the Superclass, but I felt a bit uninformed about the logistics of the conference. I kept looking for a side-by-side schedule the showed which sessions happened at the same time so I could plan out the path.

The first day Keynote formally introduced Pay (with Stripe founder John Collison on hand), including the fact that Twilio is now PCI compliant. Â Also formally announced (with a great demonstration) was Autopilot (taking a voice order for a skateboarding appointment with date, count and name. The call center app Flex which had been in beta, was also reviewed. The best session of the day for me was on Flex UI Development, where the development demo built a plug-in for Flex to request a break (requestor and supervisor sides).

The second day Keynotes introduced Twilio Narrowband, or NB-IoT, which is targeted at IoT devices don’t need a lot of bandwidth, or are insensitive to latency. A developer kit was available for pickup after the keynote which included Narrowband SIMs, hardware and software dev kits (yes, I picked up one to go along with my small army of RaspberryPIs…a small robot army). There was also a session on Twilio.org, which provides Twilio services to non-profits (something we’ll certainly be researching). They had an app attendees could text to which would remind you of your voting polling place and set up to send you a reminder to vote. The goal was to get a 1,000 voters, and the numbers were close before the presentation was over. 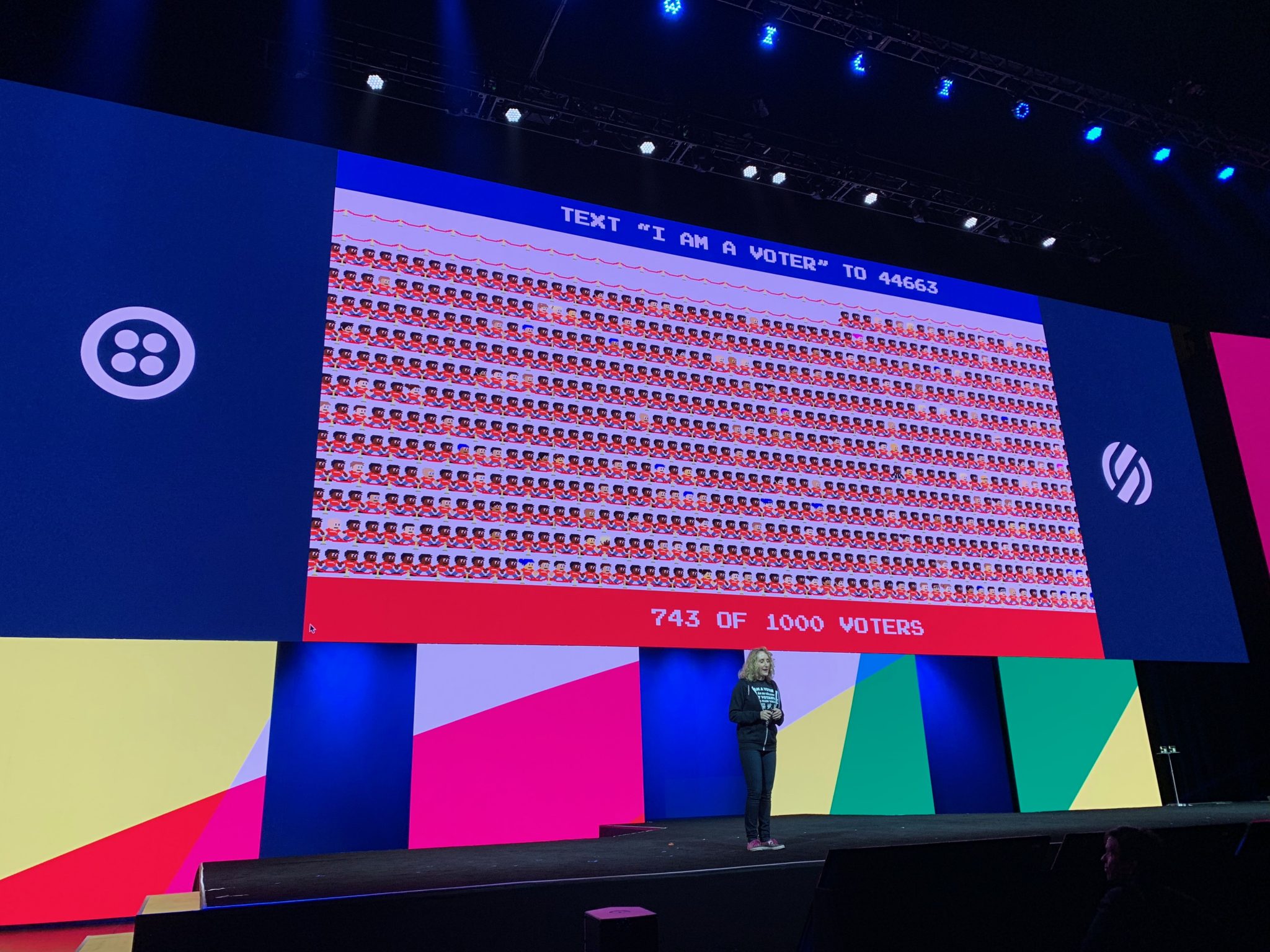 Then came the creation of the “HawkOrNot” app. Skateboarding legend Tony Hawk came on stage, and talked about the times he got mistaken for himself. Jeff Lawson wrote a quick app that could take a texted picture, compare it against an ML (Machine Learning) model made up of lots of Tony Hawk pictures, Â and tell you if you were hanging with the Hawk. 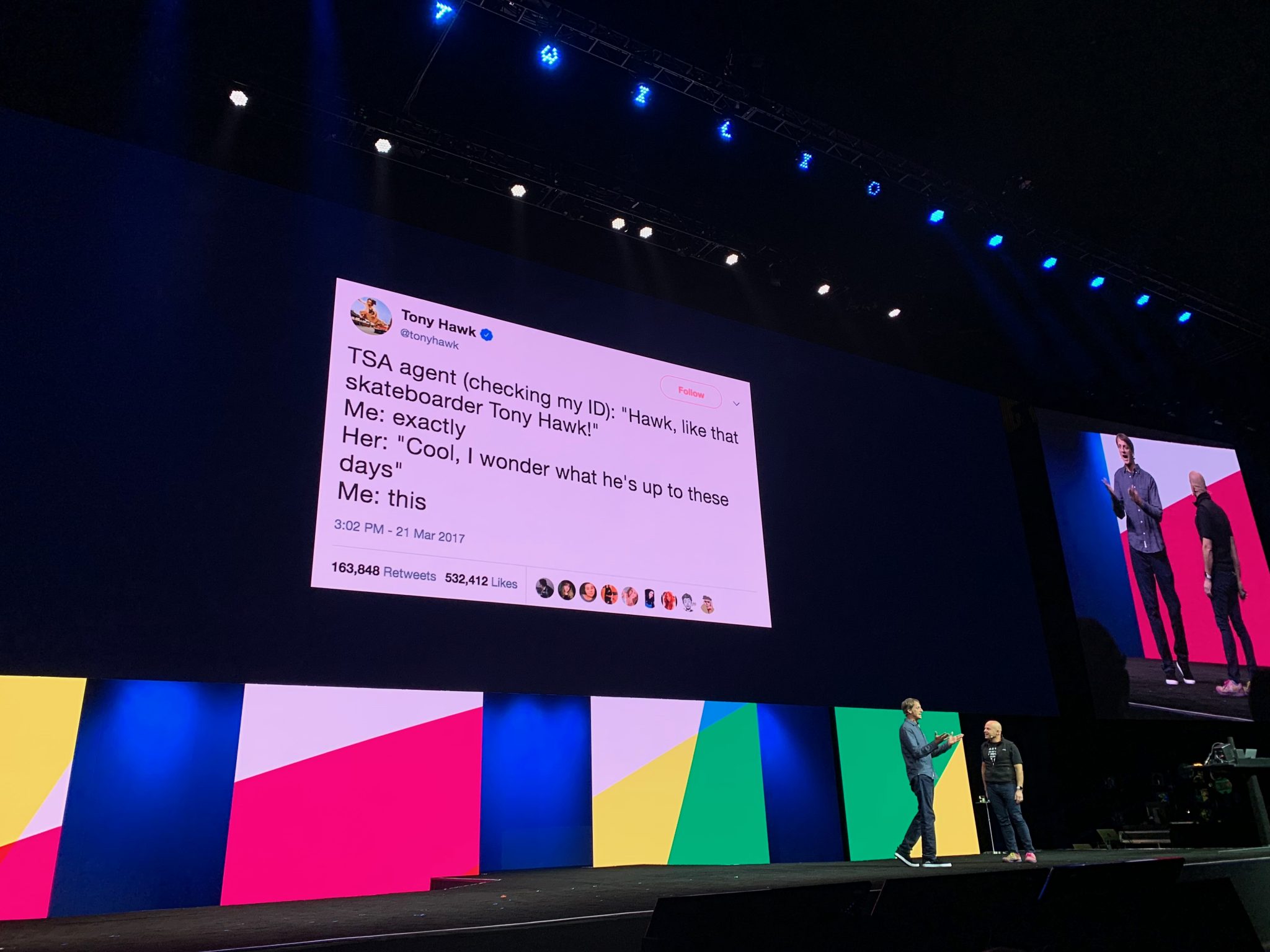 OKGO were the final “speakers” at the Keynote, and while their performance wasn’t educational, it was certainly stimulating. They first performed a song with handbells. 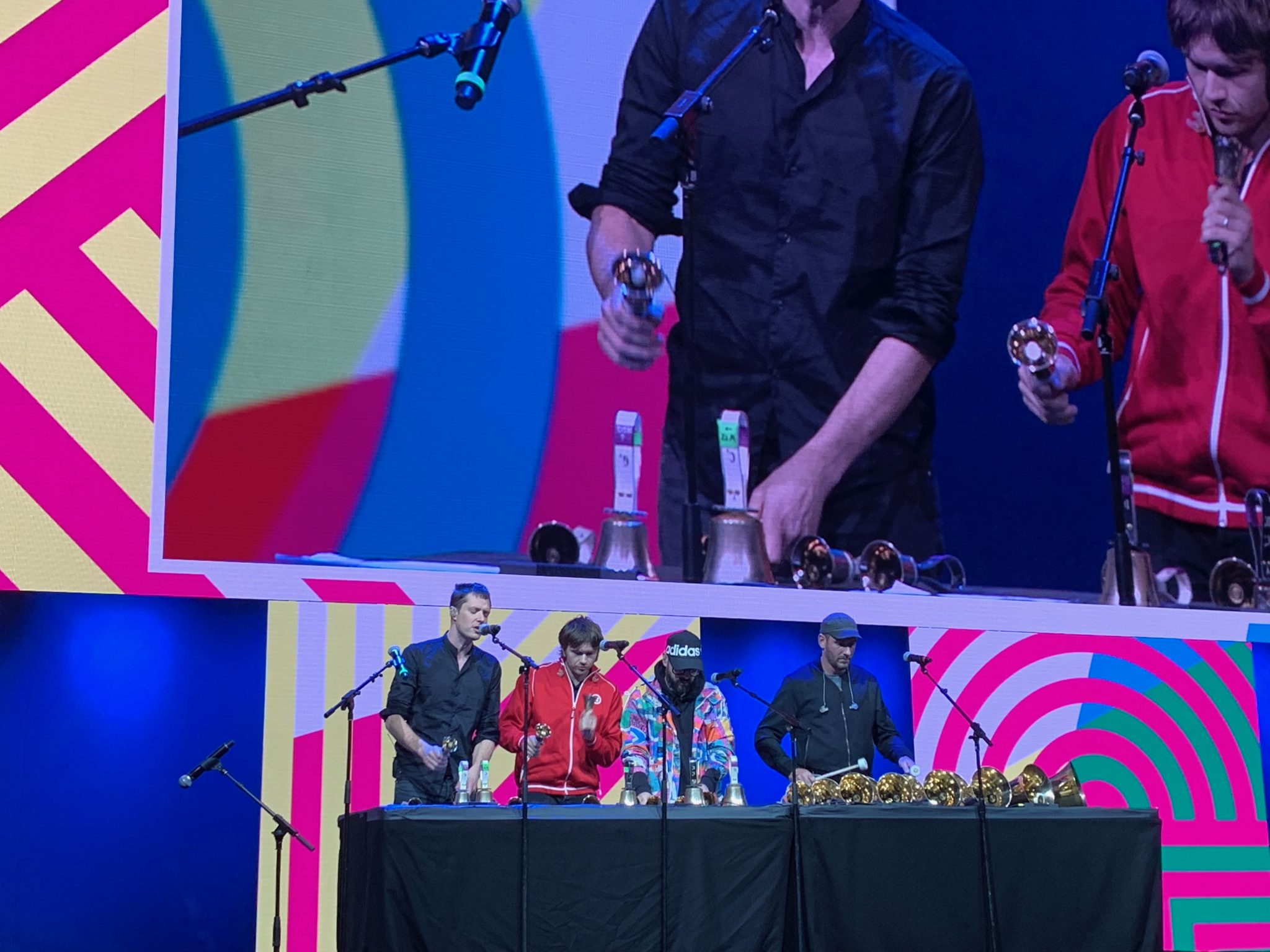 Then all in the audience who had texted their number to a number provided earlier received a phone call. The band had phones on stage that would act like handbells tuned to a certain note, and when they shook them they would play the note on random phones in the audience (they’d had us turn on speaker phones and turn up the volume). After that, a text came to each phone with a link; the link had a web page with a color on the back ground with a circle in the middle and left and right triangles on each side. As you can see in the photo below, as the symbols dropped toward the white line, audience members with that color tapped the symbol to play along. 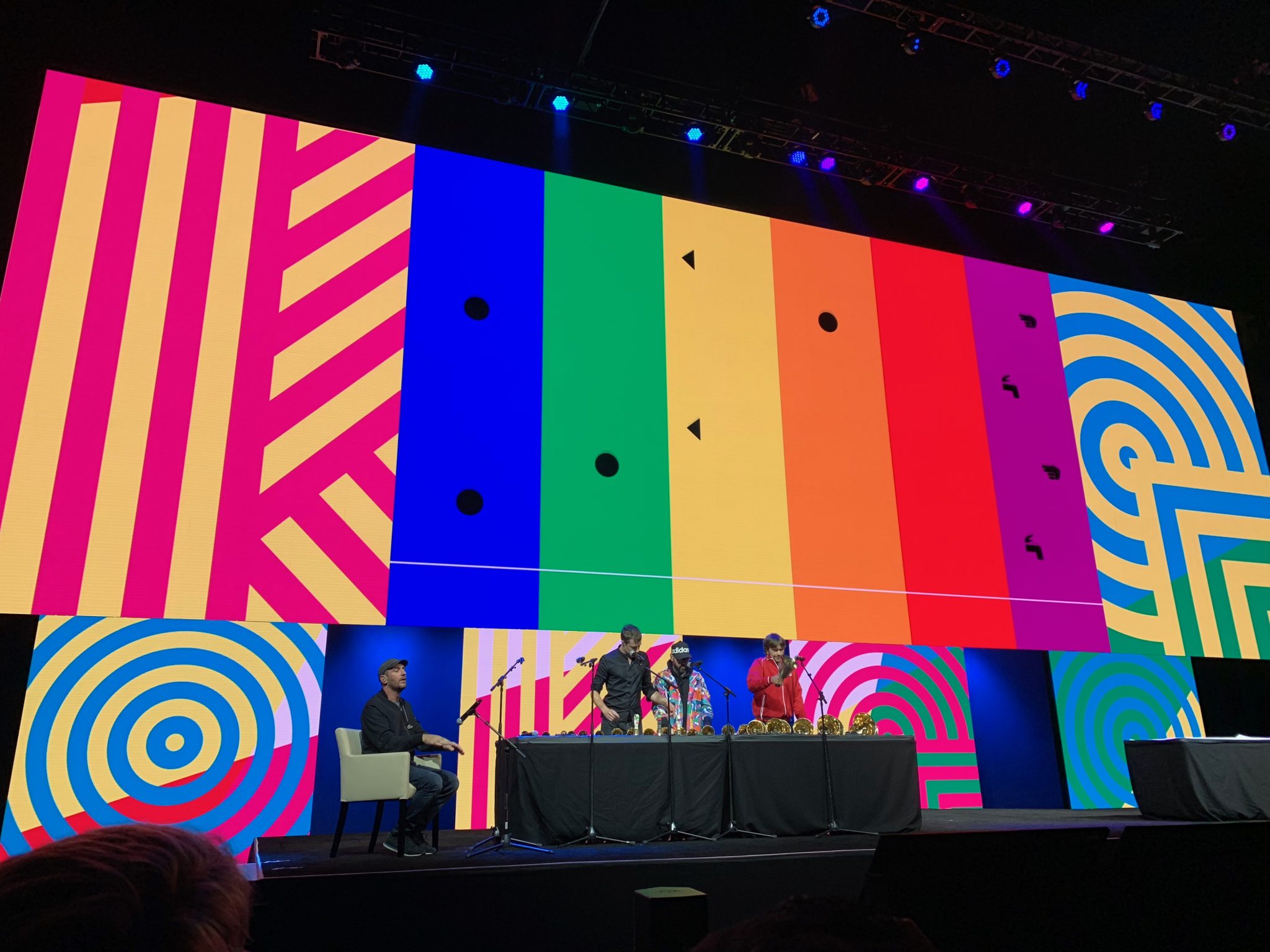 If you didn’t want to do a color, you could do the purple percussion.

Both performances were creative, and a great demonstration of what can be accomplished with voice and text. In my copious spare time (!) I’ll figure out how to use this to play Rush’s 2112.

The HackPack (I got socks)

In the top picture in this article there is a red GameBoy (probably TM) looking device. Each attendee got one of these. Just registering it got points/coins, and various other activities (build a shirt from a text menu, going to sessions, a couple of games, etc.) accumulated Â more points. Some folks must have spent a lot of time with these hackPacks, as the SWAG store had items (like shoes) with a pretty hefty price tag.

I was happy with just a couple of new pairs of designer socks. Do I get paid in more coins for this free advertising?

The Good and Not So Good of Twilio Signal