Notes on the 2017 SXSW Health Tech sessions I attended (some with photos, some with photos of slides from the presenters) in order of relevancy to current projects. The sessions (and links to each if you want to jump down) are:

Screening for Heart Disease with the Apple Watch

No More Apps – Why Reinventing Devices is Key

Dunking on Disparity: Health Tech for All

Health Data: WFT? We’ve been to the Moon, But…!

To Build in Health, Follow the $ Not the Patient

To see notes from other SXSW2017 sessions:

Screening for Heart Disease with the Apple Watch 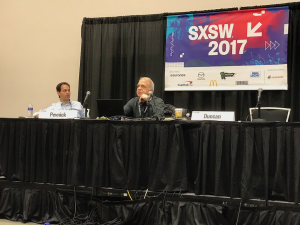 This was an excellently balanced and informative presentation where Dr. Duncan presented the technical perspective and Dr. Pevnick presented the data analytics and research perspective. I took pictures of most of their slides, the pertinent ones are included here.

Cedars Sinai starting allowing patients the option through their patient portal (voluntary)  to link wearable devices and their readings, and integrated those readings into their EPIC EMR system. With little advertising they got up to 2800 patients (out of 130,000 portal users) sending in readings. 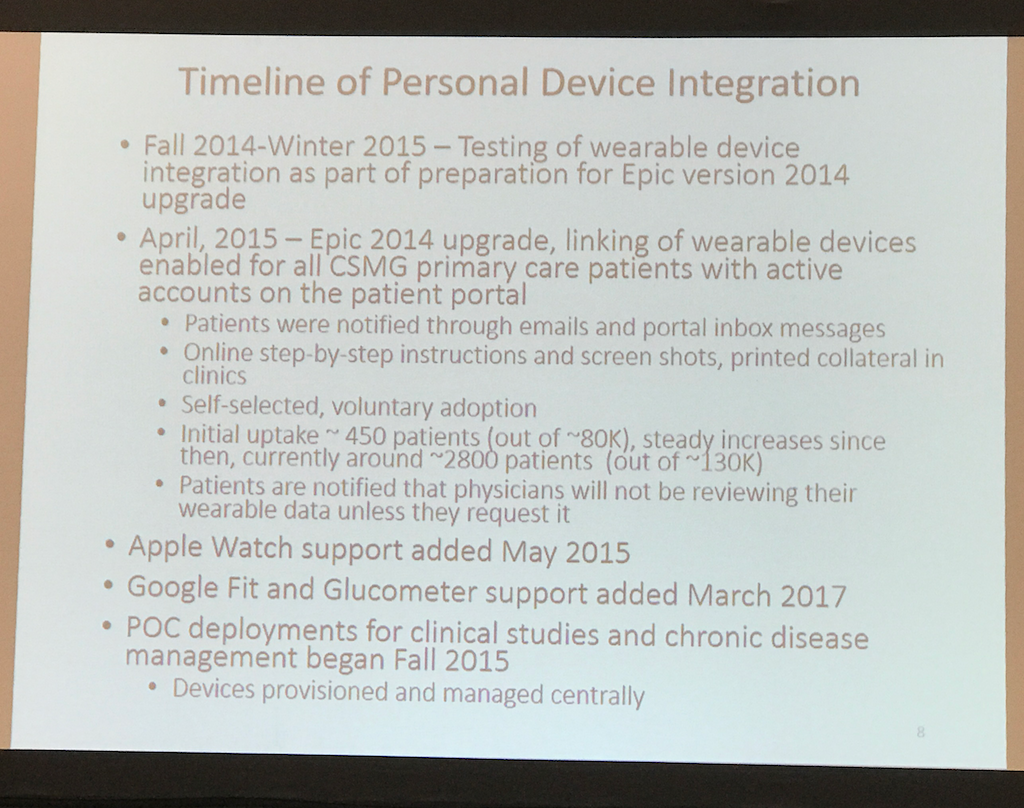 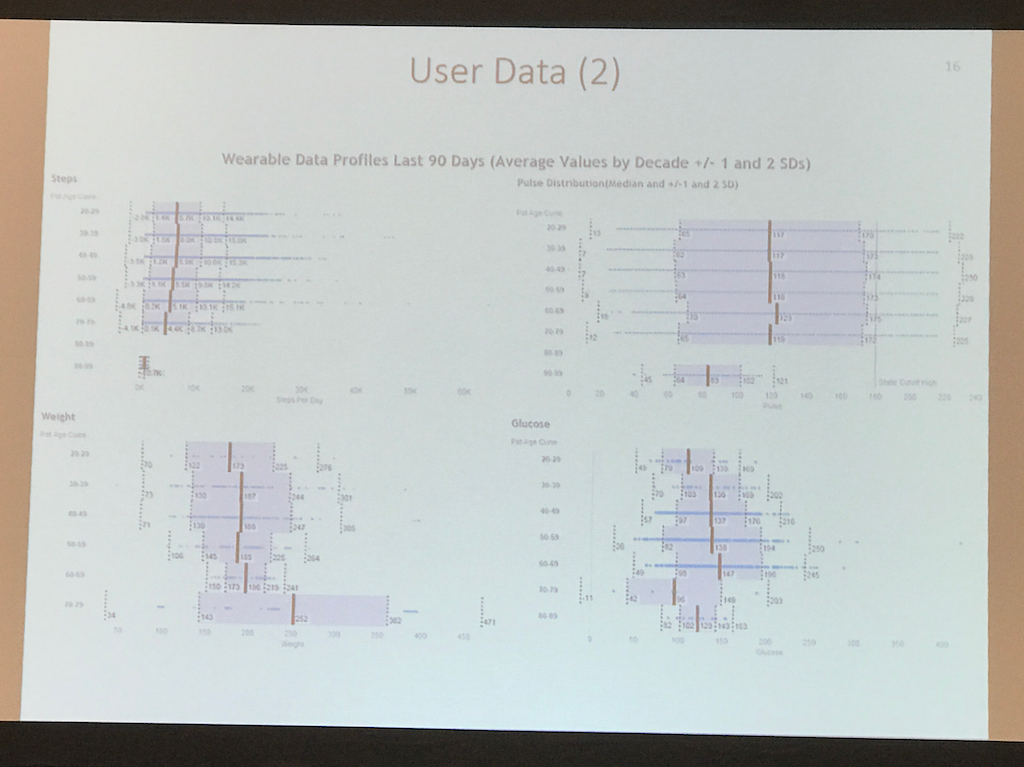 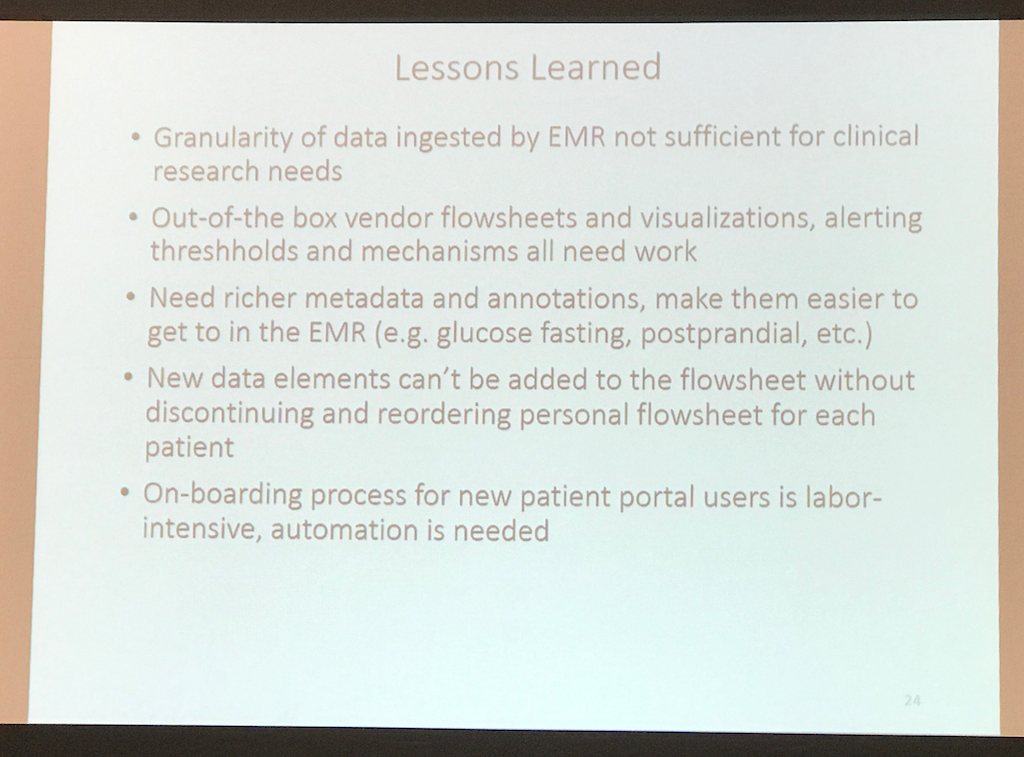 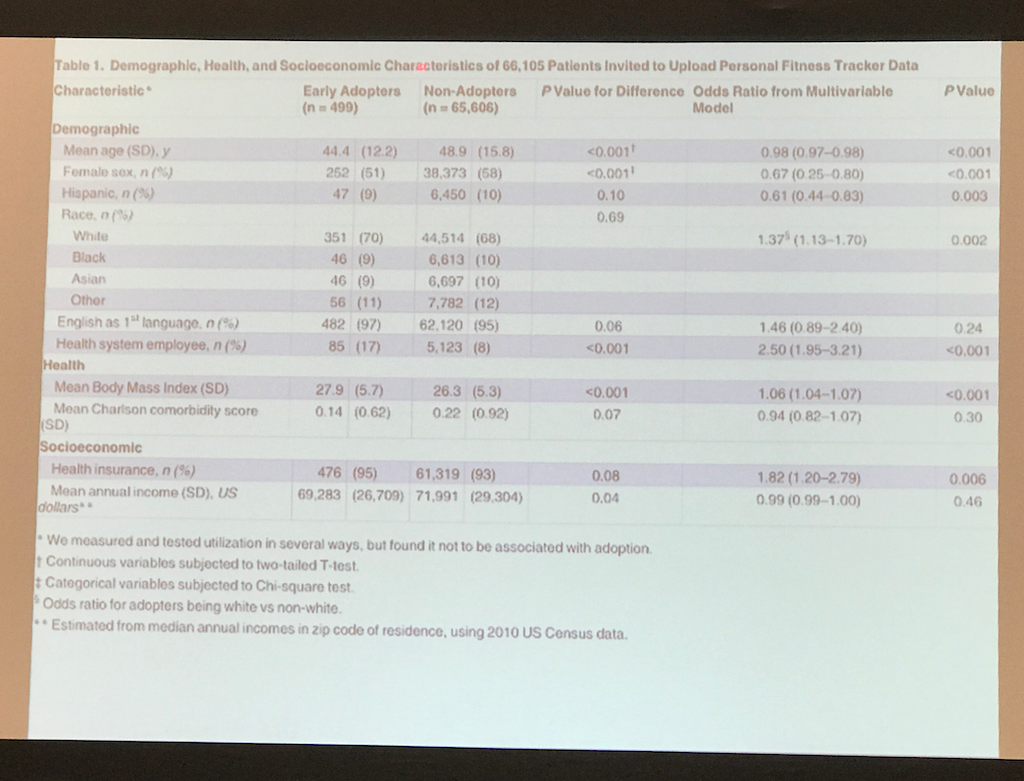 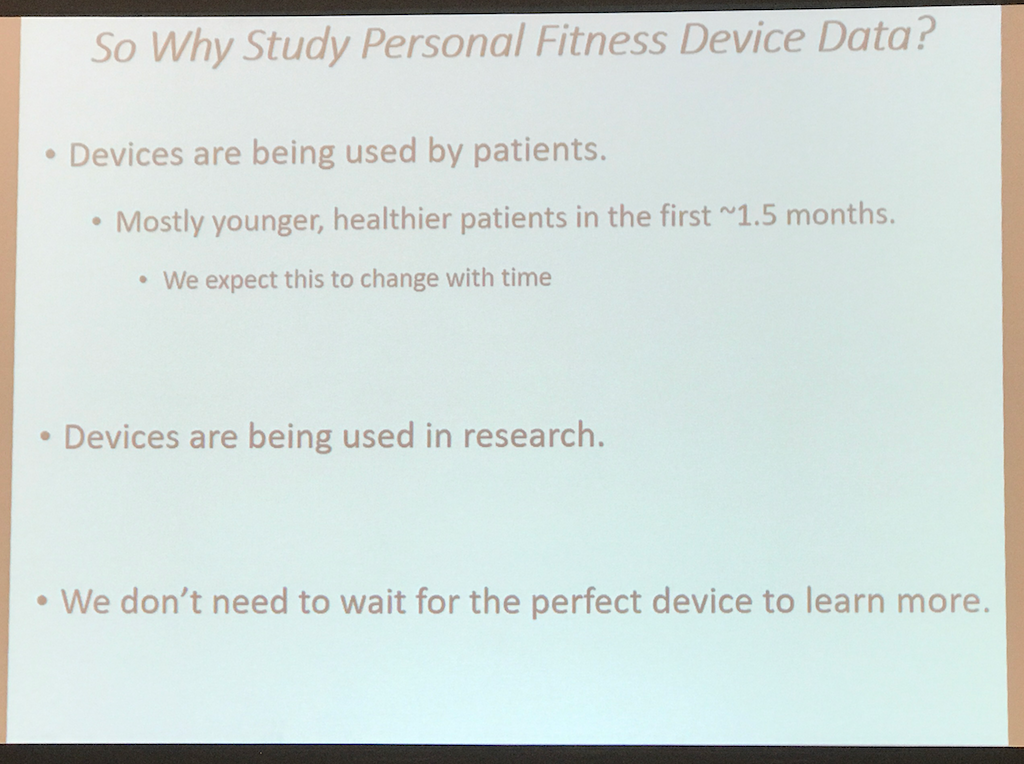 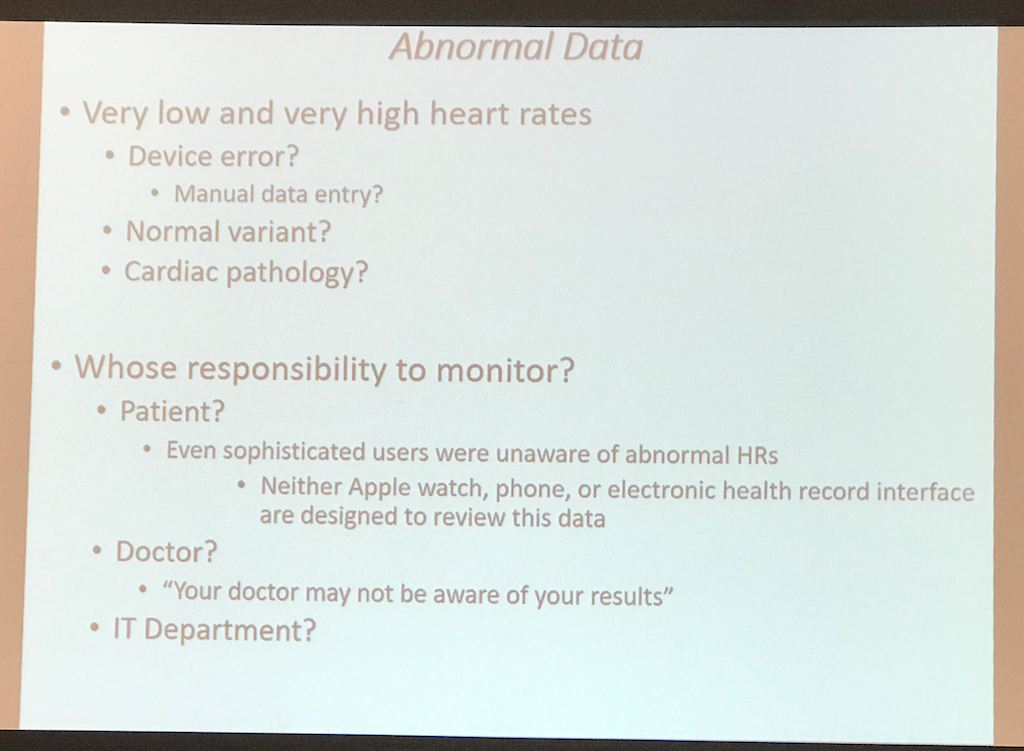 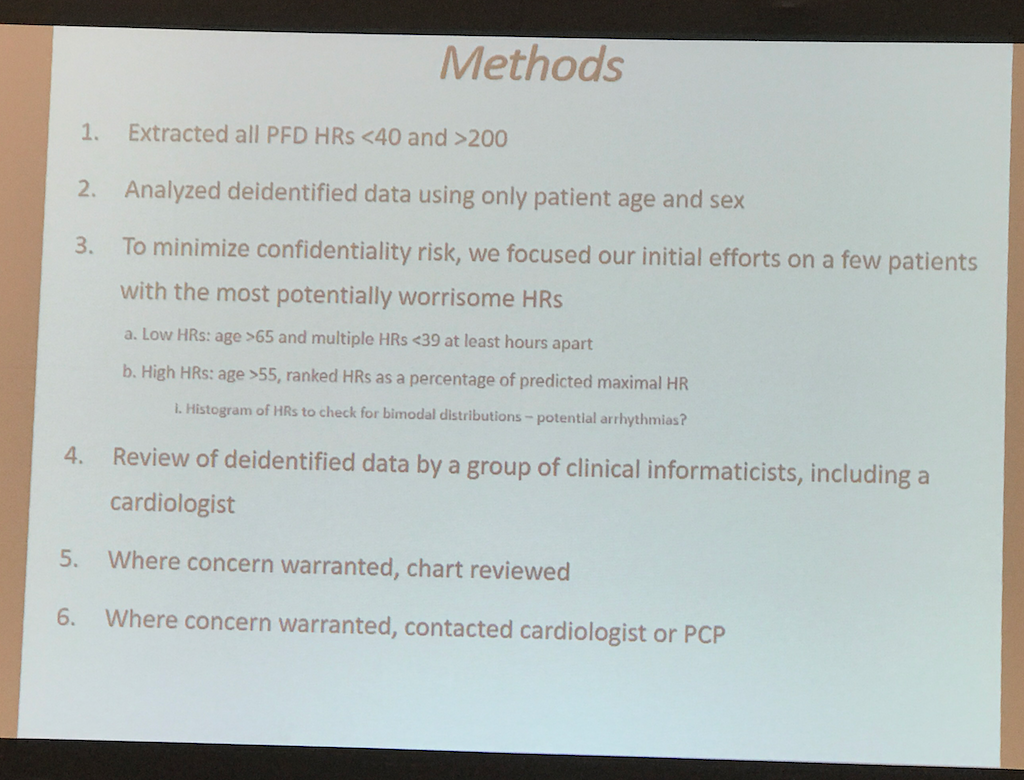 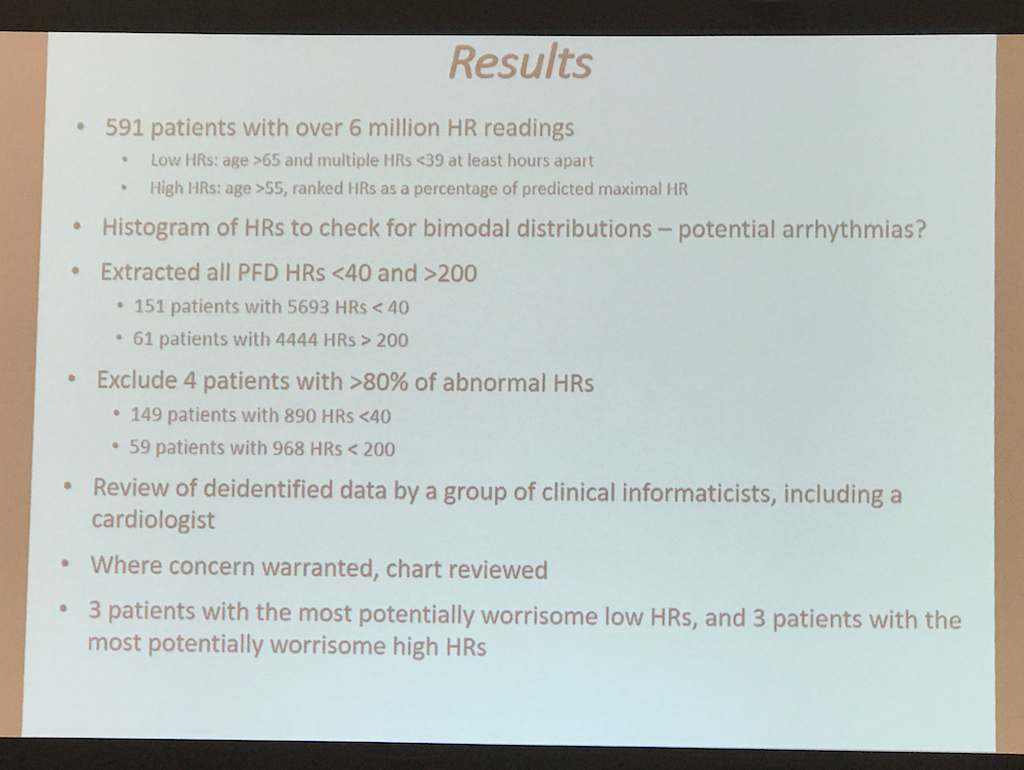 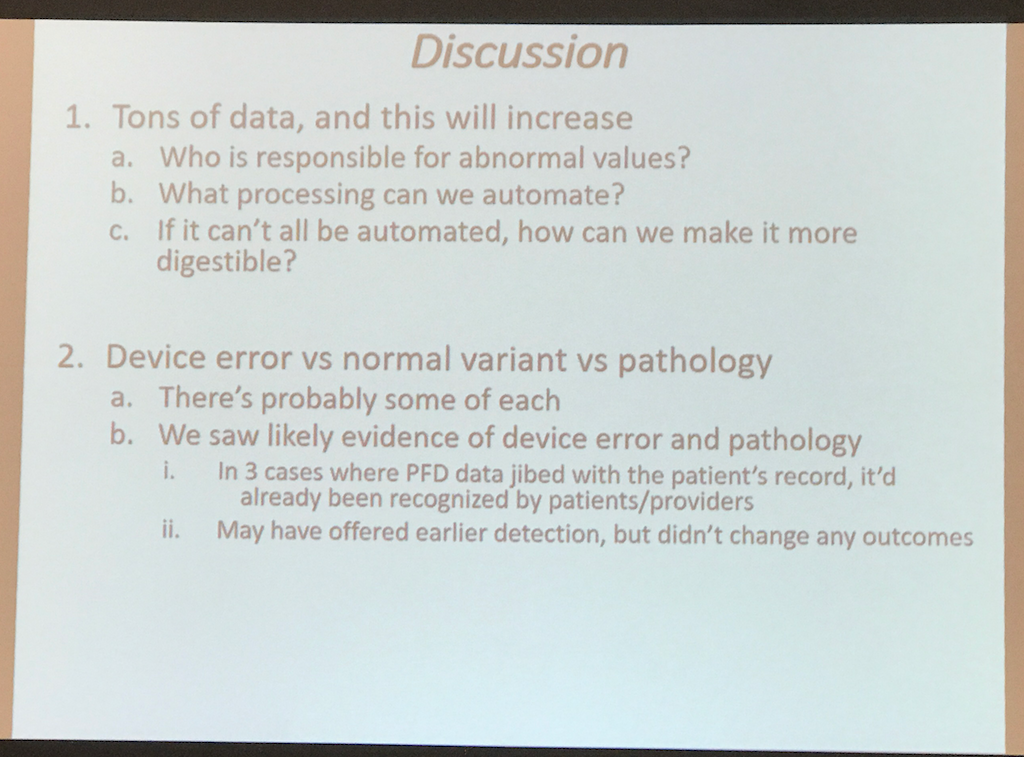 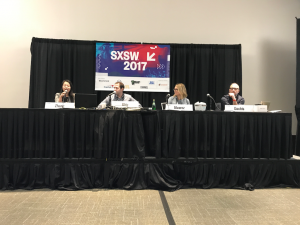 No More Apps – Why Reinventing Devices is Key

An interesting session title, especially given that two of the panelists with devices also had apps that were critical to their devices. The incongruity was somewhat rectified by the discussion that the focus was on the device, as opposed to YAAS (Yet Another App Syndrome, my acronym). 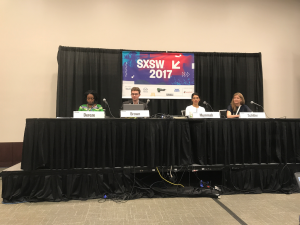 I could have elected to wait in the two lines for Joe Biden (one for wrist bands, one to get in) and his cancer moonshot discussion. And, as I found out later, I also could have fanboyed out and found the Game of Thrones session (which I wasn’t aware of) which was right new door to Biden (apparently).

But the statistics and perspectives presented in this SXSW Health Tech session were a reminder of the size of the problems of diabetes and pre-diabetes. 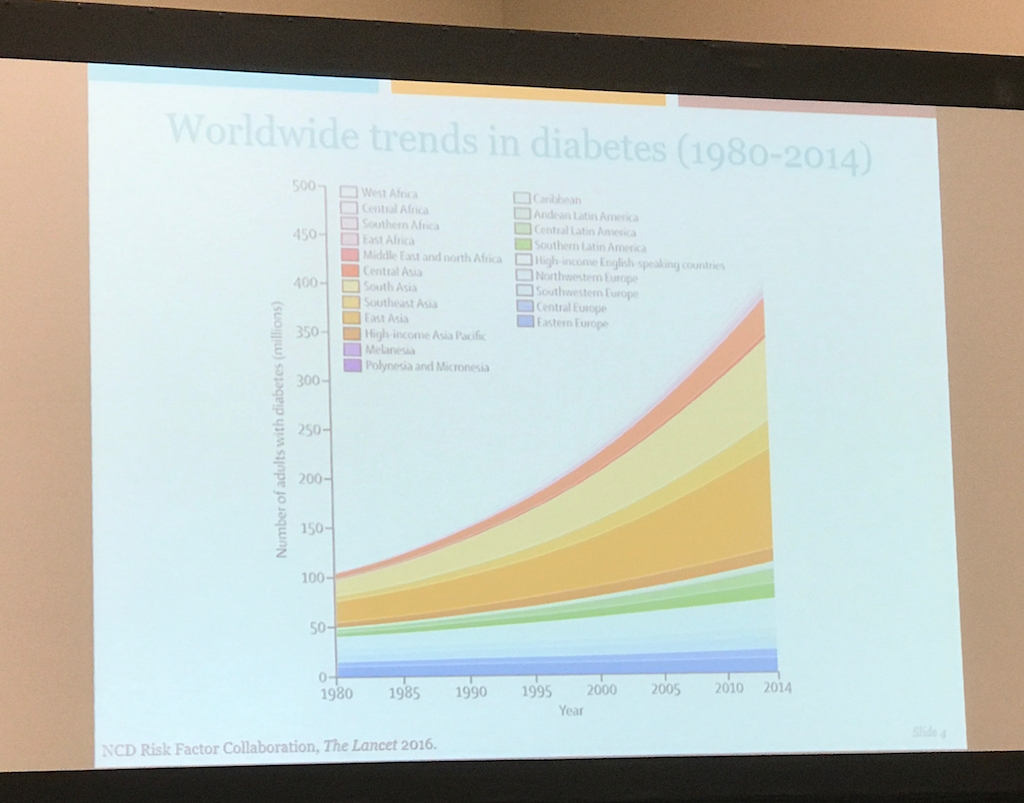 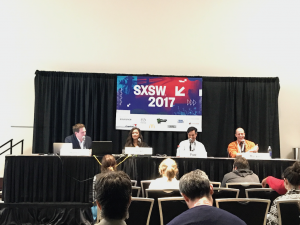 Dunking on Disparity: Health Tech for All

This was a Texas focused session, which featured using technology to reach all Texans. Statistics were presented about smartphone penetration (e.g., there almost everywhere) and the app called “Choose Healthier“, a collaboration between It’s Time Texas and the Dell Children’s Medical Center was introduced. It initially contained events and location information for in and around Austin at the time of the presentation.

The slide below shows stats from a PEW on smartphone penetration from 2016. The point of the panel was that apps could be delivered to all people regardless of income level or demographic factors. 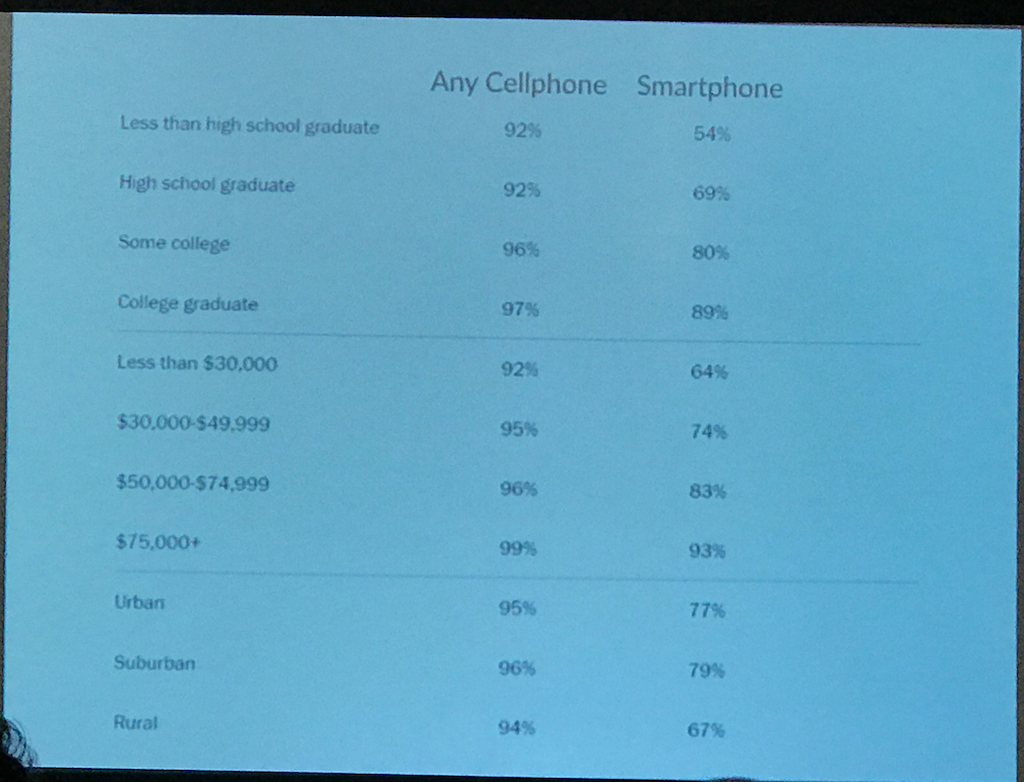 Health Data: WFT? We’ve been to the Moon, But…! 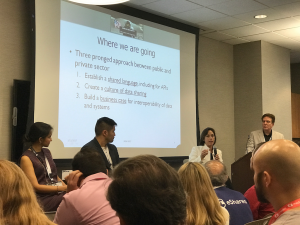 This is the session where I got stuck in an elevator on the way up to the Austin Chamber of Commerce. Lovely! Apparently this is the only way to get up to the chamber of commerce. We weren’t in there for longer than ten minutes, and since it was raining out it wasn’t too steamy…just another bit of excitement at SXSW.

This panel had an interesting mix of local and national perspectives, all of whom agreed that data collection is hard but data integration is harder. One of the best slides was one I got a mostly crappy photo of (if you get stuck in an elevator you don’t have the best choice of seats, or so I found out). But it talks about the amount of money that is invested in segments of healthcare that create or utilize data…versus integrating or sharing it. That slide is below. 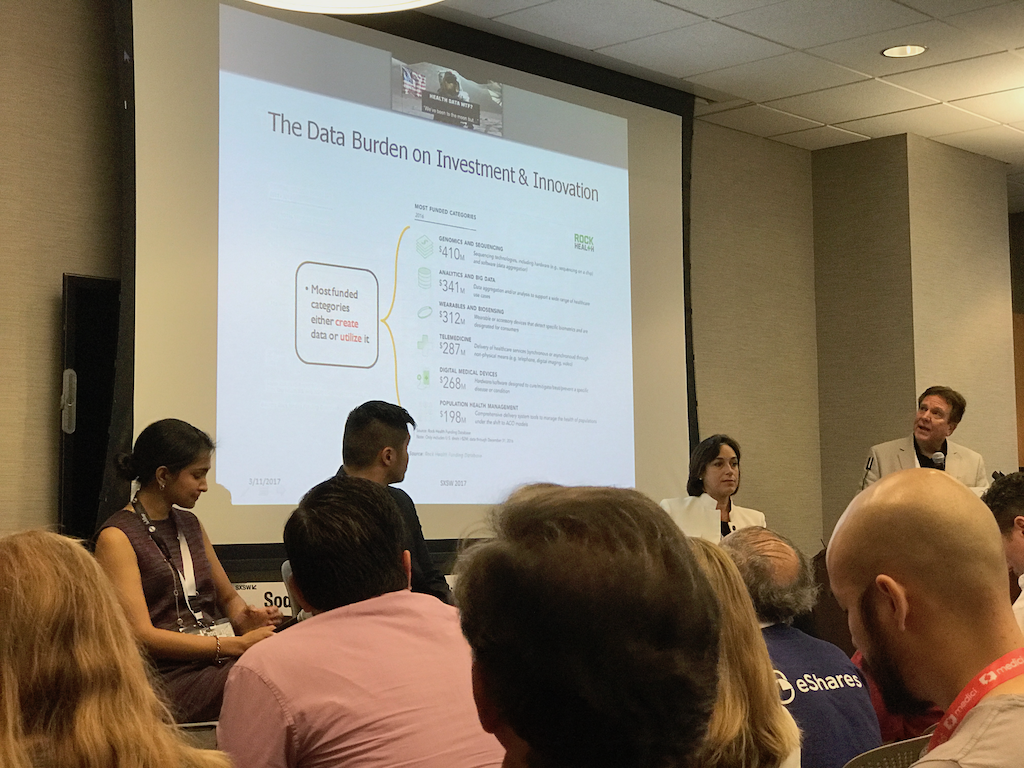 Karen DeSalvo, the former director of the ONC, shared the goals of data and system integration between the public and private sector. Little discussion on what would happen with these goals with the new administration. 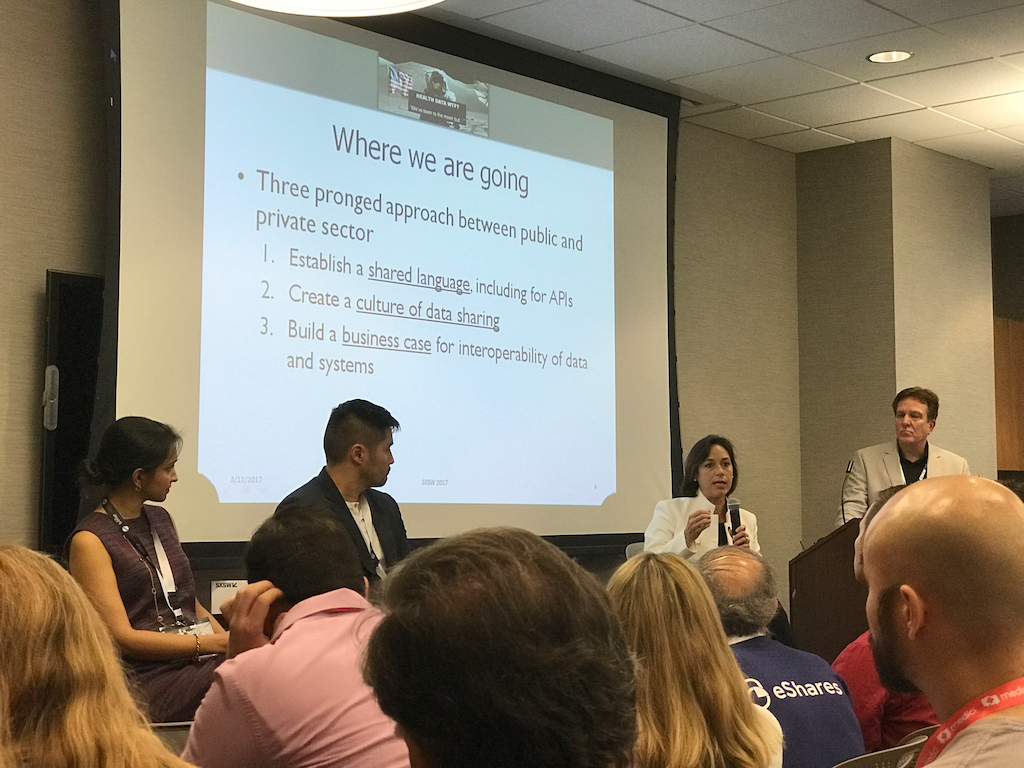 At this panel, Brian Baum introduced Connected Health Austin, a local initiative. There was discussion on defined data communities within Austin, and all they “solve the same problem differently everywhere” followed by discussion on how Connected-Health Austin would be different in this regard. I heard of several of these type initiatives in Austin during SXSW, hopefully they will all inter-connect. 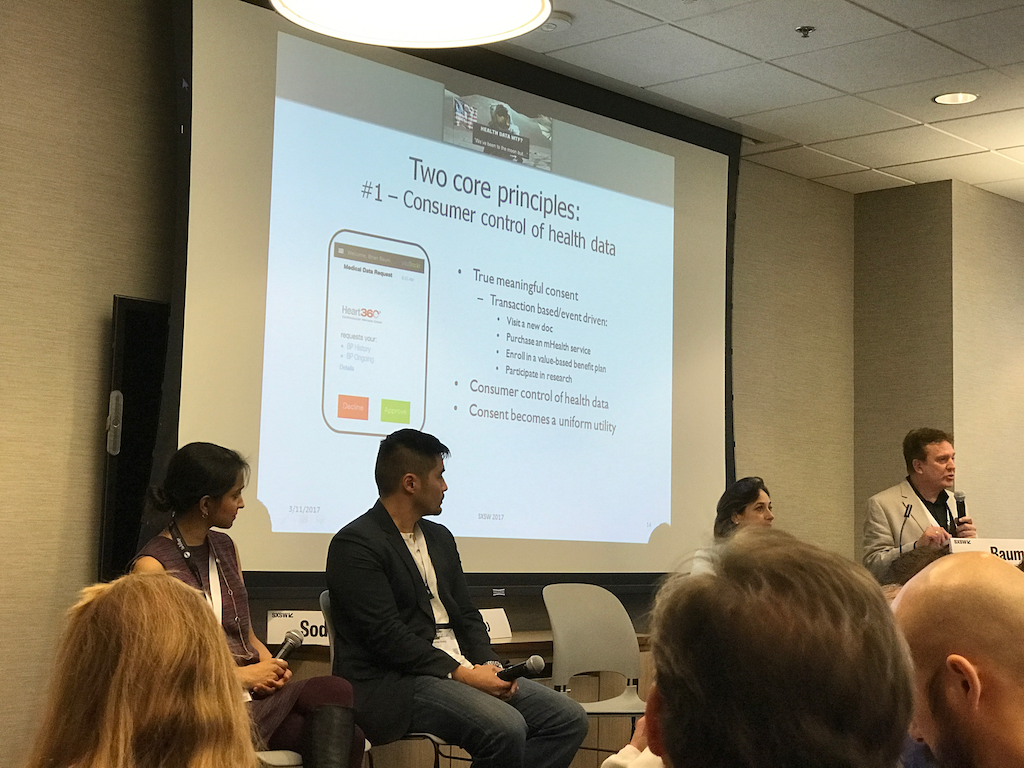 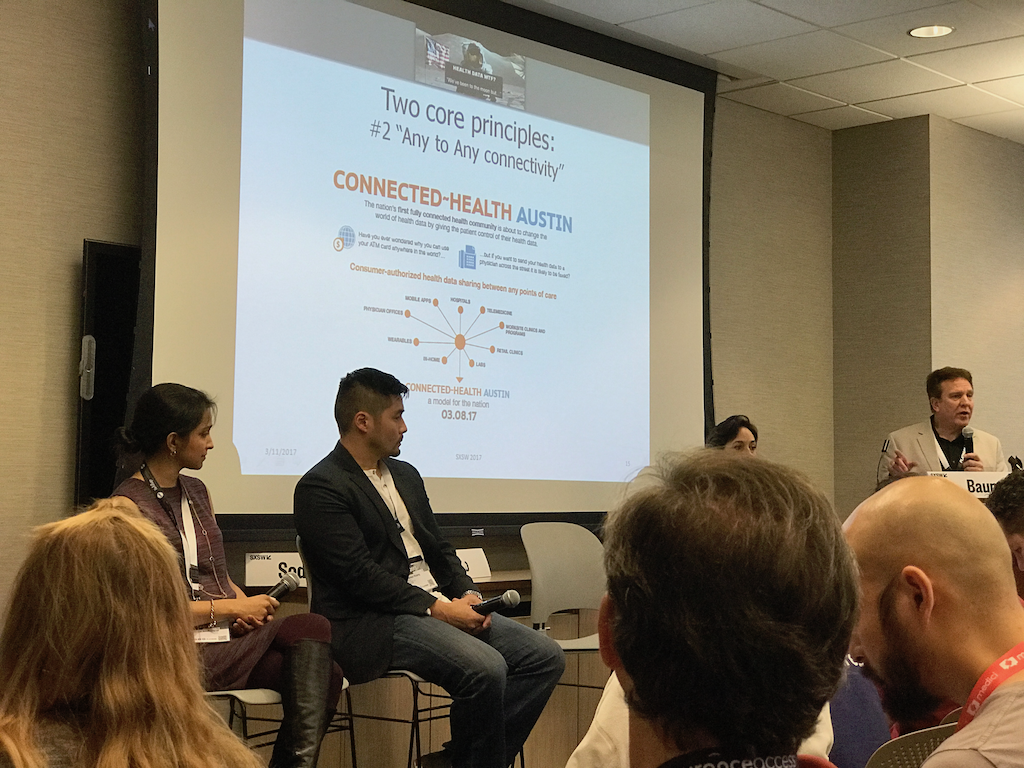 To Build in Health, Follow the $ Not the Patient

The focus here was on providing advice for starting a company in the health tech sector.