SXSW2017 Bruce Sterling – notes from his customary keynote at the end of the Interactive portion of SXSW titled “The Future: History that hasn’t Happened Yet.” 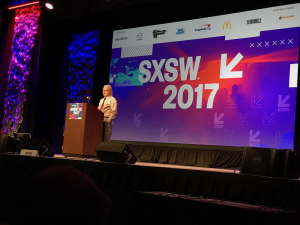 Some quotes from Sterling’s recap:

“Every year I appear, I’m like ‘wanna know about the future, climate’s changing.’ And every next year I come back, and it’s worse. CO2 this year, out the roof. There will be hell to pay.”

I haven’t been able to find a posted video of the talk, but there is an audio recording at Soundcloud.

The topic Mr. Sterling chose to be of interest this year was Universal Basic Income. It’s got an acronym – UBI.

He reviewed other times in history when cultural change has frightened people into thinking jobs are going away (e.g., the industrial revolution) but, as he says “people don’t just stand around….people just pickup, and life kind of proceeds diagonally.”

UBI might get support from the polarized left and right…for different reasons.

He noted that we’d done this kind of thing before, “if it happens, it will be like previous historical human arrangements.”

I believe I captured his list, which is classified as in order from worst possible outcome to least harmful (which Sterling says is always the best way…”like going to gym first thing in the morning…it’s painful, but it’s the worst thing that will happen to you all day.”

It is possible that a UBI solution is completely new and bizarre and totally revolutionary and not something from human history.

“We’re so inventive that we’ve got no use for ourselves. We’re making ourselves obsolete.” If you said that to people 100,200 or 400 years ago, would they congratulate us?” They would probably question why they are defaulting our future to robots and AI? They are not historical participants.

“If humanity declared itself useless and we all vanished, our machines would stop.” Long discussion about machines having no ambition or appetite. Sterling is obviously not on the side of AI taking over the world.

“When we say our machines can render us irrelevant, we are buying into a suicidal ideology.” His basic concept here is the UBI concept is humanity bailing out on its responsibility, leaving running the world to machines.

I tried to find videos of Mr. Sterling’s other closing keynotes so I could keep them all in one place. Here’s what I’ve found: