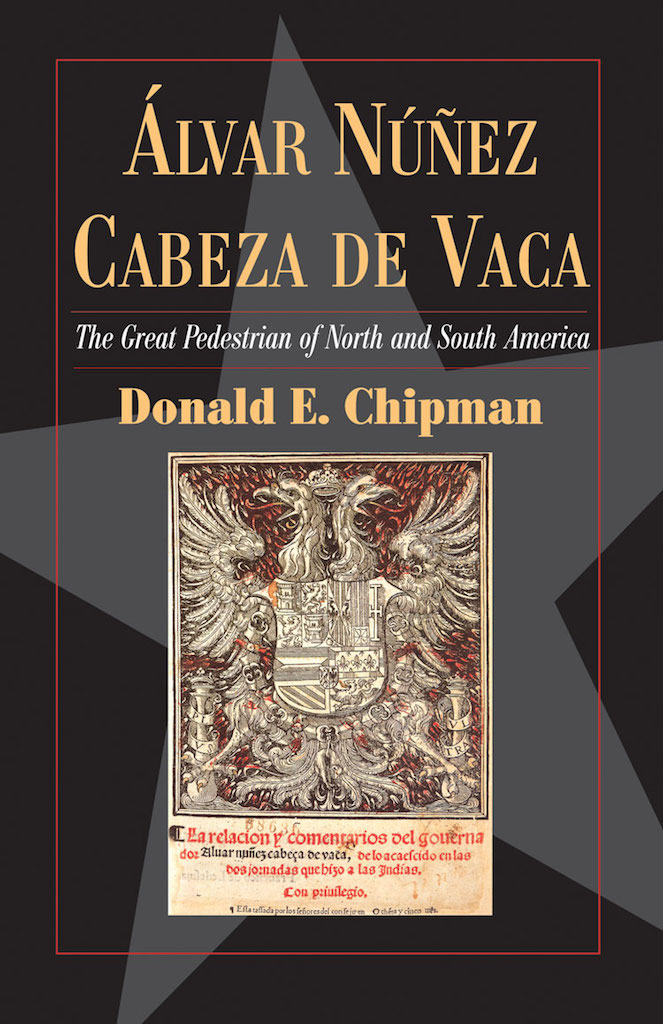 The subtitle of this book on Cabeza de Vaca says it all. From the summary on the back cover:

And, after that, he walked about 1,200 miles in South America as well.

This book is part of the Texas State Historical Association’s (TSHA) Fred Rider Cotten Popular History Series, which is a series of short books about certain events, people, cities, places or other items in Texas History. The book on Cabaza de Vaca is 60 pages long.

From the description in this book, de Vaca’s travels can be broken into the following segments, each one an amazing journey by itself:

De Vaca left Spain (Sanlúcar de Barrmeda) on June 17, 1527 and arrived in Española sometime in August. The expedition spent time in the various islands, some of it encountering and hiding from inclement weather. They left for Florida from Cuba (part of the Narváez expedition) late February or early March of 1528 and arrived on the West Florida coast on April 15, 1528.

About 300 men left the Tampa area about May 1, 1528 and reached the Florida panhandle near Indian Pass in August. This trip was about 1,500 miles, and according to records that had some horses (those that survived the boat ride over).

By raft from the Florida panhandle to near Galveston, Texas

When no rescue from their boat was forthcoming, the remaining members built five rafts and set off on September 22, 1528. The skirted the coats, landing and encountering various indians, and finally de Vaca’s raft reached some island near Galveston on November 6, 1528. Only he and 45 others were still alive. The other rafts reached shore as well, but disease and indians would kill most of them.

By foot from Galveston through Texas, into Mexico and to north western Mexico

Initially as a trader (for about three years), then as a captive (much of the time from autumn 1532 to the first few months of 1535), and eventually as an escapist and healer, de Vaca went through south Texas, down to Mexico, then north across the Rio Granda briefly and down to the coast in the northwest part of Mexico. They finally found other Spaniards in the spring of 1536.

By foot and horse to Mexico City

Cabeza de Vaca and his companions arrived in Mexico City on July 23, 1536, slightly more than seven and a half years after touching Texas soil, and 2,400 miles from where they had fled their indian captors in Texas.

By boat back to Spain

De Vaca sailed from Veracruz, Mexico April 10, 1537 and, after a stop in Cuba, arrived in Lisbon, Portugal on August 9.

By boat from Spain to South American

De Vaca sailed from Cádiz December 2, 1540 and arrived at Santa Catalina Island off the coast of Brazil on March 29, 1541. De Vaca had been appointed governor and military captain of Rio de la Plata.

By foot from the island to Asuncion, Paraguay

Instead of going by boat down to Buenos Aires and sailing up river, de Vaca decided to march from the short near Santa Catalina Inland to Asunción. From October 18, 1541 to March 11, 1542, he marched the 1,200 miles to get there…on foot.

By boat, Cabeza de Vaca goes back to Spain for the last time

Apparently over-thrown and jailed from April 15, 1544 to March 7, 1545 because of his laws and leniency towards the natives (and no doubt other disagreements), Cabeza de Vaca once again marched back to the ocean and took a boat back to Spain. He was tried, found guilty and then petitioned and won a lesser sentence.

The book is an excellent summary of his journey (find it on Amazon here). Full disclosure: I was given this book by the TSHA, as our JoSara MeDia team is working to turn this into an audio book (see other TSHA audio books here).

The Battle of the Alamo by Ben H. Proctor

Texas and the Mexican War by Charles M. Robinson III