District 9 – Four movies in one

Watching District 9 with my 18 year old this weekend 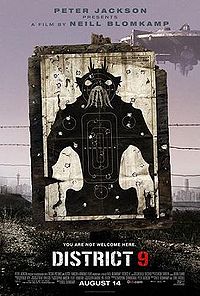 and observing how is interest level changed made us realize that the movie is four movies in one. He was interested in some parts, bored in others and excited/laughing in others.

An alien ship stalls out of Johannesburg. The aliens are rescued from the ship, and, 20 years later, they are in a slum called District 9. Tension with the locals incites a movement to relocate them out of the city (to the cleverly named District 10)

Somewhat set up for a sequel, but an enjoyable movie.

The Social Network vs. Zombieland SMACKDOWN