With all of the retro cool analog phone sets and other low-tech gear on Battlestar Galactica, FTL (faster than light) drive not withstanding I was beginning to get the impression that the whole thing ran on vacuum tubes, that maybe some EMP (electromagnetic pulse for you non-geeks) had fried all of the circuity that runs computers. 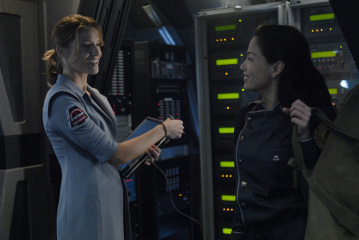 But, behold, Gina Six (Tricia Helfer) and Kendra Shaw (Stephanie Jacobsen), as they work to replace (or in Gina’s case, hack) Pegasus’ network. It ain’t a rack of Cisco Catalyst routers, but it looks more than capable to connect those phones and keep bits flying through Pegasus.

As a security professional, I was shocked, nay, dismayed, when young Ms. Shaw gave her security code to the under-privileged Gina. And just because she was sleeping with Admiral Cain. Gives social hacking a bad name.

geek job #e squared: the writer of this check and the one who figures the amount to cash it