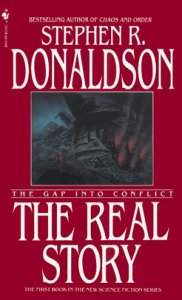 Reading a complete series from cover to cover in consecutive sittings (i.e., without many books in between) is a rarity for me. Either the series doesn’t hold my attention, the series is unfinished (i.e., I’d read George R. R. Martin’s Ice and Fire series straight through if they were all written and published) or something else gets in the way. The exception is the five book Gap Cycle by Stephen R. Donaldson.

I read the five book in the Gap Cycle series almost straight through, and truly enjoyed the series. The five books are:

I’d read The Chronicles of Thomas Covenant when it first came out years ago, and had picked up the first book in the Gap Cycle series (The Real Story) because I enjoyed the Covenant fantasy series; for a variety of reasons, though I made several attempts read The Real Story, I could not get interested in it; it truly is separate from the rest of the series, as it does not cover the alien Amnion and the political structure and struggle back on earth, plus it focuses on some unpleasant topics (rape, forced surgeries, etc.) that don’t make for enjoyable reading.

But this first book sets two of the main characters (Morn Hyland and Angus Thermopyle) excellently, and introduces their relationship to the third (Nick Sucorsco).

Many space and world building authors wave magic wands, ask for a suspension of belief or generally don’t explain how their worlds work. Stephen R. Donaldson lays out the background of his world with great inserts of the science and politics he is postulating, in the form of “Ancillary Documentation” chapters.