Our unofficial rating of the 2008 Super Hero flicks

We’ll update once Batman hits the screen, but the arguments have gotten spirited and somewhat philosophical about the rating of the rash of Super Hero flicks this summer.

Therefore, to at least get to a rating system we can all agree on, we present the following matrix (TBD’s/???’s will be filled in as the arguments are finalized and the movies released): 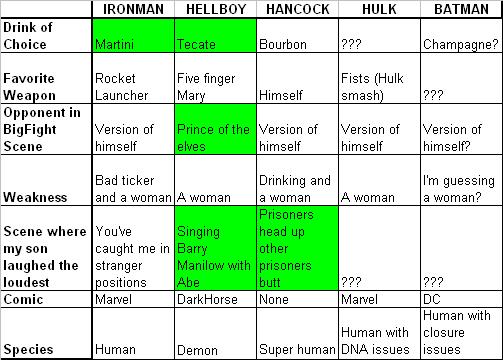 From our list, so far Hellboy is the leading movie of the summer. If I would have had a category for Cuban Cigars, he would have won in a landslide. Tecate, five-fingered Mary and singing Barry Manilow with Abe Sapien is a difficult trio to compete with, plus the fact that all of the other movies have the super hero’s main battle with something that is similar to himself (Iron Man fights a bigger Iron Man, Hulk fights a GI Joe turned hulkish, Hancock fights someone with similar powers (no spoilers) and Batman fights Joker (in a movie set to show how much they are alike)).

Hancock almost won simply because of the prison scene described in the rating matrix, but even my teenage son (who could be heard laughing the loudest at that particular piece of classic moviedom) put Hellboy and Iron Man over Hancock (the ending was mostly lame).

I know the first argument is going to be the Hulk and Batman are not meant to be amusing, so it is doubtful they will get a decent entry in this splendid matrix.

We were going to include a category for “Setup the sequel” but heck, this is Hollywood, they ALWAYS set up the sequel.