Who watches the Watchmen

My wife asked me why I was reading a comic book. Watchmen by Alan 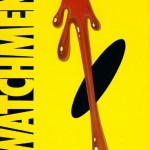 Moore and Dave Gibbons is by definition a comic book, and it is much more. I was looking forward to the movie adaptation, but frankly I do not see how they can do this excellent story justice.

It is a story of ordinary people putting on costumes to be masked vigilantes, of one physicist in a lab accident who becomes the worlds only creature with true super powers, and of a world continuing to fight and destroy itself, heading toward an impending apocalypse.  The story lines take place in an alternate history of the world, where the US wins in Vietnam and get closer to nuclear war with Russia.

The story opens with the investigation of the murder of Edward Blake by the police. Public opinion has turned against the costumed “vigilantes” and most have retired. The remaining active ones are: Jon/Dr. Manhattan, whose physics lab accident turned him into a create that can manipulate space and time; Rorschach, who wears a mask whose black images move, a man who refused to stop his vigilante activities; and The Comedian, who along with Jon is employed by the US Government to tip the balance of power in their favor (i.e., Jon helps win the war in Vietnam). Rorschach figures out that the murdered Blake was The Comedian, and believes that someone is setting out to kill all of the masked vigilantes. He sets out to warn Nite Owl (who took over from the original Nite Owl on his retirement and subsequent ‘tell-all’ book about the first wave of masked heroes), Silk Spectre (whose mother was the original Silk Spectre, who married her agent who was promoting the original group of heroes) and Adrian Veidt, the so-called smartest man in the world, now a very successful businessman. Rorschach is ultimately framed for murder, an attempt is made on Veidt’s life and Jon/Dr. Manhattan is accused of causing cancer, and heads to Mars. Thinking there is something to Rorschach’s theory, Nite Owl and Silk Spectre get together, put their costumes back on and bust Rorschach out of jail. Together they begin to track down who is behind this conspiracy, which, with Dr. Manhattan out of the way, has the world heading for nuclear war.

There is a parallel story, told as a comic being read by a kid at a news stand. The story involves a man trying to save his village from dead pirates but turning evil himself and joining the pirates. The analogies to the dying alternate world in the main story are obvious, but I found this parallel story tedious and distracting; it’s affect on the end (no spoilers here) are in its terrible and grotesque imagery and how that affects people.

My favorite panels are many, this is a beautifully drawn story; the panels on page 27 of book/chapter four, of Jon, who was a watchmaker’s son, building his own type of clock out of the sands of Mars are particularly impressive, as are most of the scenes of the streets of New York, implying the denigration of society around which the entire story revolves.

Watchmen was originally released as twelve separate comics in 1986 and 1987. These twelve were combined into one collection. Fictional text backgrounds are included with each comic book/chapter (except the last) which give additional background on the characters and this alternate history. The movie, assuming the lawyers get out of the way, hits in March.

Get the Book at Amazon