Thoughts on The Avengers 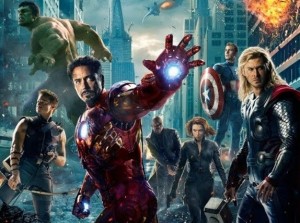 I have not been to a midnight movie in ages. But my lovely wife agreed to act like kids and see the new Avengers movie at midnight last night. It was well worth the lost sleep.

Midnight openings have a feeling of enthusiasm, especially for long awaited movies like this one. As each new character made their appearance, the crowd cheered; as each battle was won, we applauded again.

It was that kind of movie.

The story is well know, and the plot is predictable (for a more detailed summary, see Derek’s notes at SFSignal). Loki, Thor’s miscreant brother, is freed from his prison in space when Earth scientists fool around with the Tesseract (an alien energy source). Loki calls in an army of out-of-this-world baddies, and Nick Fury, leader of SHIELD, played by Samuel L. Jackson, assembles the Avengers.

Some small spoilers after the break:

The back stories of Thor (played again by Chris Hemsworth), Captain America (Chris Evans), Iron Man (Robert Downey Jr.) and the Hulk (this time played, very well IMHO by Mark Ruffalo) were told in other movies. Black Widow (red headed Scarlett Johansson) and Hawkeye (Jeremy Renner) are thrown into the mix, and the team is born, wise cracking their way to an obvious large battle with Loki and his army.

The interaction of the characters is excellent (wise-cracking, as with any Joss Whedon work), each character has their moments and the big battle scene delivers as they work separately, in pairs and as a group to fight the villains (the end of the Thor / Hulk pairing made me laugh so hard my wife had to shush me).

Besides the inevitably predictable plot, two points bothered me:

All in all, a great movie, one that we are looking forward to seeing again on the big screen when our son is home from college exams.

John Carter vs. The Avengers SMACKDOWN