SFSignal.com has posted an interview I did with Jonathan Maberry, martial 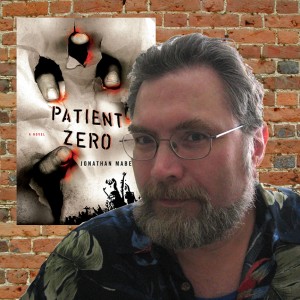 artist and author of Patient Zero, a techno-thriller. Patient Zero is a fast paced read, featuring Joe Ledger, a no-nonsense, no-hesitation fighter who is recruited for the Department of Military Science (DMS) to fight a new threat: a bio-terrorism agent that affects its victims in a way that makes them resemble zombies.

But this is not a Zombie book: there is science and reasoning behind the action. The interview covers the research Mr. Maberry did, his martial arts background, the current threat of terrorism, and more.

There is also realism in the fighting, based on Mr. Maberry’s martial arts expertise. Here is an excerpt that describes his background:

LARRY: Did you pattern Ledger after a particular experience, or type of martial artist that you have observed (or been)?

MABERRY: Joe’s reactions are based partly on my own views and teachings in martial arts, and on the kinds of reactions and reflexes I’ve seen in men I’ve met who work in SWAT and Special Ops. Immediate reaction without hesitation is a prized skill, and very often it’s the dividing line between those who can hack it in Special Ops and those who can’t. It doesn’t make someone more or less of a good person, but it does qualify them for a certain kind of work.

I’ve been practicing and teaching martial arts for 45 years and currently hold an 8th degree black belt in jujutsu and a 5th degree in kenjutsu (the art of Japanese swordplay). Both arts grew out of the fighting sciences of the Samurai, and immediately reaction and appropriate response are core skills. It’s what the samurai trained for and what I learned.

I was able to get a lot of practical experience with this while working as a bodyguard in the entertainment industry. I’ve taught martial arts and self-defense to a number of special needs groups, such as abused women, school kids, college women, the physically challenged, the elderly, and so on.. Until recently I was also CEO and chief instructor for COPSafe, a firm that provided arrest and control workshops for all levels of law enforcement including SWAT.

What Joe Ledger does is not superhuman. It’s the end result of good training coupled with the sharpness of mind that someone in Special Ops would necessarily have.

The full interview is here.