Tad Williams is Ruining my Calm

Life is too short for re-reads.

Do the math. If your good reading-and-comprehension (yes, some of you hear Cheech and Chong’s voices in your heads) years range from age 10 to 80, and you read 50 books a year, you get 3,500 books to read in your lifetime. If you are more prolific, like my wife who sometimes hits 100 a year, you’ll get 7,000.

There are a couple of million books published each year worldwide, and a couple of hundred thousand now in the U.S. (according to this article).

Like most people, I read a lot of books for work.

So, one is REALLY only going to read a very small fraction of the great and enjoyable fiction writing that exists in the world.

What a depressing thought. Yet another great motivator for extending one’s life! Ray Kurzweil, where are you when we need you?

When I hear of people re-reading books, or when I see my son do it, I shudder, visualizing the imaginary hourglass of book reading time trickling above their head. Well, okay, not really, but you know what I mean. Re-reading books multiple times? Really? Perish the thought.

So it is with GREAT damage to my zen and foundation of thought that I embark on a re-read of Tad Williams’ classic series Memory, Sorrow and Thorn. For those that haven’t read or heard of this series, read Daniel Kaszor’s article in the National Post, that talks about this series as an inspiration to George R. R. Martin’s Song of Ice and FireÂ series (known as Game of Thrones to HBOers) and as starting the wave of American fantasy. (Also, if interested, there is an article about a Tad Williams’ hosted book signing of MartinÂ where Martin discussed this series as inspiration).

So, against my better judgement, I’m embarking on a re-read. 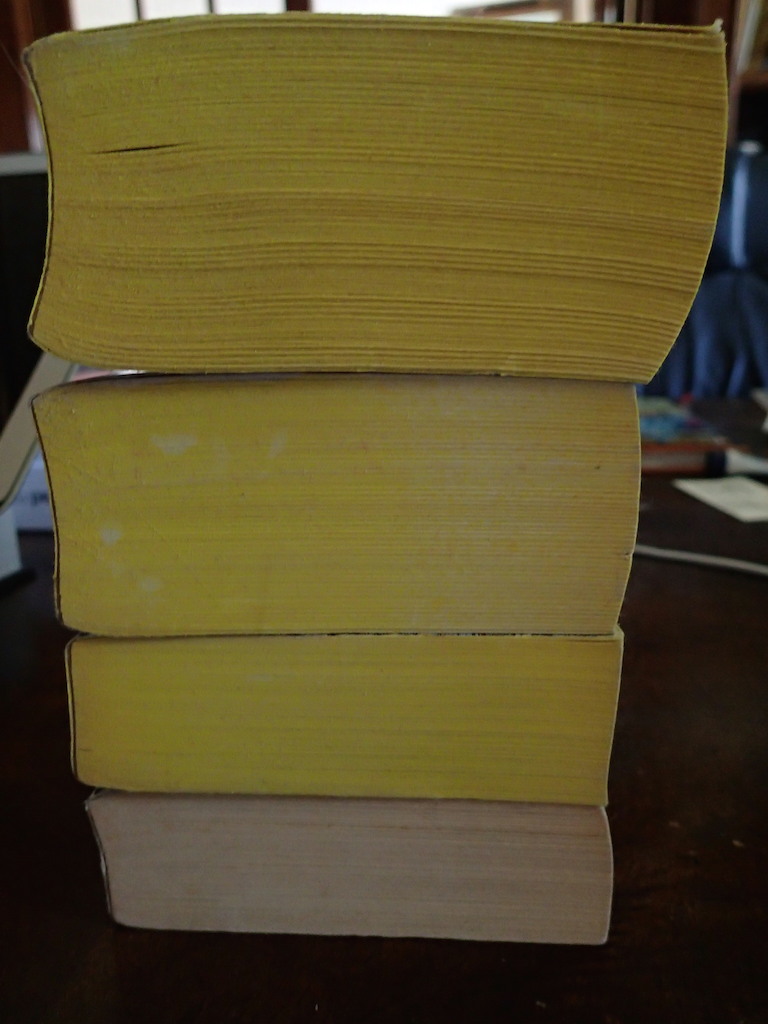 This is a big commitment. Look how thick this paperback door-stoppers are!

That’s just over 3,000 pages worth of commitment. I may finish before I turn 60 in eight years.

I’d like to time it so that I finish right when the first book in The Last King of Osten Ard is released. But who knows when that might be. As a backup against my poor memory, I’ll take notes and share them with any poor souls who are in the same predicament.

Looking forward to saying hello again to Simon (at least I remember his name!).


These re-read posts and other essays have been collected into an eBook with additional essays, available by clicking on the image below.

book notes: The Heart of What Was Lost by Tad Williams