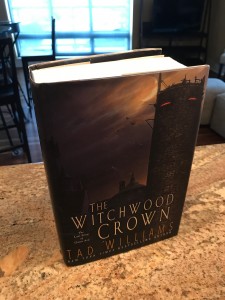 My personal wait for Tad Williams’ new Osten Ard novel, The Witchwood Crown, is finally over, thanks to my friend John D. who provided me the copy sent to him. I’m interrupting my goal (as I suspected I would) of reading the Malazan Book of the Fallen series straight through to read this. It’s a good stopping point, as I just finished the fifth of Steve Erikson’s books in the series (and it is a very good series, highly recommended).

The Last King of Osten Ard series (of which this is the first book) takes place thirty years after the original Memory, Sorrow and Thorn series. As readers we all carry our preconceived notions of what the characters were and what they would become. So there’s always the question of what happened to the characters in that series…who died, who lived, who changed.

I’m only about 50 pages in, but already have a couple of observations:

I have become Time’s poppet, he thought sadly. She plays with me as a child with a doll, pulling off a piece here, another there, dragging me through the mud, then carrying me back to sit at some mock-banquet.

So far I’m able to throttle the desire to speed through it, and enjoy it like a fine tequila…Only 900 or so more pages to go!