I was born in 1961 and became a Packer’s fan shortly there after (reasons why at this link).

I split my time with the Packers into four “eras”:

I do not believe any Packer questions Favre’s just announced induction into the Packer Hall of Fame, (which is a separate organization from the Green Bay Packers, BTW) or his jersey retirement. His so-called betrayal of the Packers (going to the Vikings), his constant retirement and un-retirement, and his other off-field antics pale to what he and others (Reggie White must be included) brought to Packers fans like me that suffered through the barren wasteland of Packer-dom that was the 70s and 80s. Favre was the leader of a group that had Packers fans expecting to compete for the Super Bowl every year, instead of just being lucky to make the playoffs.

If you need any more proof of Favre’s impact, my mom bought me a Favre Jets jersey…it may still be the only one in existence that hasn’t been burned.

With screenshots from Wikipedia, this is easy to explain:

The year before Vince Lombardi became Coach (1958), the Packers had a record of 1-10-1. During his reign as coach, with Bart Starr, Paul Hornung and many others that grace the Hall of Fame, the Packers added five more titles (three NFL championships and the first two Super Bowls) and almost won the NFL Championship in 1960. With three MVPs and two Super Bowl MVPs, there was a lot to cheer about…unless you were ages 0-6 years old, like I was at the time.

The Barren Wasteland of Packer fandom 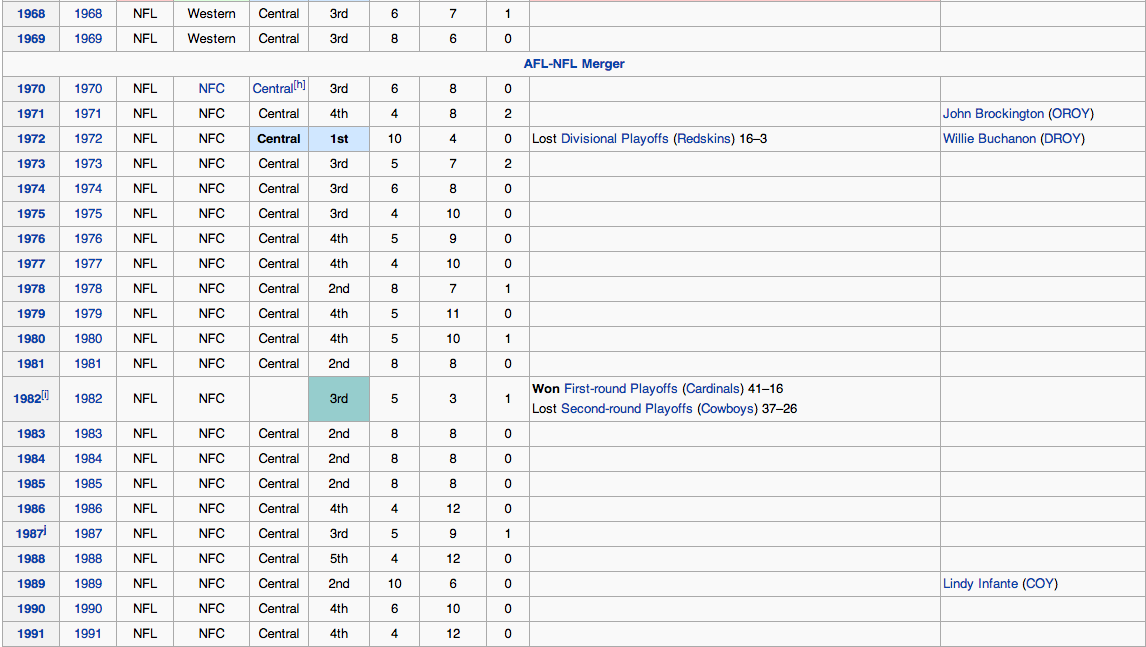 Right about the time I was able to truly root for a team (I was told I was one of the only ones in Texas subscribing to the Packer Backer newspaper., the Packers took loyal fans into more than two decades of futility: one division title, one playoff victory out of three playoff games…over more than twenty years. I didn’t start drinking (okay, I did like beer), but I started playing Rugby (okay, not really in response to that). It was a difficult time to be a Packers fan, even with 11 World Championships, a unique ownership structure and one of the coolest stadiums in the world. It may not be politically correct in this day and age, but backing a loser sucks. 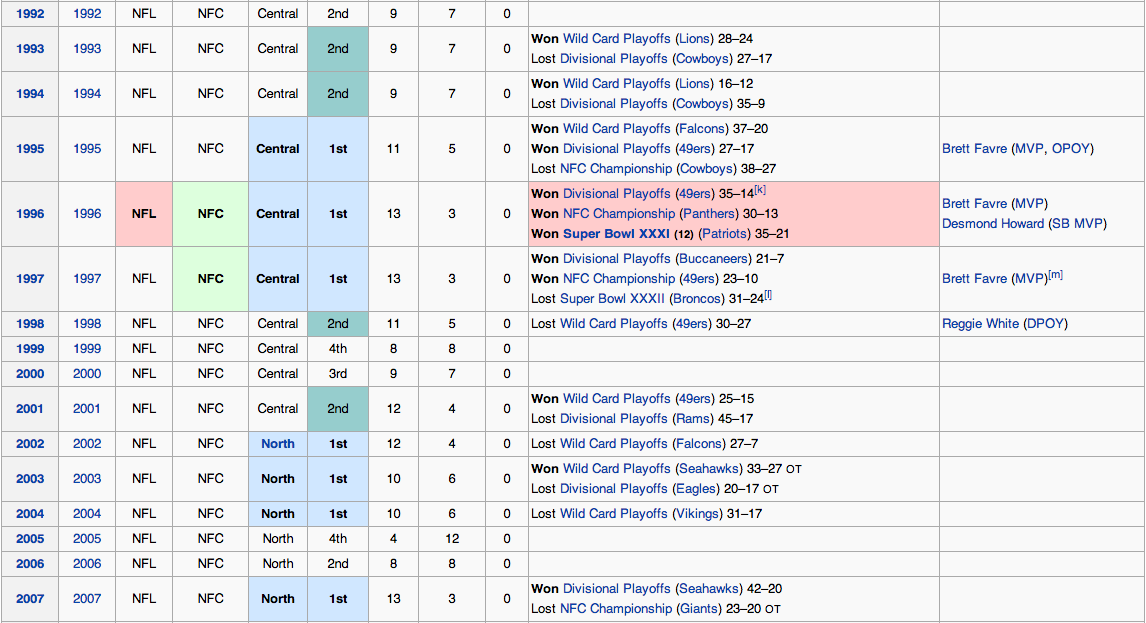 Truly, it wasn’t just Favre (whom GM Ron Wolf traded a 1st round pick for before the 1992 season). Reggie White (1993-1998) and several others had a lot to do with it. During Favre’s tenure with the Pack, we went from one division title in 23 years to 7 in 16 years; from an environment where it was a big deal to even make the playoffs to where it was expected; from one playoff victory to twelve playoff victories, including one Super Bowl victory and one Super Bowl that got away.

No matter if Packers fans feel betrayed by some of Favre’s late-in-career moves, his impact on the Packers history, changing from “hey look, we got into the playoffs” to “we expect to contend for the Super Bowl every year” cannot be denied.

That mentality has carried over. Packers fans (myself included) still expect to contend for the Super Bowl every year. We are very fortunate to be able to go from one future Hall of Fame quarterback to another in Aaron Rodgers. In six season, five playoff victories, one Super Bowl victory. Rodgers currently has the highest career passer rating and percentage completion of any NFL Quarterback in history.

What did Rodgers learn from being Favre’s back-up for three seasons? Did he learn what to do, and/or what not to do? Only Rodgers knows, and I doubt he will ever tell. He is much less a gunslinger than Favre, and has only started six seasons with the packers to Favre’s sixteen. The accomplishments of the past six seasons are not Favre’s, but he certainly set the tone and expectations with Packers fans.

The Packers have won 13 championships and are primed to make a run at several more. Thanks for Favre (and Rodgers) we now expect it every season.

It all started with Bart Starr and Jerry Kramer