The 123rd annual meeting of the Texas State Historical Association (TSHA) was held in Corpus Christi from February 28 – March 2, 2019. I’ve previously attended parts of several annual meetings, but this is the first time I’ve attended the entire conference and my wife’s first time attending as well. The annual meeting featured multiple sessions on a variety of topics, special events, a silent and live auction, and the ever dangerous book room. Once again the staff of TSHA is to be commended not only for the organization and running of the annual meeting but for how upbeat they were at every turn. Many thanks to you all!

I’ve had a few people ask me what goes on at these annual meetings, so I’ve put together these notes to give readers a glimpse and encourage them to attend if they can. It’s an understatement to say Texas is big (!) so the meetings move locations to get them closer to different folks. Next year’s meeting is in Austin, and the year after that will be in Fort Worth. This year’s was at the Omni Hotel in Corpus Christi, and though it was frequently foggy during our three night stay, occasionally the fog did dissipate and provide some nice views of the bridge and the USS Lexington. 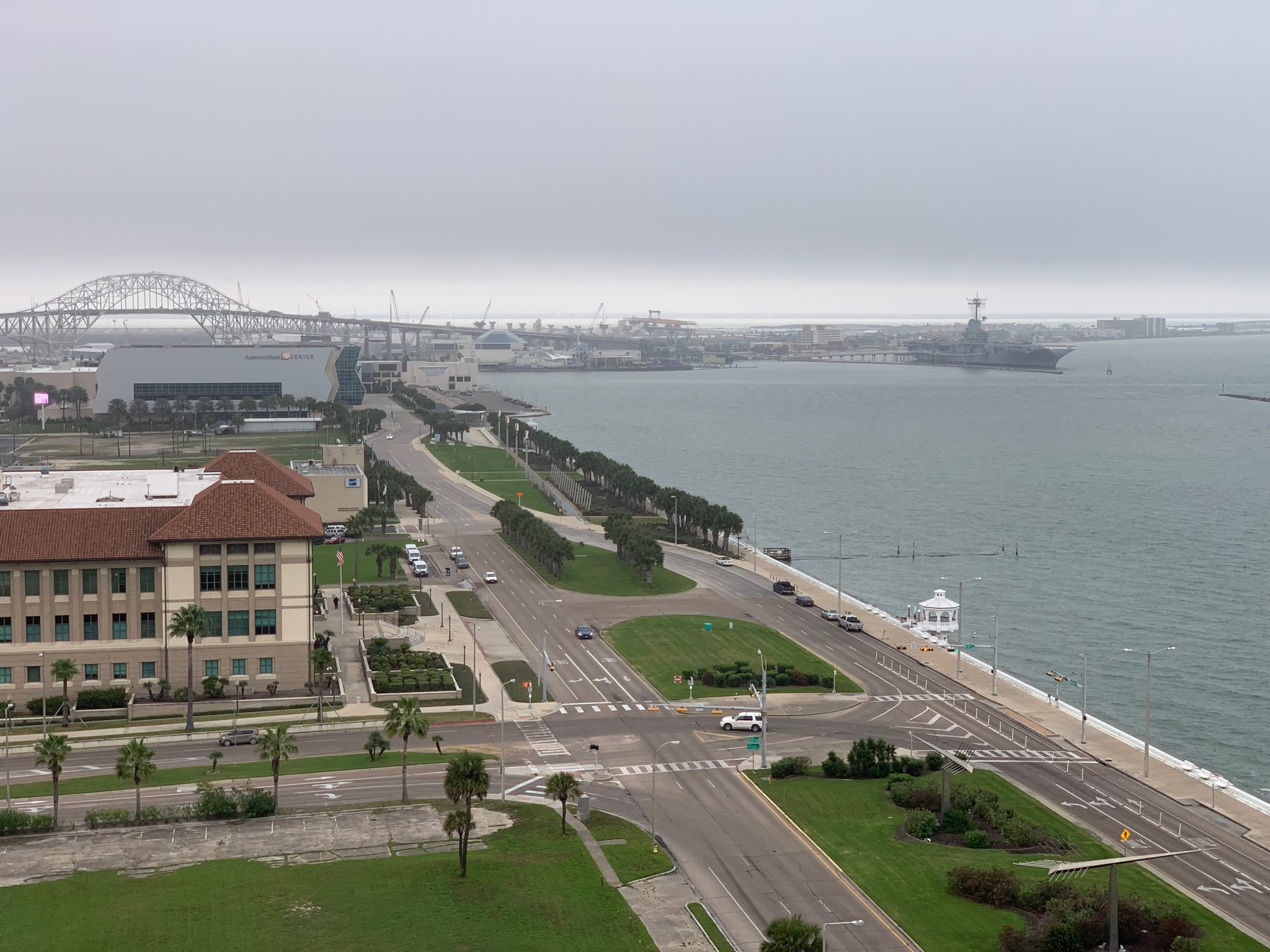 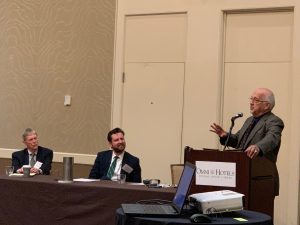 Below are some notes from just a few of the sessions we attended. Where I could find them I’ve linked to the presenter’s web pages where there may be further information on the topic, and to articles on TSHA’s Handbook of Texas where appropriate.

The panel went in chronological order, with Dr. Dawson describing conditions in pre-world war II Texas leading up to the war, and Dr. Montz discussing how the organization of the unions, and their utilization of patriotism as a recruiting mechanism, changed businesses and cultures in the state. Dr. Dawson pointed out the obvious reasons for military expansion in Texas leading up to the war: lots of land for bases, good weather, a huge need for oil and Texas is further away from potential attacks from east coast or west. Thirty airbases opened in Texas between 1939 and 1943.

Dr. Montz discussed the impact of labor organizing on Texas, and on minorities. Working class patriotism part of union recruitment and organizing, with any labor agitators labeled as “red” and anti-American. The President’s recent labor laws enabled the federal government to compel Texas companies to sign labor contracts. One labor organizer of note was Clyde Johnson who built interracial campaigns for union organization. He organized the Oil Workers International Union in Baytown and Texas City. Minorities, though recruited into the unions based on promised of equal pay and fair treatment, didn’t always receive this. Black and Mexican workers could and did sue after the War for work discrimination using the same Federal labor laws that were put together for the war.

Dr. Montz has some interesting slides of photos from the era and how labor utilized the call to arms and patriotism as a recruitment to unions. One of his photos is shown below. 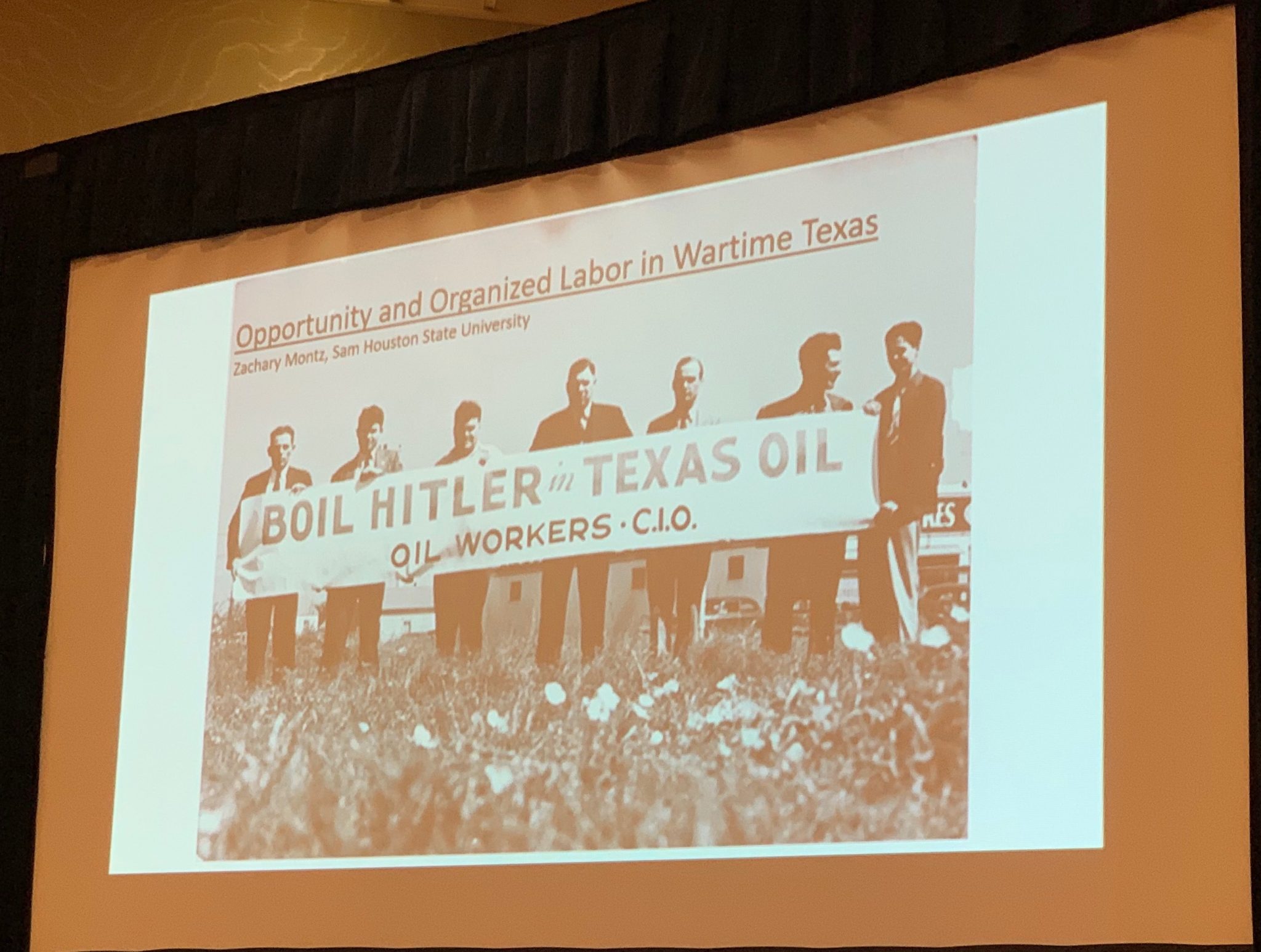 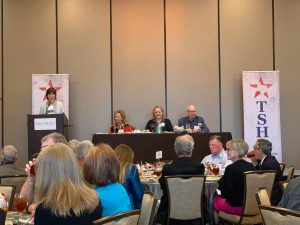 Dr.  Baker (seated in the middle in the photo on the right, between TSHA President Sarita Hixon and Chief Historian Walter Buenger) told the story of Hermine Tobolowsky and her support of the ERA in Texas. One of the main points used by the anti-ERA movement was the fact that women would be drafted (women in combat). Tobolowsky answered this claim in her support of the ERA in Texas by pointing out that based on an earlier Texas law that women were already expected to serve in combat, a law that was proposed to be able to draft nurses but was written unspecifically so that all women could be drafted.

All attendees received a copy of the book “Letters to Alice: Birth of the Kleberg-King Ranch Dynasty” which my wife and I both look forward to reading.

Mr. Moloney went through a history of Corpus Christi in postcards, starting with his first card from 1904 and showing several from the 1919 hurricane. Mr. Moloney has a collection of several thousand (if I recall correctly, he stated the number was over 7,000 but he still had some that needed cataloging in his massive spreadsheet!) postcards and showed some amazing before and after pictures of areas affected by the hurricane.

The most dangerous place at the annual meeting is the book room. It has the triple whammy of new books, rare books and the silent auction of used books. We’ve recently downsized (with the vast majority of my books survived the downsizing but in storage) but our love of books makes this a room that draws us in like a black hole.

The TSHA staff had put donated books into groupings, tied them with a bow and put them out on tables for the silent auction. As I was browsing the books, resisting the pull of bidding on every grouping, my wife Audrey comes back from setting up a bidding number for us and proceeds to bid on 2 or 3 bundles. Resistance released, I did the same. The two bundles on the left were my winnings (Audrey unfortunately (or fortunately for our downsized life) was out bid.) 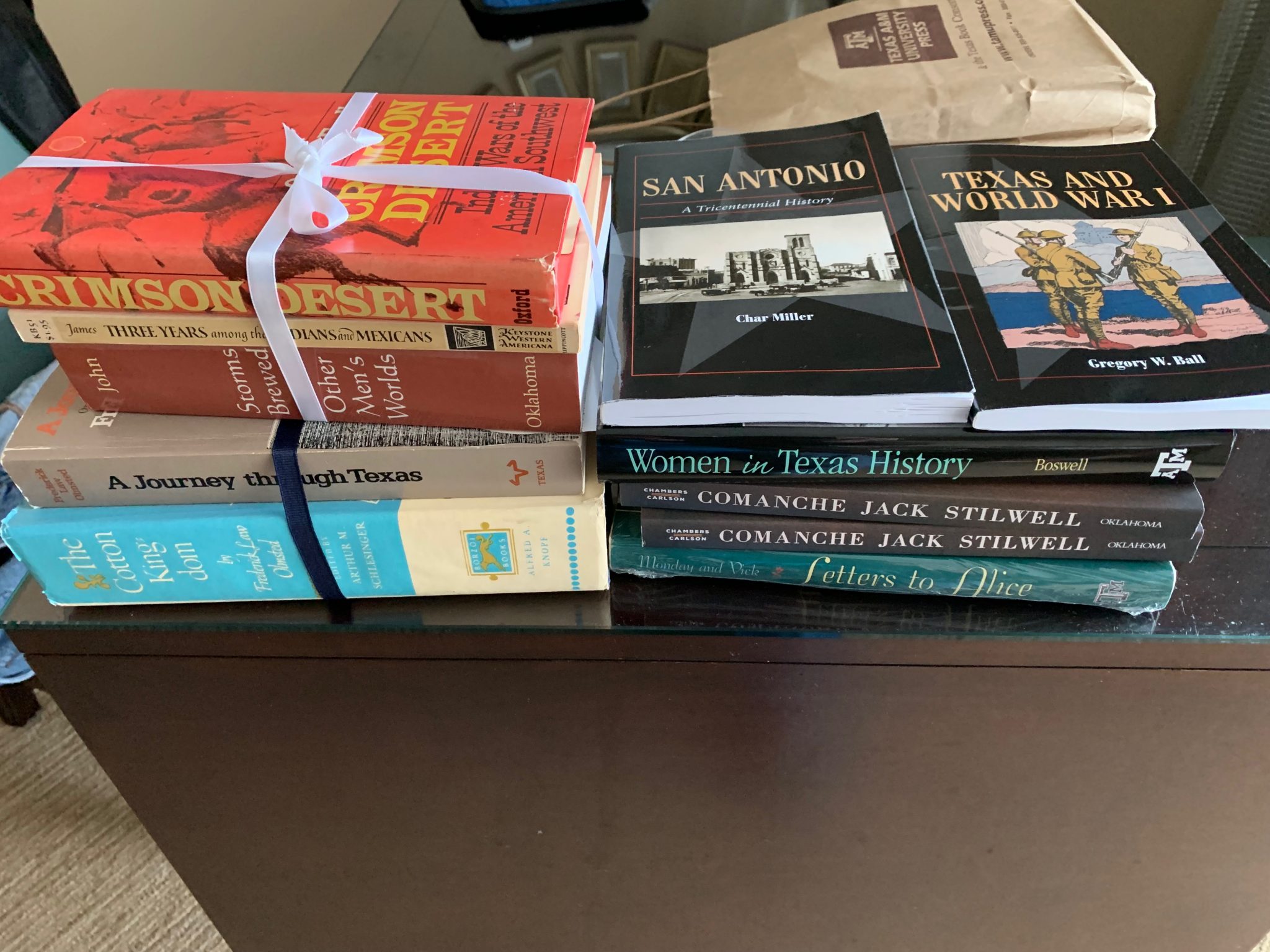 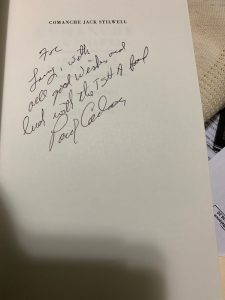 One bundle is a set of three books on southwestern Indians, and the second was a set of two books by Frederick Law Olmsted. Olmsted is not only recognized as the leading landscape architect in American history but working for the New York Times journeyed through the south and Texas in the late 1850s. The two books in this bundle are some of the products of that journey.

The other books in the photo are Audrey’s Women in Texas History book she bought, two of the newest books in the TSHA Cotten series of Texas History (San Antonio: A Tricentennial History by Char Miller and Texas and World War I by Gregory W. Ball)…and two copies of the book Comanche Jack Stilwell. I’d bought one from my friend Kent Calder at the University of Oklahoma Press table in the book room, and it was the last copy. Later in the evening, our friends Steve and Allyson were kind enough to give me a copy signed by one of the authors (I hoard signed books, it’s true)!

Passing the baton – From Current President to New President 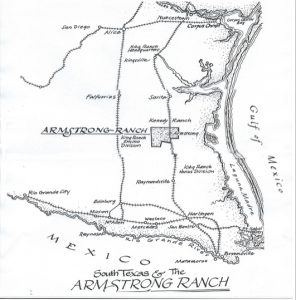 The structure of the TSHA has as officers a rolling set up upcoming and former presidents. The two past presidents and the two upcoming presidents join the current president, the secretary and treasurer on the board which provides excellent continuity. The TSHA rotates the President position between an academic person and a business person.

It is tradition for the out-going president to provide a presentation about a historical topic as they pass the baton and presentations from both classifications of leader are enjoyable.

Sarita Hixon is the outgoing president, and provided an in-depth and entertaining overview of The Armstrong Ranch in south Texas. The ranch has been owned by her family for seven generations, originally purchased by her great-great-grandfather James Durst in December 1852. The ranch is still in the family thanks in large part to Sarita’s great-grandfather, John B. Armstrong, a Texas Ranger famous for arresting John Wesley Hardin. Armstrong fought a twenty-one year legal battle to regain the land from attorneys who settled the estate after James Durst’ (Sarita’s great-great-grandfather) death. The final ruling in favor of the family came in May 1904.

Sarita shared how the ranch survived the Great Depression, and also the accomplishments of her mother and father. Her mother, Anne Legendre Armstrong, was the first woman U. S. Ambassador to the United Kingdom. The photo below (from Sarita’s presentation) show’s her mother Anne and father Tobin Armstrong in England. 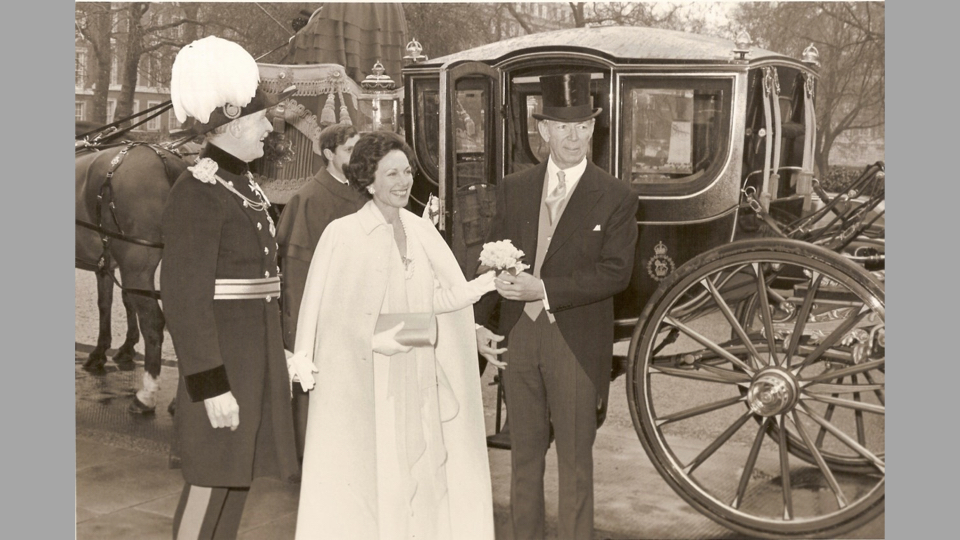 Dr. Emilio Zamora is the in-coming president, and was welcomed at the Thursday night President-Elect’s reception at the Tejano Civil Rights Museum and Resource Center. Dr. Zamora was the moderator of the first session I attended on Thursday. As always, the transition will be seamless as the in-coming president has been part of the executive committee for the past two years, and the out-going president will remain on the executive committee for two more years.

There are many benefits to becoming a member of the TSHA, and many membership levels (from Student to President’s Council and Lifetime Members). In addition to the Annual Meeting, the TSHA provides the Handbook of Texas online (for free), the Texas Almanac, the Southwestern Historical Quarterly and provides support for Texas History Day and other educational programs.

Please consider becoming a member at any level. Thank you!

It was foggy for most of our stay in Corpus Christi, but we did manage to see the evening light show of the bridge one semi-clear evening.

The TSHA board meeting was hosted at the Corpus Christi Museum of Science and History. It is one of those museums that you could get lost in – and some of us did moving from a meeting room to another room.

We did not have time to go aboard the USS Lexington, but took some eerie photos of the “Blue Ghost”, so named because of its blue exterior paint and called “ghost” by the Japanese for its tendency to reappear after sunk. The predecessor to this ship was sunk in the Battle of the Coral Sea, so this one was re-named and sent into the Pacific. 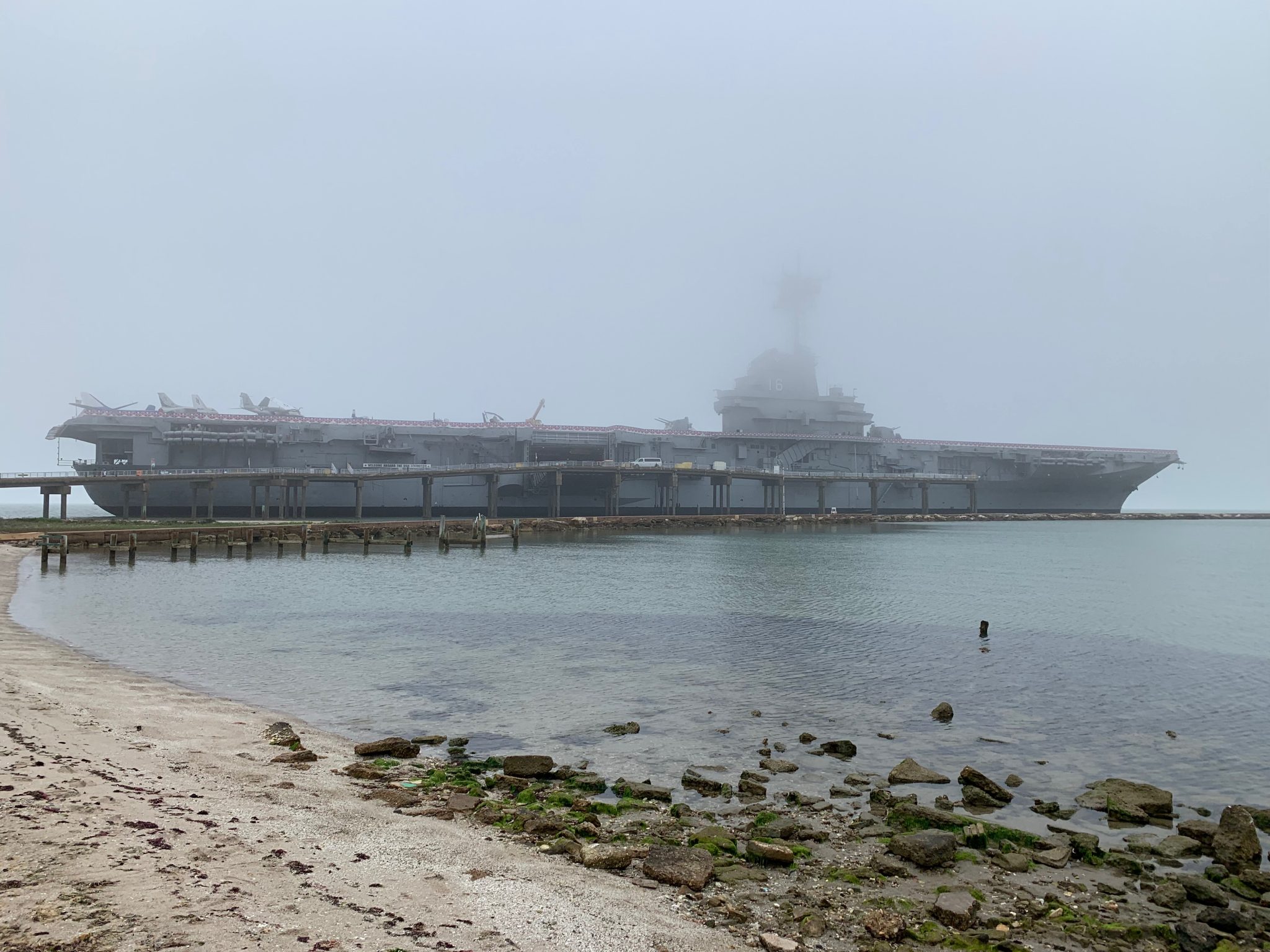 As a Texan, visiting the home of the original Whataburger requires at least on trip if not two (yes, we went for lunch and then breakfast on the way out of town) to the one and only two story “Whataburger By The Bay.” 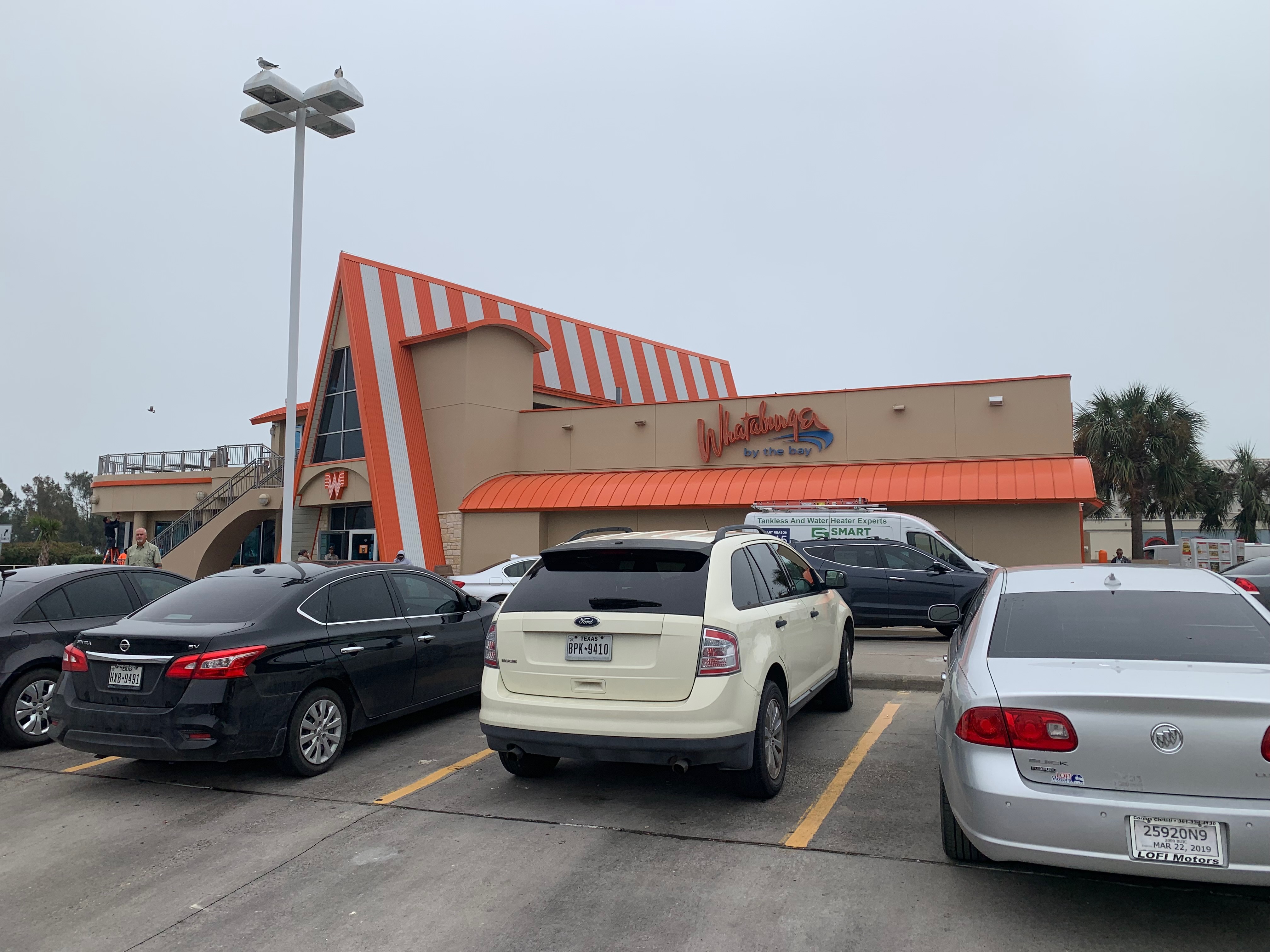 Some mornings it was so foggy I did not cross the bayside road for my morning jog. But the one morning I did I ran a couple of miles out from the hotel along the bay, past several nice parks and statues, including the memorial to Selena. 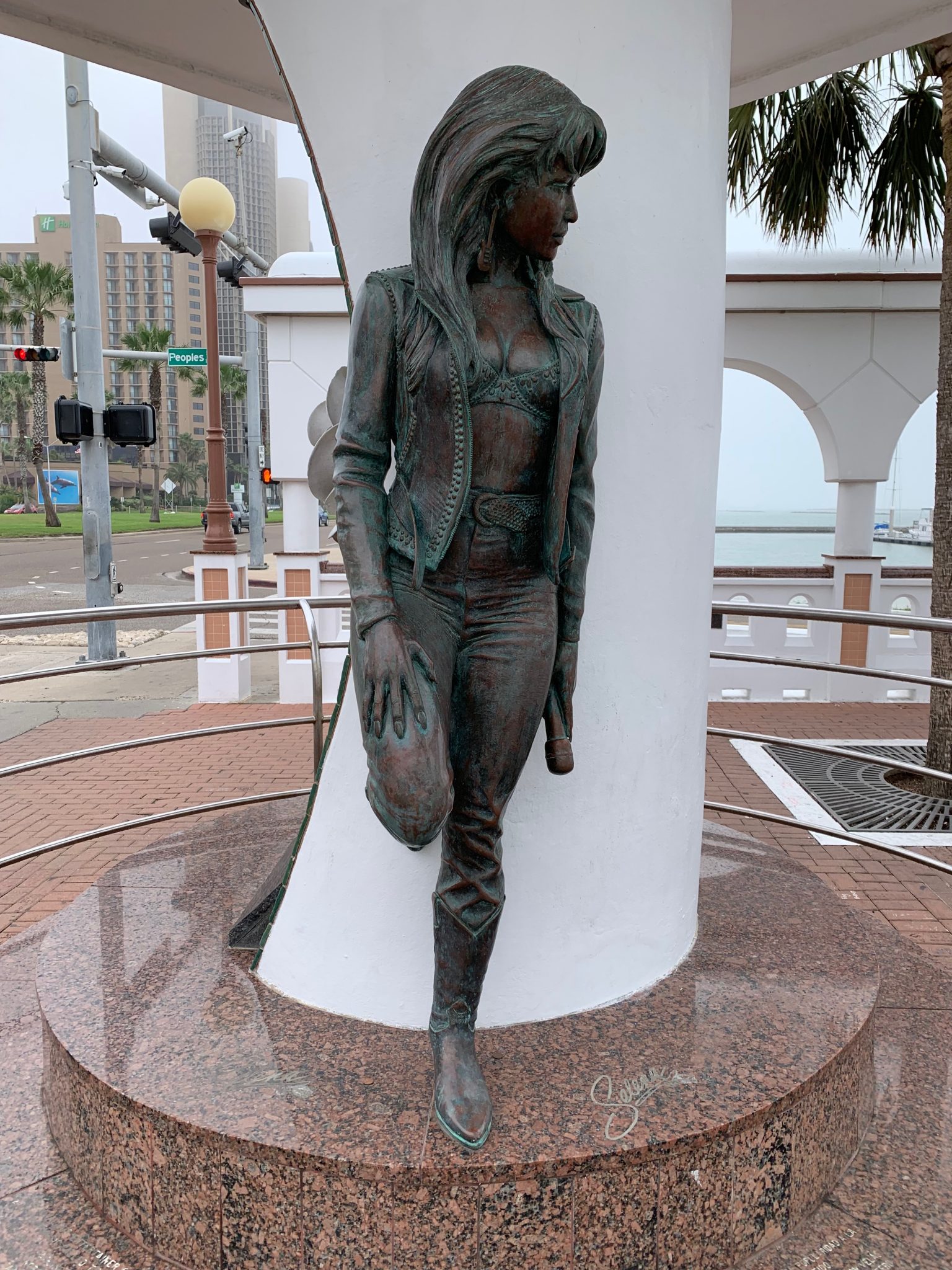 The Battle of San Jacinto by James W. Pohl