With Lamb and Fool, Christopher Moore has now added his 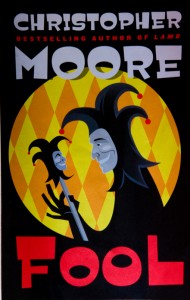 own unique set of background material to two of the English language’s most read stories: The Bible and the Works of William Shakespeare.

Fool retells the story of King Lear (with some Hamlet and other Shakespeare plays thrown in for good measure) from the perspective of Pocket, the court jester. Though foul mouthed and always looking for a quick ‘shag’, Pocket’s history is slowly revealed, and, of course, he is more than just a fool.

In this Moore book, while funny, the story is the thing. It still involves King Lear, going crazy and asking his three daughters how much they love and honor him. The two eldest (Goneril and Regan) lie their butts off, and the youngest (Cordelia, the one Pocket has not only been assigned to but is madly in love with) tells the truth. Her truth does not set well with the good mad King, and he banishes her away with a prince from France…much to Pocket’s dismay and anger.

Pocket then begins to use his unique position (of being able to curse, shag and tell even the King the truth) to manipulate the princesses and other hangers-on into war, mayhem and, in some cases madness, to get what he wants….his Cordelia back. With the help of three witches (a little bleed over from Macbeth), his own fool Drool, the also banished Kent and the slow remembrances and revealings of his own past, Pocket pulls the strings of greed and ambition of Goneril and Regan to try and move the kingdom in several directions at once.

Moore adds in several pieces that put his own perspective on British humor, including footnotes for certain words to explain British English to all (defining tosser as “one who tosses; a wanker” and wanker as “one who wanks; a tosser” in separate chapters), insults upon the French, much foul language (used in sentences with much heinous hilarity) and, of course, shagging.

I purchased this book (and several others) at a Christopher Moore book signing, where he also explained the difference in England between the “dog’s bollocks” (which is a good thing) and the “dog’s breakfast” (which is a bad thing). He also stated to an obvious question, that he wouldn’t be writing a sequel to Lamb, for the obvious reason (the rest of the story has already been told in a pretty famous book).

The book and the author are quite enjoyable. I’ll re-read Fluke in a few and also post a review of it here as well.

bookrev: You Suck: A Love Story by Christopher Moore

The funniest masterpiece I have ever read