While waiting for Riordan’s next Percy Jackson novel The Last Olympian, readers can get their Percy fix with The Demigod Files, a collection of short stories and 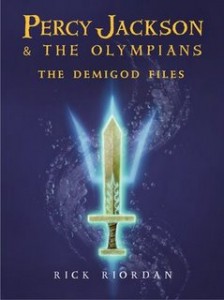 For the kids, there are puzzles at the end, and short interviews with the characters, plus pictures of the gods and half-bloods. An intro chapter from The Last Olympian is included, showing the Percy is going to get into trouble not only with Titans but with girls (Rachael and Annabeth).