The Last Olympian is a well written ending to an excellent series, with the 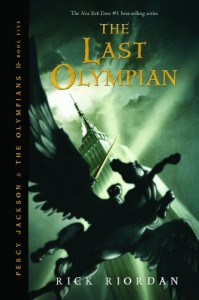 promise of more to come. The prophesized battle between the Olympic Gods and the Titans starts in the first chapter, and proceeds with all haste through all 381 pages. Though marketed as “Young Adult” fare, this series is entertaining and enjoyable to read no matter your age.

The action starts immediately, with Percy and another half-blood (one parent mortal, the other an Olympic God) setting off to blow up the cruise ship commandeered by the Titan Kronos, who has possessed the body of Luke, half-blood son of Hermes. Percy is still trying, as all teenage boys do, to figure out girls, namely Rachael Dare, a mortal who can see things that mortals aren’t supposed to see, and Annabeth, half-blood daughter of Athena. The cruise ship is blown up, but the other half-blood is killed, and Percy is saved by allies of his father Poseidon. Poseidon is fighting the Titan Oceanus (underwater, of course) but tells Percy it is time for him to hear the prophecy.Percy returns to Camp Half-Blood, when Chiron and Annabeth reveal the whole of the Great Prophecy from the Oracle which Percy has only heard pieces of:

A half-blood of the eldest gods
Shall reach sixteen against all odds
And see the world in endless sleep
The hero’s soul, cursed blade shall reap.

Naturally Percy assumes this is referring to himself, as his sixteenth birthday is only a few days away.

The Titan’s have unleashed the Titan named Typhon, from under Mt. St. Helens, and he spreads destruction walking across the U.S. on his way to NYC (in case you have forgotten, Mount Olympus is on the 600th floor of the Empire State Building). Zeus orders the gods out of Olympus to fight Typhon, leaving Hestia, Goddess of the Hearth as the Last Olympian guarding Olympus.

Nico, half-blood son of Hades, convinces Percy to make a desperate gamble (no spoiler here), and Hades reveals that he is going to stay in the Underworld waiting to see who wins the battle. Thus the Olympic Gods are divided with Zeus fighting Typhon, Poseidon fighting Oceanus and Hades sitting it out…and Kronos/Luke and his army advance on Olympus.

The rest of the story won’t be revealed here, but it revolves around Percy and team trying to find a way to fight the onslaught from the Titan Kronos and his assembled army, plus figuring out how the Prophecy plays out. Most of the characters from the previous novels make a return appearance, and, as always, Mr. Riordan manages to layout the secrets and revelations right in line with the story.

The difference between this series and other well known “young adult” series such as Harry Potter and Twilight is the upbeat and enjoyable tone. Even though there is death and destruction in the Percy Jackson series the kids act like kids (except for a few Olympian powers!) and have kid problems and a kid’s upbeat perspective.

This is a series I would highly recommend (and have) to anybody, and I look forward to more stories from this world by Mr. Riordan.