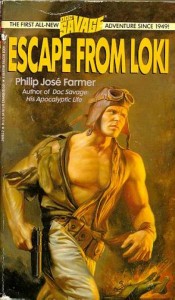 Philip Jose Farmer has long been one of my favorite authors, with his Riverworld and World of Tiers series ranking high on my list of enjoyable speculative fiction series. The Doc Savage series has also been a long time companion.

Escape from Loki is PJF’s take on Doc Savage at 16, a pilot in World War I, shot down behind enemy lines. He meets Monk and Ham (who are also hiding from the Germans) but is eventually captured, and meets the Baron Colonel von Hessel, who somehow knows Savage is being trained by his father into some kind of “superman” (interesting shades of the German “master race” in the next war). Young Savage escapes, steals a plane and is shot down. While being transported on a train to a secure prison he encounters Renny and Long Tom, who escape by knocking a hole in the side of the train. Doc escapes himself, but is again recaptured. A three-time escapee, he is sentenced to Loki, an “escape-proof” prison, which Doc and his united five companions, of course, escape from.

Farmer’s Doc has many differences from Lester Dent/Kenneth Robeson’s Doc:

The story does give background on Doc’s team of five, his budding sense that he must fight evil, what evil is, and some background on his father and his motivation. Though the style is radically different that the Lester Dent (et al) authored series, it does fill in a great back story of how the team came together.