An Evening with Carrie Fisher 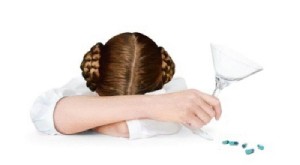 My notes on our “evening with Carrie Fisher”, viewing her one woman autobiographical show at the Hobby Center last week, were originally posted on the now-archived Hugo-nominated SFSignal. The entire article is below.

“Dad,” asked my 21-year-old son, “do you think she’ll wear the Princess Leia outfit?”That, in a nutshell, is the now 55-year-old Carrie Fisher’s blessing and curse. My friend Vern admitted he had “serious issues with Princess Leia” from age 13. Ms. Fisher herself tells the story of a man who said he thought of her daily from age 14 to 22…”at least four times a day.”

Our evening with Carrie Fisher, watching her perform Wishful Drinking, her one woman autobiographical sketch of “talking about myself behind my back” was neither as magical as the first time one sees Star Wars as a teenager and probably will not be as memorable (my wife enjoyed it, but even she rated the jazz concert from the previous Friday better entertainment…it was Joe Sample!). Ms. Fisher’s show, which has been running off and on since November 2006, could quickly have turned into celebrity self-indulgent crap (at one point she says “Don’t you hate it when celebrities talk about themselves?”); but through many clever turns of a phrase and an uncanny detachment of talking about tragic parts of her life in humorous fashion, Ms. Fisher made it quite an enjoyable evening. It was comfortable and fun, like exchanging stories while drinking with an old friend.

In this case, the old friend has a Hollywood pedigree, a metal bikini from George Lucas, one ex-husband named Paul Simon and awards for mental illness. And that’s how Carrie Fisher structures her very well written show, in four parts:

Starting off with how her friend Greg, “a gay Republican lobbyist” died in her bed, Fisher winds her way through her family tree with a blackboard that looked like a Sudoku puzzle with celebrity pictures. She describes the Debbie Reynolds-Eddie Fisher-Elizabeth Taylor triangle of her parent’s marital demise as the “Jennifer Aniston – Brad Pitt – Angelina Jolie of the day.” Though she appears to come from celebrity royalty, her family history is enough to make a grown woman drink, or do drugs, or go crazy…which she does.

But first she gets dragged into show business, goes to Speech and Drama School in London and lands the role of Princess Leia in Star Wars. She does a great bit  (with movie clips) about her on-again, off again British accent that shows up in the film. And she mentions my son’s comment, which is everyone’s comment…that she didn’t realize that she signed up to wear the bikini from age 23 until the day she dies. But whether she enjoys the Star Wars adulation/worship or not, she does have fun with it…she shows a Princess Leia Pez Dispenser, tells how George Lucas says there was no underwear in space, so her costume didn’t require it…and shows an R (or maybe X…I couldn’t get close enough to actually rate it) rated statue that she saw of her in the bikini at one of those “conventions”. She even claims that since Lucas has trademarked her likeness, she owes him a couple of bucks every time she looks in the mirror.

And yes, she does come out for a bit with her hair in the Leia style. drafting a man from the first few rows of the audience to also model a wig in the same style. Guys, let’s not kid ourselves: 55 years old or not, we all wish we were that guy, getting hugs from Carrie.

After a brief intermission, Ms. Fisher comes back out to discuss and describe her two ex-husbands: a “short Jewish singer, like my father” (Paul Simon) and a man who she claimed credit for turning bald and gay with her new codeine-fed superpower (Bryan Lourd, though it is uncertain if they were ever legally married). She recites some of the lyrics from songs Simon wrote about her, mainly because when spoken by her, the sound quite unflattering (“if you can ever get Paul Simon to write a song about you, do it, the man is a genius”).

For her final act, Carrie claims that though she never won awards for acting or writing (in fact, her novel Postcards from the Edge won the Los Angeles Pen Award for Best First Novel) she has won lots of awards for being mentally ill. A graphic is displayed from a psychology textbook with her picture in Princess Leia regalia as the lead photo in the Manic-Depressant article, as Fisher quips “a Pez dispenser AND an article in a psychology text…what an accomplishment!” The only serious (or semi-serious) part of the evening comes when she describes how she deals with her illness (“If you claim something, it has less power over you.”).

She ends by citing the holographic speech that is projected from R2D2 in the first Star Wars movie, the first time most of us ever saw her, saying that these lines are stuck in her head and trying to get out. As a writer, she had many good lines that she managed to get out on stage, to try to communicate her points. And, as someone forever immortalized, an icon in the minds of many, her most descriptive line is “Celebrity is obscurity, biding its time.”