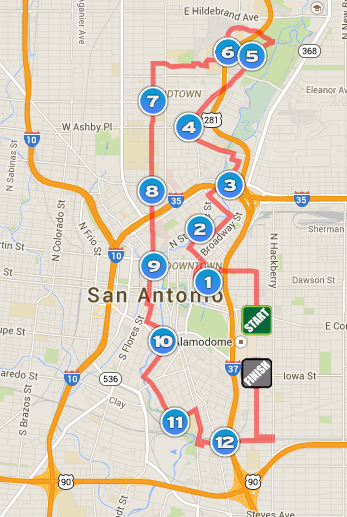 Race day at the San Antonio Half Marathon. After 18 weeks following the Hanson’s Half Marathon training program (and two months of running before that to determine if my knees could handle running six days out of seven), it was time to put the wheels to the test. I’d targeted this race for several reasons: it was familiar territory, as I went to high school and college in San Antonio; and this course kicked my butt in the heat three years ago…granted, it beat down several runners in that heat wave. But it was good motivation.

After running this race twice (my first half marathon ever with Bert in 2009 San Antonio Half Marathon and with my brother in the heat in 2011), we knew not to try the “commute” route, as neither the congestion of being dropped off nor the park-n-ride from the AT&T Center options were enjoyable, relaxing or in any way conducive to a good pre-race routine. So I traded one of my free night coupons for a night at the Mansion del Rio hotel on the river, within easy walking distance of the starting corrals.

My gorgeous wife and I had a not-so-quick (everyone had the same idea) pasta dinner at Paesano’s across the river, and in bed by ten led to a decent night’s sleep.

Whether it was because of the fact that I signed up for this race very early on (since I was planning an 18 week running program around some race) or because my target time was sub 1:50, I was assigned to corral 2. We walked down Commerce street from the hotel, a nice warm-up walk in the 50 degree weather. Rain had been in the forecast, but a front that came through not only made the temps perfect, but cleared out any chance of rain. We started out under a few clouds. There was a train at the St. Paul’s Square outside the Alamodome that was decorated for the season…and yes, in spite of the pre-race anxiety, I did stop for the photo op. 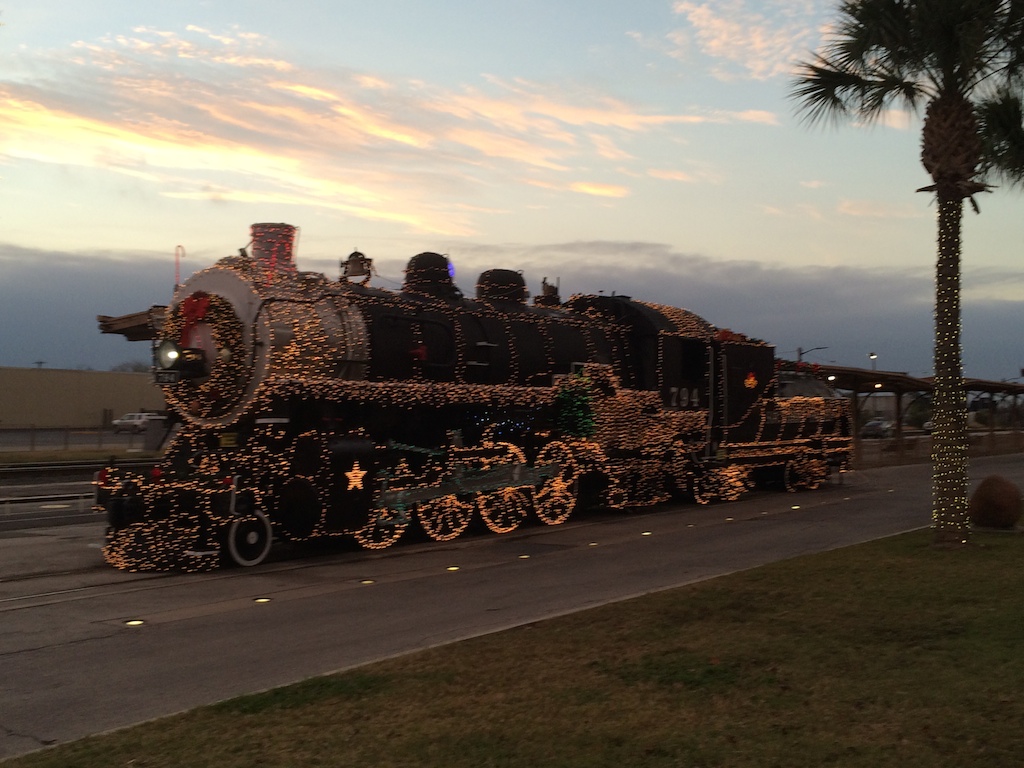 Now we all know that the corrals are more like “guidelines”, and all that really matters is the time when the chip on your shoe crosses the starting mats. But the setup for this running of the San Antonio Half Marathon was “skinny” to say the least…when we came up from Commerce Street, we hit corral 8 or 9, so we had to wade north through tons or runners and watchers. This took a while, longer than it should have – there was limited walking space on the side of the corrals, and a lot of that was taken over by poorly placed trash cans.

We were close to my spot when the starting gun went off. No matter….but my wife (who did her always outstanding work as gear pack sherpa and cheerleader) didn’t know the “guidelines” rule, and got anxious. I freaked her out by taking a side detour into a porta potty (light on the feet!), popped back out…and we were off.

Some gent at the start, not a runner, was running beside me holding a large video camera and “interviewing” me….I have no idea who he was…could have just been a guy who like to jog holding a large camera.

In an earlier post, I discussed (and over thought) my race strategy. In the end, I listened to my big brother (there’s a first time for everything), and “trusted my training.” During the tempo runs, I’d trained to maintain a cadence of 180 steps per minute. Before changing my stride to accommodate a bit of knee arthritis, I ran with long strides, with much fewer steps per minute. I’d used a metronome program for my iPhone to help me keep pace during the tempo runs. Though I thought it might drive me slightly more bonkers, I had the metronome pinging in the background through the entire race…and, in the last few miles, it certainly was a big reminder to keep on pace. 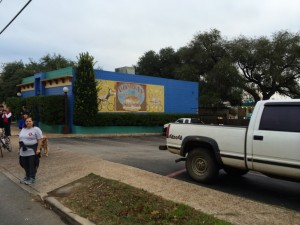 Except for the one hill (did I mention the hill? Trust me, I will), the course ran through many familiar places and old haunts. Of course, after heading north from the congested confines around the under-utilized Alamodome, we headed east towards downtown and ran it by the Alamo (see the sure-to-be Oscar worth Alamo running video below). The course zig zagged roughly north out of town, past new condo and townhouse developments, and went through the site of the old Pearl Brewery, now home to shops and cool book stores. It then turned up N. St. Marys, home to many of the bars and pubs that, as a college student at Trinity University, I heavily invested my hard earned dollars. After crossing under 281, I laughed out loud, much the the confusion of the runners next to me: we were passing by Bombay Bicycle Club, the bar where after final exams my friends and I held our near infamous “bar exams”…and now I was running by it. 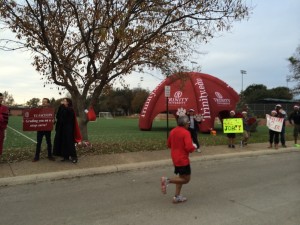 Then we got to the one hill on the course. To a flatlander like myself, who training in Southeast Texas has to run the gullies to get any hill training, this was a large elevation change (in reality, it was a little over 100 feet). I’d driven this hill almost everyday commuting to Trinity for several years, and my old car could barely get up it. But the Trinity faithful lined the course, many of them wearing oversized Trinity Tiger paws which made for a nice fuzzy high five…about a hundred high fives…thanks for the support and motivation.

After winding through the Trinity neighborhoods, there was a nice straight shot down Main Street back toward downtown – about a three mile shot that at mile 10 dumped us out somewhere in the King William district, amongst all the old buildings. I’d set myself up on the runner tracking so I could see the official times (my lovely wife was texting them to me as well). At mile 10, I needed to be under 84 minutes to hit my goal; I was at 82:28, so I had a minute and a half to spare….not a lot of slack. 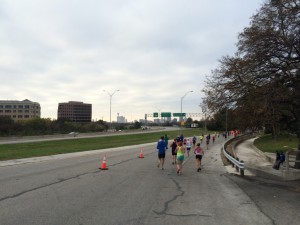 My brother had suggested I check myself at 10 miles to see if I could push the last 5K. It was a great idea, but I contented myself with keeping to the 180 beats per minute pace…and I’m glad I did, as maintaining that pace (which was around 8:13) the entire way was a lot by the time we got to the Finish.

The Finish area was straight, for a change. The last layout of this run had you turning a corner and seeing the Finish right in front of you. With this layout, there was about 3/4 of a mile straightaway to the Finish banner. I pushed with what little I had left to be certain I was under the 1:50 banner, and was done.

Below is the oscar-worthy Alamo-while-running video.

My Results at the 2014 San Antonio Half Marathon

I did indeed meet my race goal, as per the stats below. The fact that there were 48 other old farts in my division that were faster is a source of amazement and motivation. My wife looked at the clock time, and was ecstatic that I’d beaten my goal…then we got the text with the chip time, and the party was on.

Austin Distance Challenge 2021-2022: A Hopefully Logical Approach to the Insanity of Running Six Races in Six Months as I turn Sixty