The race is over, the soreness is gone (well, almost), and my first ever 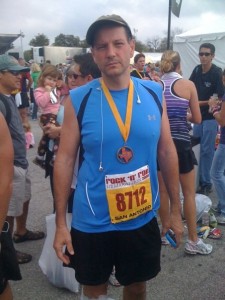 half-marathon (at the San Antonio Rock and Roll Marathon) is in the past. Bert and I crossed the finish line at 1:56:57, an 8:56 per mile pace, beating our 2 hour goal and finishing about 2,000 out of 20,000 half-marathon runners. Congrats to my friends Everett and Michael who also completed the run, and all of the other participants. As someone who has in the past played sports like basketball and rugby (i.e., sprint, stop, sprint, stop…or, as one of my so-called friends called it, sprint, stop and watch others, sprint, stop and watch others) running 13 miles was a daunting event.

So what did we learn from this latest undertaking, this latest accomplishment struck so resoundingly from the bucket list:
– San Antonio cops never change; the starting line was in Breckinridge park and the exit at Hildebrand was backed up two miles. I suggested to John, who was dropping Bert and I off, to pass the line and pull over on the freeway, and we would walk down Hildebrand. But one of SA’s finest motorcycle cops pulled John over, telling him he was going to write him a “big ole ticket”. He motioned Bert and I back, telling us to get in the car or we would all get tickets. “Go down to St. Mary’s exit, there’s no one there, you’ve done this before.” We hadn’t done this before, but he was right…there was no one at that exit, and we two plus several hundred others walked part the ever-tempting Bombay Bicycle Club bar to the 40 some odd starting corrals on Broadway.

– running in front of the Alamo wasn’t as exciting as I thought it would be; hey, I grew up in SA. But c’mon, mariachi music in front of the Alamo is quite cliche’. But I did get an excellent photo…prompting my nephew the runner to quip “did you actually take your Blackberry on the race?” (why, yes. Yes I did).

– music and female support makes one run faster than one’s desired pace; my wife and Bert’s girlfriend (plus my mom) were cheering us on as we passed mile 2.5, and again (with Bert’s dad and my step-dad) at mile 12.5. Support quickens your pace, in a good way. Unfortunately, so does music. At mile 4 or so, Bert and I both put in the earphones. A few minutes later, Bert is waving at me to slow down; we’d picked it up to an unsustainable seven minute pace, while listening to some good old fashion rock and roll (it was the rock and roll marathon, after all). We would have been wiped out later if we would have kept this up, good catch on Bert’s part.

– singing Bon Jovi at the halfway point is a requirement; I threatened Bert before hand that I was going to sing on the course, but he beat me to it. When his trusty GPS watch told him we were halfway, we started, and I joined in: “Whoa, we’re halfway there, whoa-oh, livin’ on a prayer. Take my hand, we’ll make it I swear”. We didn’t hold hands on that part.
-Rock and Roll mixed with running causes hallucinations; there are plenty of stories about getting into the zone, either running great or running on fumes. Shortly after passing downtown, a bit of AC/DC came on my iPod. After a few minutes, I thought I heard an echo in my head. Taking of the earbuds, I heard the band ahead of us playing the exact same song…or at least I thought that is what I heard.

– Gu is Good; around mile 10, it was getting tough. There had been water and cytomax stations every 1.5 miles or so. The first station I tried the cytomax, and said aloud “that sh#t is nasty”, much to the amusement of my fellow runners. But at subsequent stations, I grabbed anything there were giving me. At the mile 10-ish station, they provided Gu. I grabbed a packet of Blueberry Pomegranate Gu. For those of you that haven’t had it, it is a paste like substance that has lots of carbs and potassium specifically to get you through an endurance exercise. I was suprised that it tasted so good, and it did actually mak me feel better. Could have been because I love blueberries, and was probably hallucinating at that point.

– old Army movies come in handy with only a few miles left;

Me, at mile 11.5, after rounding the corner with the sun and the humidity both hitting at the same time: “Bert, I can take it any more. You go on ahead.”

Bert: “Aw, quite your whining. There’s only two more miles.”

– we beat that Kenyan; At the end, they split the finish line so the marathon runners went to the right, we halfies went to the? left. As we headed to the finish line, a hill appeared. We had to go under an overpass by the Alamodome, then up a hill to the other side. What genius thought up that configuration? As we ran up the hill (no, we didn’t walk) the crowd got louder. The ovation peaked as we crossed the finish line. Then Bert and I looked over at the marathon finish line just as the first finisher, Gilbert Koech of Kenya, crossed the marathon finish line. I looked at Bert and said “We crossed before that Kenyan”. And the story gets better with the telling. Enough said.

– free beer is always good, but free beer after 13 miles is great; we passed two places where fine upstanding San Antonians had set up tents and were handing out cups of Guinness; not just beer, but Guinness. And both times, Bert and I were on the wrong side of the street. I thought about snow plowing several of my fellow runners, but luckily I didn’t…because the only thing that goes with a Guinness, is another Guinness. After we had finished and were walking back to the cars, my mother pointed to the beer stands, which had separate lines for runners. FREE BEER. It was not Guinness, but free beer is always good.

Thanks, Bert. I think I had a great time.

Half-marathon training: Race Strategy, or, I *may* be overthinking this