Five Years of Beer on UnTappd 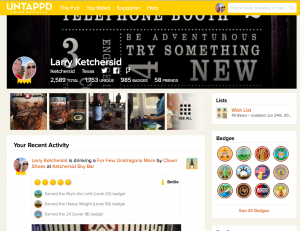 According to the Untappd app, August 23, 2017 marks five years since I started using the app. Also according to the app and website, during the last 1,826 days (plus 1 added for a leap year!) I have consumed 1,753 Unique Beers, 2,589 Beers Checked-in (not all of the beers I drank in that time frame were checked in) and earned 985 incredibly valuable badges. Â This includes the nice “For a Few Unidragons More” from Clown Shoes checked in on that anniversary date. As a Clint Eastwood spaghetti western fan and a stout lover, I really like this series from Clown Shoes.

I’ve also hooked innumerable friends onto this addictive app, and also wrote an article about the psychology of the appÂ from a gamification perspective.

As an Untappd Supporter, one can download one’s entire glutinously logged beer consumption history. Just a note for those that attempt this:

A bit of slicing and dicing later, and here’s what the numbers tell:

My list includes beers from 497 different breweries. Firestone Walker is my favorite brewery and the numbers reflect it. Also reflected is the “drink local” mentality with breweries around Houston, Tampa (where I go for business) and Austin high on the list.

While the majority of the beers were from breweries in the United States, this includes beers from brewers in 38 countries:

Out of the 134 different styles of beer tasted, my preferred styles are dark (stouts and porters) but due to their seasonality (I’d drink them year round, but most breweries release them in the fall for cool weather drinking) I cannot get the ones I want all the time. I was surprised by how far ahead American IPAs were over other styles.

There’s lots of variety in the list of 1,751 unique beers. I did not typically record every beer, but certainly did for the unique ones. Negra Modelo would be even further out in front if I checked in every one that I had. Every Mexican food dinner is enjoyed with one plus a reposado tequila of some sort. Try it!

I blame all of the Stella check-ins on Bob. I successfully avoided most of his Miller Lite temptations. (How is Miller Lite like sex in a canoe? They are both f-ing near water!). 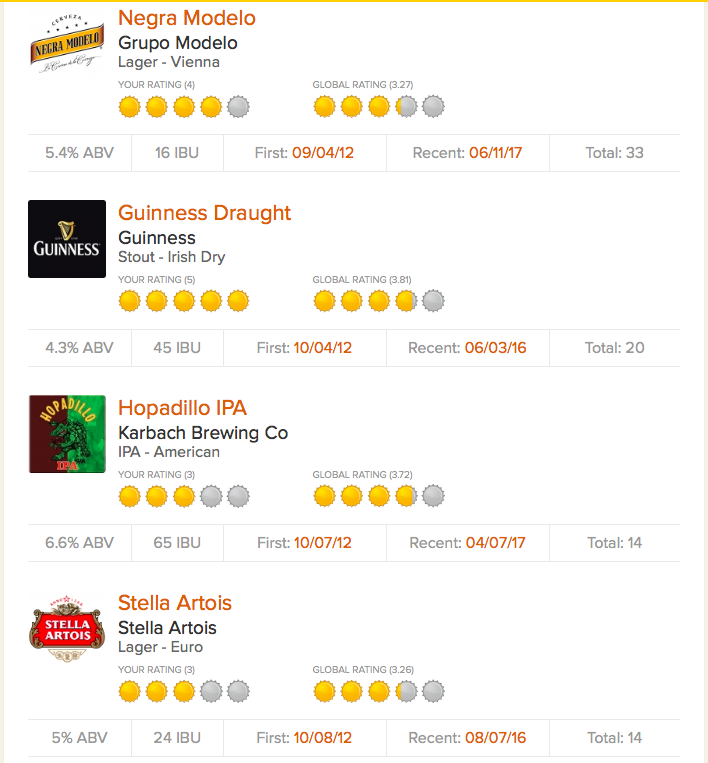 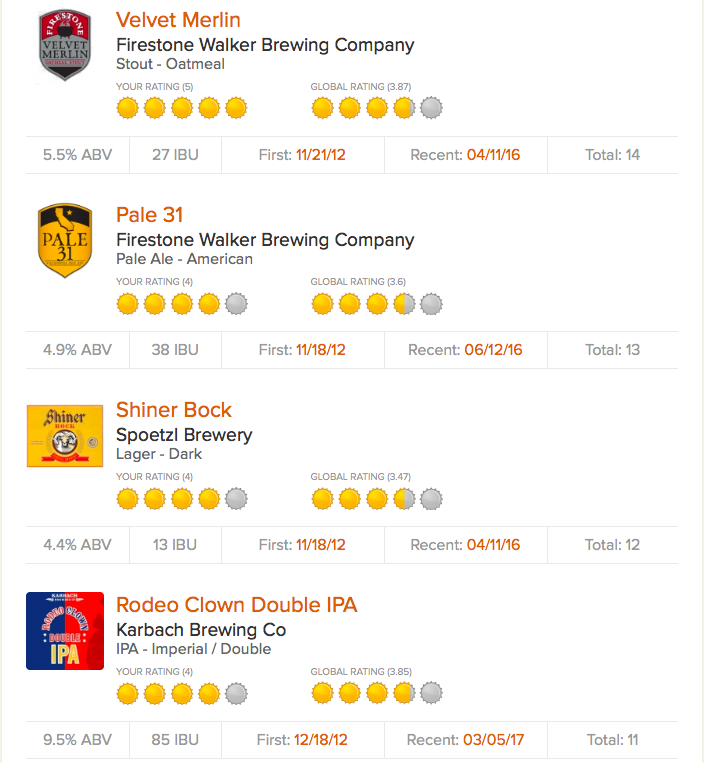 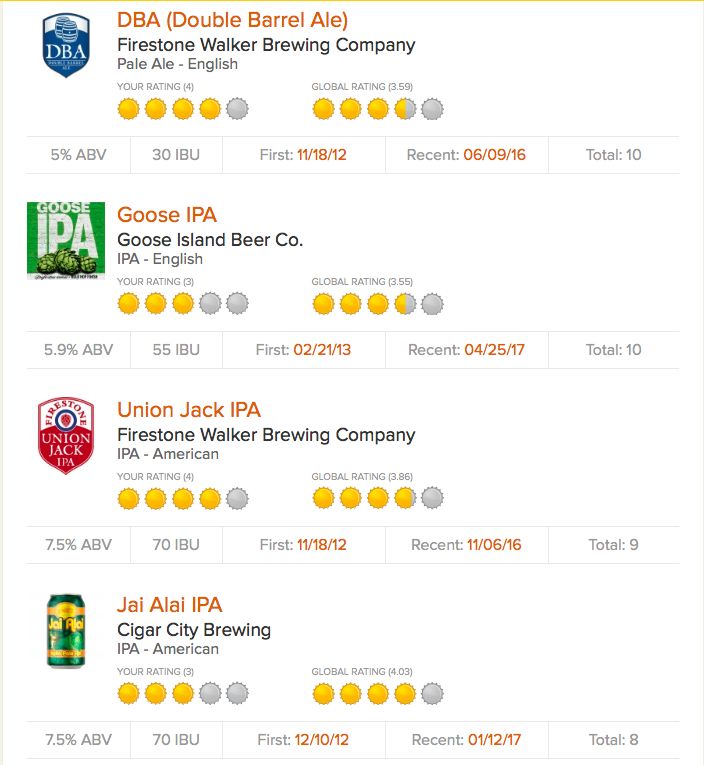 At first I thought the Untappd badges were meaningless trinkets. Now I see them as worthless trinkets, some of which show interesting trends. Untappd recently made badges retroactive, so if they announced a new badge all of your previous check-ins would count towards it. They also allowed some badges to go up to a level 100. 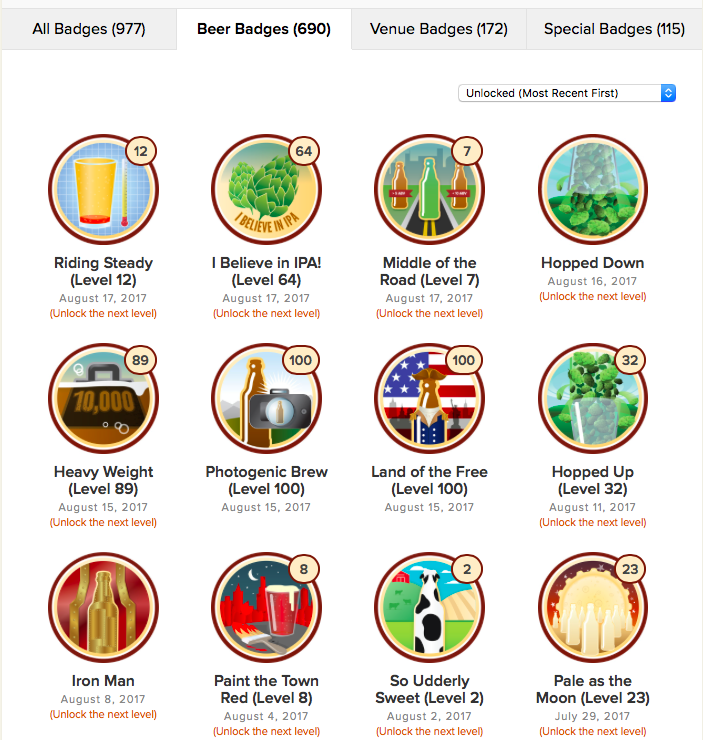 For those mathematically inclined (like me) who are wondering why Untappd says I have 982 badges but this screenshot only shows 977 – it’s because they count the “Local Badges” separately. I like the local badges, and I wish more venues would do them. And, if you haven’t tried Craft Pride on Rainey Street in Austin, you really should (they are my highest local badge). 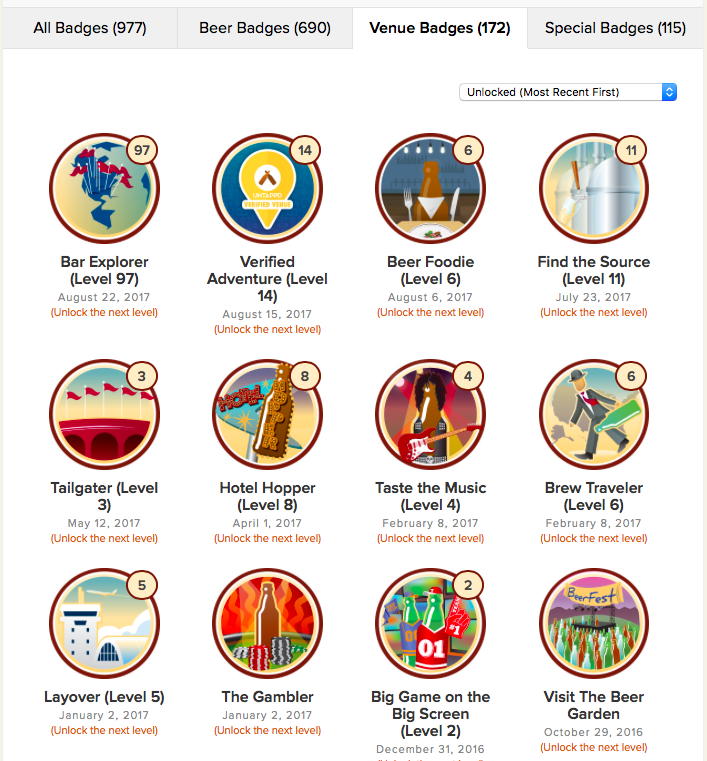 The “Bar Explorer” badge almost being maxed out is not surprising. But the “Layover” badge only being a level 5 seems to reflect what I have discovered: airports have crap beers. I’m also surprised that the “Big Game” badge is only at Level 2, but this is probably because we hit the same place for every Packers game.

It figures that the top ABV is a home-brew mead (way to go Nick!). Â There are lots of Firestone Walker and Clown Shoes brews on this list. I’ve only put the top few (ABV > 13).

Palate Wrecker is thy name! Again, only the top few (IBU > 100) are shown on this table.

Of the 451 locations I was brazen enough to check a beer in at, there are 165 where I checked in only once. Some of those were just for fun (Luckenbach Texas, Thumb Butte Lookout, The Carousel Bar in New Orleans, Leavenworth Federal Prison (the kids were so proud), Houston Air Traffic Control Tower (fly by), Hidden Corner Ewa Beach on Oahu, Grand Canyon National Park Airport, Dallas Cowboys Cheerleaders Locker Room (at the game where the Packer came back from 21 down to beat the Cowboys with a backup QB!), Â Cenote Yokdzonot (in the Yucatan), and the Bull Shark Feeding Grounds (I don’t remember where this was!).

Obviously at home check-ins were the highest. And yes, I’ve checked in 4 beers at Lambeau Field (so far!).


If you use the Untappd app, you too can get more data about your beer logging that you would ever need by becoming an Untappd supporter here.

my septic tank: it likes beer and works like your beer belly

The Psychology of UnTappd