The Psychology of UnTappd

If you haven’t heard of or used the app known as Untappd, you may not be a beer drinker. But the rise in Craft Beer brewing and drinking in America (see a good infographic here) has pushed many Americans out of their lager drinking malaise and into enjoying the multitude of tastes that are presented by the craft beer industry.

If they treated introductions like a MLM scheme, I’d own part of UnTappd by now :). And that is the beauty of the mixture of social media, location, goals/badges and history/statistics that UnTappd succeeds at: it is an app that you want to share, and after sharing, you encourage your friends to use. That psychology is what all social media type apps should strive for.

The app is simple: you have a beer, you log that beer in UnTappd. If you desire, you can include a ranking (one to five bottle caps), a location (from Foursquare’s massive location database), a picture (which, like all social media photo sharing can come back to haunt you) and a comment.

This app is free, and that, plus making it available on as many platforms as possible, is a genius move by the developers.  By simply giving users the means to track their beers, they are building a huge data warehouse of likes, dislikes and drinking characteristics (when, where, what type, with whom) that any brewery or pub/bar would be mad not to take advantage of. Breweries can register to manage their brand on the site here.

This is the opposite approach of the app which is leading in profits in May 2013 on the iOS App Store, Candy Crush Saga. Candy Crush is also free but makes revenue based on in-app purchases that help get through levels users are stuck on (note that one does not have to purchase anything to get through the levels, a user just needs patience…the fact that Candy Crush Saga is leading in revenues is a clear indicator that US app users want instant gratification and are willing to pay for it).

The appeal and staying power of the app is revealed in this chart from App Annie: since its release in October 2011, the app has stayed in the top 250 for Free iOS App Downloads and usually in the top 100. (chart after the break) 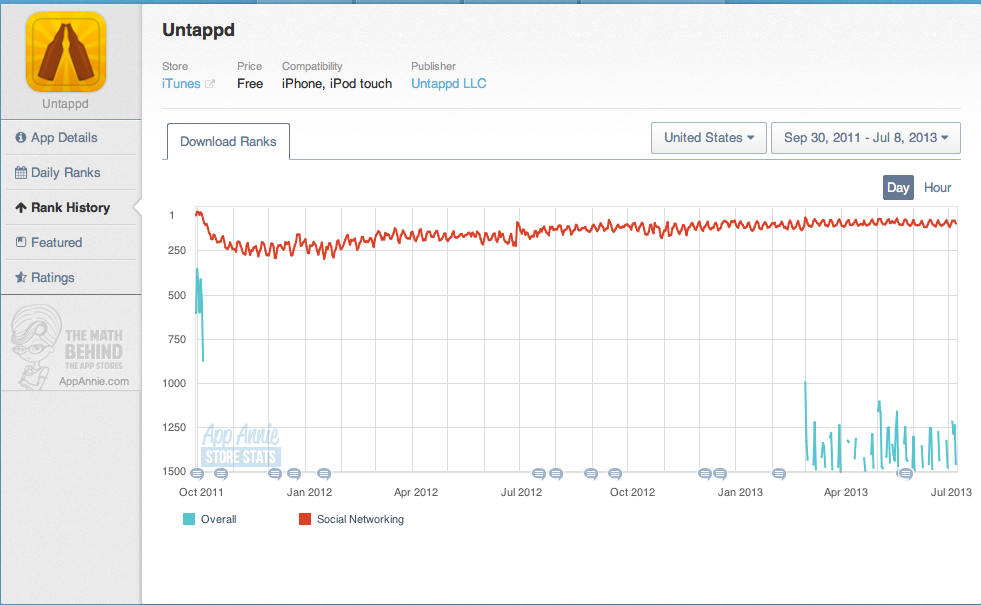 Again, it is the balance and combination of several characteristics that make this app addictive and successful:

An interesting upside to this app is that it encourages variety. One of my Untappd buddies used to drink only Miller Lite; using this app and seeing what everyone else is drinking has encouraged him to branch out and try different types of beers.

The only downside (and many would not consider this a downside) is that the Psychology of Untappd encouraged the user to drink more beer.

The obvious question I am asked is: when will Untappd make an Uncorkd, a version for wine drinkers? They could certainly employ the same app with a different database of wine and a different badge selection, and keep the location, social and photo version of it. I would certainly use it.

Five Years of Beer on UnTappd