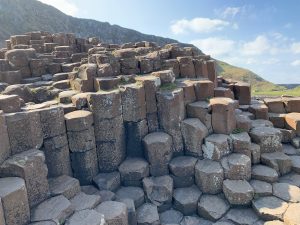 It was a long bus ride from Dublin through Belfast and up to the Giant’s Causeway at the very north end of Northern Ireland. The drive takes three hours, slightly longer in a bus with a few stops. The April day we visited was clear, cool and very windy – they ultimately closed the rope bridge at Carrick-a-Rede, one of the places we were to visit. But we made it safely to the star attraction of the tour, the Giant’s Causeway.

As the story goes…long, long ago there were these two giants – one in Scotland, the other in Ireland. The Irish giant was named Fionn Mac Cumhaill (which has been shortened over time and marketing to “Finn McCool”), the Scottish giant was named Benandonner. They didn’t like each other much and hurled insults across the narrow stretch of water that separated their two lands. Their words got a little heated, and their actions raised stones that turned into a bridge. In one version of the tale, Fionn built the bridge himself to go and fight Benandonner.

The Irish giant Finn started across the bridge, but saw that the Scottish giant was a lot LARGER than Finn. So Finn wisely turned around and ran back to his house. His quick thinking wife Oonagh disguised Finn as a baby. When the Scottish giant arrived looking for his nemesis, she said he was out working and would be back shortly. Benandonner saw the size of “baby” Finn and imagined how huge the imaginary father would be.  He ran back to Scotland, tearing up part of the bridge behind him….but leaving the formations on the Northern Ireland side that are now the Giant’s Causeway. There are also similar formations on the Scottish side, giving some(?) validity to the myth.

Below is a video of just part of the Causeway. No giants (real or mythical) were harmed in the making of this video.

Which would you believe? This tale, or that the stone columnar rock formations that make up the Giant’s Causeway were caused by volcanic activity? The myth sounds better. The legend of Fionn Mac Cumhaill doesn’t stop with the Giant’s Causeway, and actually forms the basis for the Fenian Cycle in Irish mythology. The tour group for our trip was called Finn McCool in honor of the possibly mythical Giant.

The Giant’s Causeway is a UNESCO World Heritage site.

The park and area around Giant’s Causeway have two trails – the red one that goes up and over, and the blue one that goes straight down to the rocks. 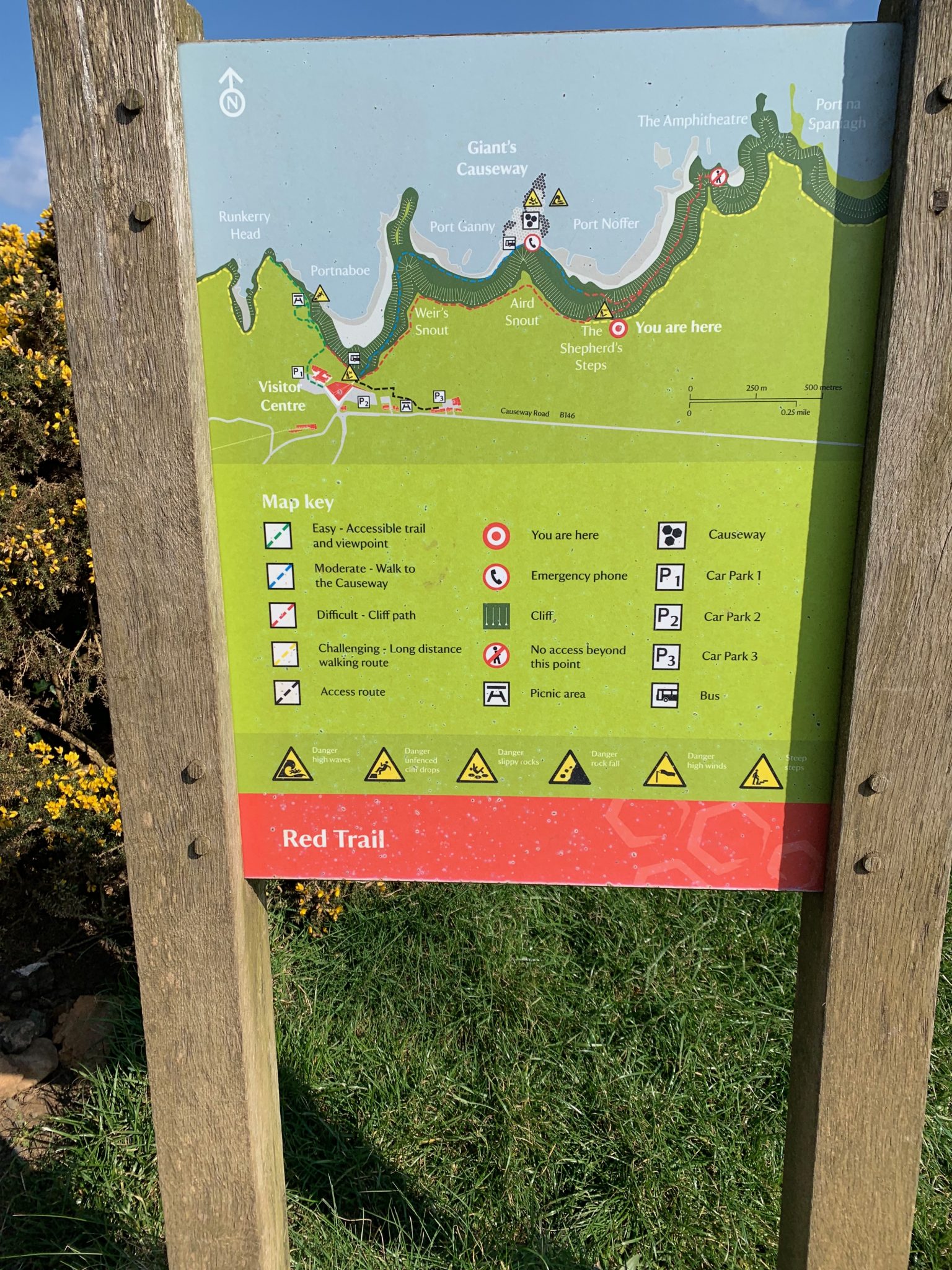 Of course on a day when they closed the rope bridge due to wind gusts up to 60mph – we chose the red trail above the steep cliffs. The view offered a great perspective of the causeway reaching out toward Scotland. 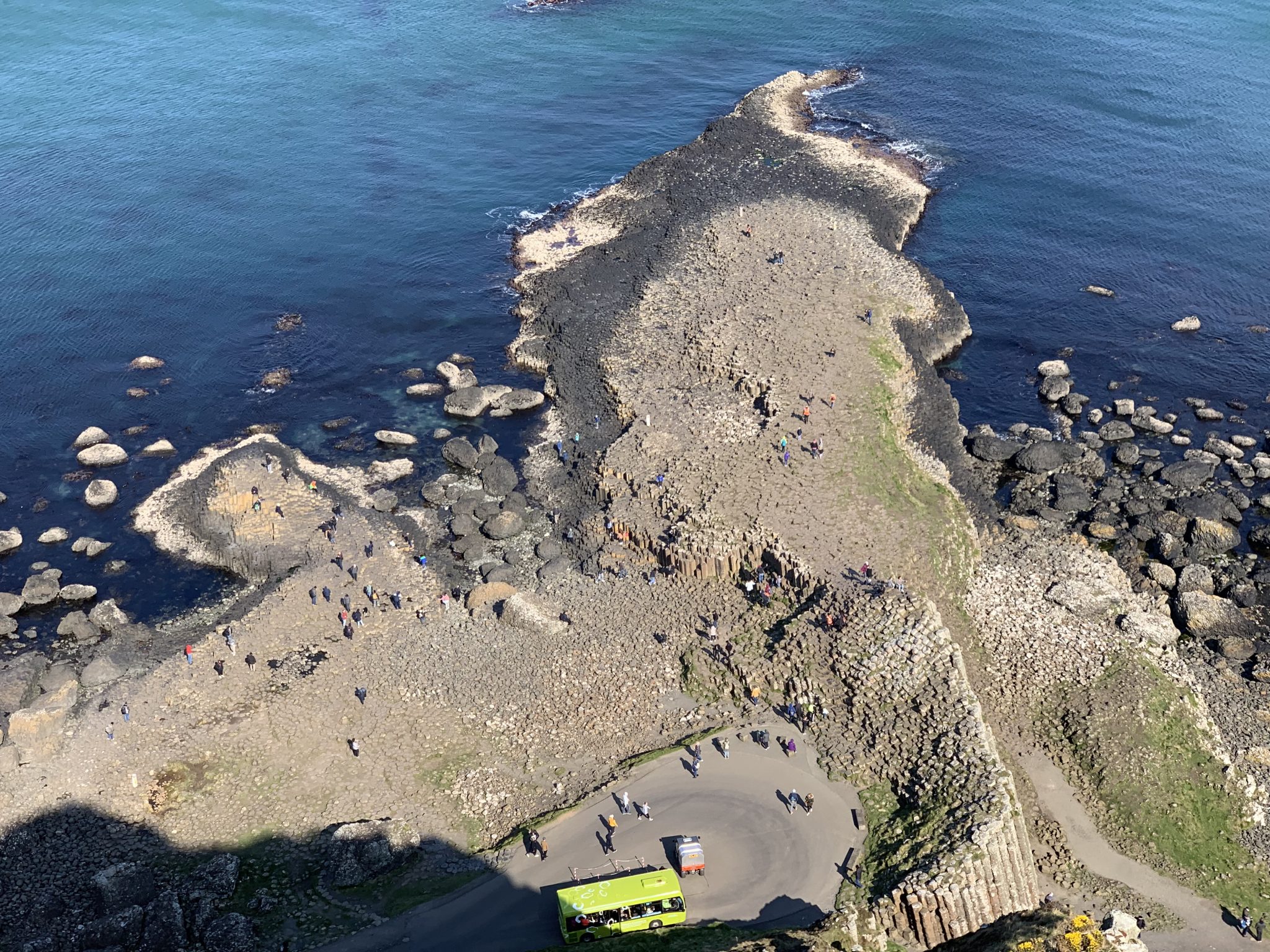 Going down the stairs (follow the red trail on the map – the stairs down start where the red trail diverges from the yellow clifftop trail) afford a different perspective. Readers can see the diverse heights of the stones in the causeway in the photo below. 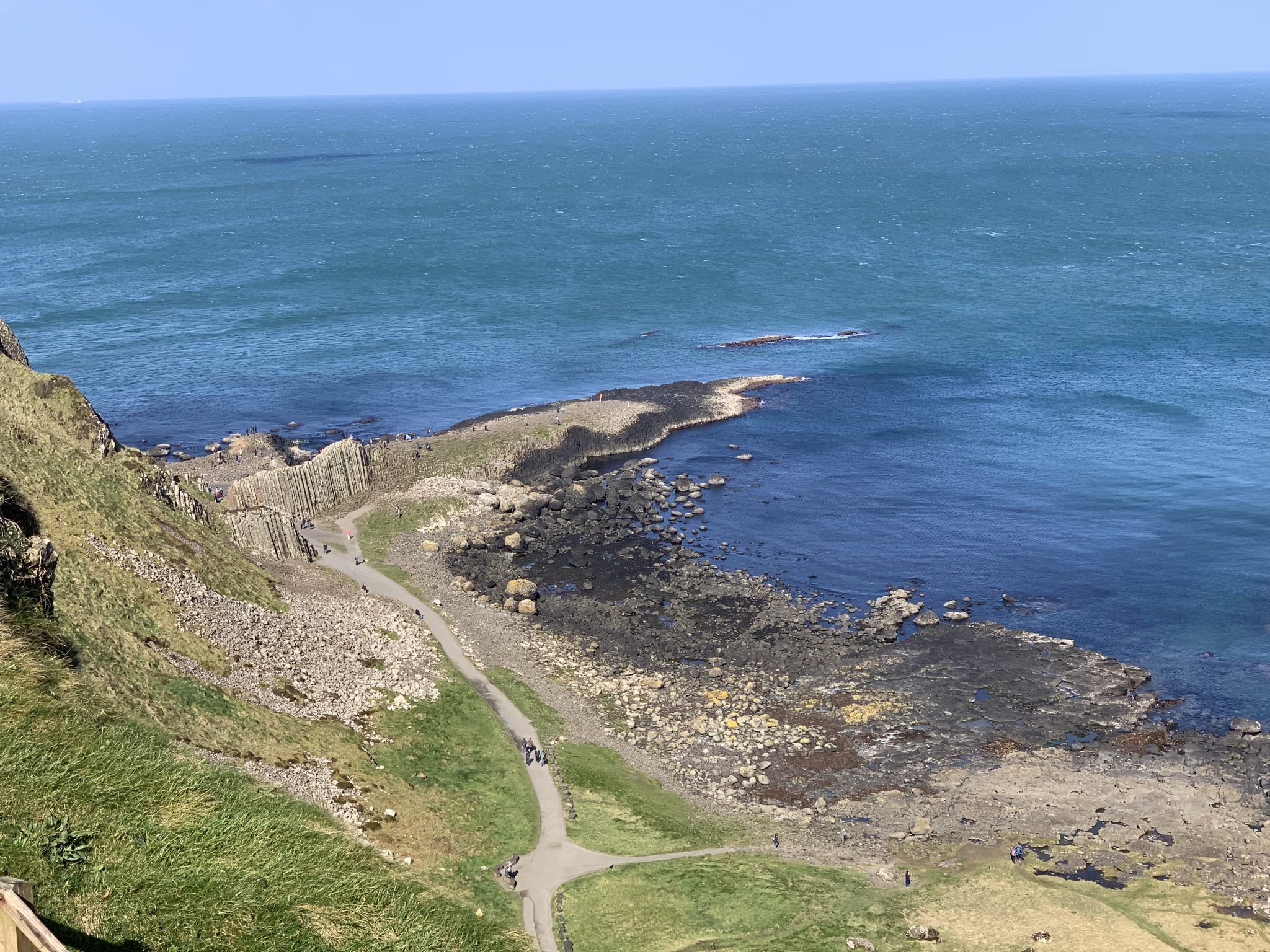 The photo below gives you a perspective as to the height of those taller pillars vs. the height of some of the humans crawling all over them. 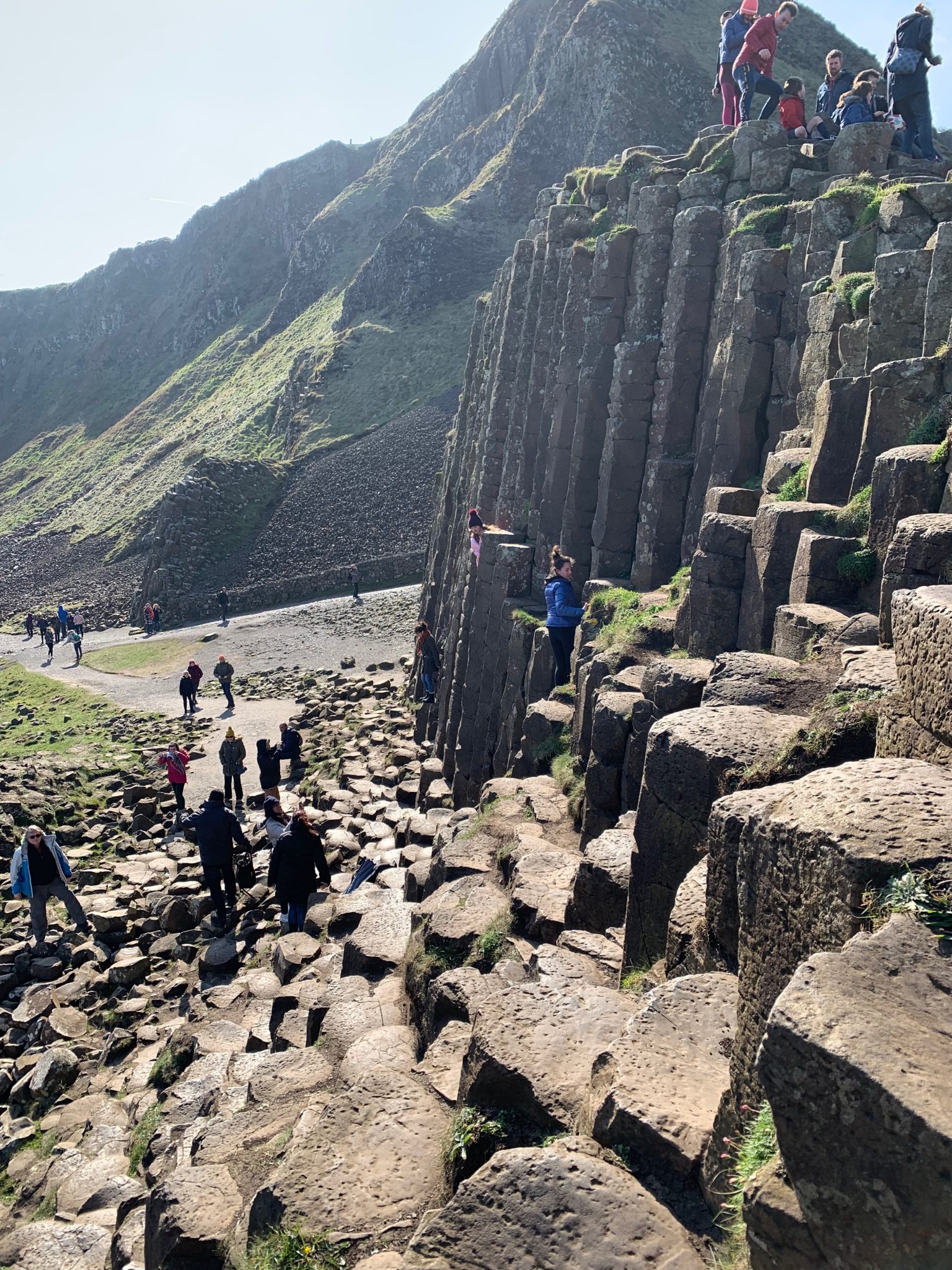 Below is a panorama of the causeway from the side opposite where we came. The clifftop path goes along the cliffs that can be seen in the distance. The staircase that descends is obscured by the cliff side. Readers can click on the image below and zoom in to see the disparity in the size and shape of the columns in more detail.

In some parts of the causeway the rocks are orderly (like they were placed there by a neat and tidy giant). In others they are a jumble (like a giant ran away quickly over them). 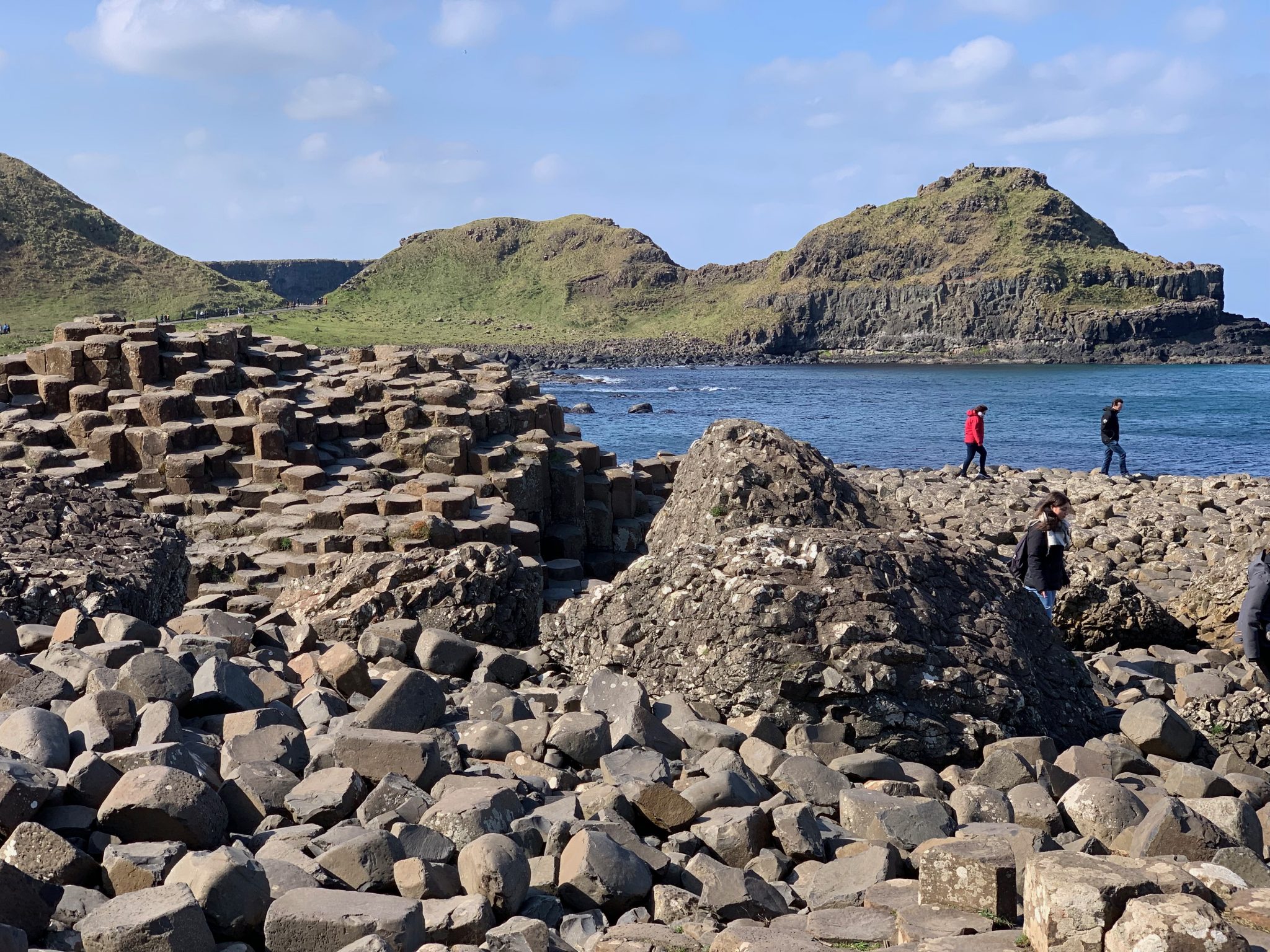 As it was cold and windy, we found refuge from the elements in a quaint pub at the entrance called “The Nook.” They served warm soup, great beer and a Bushmills whiskey to warm up my wife. 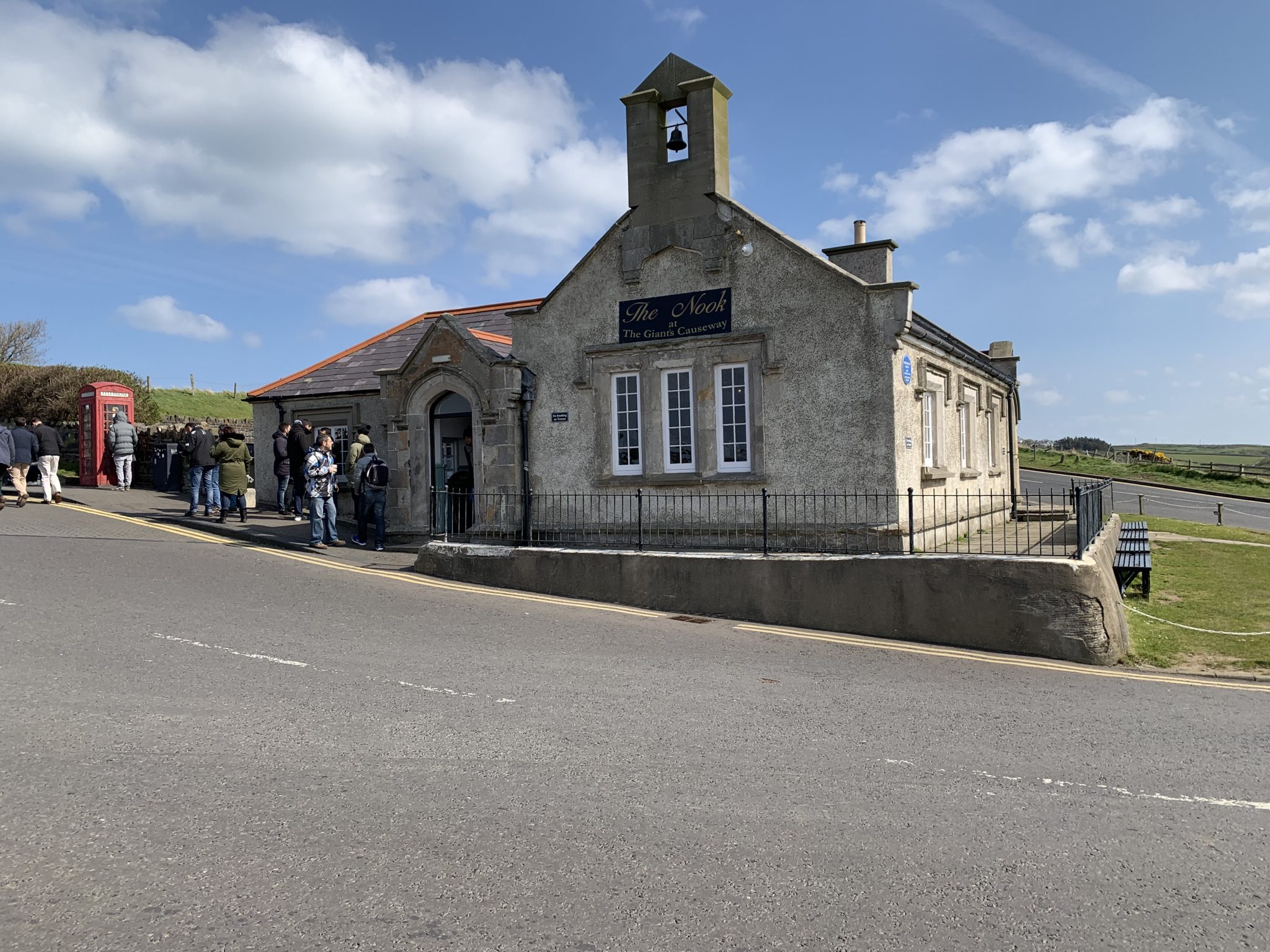 The Finn McCool bus came back and saved us from the wind. We next headed to the Dark Hedges, Dunluce Castle and Larrybane (near the Carrick-a-Rede rope bridge). 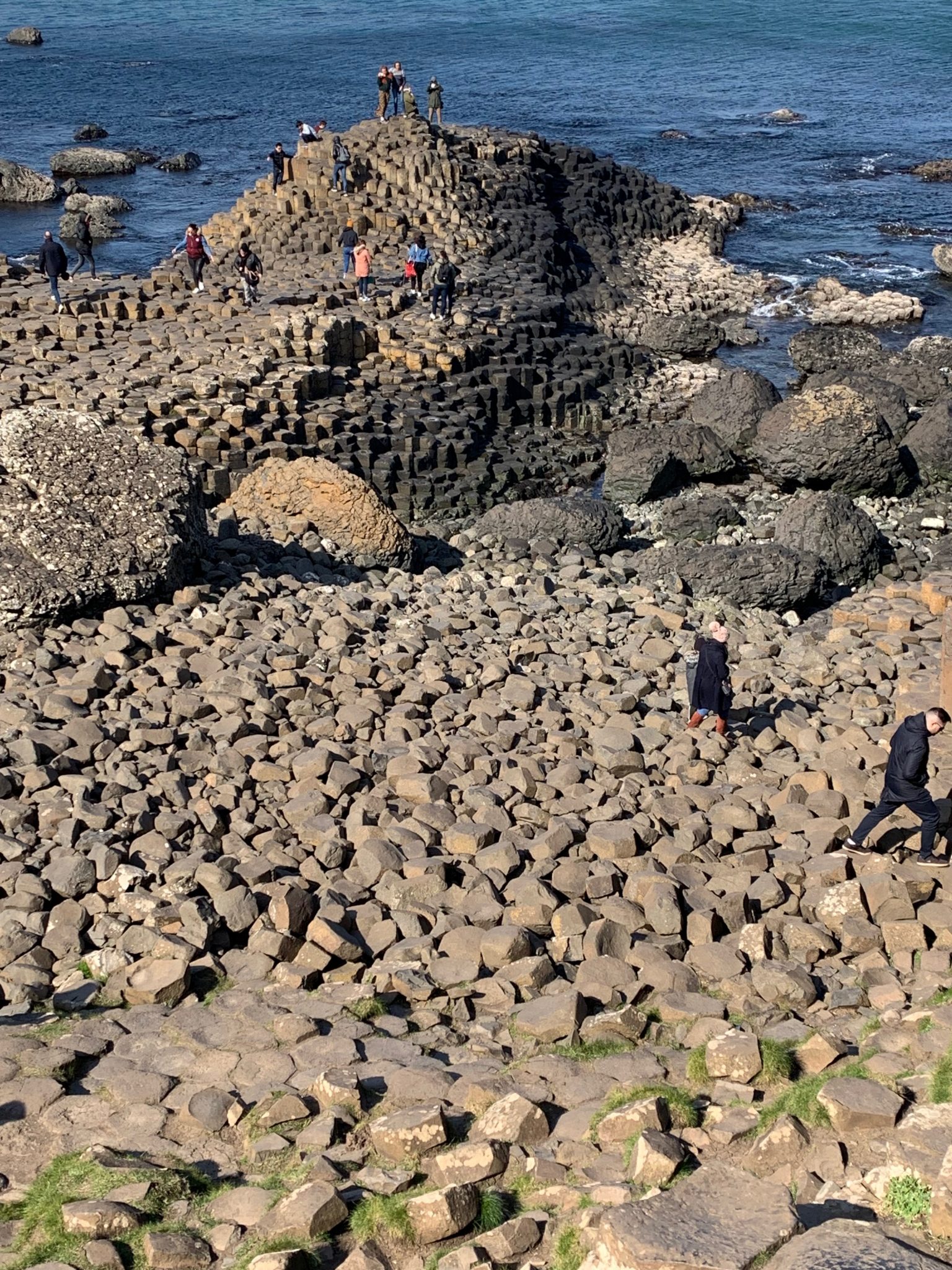