The Texas Independence Relay (TIR) is a 40 leg, 203 mile relay race with 8-12 people, from Gonzales, Texas to the San Jacinto Monument. It should 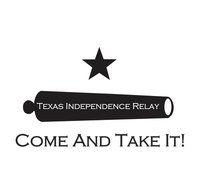 take us (we hope) less than a day and a half of straight running, starting the morning of Saturday, March 5 and ending with what I am sure will be a well-beered celebration mid-day Sunday.

This is obviously all Bert’s fault, since he was the one who got me doing my first half-marathon (SA Half, 2009); or maybe I can blame this on my brother, the doctor and marathoner, who’s run Boston a couple of times and frequently extols the virtues of running.

As Bert knows due to my complaining after we pass mile ten, I still feel there is no good reason to run a half-marathon. But he still talks me into them..and into the TIR.

Our Team, named Most Likely to Secede, consists of twelve runners(me, my brother Terry, nephew Patrick, Bert, his brother Erik, brother-in-law Ed, Andrea, Anne, Brandon, Carmen, Sarah and Susanne). We will each run (at an undoubtedly blinding pace) 3 or 4 legs of the relay, 18-25 miles total. Each leg of the relay is between 2.5 and 8.5 miles long.

Bert is the driving force towards getting a team together for the TIR. We tried to get one together for last year’s race, which would have been made up of mostly my relatives and Bert’s. But we couldn’t pull it together in time.

This year, Bert merged two groups of runners; one is a group that came together through his kid’s teachers; the other is just a bunch of ugly guys Bert knows (including yours truly). I was a late addition, as I had to verify a work trip to El Paso (coincidentally for a Texas State Historical Association meeting) would permit me to run. Bert saved me a spot.

As fate would have it, my brother and my nephew are also late additions to the team, making this truly a family affair. Bert’s brother is also running, and mine and Bert’s wives have somehow allowed themselves to be talked into driving what will no doubt be odiferous vans.

Historically, my running has been short bursts, aimed at getting my old legs ready for Rugby and Basketball. There was no good reason to run a half-marathon back then, it felt liked you’d run one with a tank running across you every so often after a couple of Rugby matches in a weekend.

As usual, my wife was my main motivator to get running. After Karate (good exercise, little running) and two knee surgeries (I will never dunk on Vercie again), I contented myself with little to no exercise. Then, I was invited to participate in a Master’s Rugby tournament (Master’s = old guys), and needed to get into shape so I didn’t get hurt too poorly. My wife turned me on to a program called P90X, and gave me a Nike+ iPod (which, for a numbers geek, fuels the obessions cause it keeps track of everything). I’ve been running for about five years now, down from my Rugby playing weight of 195 to around 170-175.

The TIR will be an exceptional event. I’ll get to race with my brother and nephew for the first time (we’ve run together but never in a race); we’ll get to run through the dead of night (which I usually only do when being chased); I’ll have to attempt to run with no headphones (but the geek in me MAY figure out a way around that); and we’ll get to have a great time with family and friends new and old.

Here’s hoping for no rain, no early March heat waves, no injuries, few mosquitos and the pure enjoyment of a historical race.