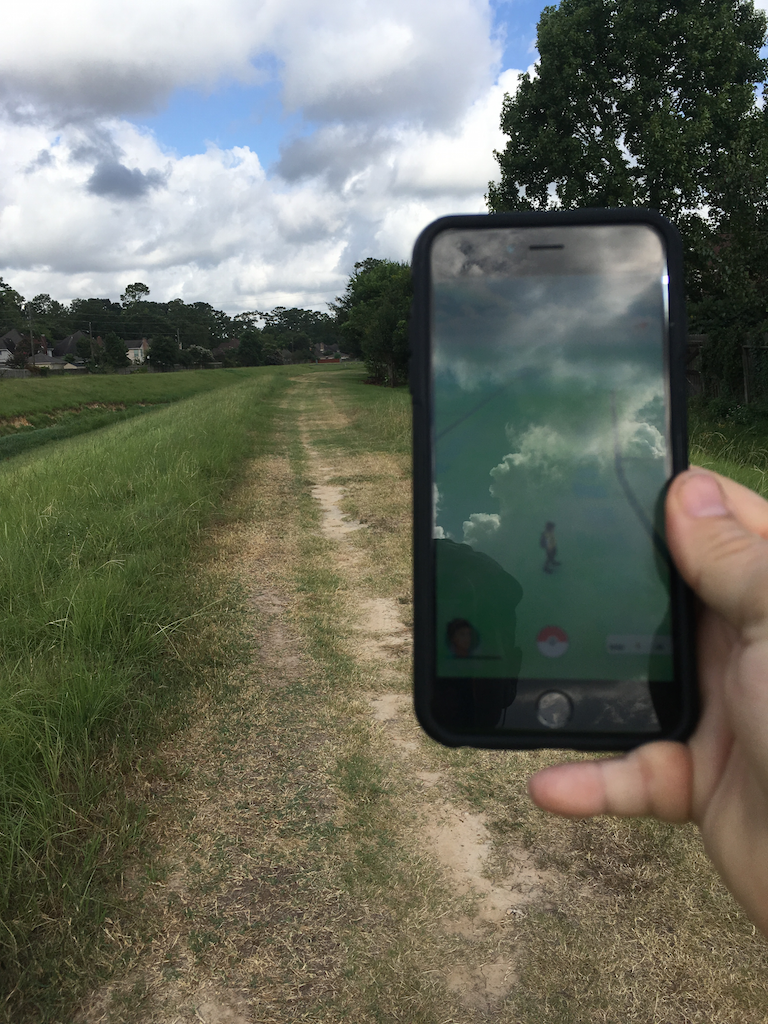 Back in the day, my son collected Pokemon cards, played Pokemon on Gameboy, and taught me about Pikachu, Snorlaxes, and other interesting creatures…as I’m sure the kids of many others my age did. As my son grew older, he gave his Pokemon card collection to someone much younger who had more enthusiasm (a very generous move, one he semi-regretted when he saw the prices for some of those cards on eBay!) and moved on to other things. Now in his mid-twenties, my son and I are playing Pokemon Go, semi-together from 200 miles away.

Despite the articles about “nerd herd” and getting the geeks out from behind their computers (which is a pretty good thing, IMHO), in addition to the afore mentioned family camaraderie (and I loudly applaud those friends of mine that are actively playing with their kids), there are other obvious reasons certain people should become familiar with this app/game:

Pokemon Go is the top Free app (with in-app purchases) on the Apple App Store and Google Play Store in the US, the UK and multiple other countries, and has been there since it’s release. It is the fastest app to reach 10 million downloads worldwide, reaching that mark in seven days (source). It also currently leads all apps in daily usage time (i.e., how long do users actually have the app opened). (source).

It did have a bit of a head start in both content and database: 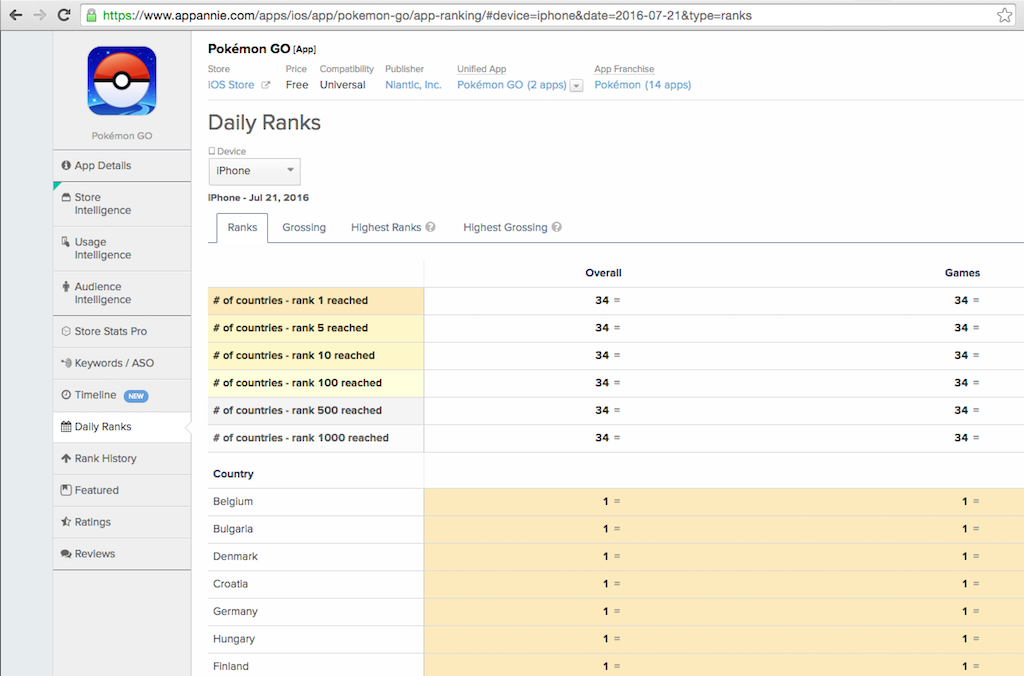 There are some characteristics of the game that are familiar, especially to those familiar with previous pokemon games. But the basics are similar to anyone who has used any count/goal based program: collect everything and level up. This is a common development model, whether it is for a beer drinking app like Untappd (see my breakdown of the Untappd app here), a healthcare/shopping app like Walgreens or game apps. There are badges for most everything (similar to programs like Untappd) though I seem to rarely look at them, other than for counts. 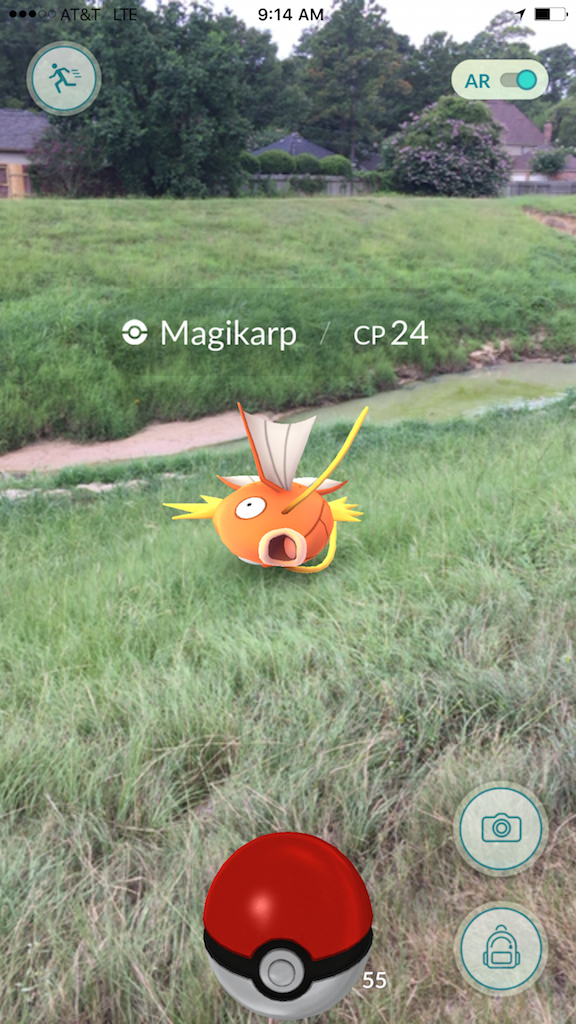 There are some characteristics that are missing,

These are holes that will be filled, either in future releases or by independent developers. There are already examples of an entire ecosystem springing up around the game; Chat apps (see this developer’s app blog) as an example, I assume to be used to tell people when a rare pokemon is near. There are also several hacks, such as maps that use the app protocols to determine locations of pokemon, pokestops, etc. (most of these can be found in the pokemondev sub on reddit). Some of these are getting shutdown; one even mentioned a “cease and desist” order.

The “augmented reality” piece, where you can use your device’s camera to see pokemon on the background of the real world, is interesting but unnecessary in this game. It is such a battery sucker that I do not know of any players that have not yet turned it off. It is being used primarily as a novelty (I found a pokemon at a landmark) or by businesses to lure pokemon hunters in.

The estimates of how much the game has made the various parties varies. One estimate says that Apple, purely on the percentage that they receive from in-app purchases through the app, will make $3 BILLION in revenue over the next couple of years (source). Since Apple gets 30% of in-app purchases, that would imply an estimate of $7 BILLION in revenue for Niantic (one would assume this gets shared with Nintendo for licensing).

There is, of course, no need to spend money in the game if you choose not to (full disclosure: I do not). Sensor Tower is estimating $1.6 million per day in the US spent. And the app has not yet been launched in Japan where the average spend per mobile user is higher, and the Pokemon craze is even more rabid.

Nintendo’s stock price doubled following the release of the app (chart here) though it has retreated a bit from those highs.

Local businesses are taking advantage as well. Yelp now lets users filter based on pokestop locations. Many shopping areas and downtowns will have multiple pokestops near them. In the game, there are items known as “Lures” which do what the name implies (they lure pokemon to a pokestop for 30 minutes). When this happens, the pokestop lights up on the map, shooting purple pieces up like flares. Small businesses near pokestops are dropping these lures to lure people in while they hunt. 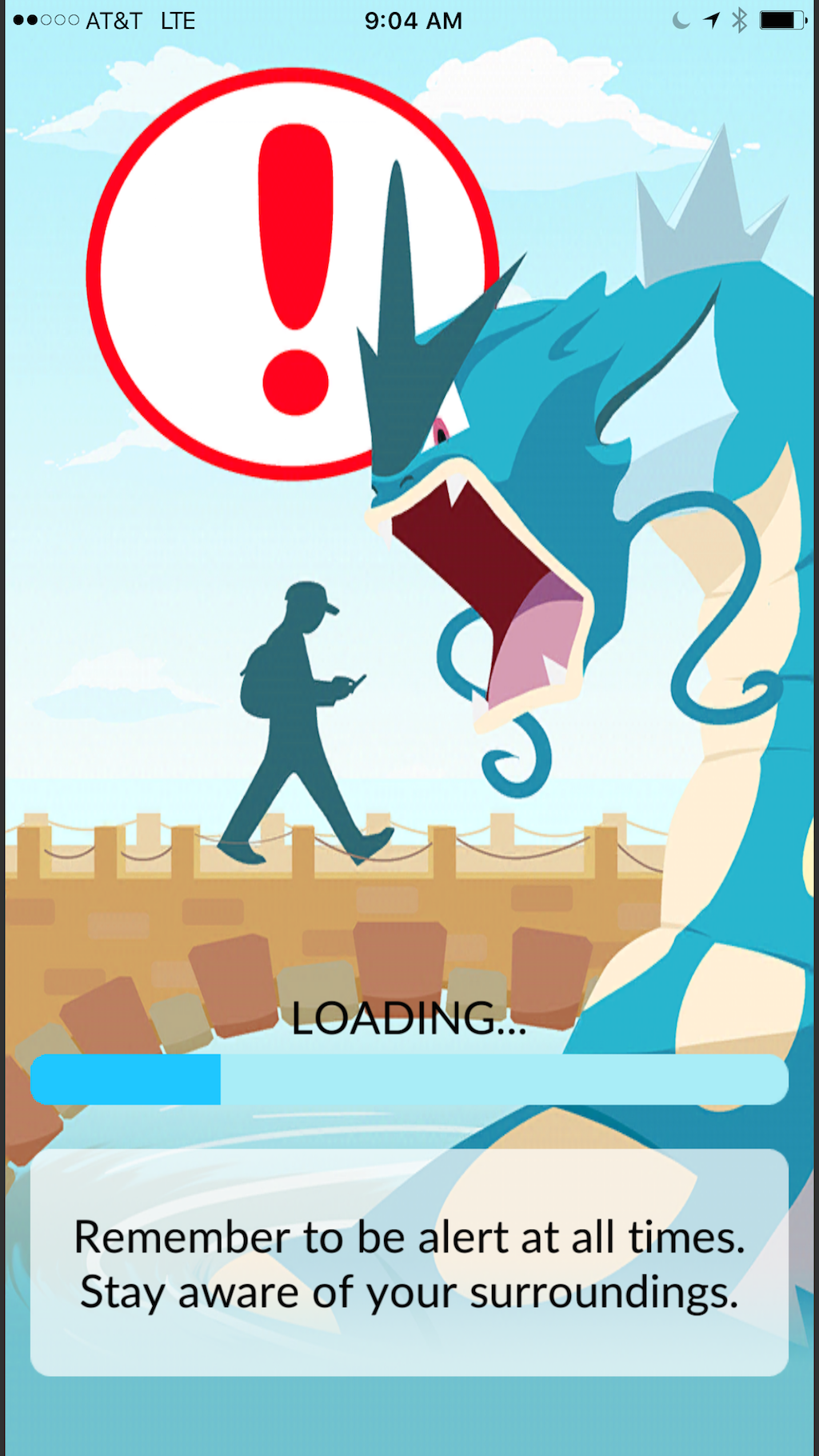 Pokemon Go is almost as well-known these first few weeks for server crashes as it is for having more users than most other applications. Since Niantic spun out of Google, one would assume that they have Google infrastructure. They don’t have Amazon Web Services (AWS), as the Amazon CTO has humorously repeatedly offered health over twitter whenever the servers are down.

As the game added multiple countries over this past weekend (July 16), the servers supporting the game crashed repeatedly, causing the game to be in operable most of that Saturday morning.

The image on the right is all that the players see. There is no notice that the game is having server issues. So users either continue to press “retry” (which comes up after a few minutes of this screen) or kill the app and start over…both of which cause more login attempts and impact on the servers.

From a capacity planning standpoint, one would assume that there would be a trending analysis done on the initial implementation based in the United States before adding in the multiple additional countries. Either this was not done or it was done incorrectly, causing capacity to crash the servers.

This is tolerated somewhat humorously (check out the Pokemon Go reddit forums for examples) for now. But if there are tours, events and other plans made around the app ( as there were that Saturday), this will not be acceptable by the user community for long.

Interestingly as of this writing, Niantic is advertising for a Software Engineer – Server Infrastructure...probably a much needed position just now!

My fellow joggers: we have an enormous advantage in this game of Pokemon Go. And this infuriates my son…and is the only reason I can even begin to keep up with him in this game (and with the many teenagers that are on summer break and do not have to work). That advantage is that mileage matters in several different facets of the program: 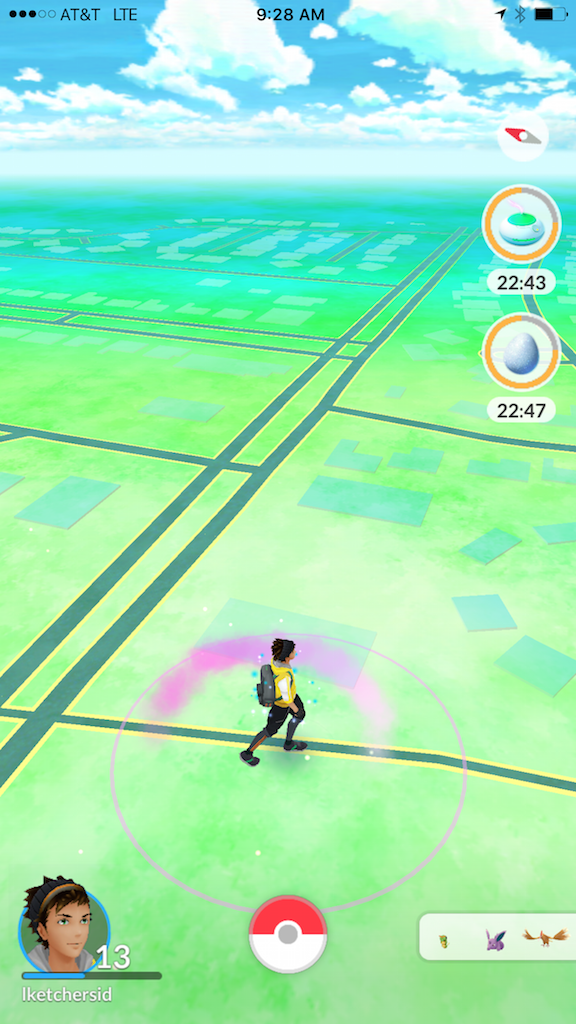 It may be obvious, but the downsides to running with the game are:

I have an old Google Glass from an earlier development project. Glass would be a great accessory for this game, and for all games that combine real-world with augmented reality. The ability to see landmarks and have heads-up display facts and stats was one of the benefits of Glass. Unfortunately, the issues it had, particularly with battery life, would have to be fixed. And it had a sweat problem (i.e., sweat be bad for Glass). But image just running along and speaking commands to Glass about throwing Pokeballs…those that make claims of “nerd herd” would have a field day with that one!

My current collection is below. Have fun! 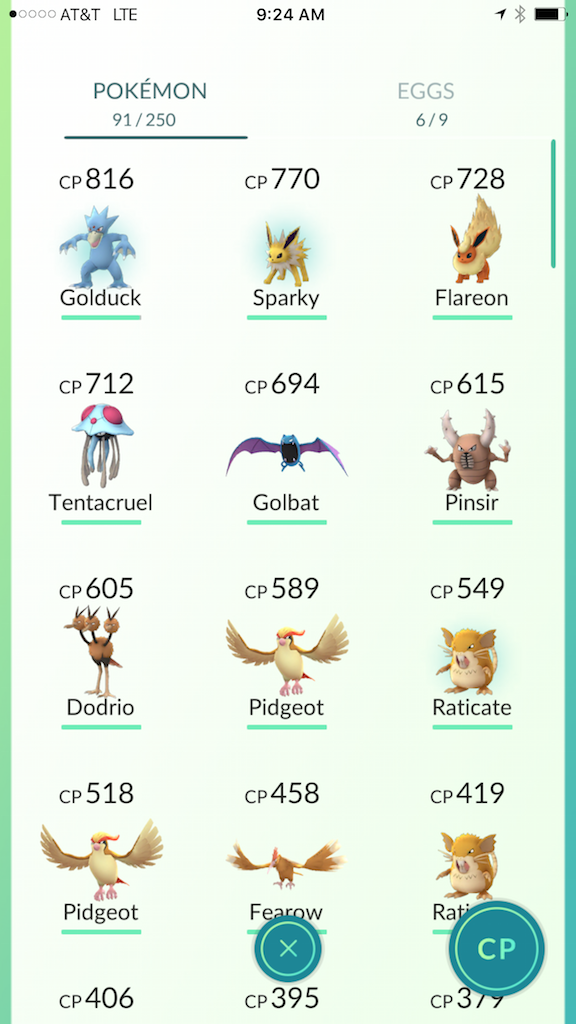