April 11
It was 13-17 degrees in the morning, causing the snow at the top of Bright Angel Trail to turn to ice. The plan was to leave at 6:30AM, but my brother Terry and I plus our guide Dewey (who was always on the river, so this was his first hike 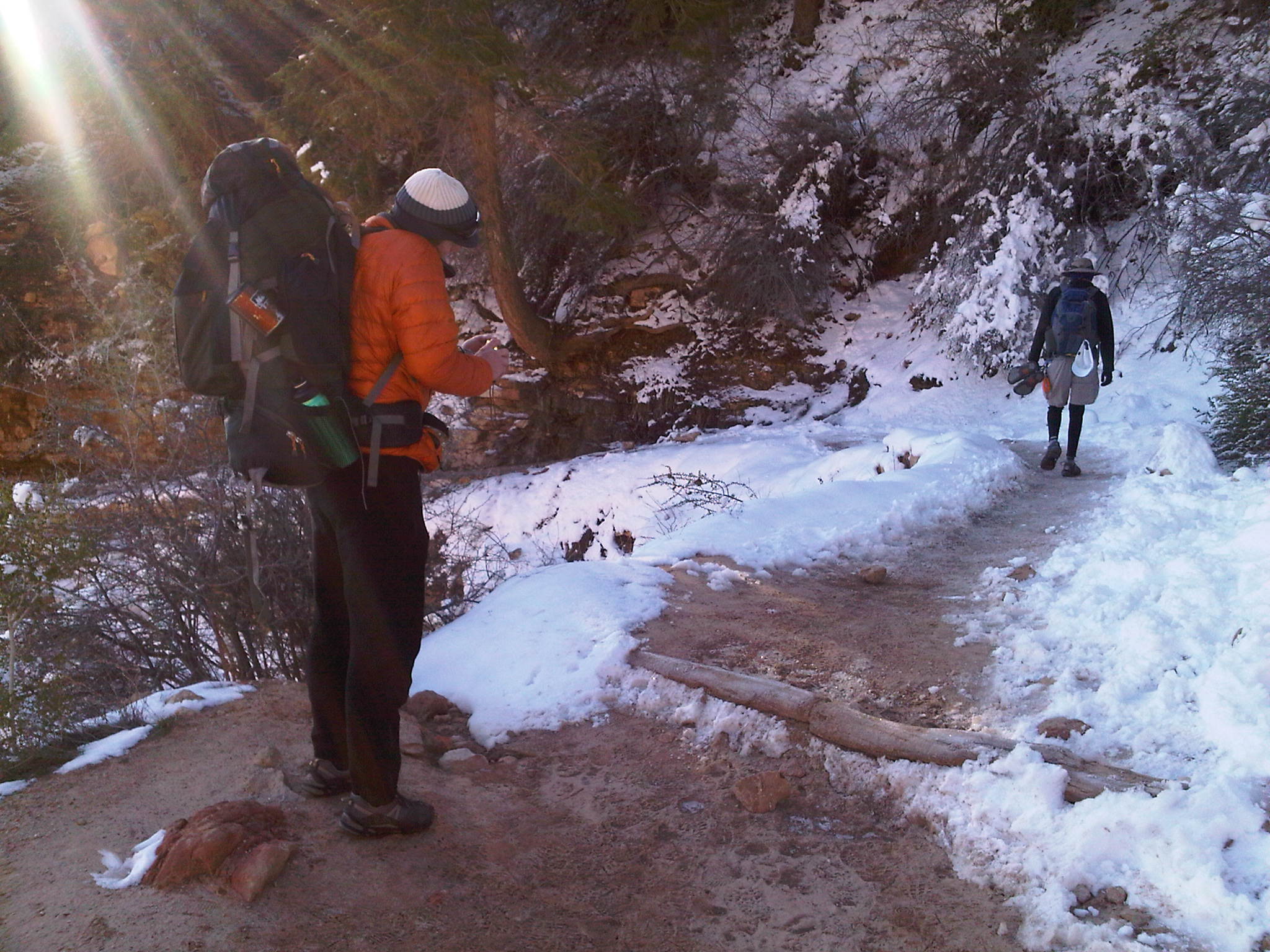 down from the rim) needed “yak tracks”, spiky soles that attached to the bottom of your shoes. The gift shop operator was nice enough to open a bit early, so we got on the trial about 15-20 minutes later that the rest of our group. Being from Texas, I was skeptical about “a little ice”. But for the first couple of miles, it would have been quite dangerous without the “tracks”.

I had my Blackberry (ok, start with the geek jokes, but I was “testing” for a new app we are writing….seriously) and had coverage all the way to Indian Garden. While in the ice, my mom called…then Dewey called his mom. Hiking down one of the natural wonders of the world, through the ice, with yak tracks, talking to our mothers…serious geek bonding there. Dewey had no idea what was in store. 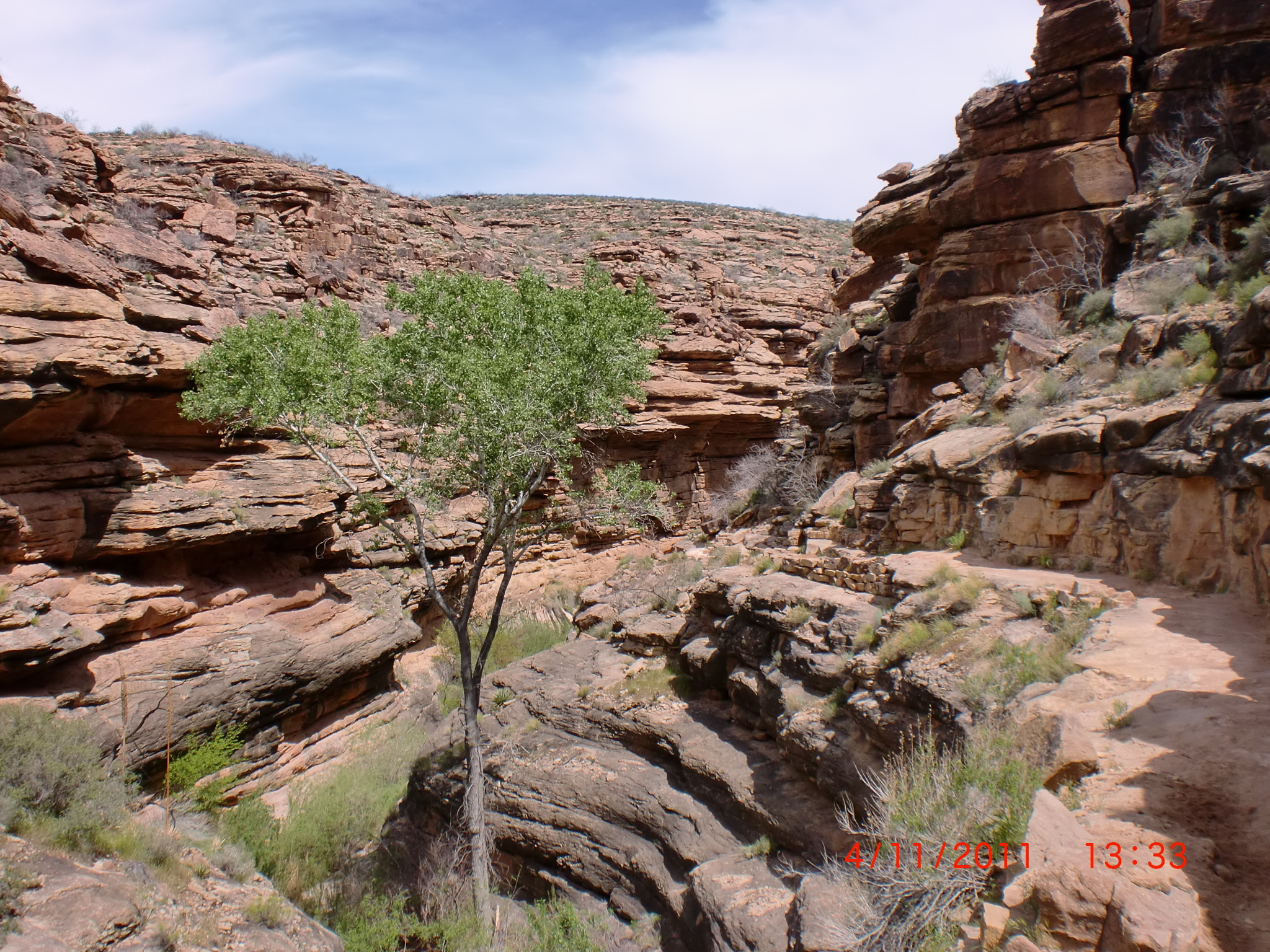 Bright Angel Trail, the most travelled trail in the Canyon, from the South Rim is 7.8 miles to the Colorado River, and a bit more than nine miles down to Phantom Ranch. Given the weather in April, we went from snow and ice covered rim, to the red rock region, to woods of cypress, more rocks, then the river. The hike down was tremendous, made more memorable by Donny’s tenacity, hiking down with one bad leg using two walking sticks. I hiked down the first bit with Terry and Dewey, and we caught up to the rest of the party at the first or second bathroom station. Then our hikers spread out, and I was with Mike and Mark down to Indian Garden. Indian Garden is the halfway point, and, since our groups had spread out, we waited about 45 minutes for the rest to arrive. 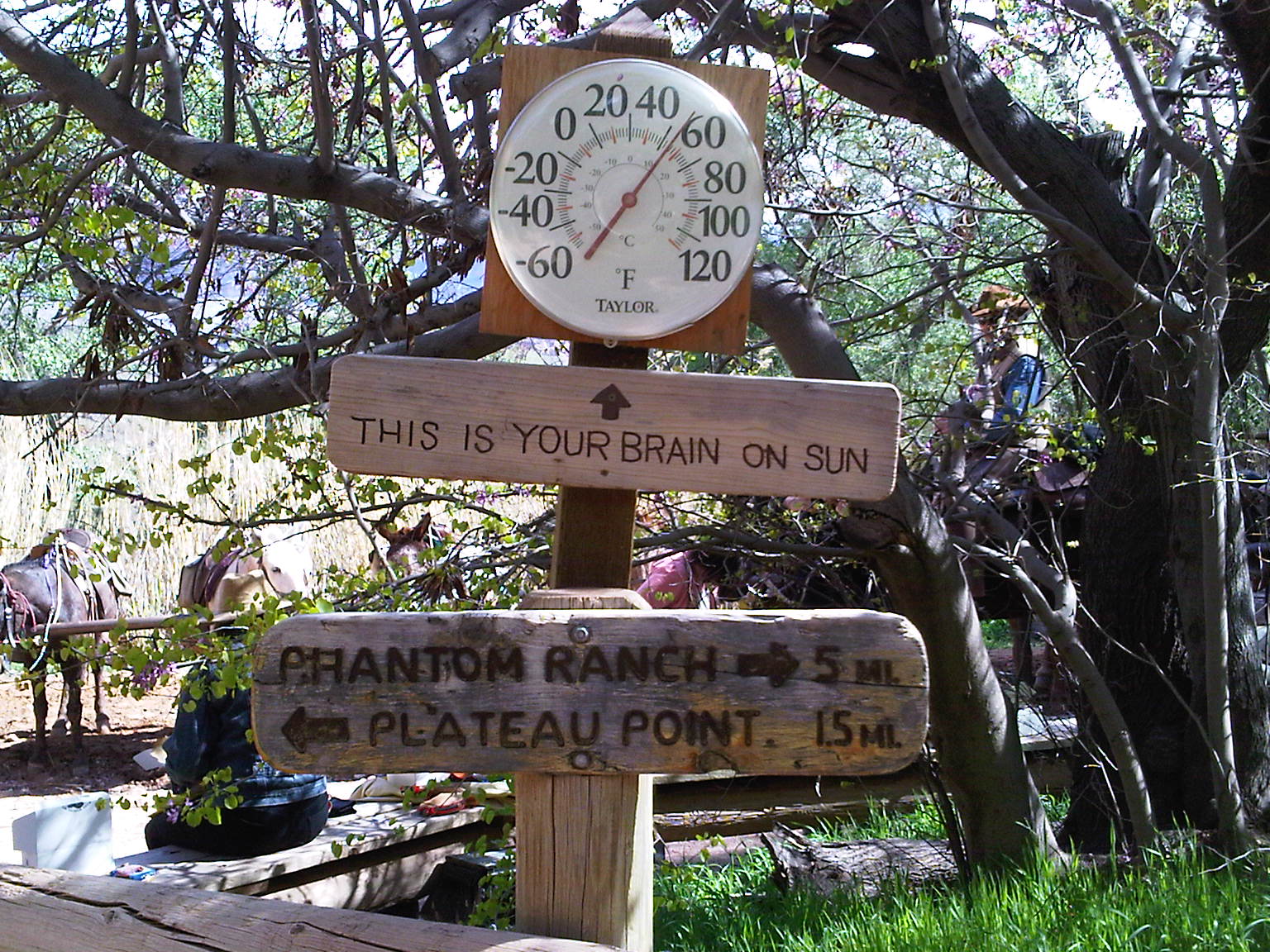 It was about 50 degrees at Indian Garden The elevation at the Rim was 6860 feet, and Indian Springs was around 3800 feet. We would drop a bit more to get down to the 2400 foot level at the river.

The remainder of the hike was rocky, with a lot of switchbacks and a spiral down close to the river, withsome narrow parts of the trail with steep cliffs that had the nerves of the “height sensitive” ones in our party clinging to the walls. 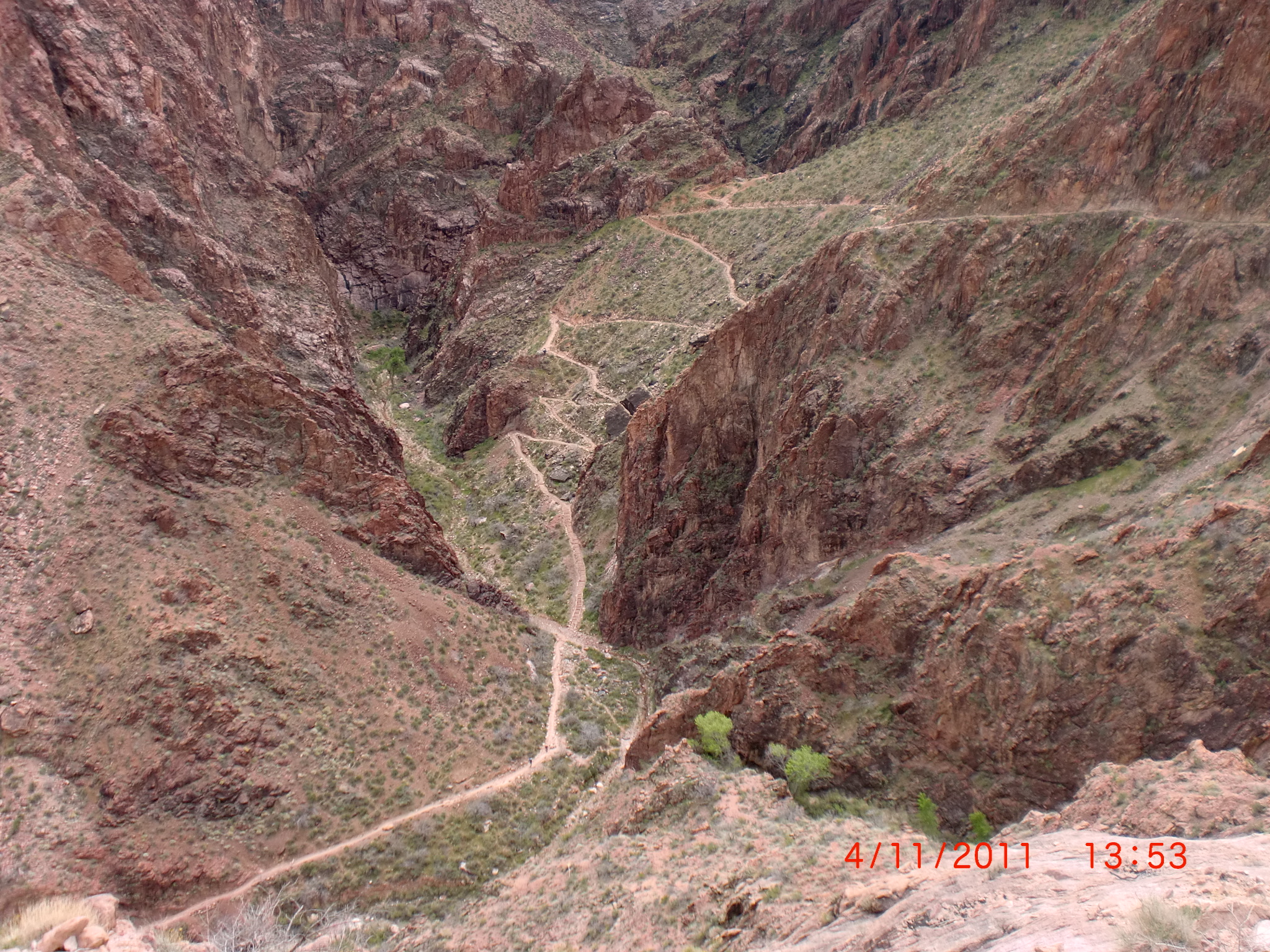 I was in the lead group as we got to the river, where we met Walker, our other guide and boat captain. We did not have enough time to hike to Phantom Ranch (another 2 miles or so, through some sand), so we had a sandwich and donned our river gear. My preparation was somewhat lacking, I had opted for swim trunks and a waterproof jacket. Given how cold we would soon find the waters of the Colorado, I was lucky that TerryT had an extra pair of rain pants. 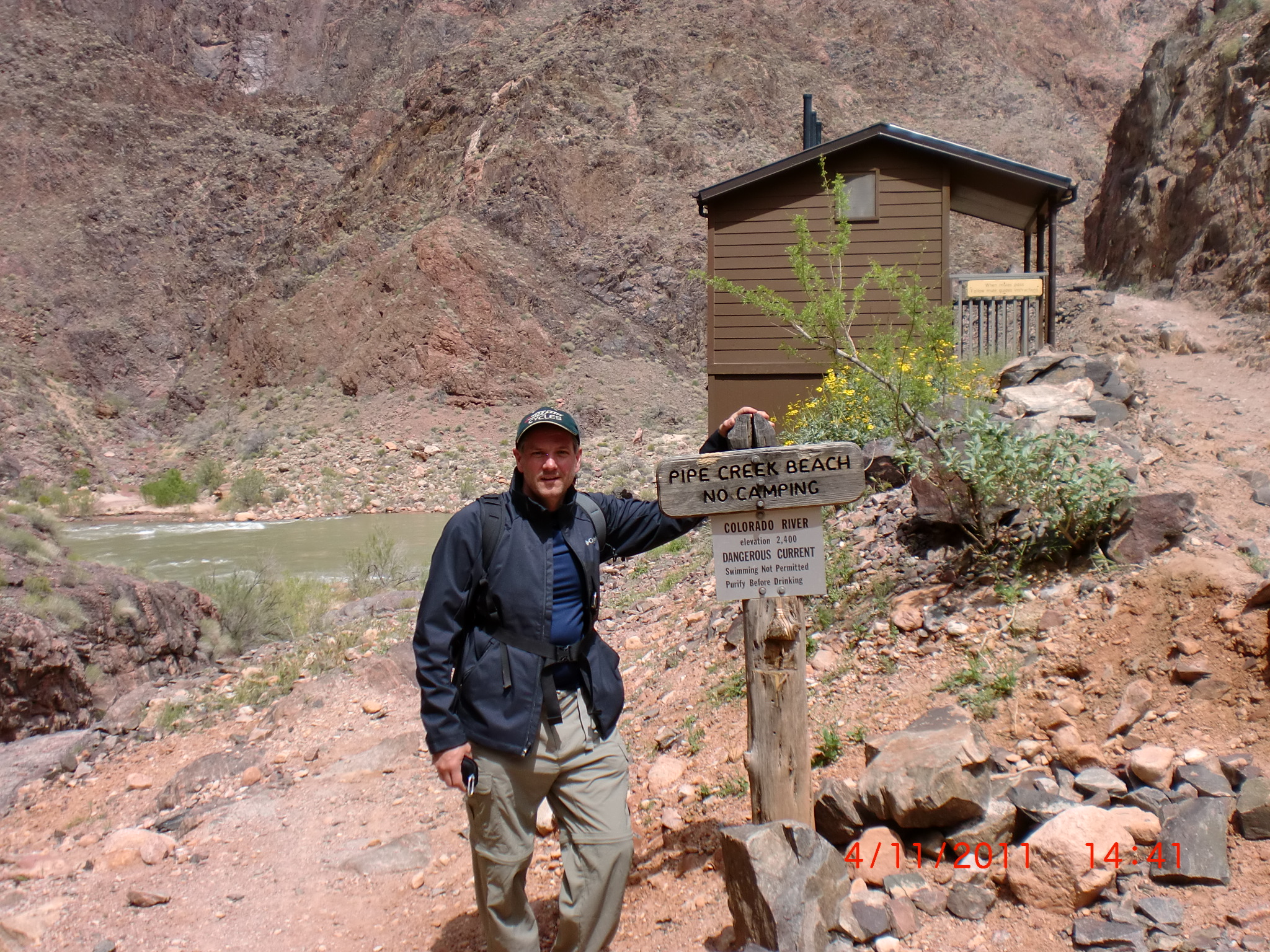 We got our first glimpse of the boat that would be our transportation for the next four days. For some reason, I thought we were paddling, and I was trying to envision the complexities of drinking 15 cases of beer whilst paddling (not to mention how we were going to do 100 miles in four days). The boat was powered, with a air pontoon, metal point and large metal ice and storage chest from side to side. The platform in the front where most of us sat would double as our kitchen tables when pulled up. Everything had its place, quite compact. 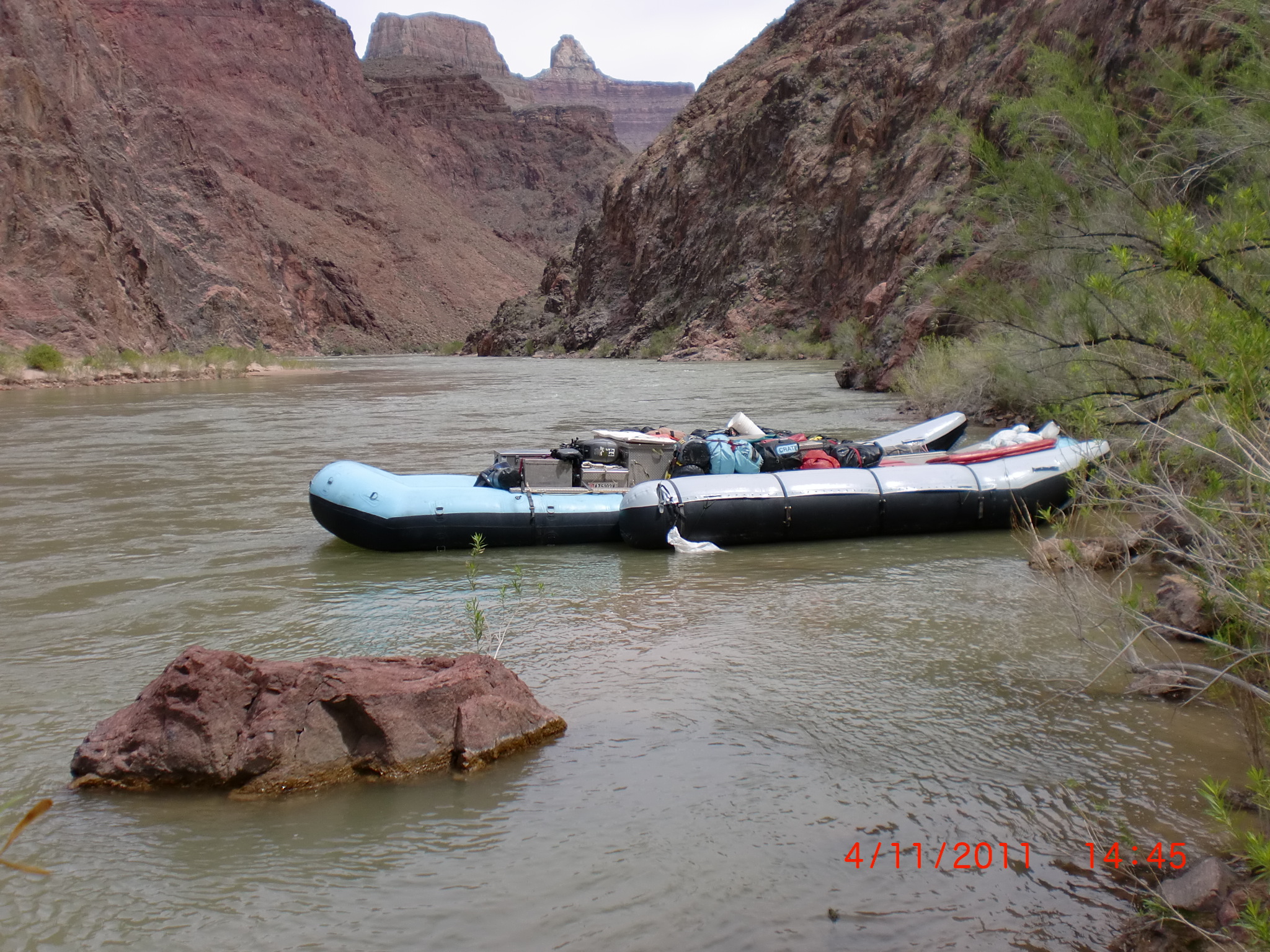 I went back up the trail to meet the final group, which had my brother, Ron, Donny and Dewey, and took them lemonade and sandwiches. We got everyone to the boat except Donny, who I stayed with at the beach while the others loaded and brought the boat down. While waiting, we met a very excited Japanese gent named William, who had us take his picture while he was in the Colorado.

We got Donny and I loaded at Pipe Creek Beach, between mile 88 and 89. Our destination, Whitmore Wash, was 100 miles down river and four nights away.

We camped that night at Schist campground, near mile 96 (only 8 miles today). Dewey and Walker showed us a glimpse of things to come by serving us halibut, which I eased down with a martini made with Tito’s Vodka I had packed down (thanks to TerryT, I owe him a bottle).

This was my first time sleeping outdoors in a long while. It was a bit cold, but the cot, with two sleeping bags, with the moon half full, and a great view of the stars, was excellent.

Get my Grand Canyon app on the Apple App Store. 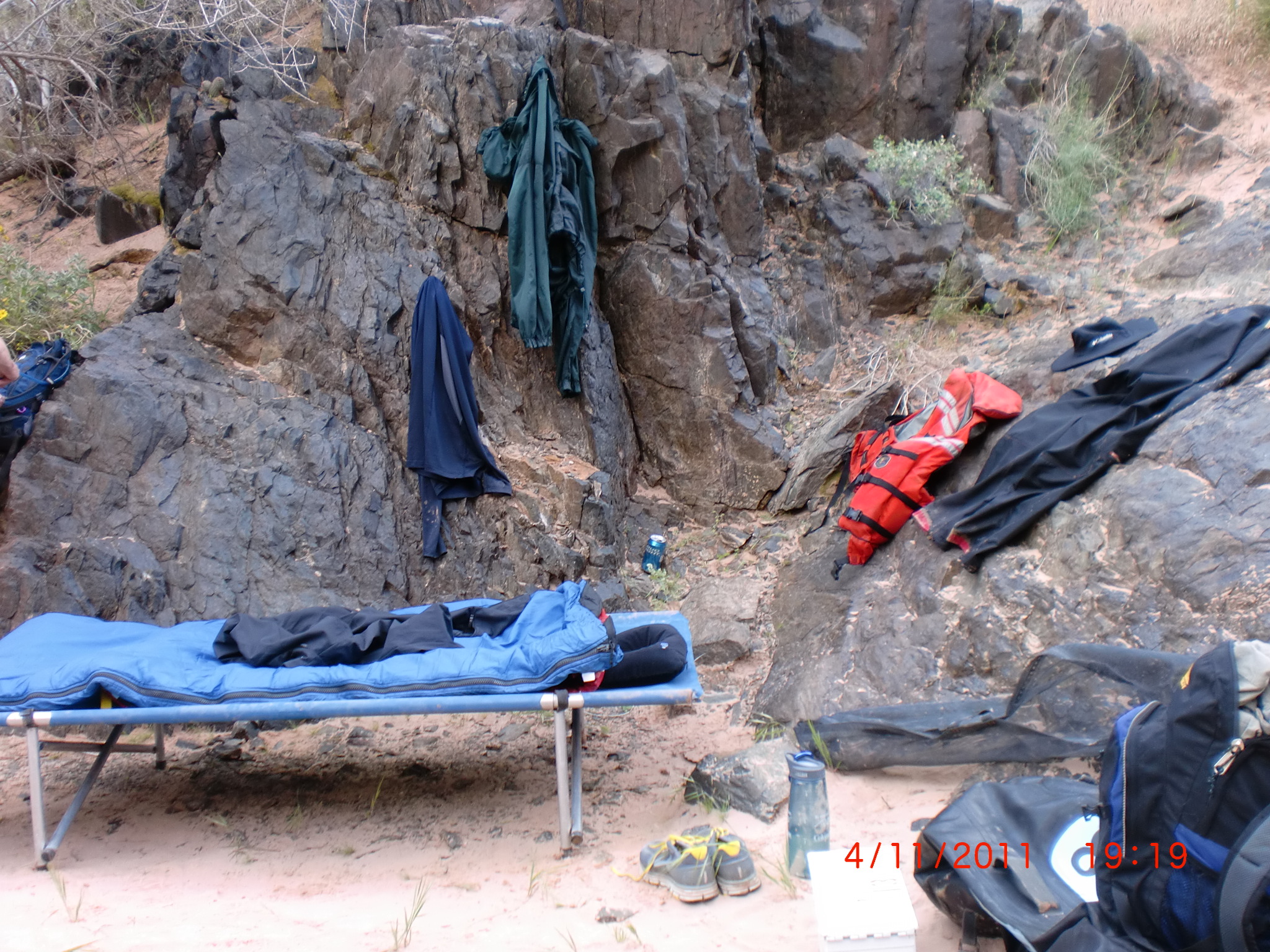