It is hard to describe sleeping and waking up on the banks of the Colorado River inside the Grand Canyon. I awoke a couple of times at night, with a magnificent view of the Big Dipper over the North Rim, something you just don’t see everyday. There were bats swooping down close to my cot, grabbing insects for their morning breakfast (and probably keeping the mosquitoes and flies away).The sun wakes you up, as does Walker’s yell of “Coffee!!” followed a bit later by “Breakfast!!”. The coffee is Cowboy Coffee, brewed in a big pot with the grounds in, poured through a filter. It was tasty, but whoever got the first cup (me twice!) got some extra fiber in their coffee. Breakfast was terrific.

To setup and break camp, we formed a fire line to load and unload our bags. 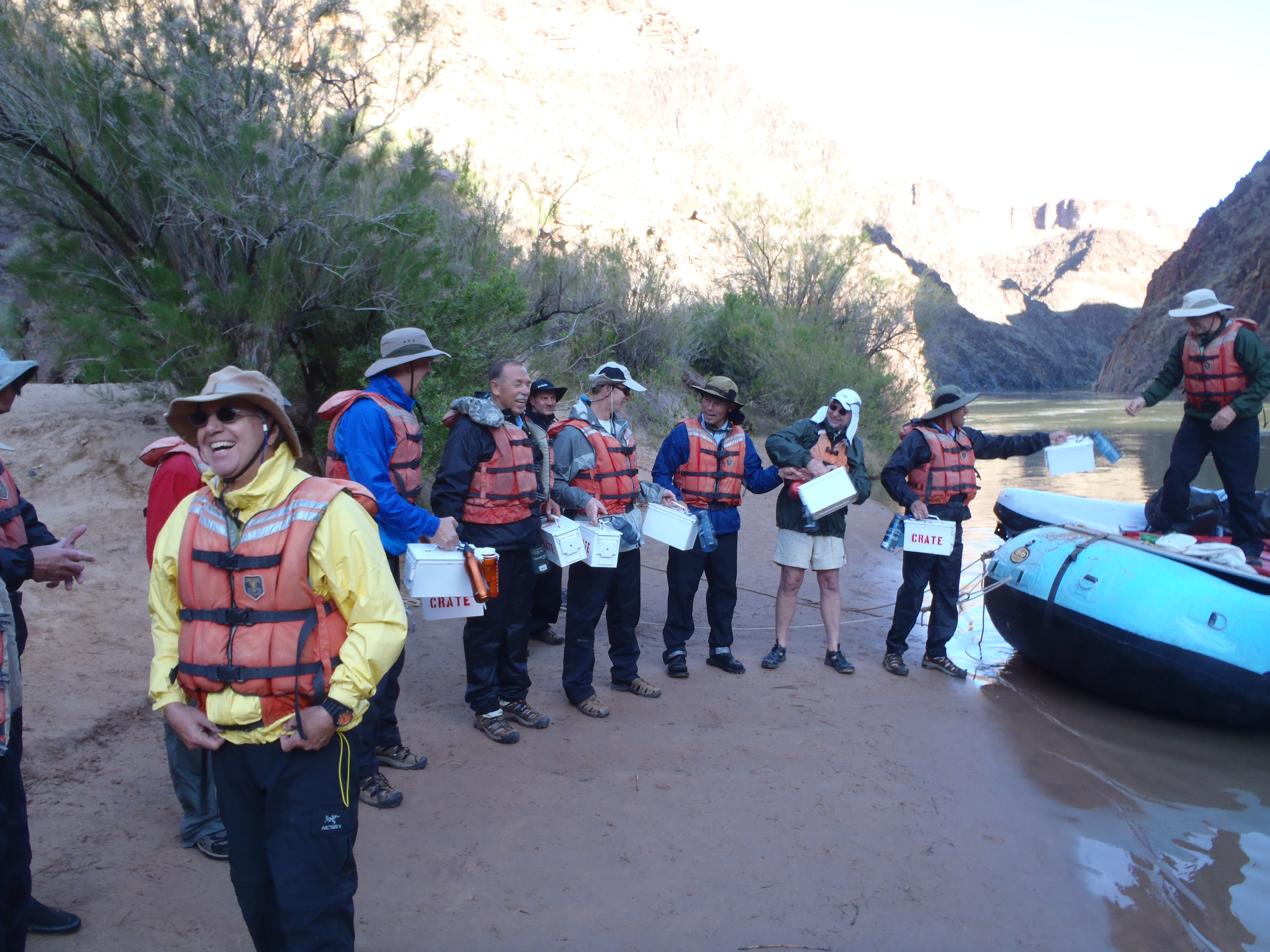 Each camper had two compression bags, one for sleeping supplies (mat, ground cover and sleeping bag) and one for your backpack and clothes. We also each had an ammo can, which was mostly watertight. All three were numbered, mine with lucky number 13.

The rules of the camp are pretty simple:

We added the following unwritten rules: 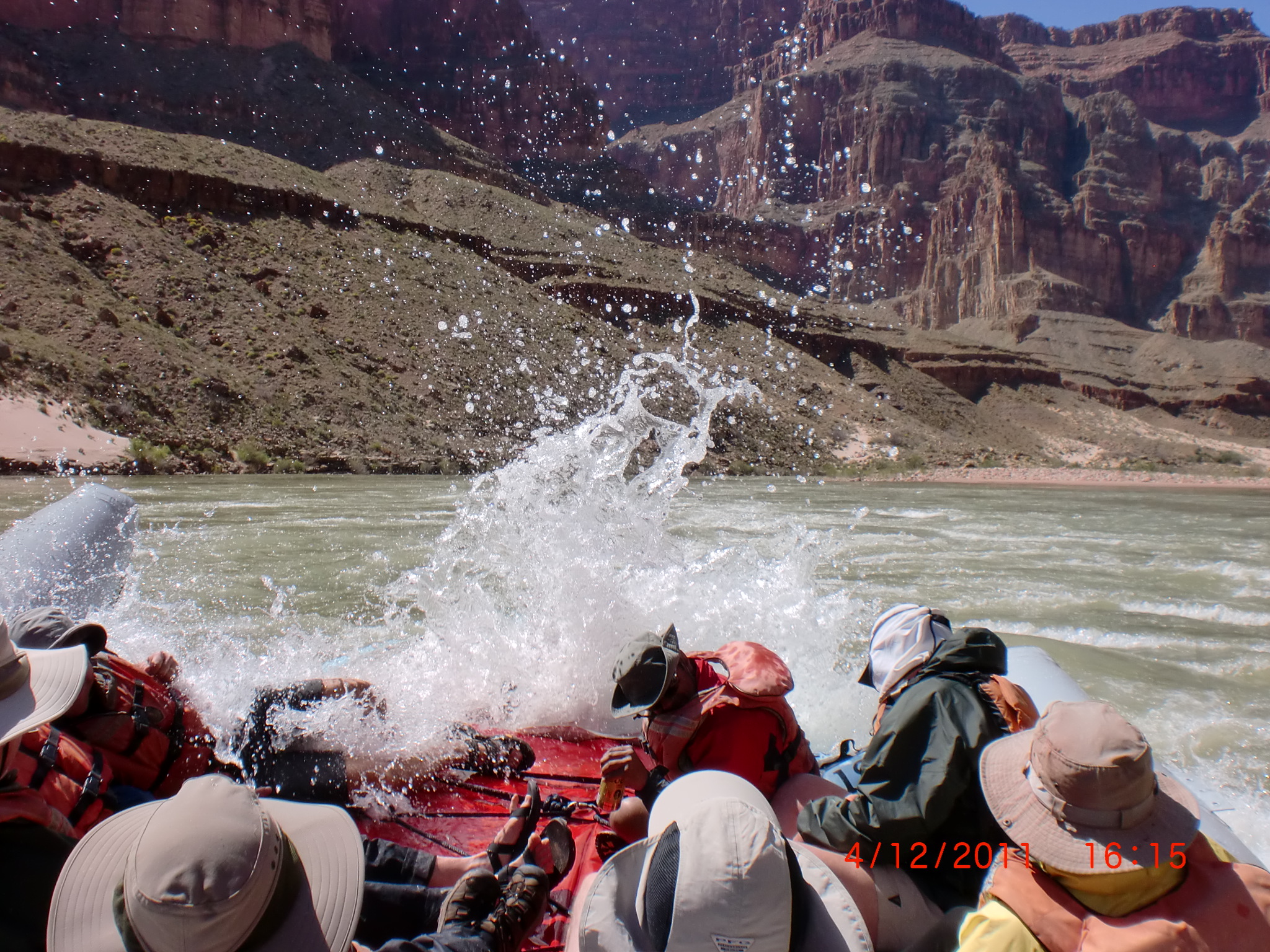 The boat had front seating for eight, and back, higher seating for four. After an initial seat in the front, I sat in the back this time, where the angle for photos was much better (especially with my non waterproof camera).

The river winds through the canyon, and, at every bend, there is some new wonder to see, and to photo. The original explorer of the canyon, John Wesley Powell, described it with these words:

And ever, as we go, there is some new pinnacle or tower, some crag or peak, some distant view of the upper plateau, some strange shaped rock, or some deep, narrow side canyon. Then we come to another broken fall, which appears more difficult than the one we ran this morning. 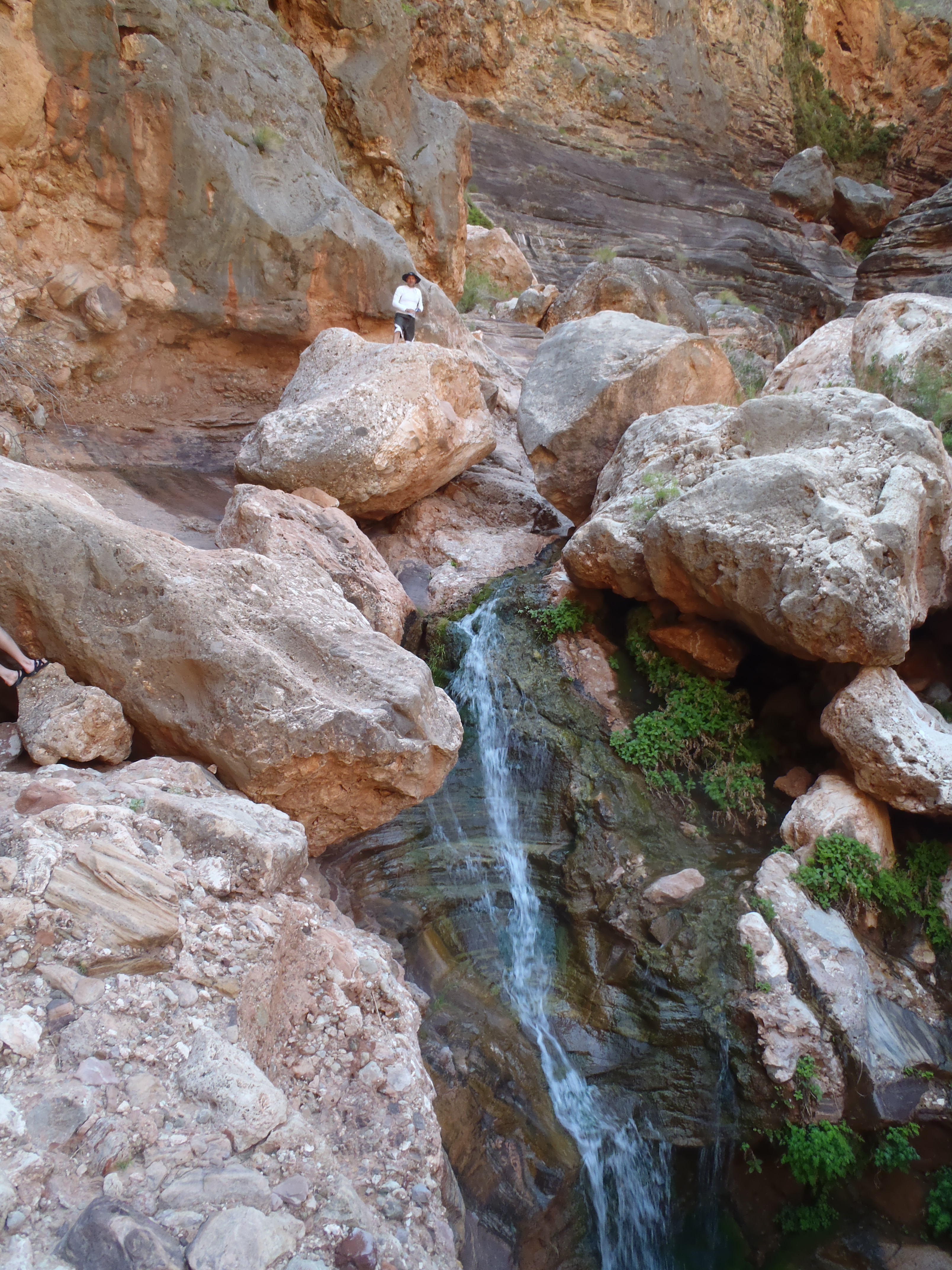 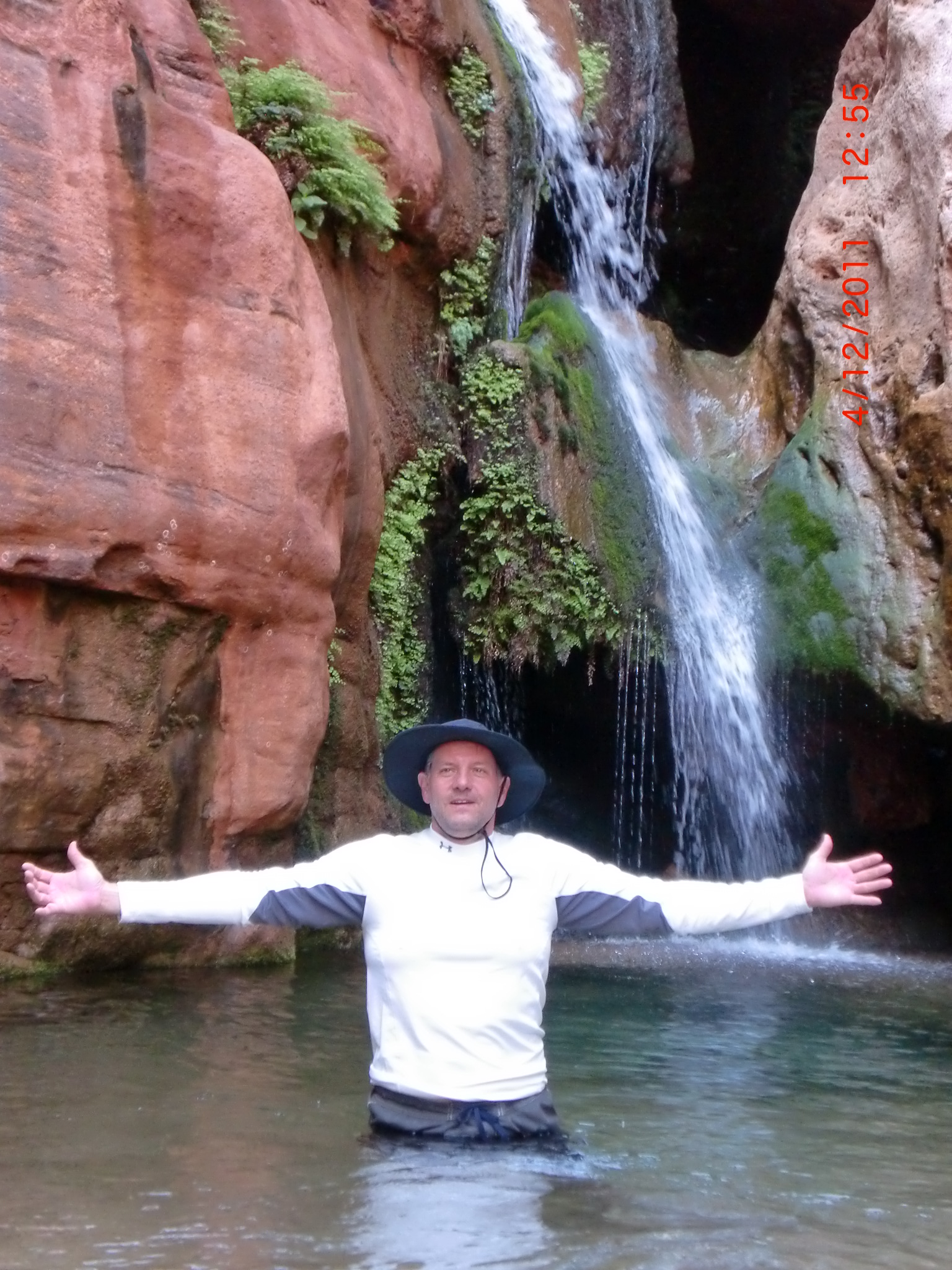 We went about 20 miles down river, and stopped at Elves Chasm (about mile 117). We took a short but rocky hike back to a gorgeous waterfall. Bakul and I got in, but not all the way, as the sun wasn’t shining. Some of the folks were still wet, and didn’t want to risk slipping on the rocks. I made a second trip back to video the falls for Butch, then we had lunch (sandwiches, with jalapeńos!). I took a third hike back with Terry, where we took advantage of the slightly warmer water to wash off some sweat in the falls. 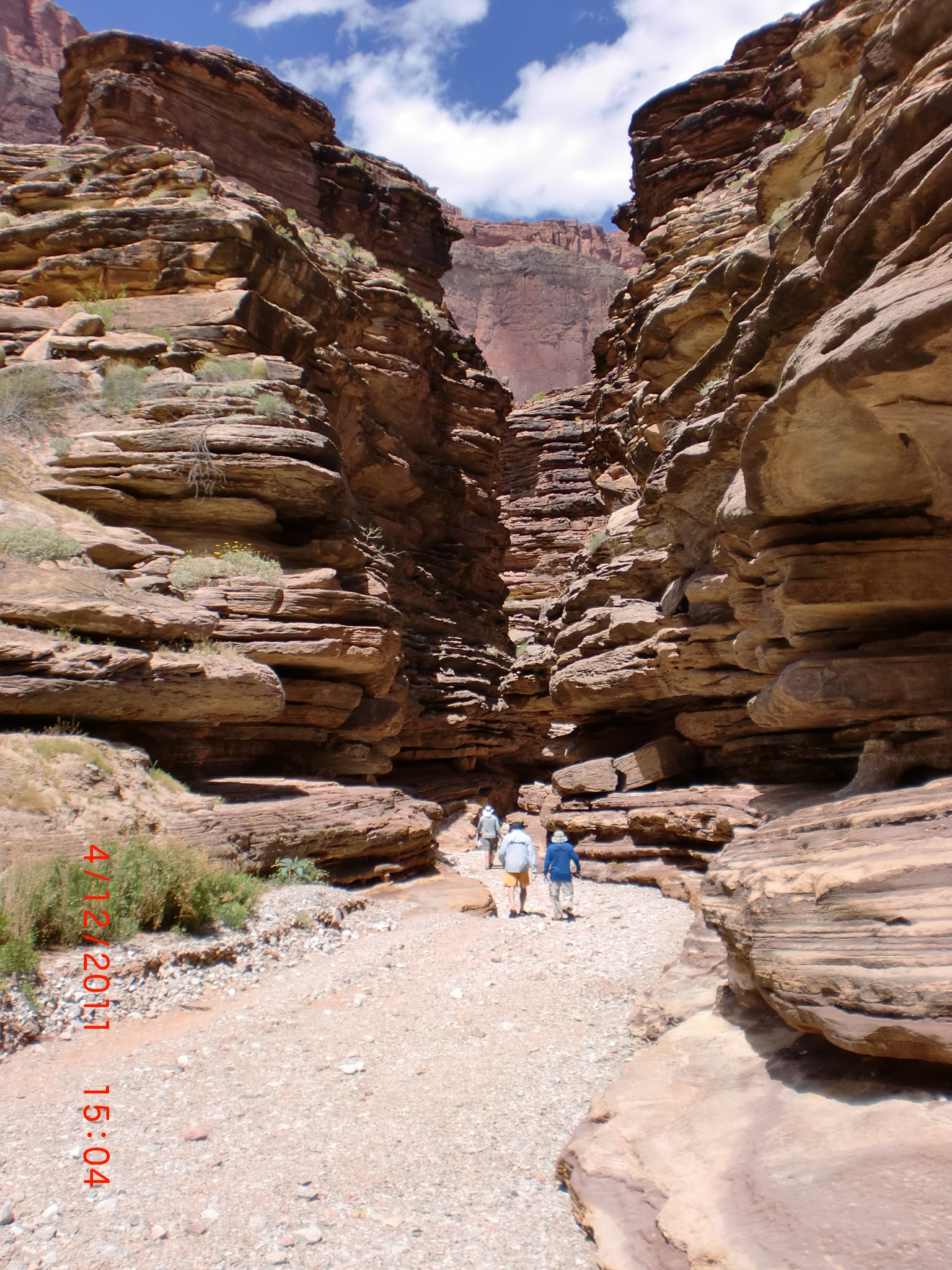 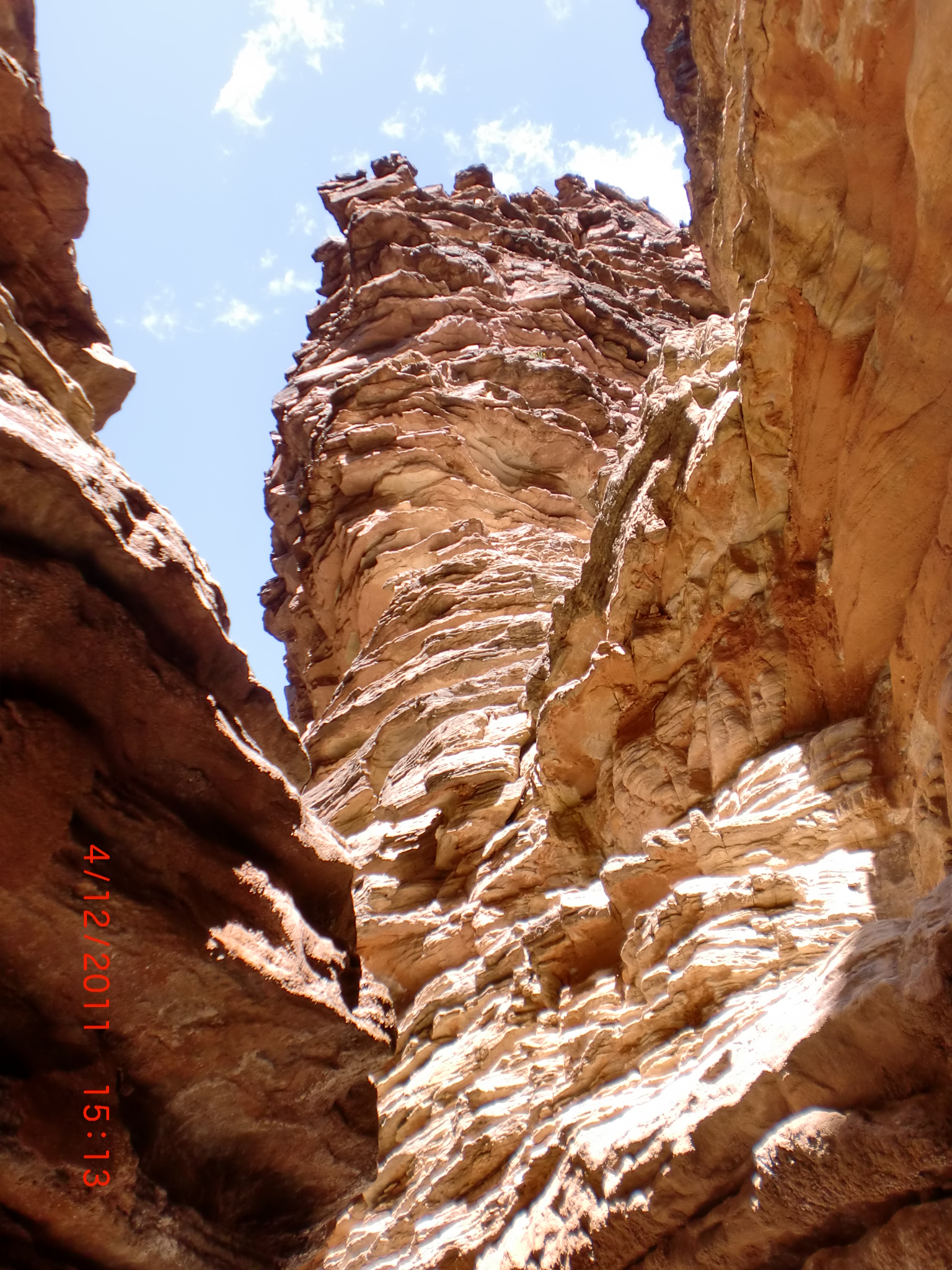 Our next stop was at Blacktail Canyon (about mile 120), where Walker pointed out the geological anomaly known as “the Great Unconformity” where the layers of rocks seem to skip millions of years. 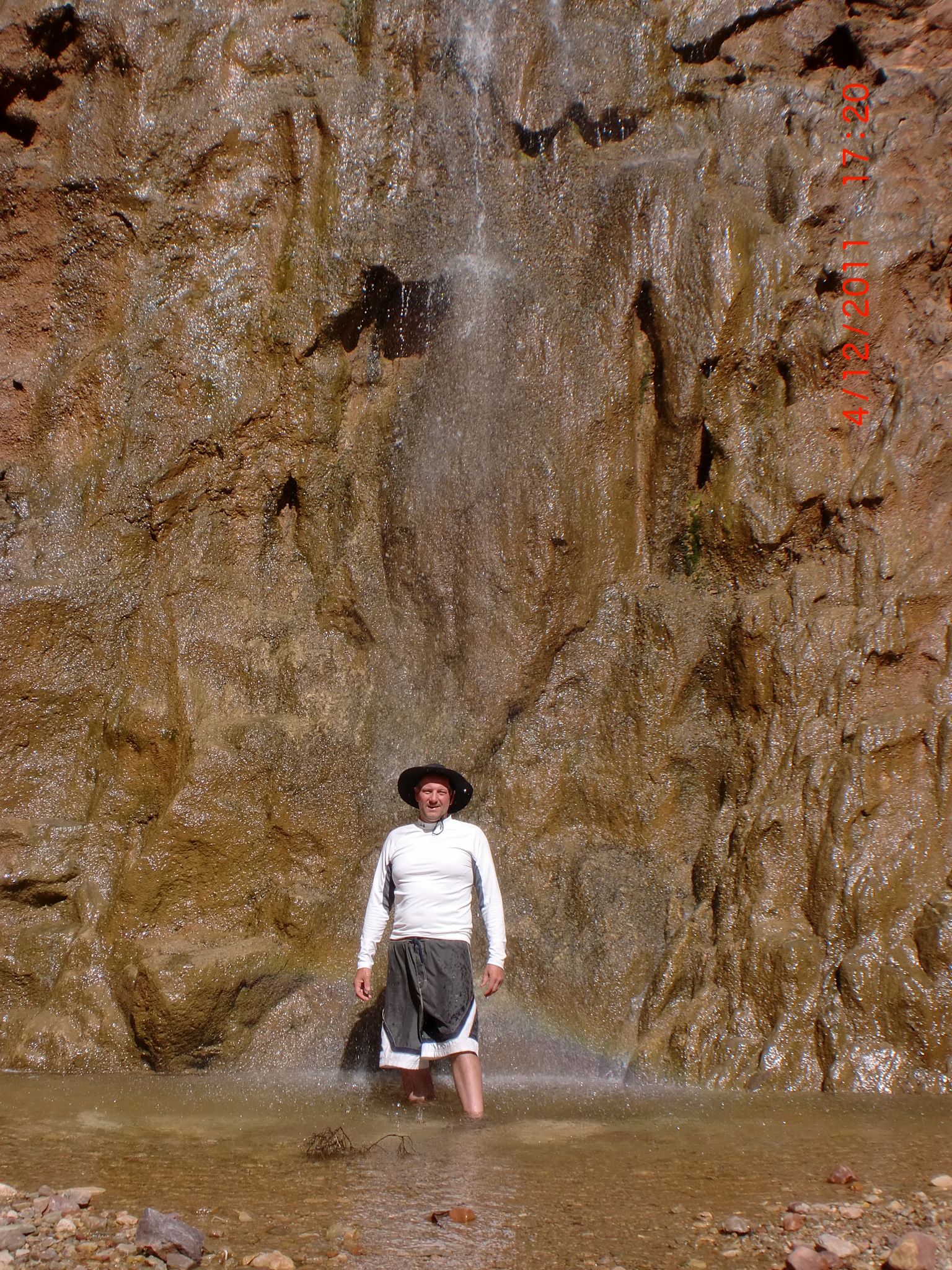 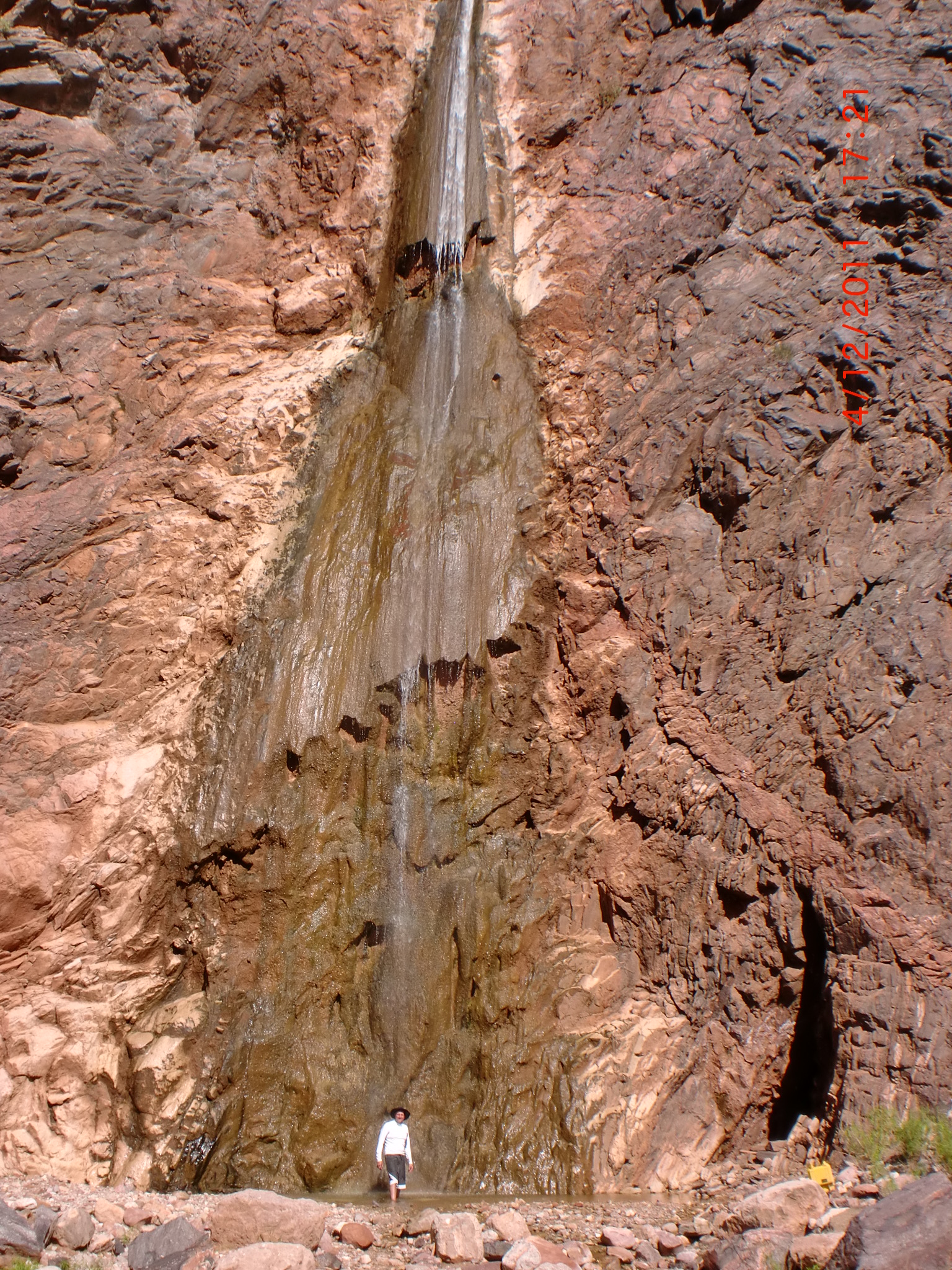 Our third stop was at 130 mile creek, where the waterfall is only wet in the springtime. The climb up there was difficult, but Dewey, Walker and I made it with our cameras, and were rewarded with an excellent waterfall complete with rainbow. My brother helped us climb back out, making sure he didn’t have to tell our mother that my curious nature had gotten me hurt! But I had to see this…a waterfall that only is in existence in the springtime, and is a hard climb to get to = a once in a lifetime experience.

We camped at a site called Below Bedrock, where we had excellent BBQ Chicken, and a martini, of course. This beat my expectations of vienna sausages and pork n’ beans by a wide margin, more kudos to Dewey and Walker of CRATE (Colorado River and Trail Expeditions). This was mile 131, 35 miles today and 43 total. 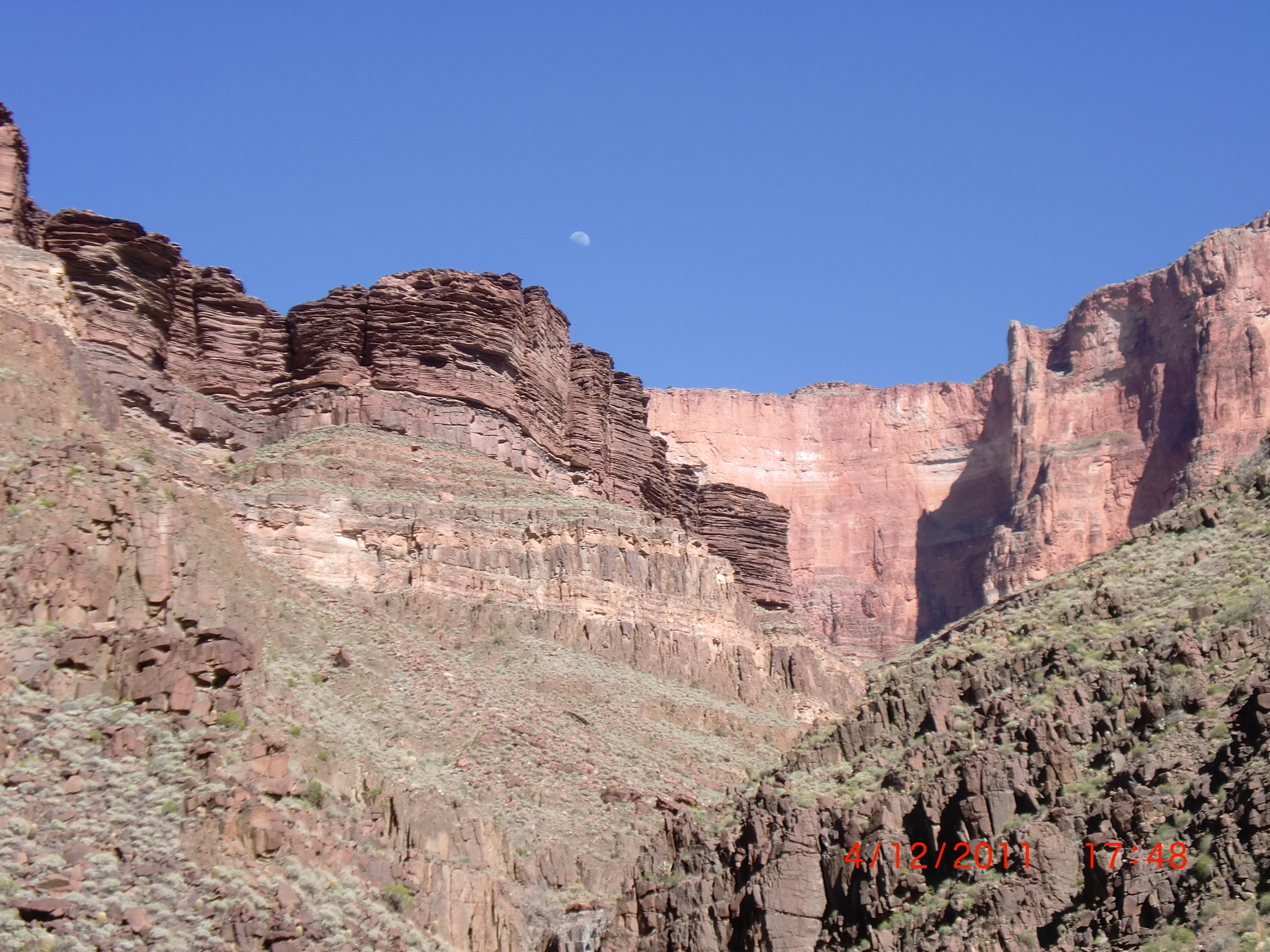