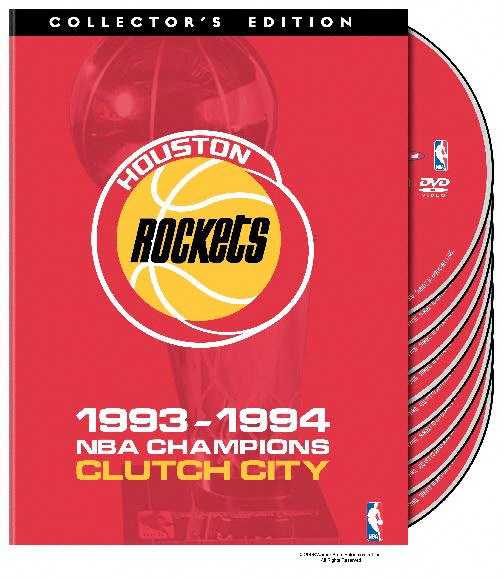 Disclaimer right up front: I am biased.

I had Rockets season tickets for the great Hakeem Olajuwon’s entire career, and saw every game of the two championship playoff runs. And I agree the old adage “you can’t go back.” Whether one is discussing being a participant (be it fan or player) of a great team’s run, or working for a great company like a Compaq, that particular environment, the excitement and enthusiasm is hard to recreate. You expect things to be the same, but they rarely are.

And that brings us to this year’s Rockets.

The Rockets of 2004, of course, earned the name “CHOKE CITY” for losing those first two games in that fashion, and then came back and won the series in seven games, prompting the T-shirt empire that was “CLUTCH CITY.”

And then those Rockets: Hall of Famer Olajuwon, and a cast that included TNT Commentator Kenny “the Jet” Smith, Vernon “MadMax” Maxwell, the underrated Otis Thorpe, Mario Elie, Sam Cassel, Robert Horry (who has more championship rings that most Hall of Famers) and a cast of others…won the NBA Championship over the New York Knicks.

Then they did it again the next season, with the addition of hometown hero Clyde “the Glide” Drexler.

And they were done.

They brought in the “Round Mound of Rebound” Charles Barkley, who was more round than rebound. That didn’t work out.

They brought in Scottie Pippen, late in his career, and without Michael Jordan. That didn’t work out.

Tracy McGrady came in, Yao Ming came in. A small bit of playoffs, but that didn’t work out.

And thus we come to the current incarnation, good players with good nicknames: James “the Beard” Harden; Dwight “DHo/Superman” Howard, Chandler “J.T.” Parsons, and a good cast of Patrick Beverly, Jeremy Lin, Terence Jones and others.

Like their illustrious predecessors, this years Rockets get home court in the playoffs, and lose the first two.

Can they make lightning strike twice? Can they turn Choke City II into Clutch City II?

Sadly, I think not. Even worse, I find that I cannot care about this team.

There are several reasons.

One, hack-a-Howard. If anything makes a game not worth watching, it is this strategy. Sure, the guy being hacked (whether Shaq or Howard or Omer Asik) should make the free throw and thwart the strategy. But what a waste of watches and paid attendees time.

Two, if it is true, this sequence from Harden:

A few minutes later, the questions stopped coming, but not before Harden, evidently still aggravated, circled back and spun the questioning to the aforementioned reporter, taking issue with his basketball credibility.

“You’ve never seen someone shoot 29 percent in two games? You must not watch basketball.”

The longtime reporter responded that he’d watching basketball longer than Harden had been alive. And that Harden should be held to a higher standard because he is All-NBA.

“Weirdo,” Harden said, before walking out of the room once Houston’s PR staff stepped in.

Despite his defiance, Harden has never been this bad. He has missed 33 shots in his past two games, the most he has ever missed in a two-game span in his career. In the 2012 Finals, Harden infamously shot 18-for-48 (37.5 percent) in five games, but he wasn’t the focal point of the offense like he is in Houston.

In Game 2 on Wednesday, Harden missed 13 shots, which is more than he attempted in any of those five Finals games.

Third, DHo. My son and I like him, really want him to be successful. But, unlike Olajuwon, who’s motor and competitive fire seemed to always be running (sometimes to his detriment) and who is working with Dwight, Howard seems to need a push. And, when he plays like Shaq wants him to play, the running Rockets are out of sorts.

And, lastly, and most telling, I find myself switching over to watch hockey (which I call Rugby on Ice). I find it more enjoyable these days than the NBA. I don’t get as much enjoyment from a Rockets win as I do from the San Jose Sharks winning. I get more enjoyment from an Anaheim loss than I do a Spurs loss. The players seem to try harder, push themselves more, and aren’t such prima donnas.

Can this year’s version of the Rockets come back?

I wish them well, but most likely won’t be watching.