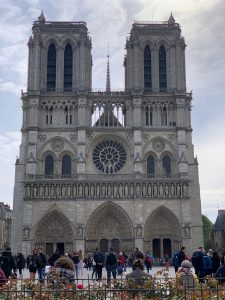 We didn’t intend to visit Notre-Dame during our 30th anniversary tour trip. We’d been there many times before, and had planned to take the train to Reims that morning (Saturday, April 6, 2019) to see that cathedral. But jet lag, over-sleeping (due to anniversary celebration with friends Steve and Allyson the night before – I blame Steve for that last bottle of champagne!) plus street closures due to concerns about possible yellow vest (gilets jaunes) protests had us missing the train departure. On a whim, I asked the taxi driver to divert from the train station and drop us at Notre-Dame. That’s how we visited Notre-Dame before the fire.

We visited the inside of the cathedral and, for the third or fourth time, grabbed a spot in line to climb the towers and say hello to the gargoyles.

We heard the news of the fire a week later while still traveling. It caught us off guard and shocked us as it shocked the world.

We’ve heard estimates that the Cathedral may not be open to visitors again for many years. By chance or karma, our last-minute change in plans allowed us to visit the Cathedral once more. These photos of Notre-Dame before the fire from the top, back and side are no replacement for seeing the cathedral in person, but hopefully they will tide some readers over until the re-opening.

Inside Notre-Dame Before the Fire

The main line to get into the cathedral was minimal and moving fast. It was a Saturday and there were services being held inside the cathedral. The middle aisle was roped off, but the view through the columns towards the stained glass at the end was spectacular as always. 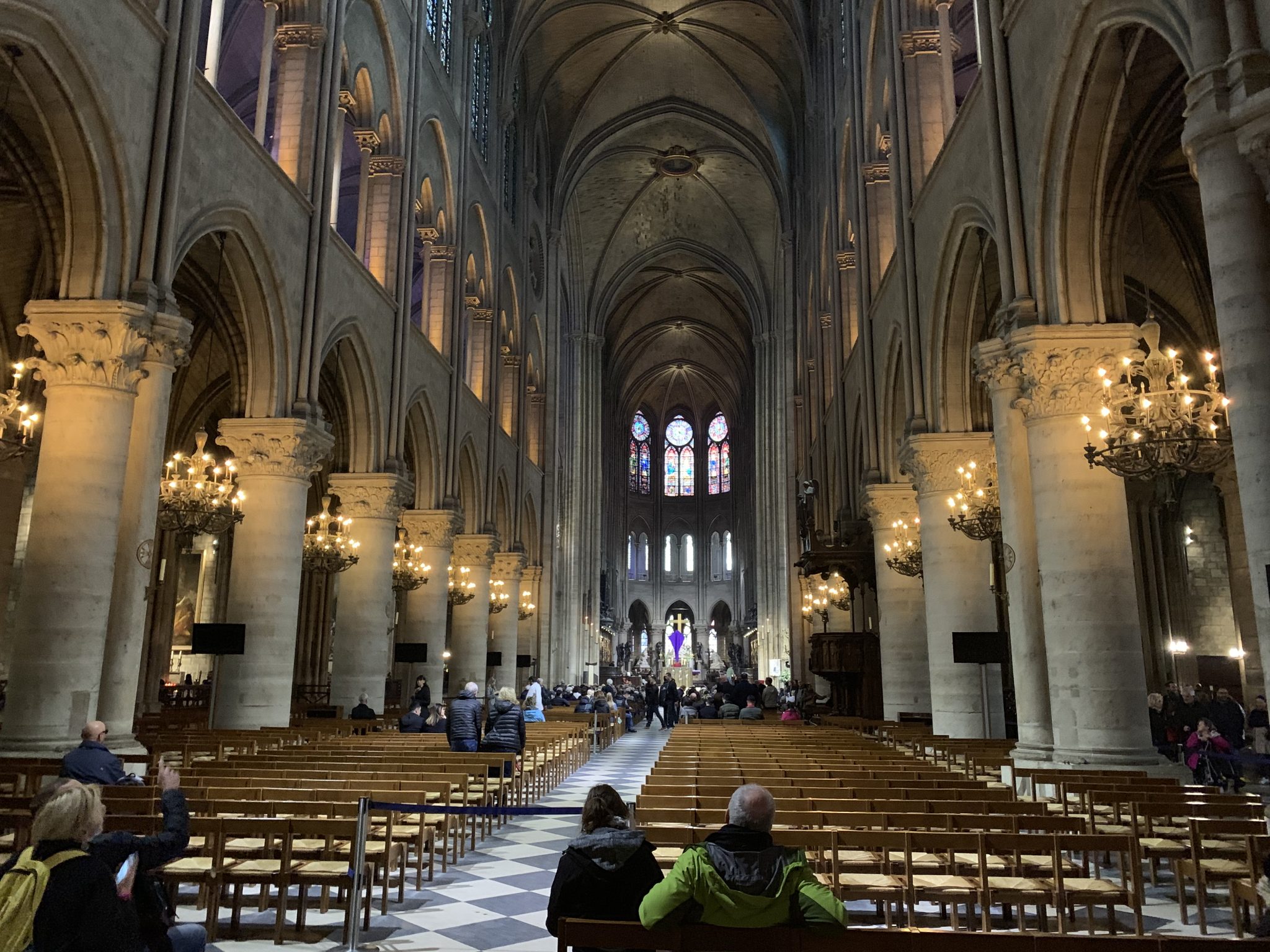 We walked up the left side, and stood looking across towards the south rose window and the sixteen panels of stained glass beneath it. 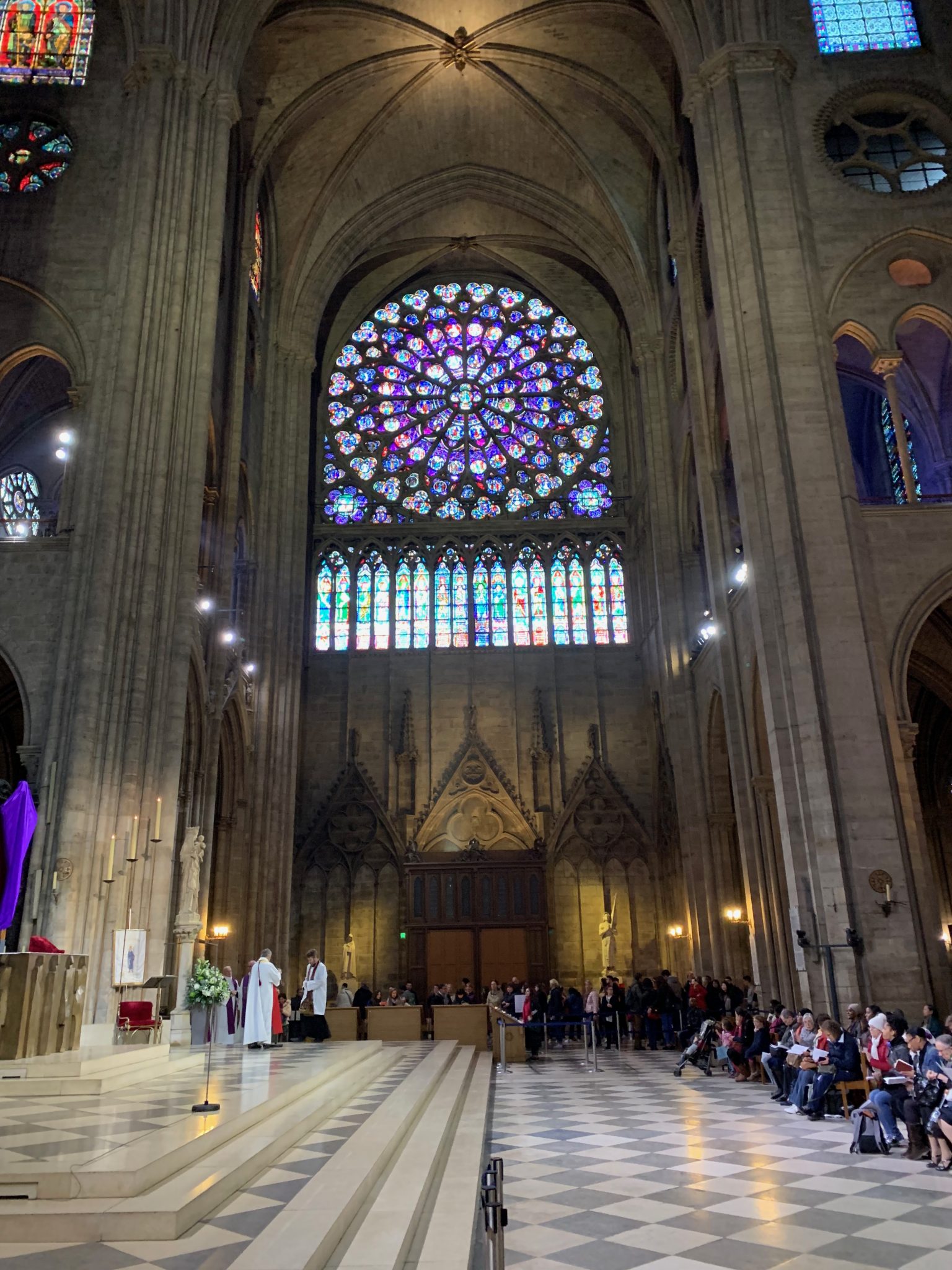 We walked around, behind the altar, and came out to look back across toward the north rose window. According to some reports, all three of the rose windows appear to have been saved from the fire. 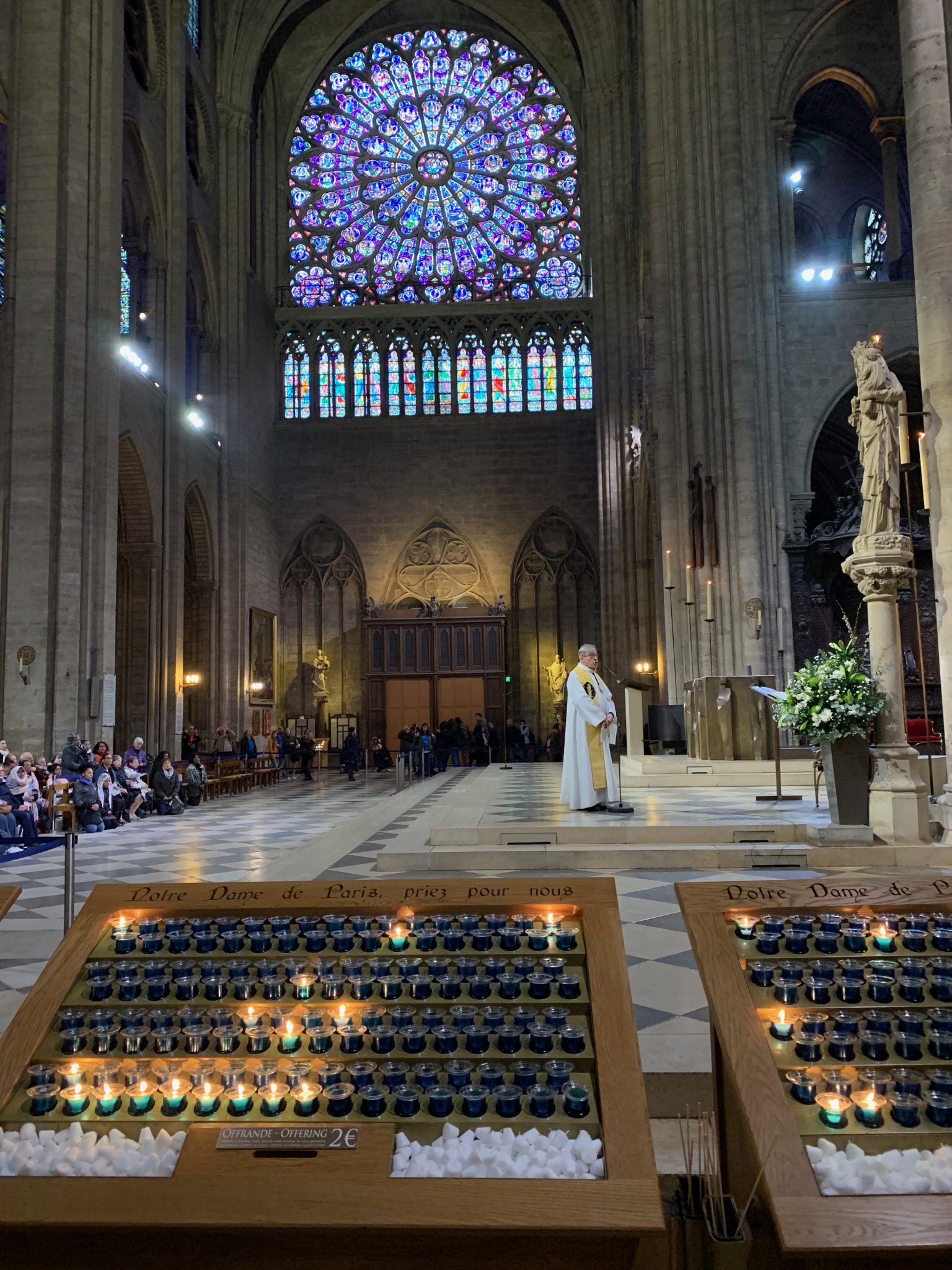 There are alcoves all along the sides and rear of the cathedral, many with stained glass windows. 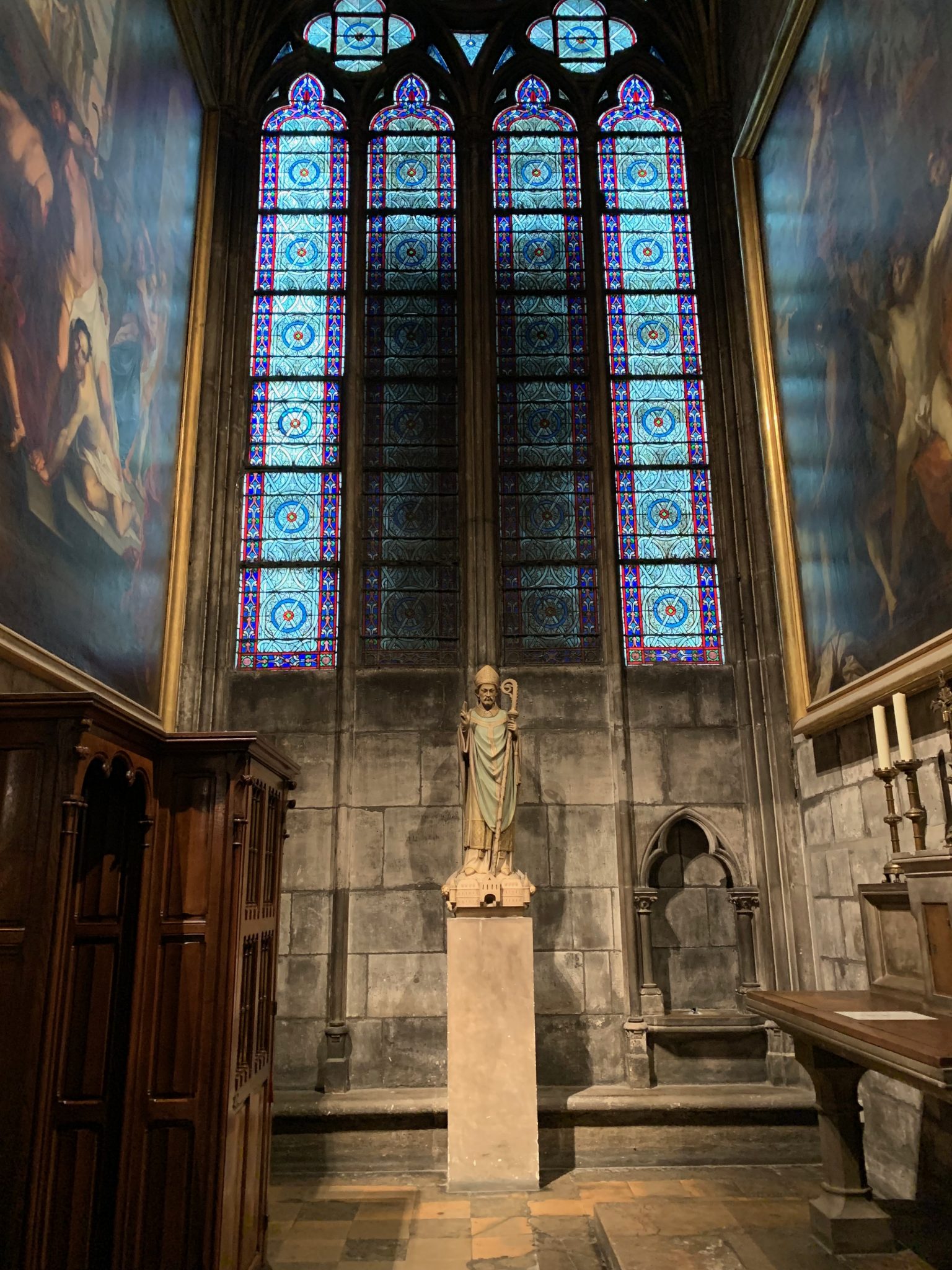 All of the alcoves have statues, sculptures or art work. These are only a small representation of those. 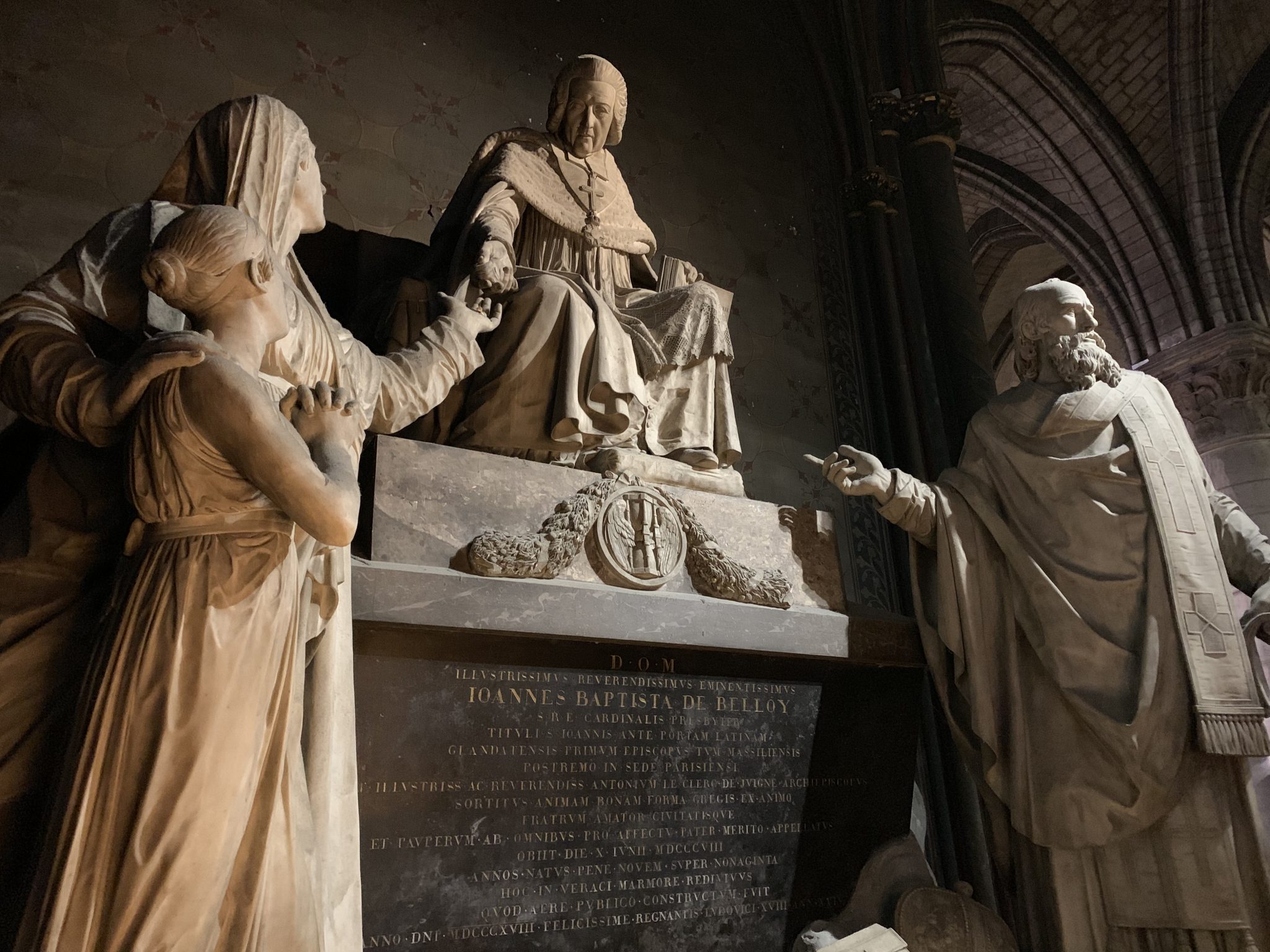 After we exited the cathedral, we went around the corner to register for a spot to climb the towers. The next spot was a couple of hours later. We walked a block to go through the gorgeous Saint Chapelle, had lunch and then returned.

As mentioned, we’ve climbed the towers several times before. The view of Paris from those heights, plus the up-close looks at the gargoyles designed by Eugène Viollete-le-Duc, the spire and the roof are worth it every time.

The entrance to climb the towers in on the North Tower side, on the Rue du Cloitre-Notre-Dame. When our reserved time came, we climbed a few steps up the circular stairwell to a room which is on the same level as the organ gallery. There is a small gift shop and the tower ticket office here. After a brief wait, we climbed the same stairwell up to the main level, which is 46 meters / 151 feet above the ground.

In the picture below is the spire that burned and fell. Where the scaffolding meets the spire several greenish statues can be made out. 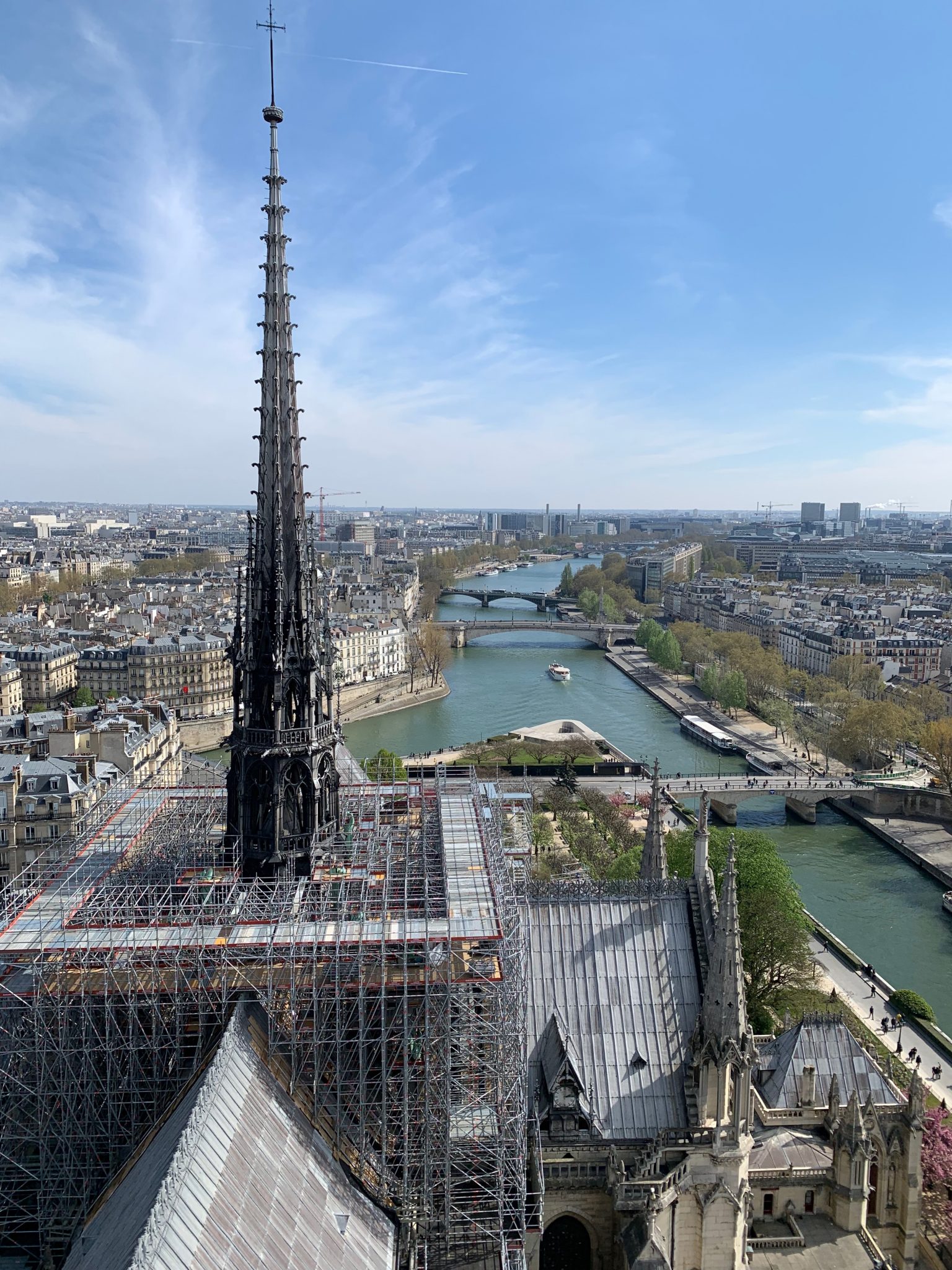 In this photo from our visit in March 2003, the current renovation was not in progress (though there was scaffolding on the North Tower). Here the statues that were removed just before the fire can be seen clearly. 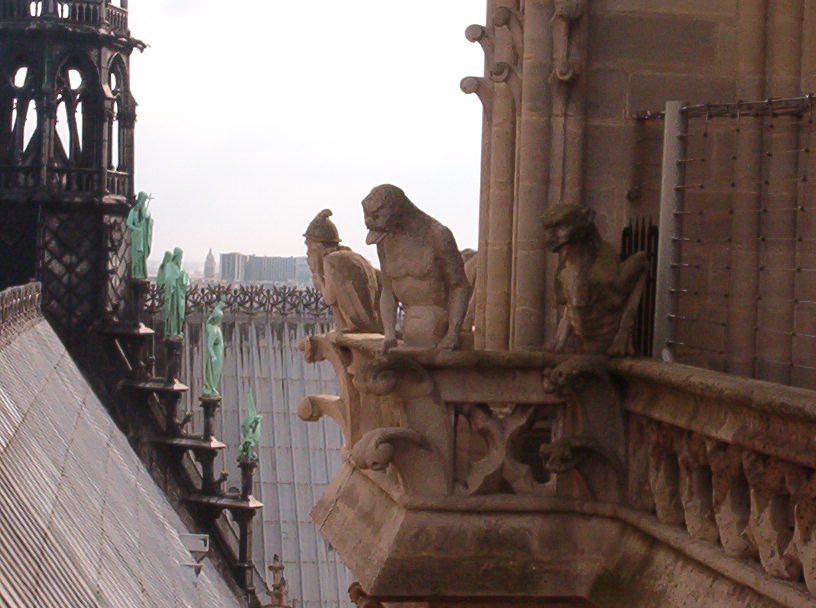 Here there be gargoyles and chimeras. According to some sources there are 56 chimera here on the Galerie des Chimères, the balcony between the north and south bell towers. I have heard no information concerning damage to the gargoyles that guard the towers (and act as drains and downspouts). I hope that they still look out over the Parvis (plaza). 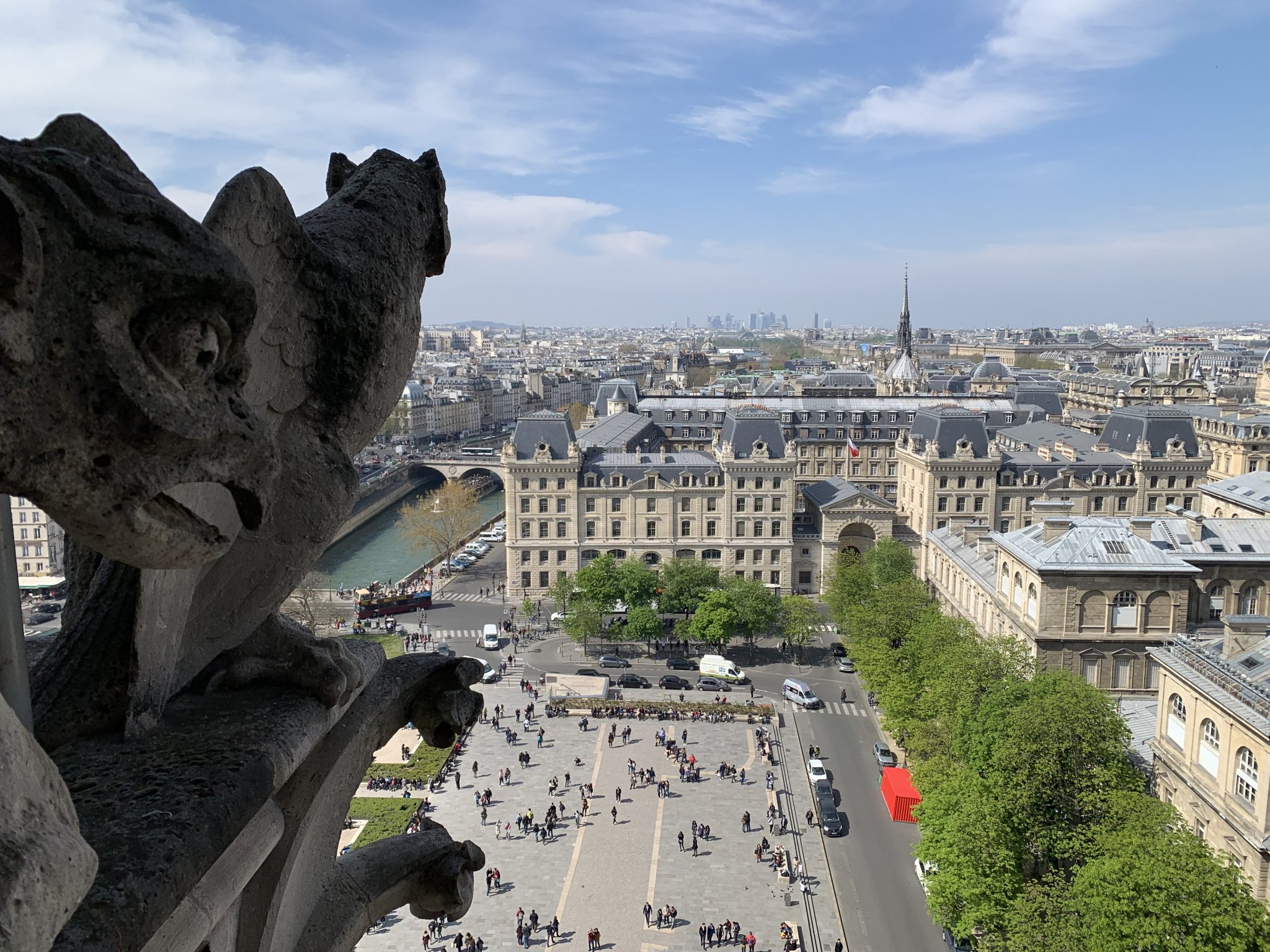 Maybe the gargoyles and chimeras have a lottery to see which of them get to look towards the Eiffel Tower. The one on the right in the photo below is nicknamed Wyvern, one of two gargoyles that have earned nicknames (the other being the oft-photographed Stryga, the Spitting Gargoyle). 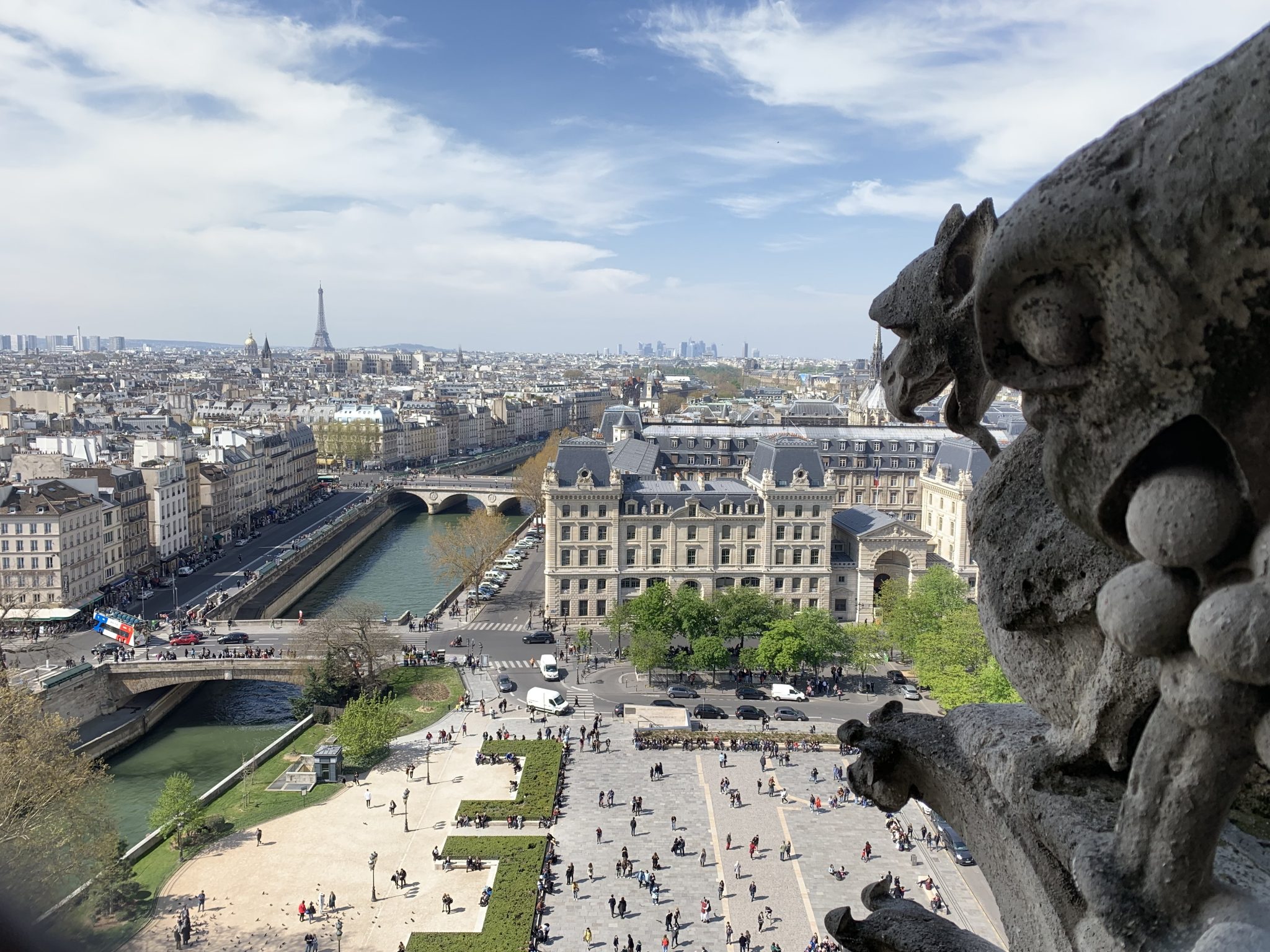 Not all of the gargoyles are lucky enough to face the outside. 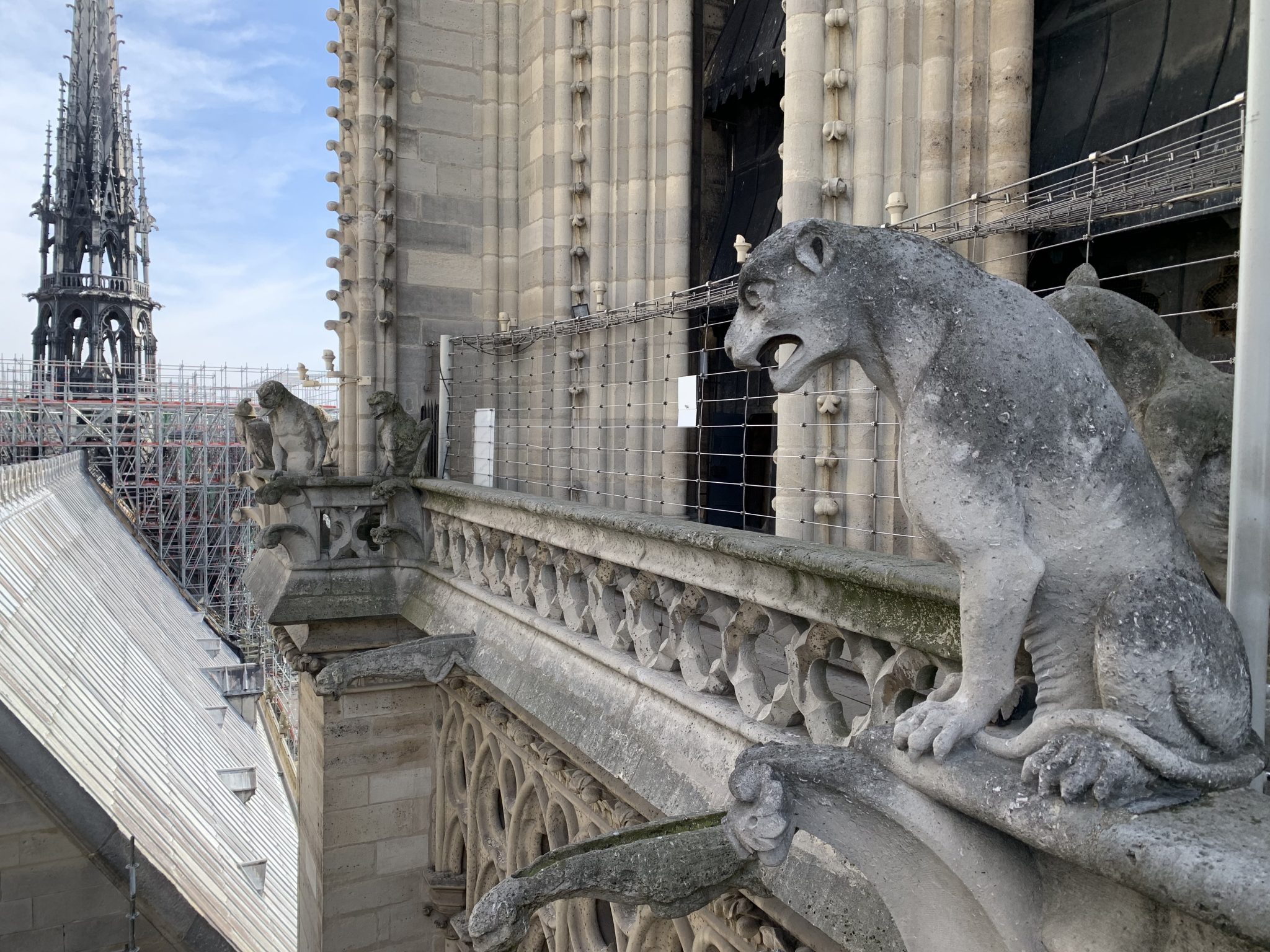 Every visit to the towers, I check to see if the gargoyle in the photo below has finished his meal. As you can see, he is still gnawing away. Since he is facing the inside, apparently he has no guard duty. 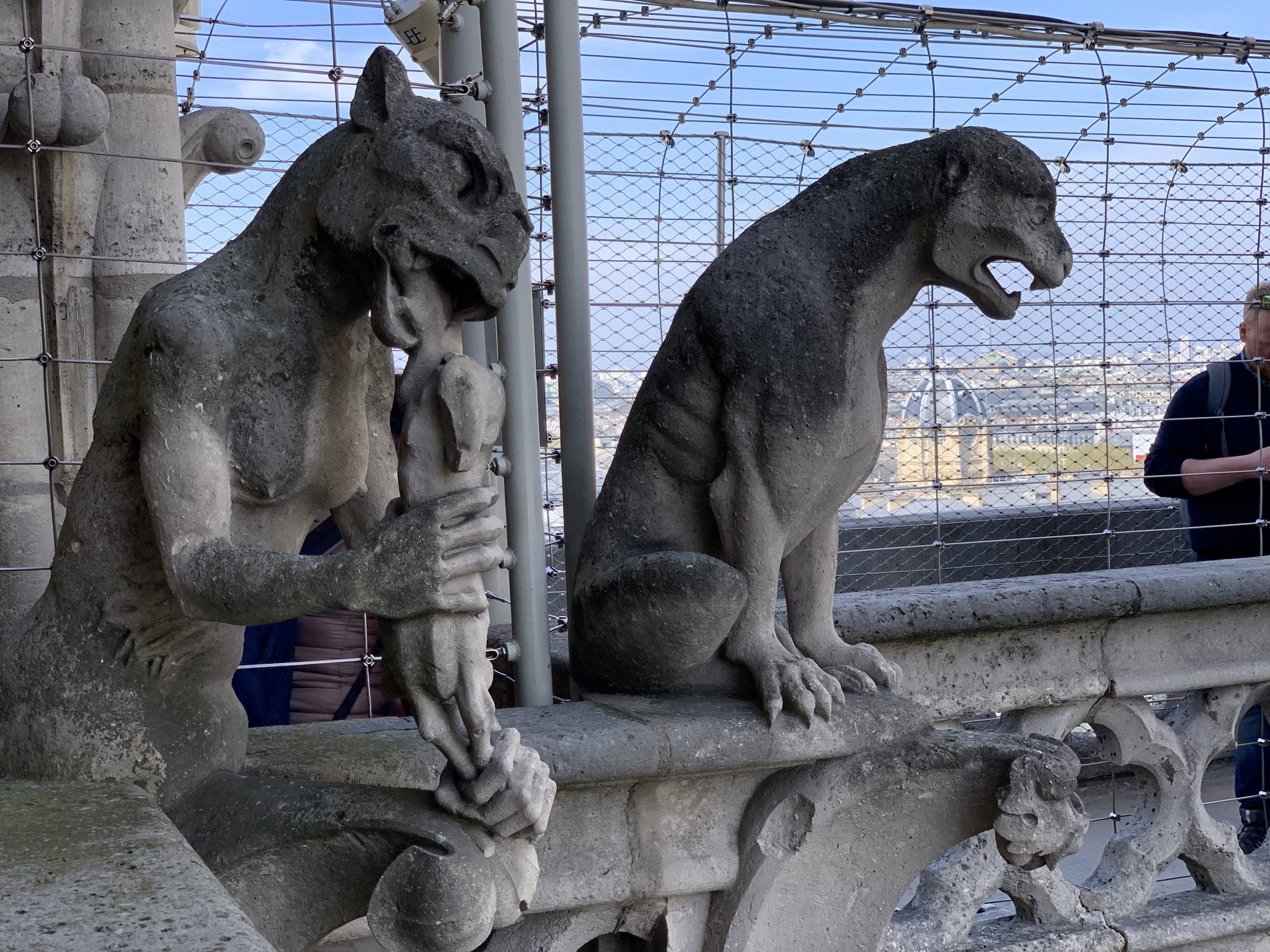 I never noticed, or perhaps did not remember, that there is an elephant gargoyle or chimera. Hopefully it trumpeted when the fire was over. 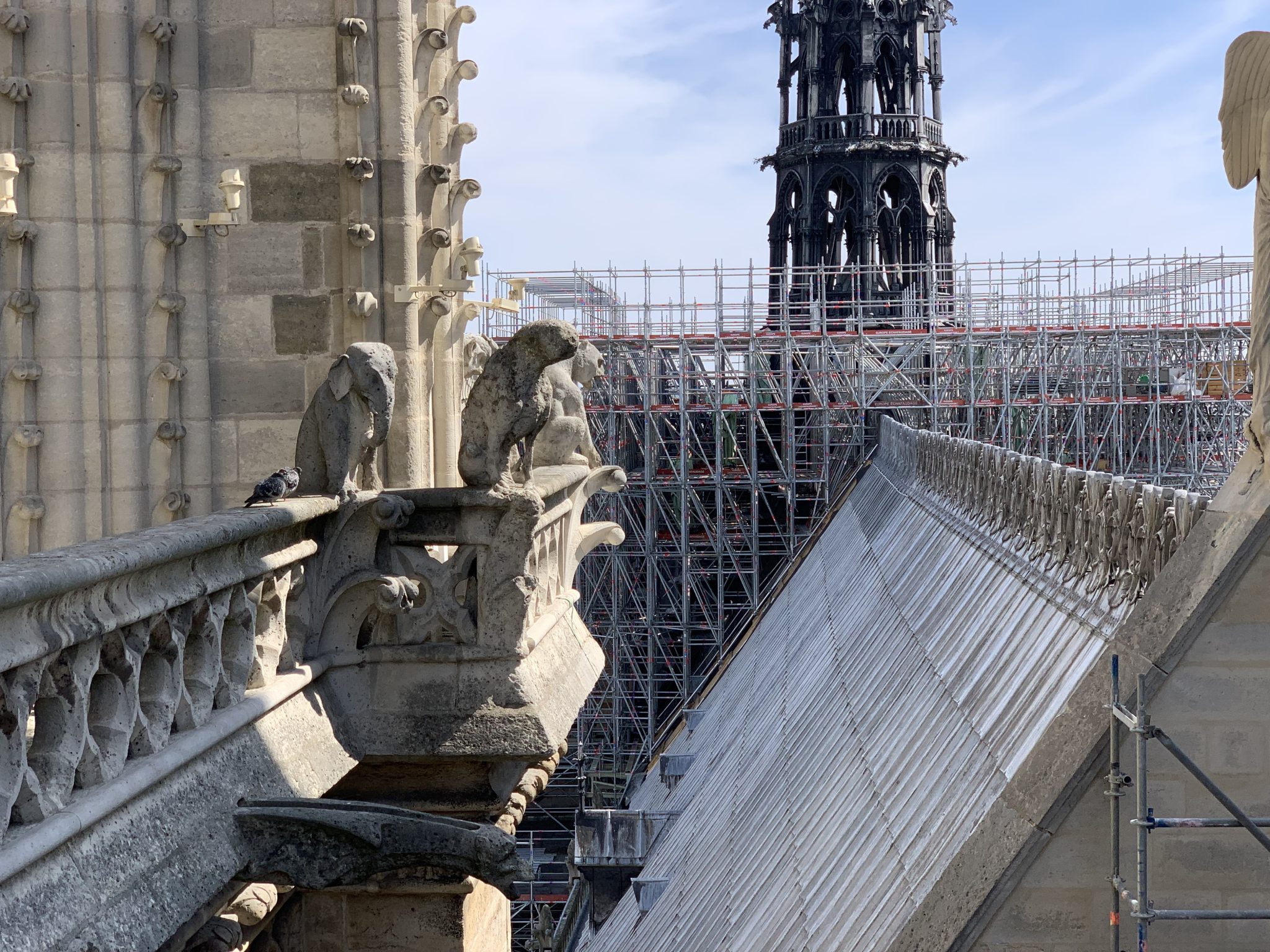 If you turn up the audio on the short video below, the bell can be heard ringing in the north tower while we were on the south tower side.

The belfry (bell tower) in the South Tower was open for visiting. There were lots of sketches of the Hunchback of Notre Dame, as well as two bells: “Emmanuel” (which the guide said was from the 17th century and weighed 13 tons) and “Marie” (which was installed in 2013 and weighs 6.2 tons). The beams on the floor and sides of the belfry were wooden, much like those that supported the roof which collapsed in the fire. If these beams would have caught fire like those in the roof did the falling of these heavy bells could have caused a lot of damage. The firefighters were indeed quick and timely. 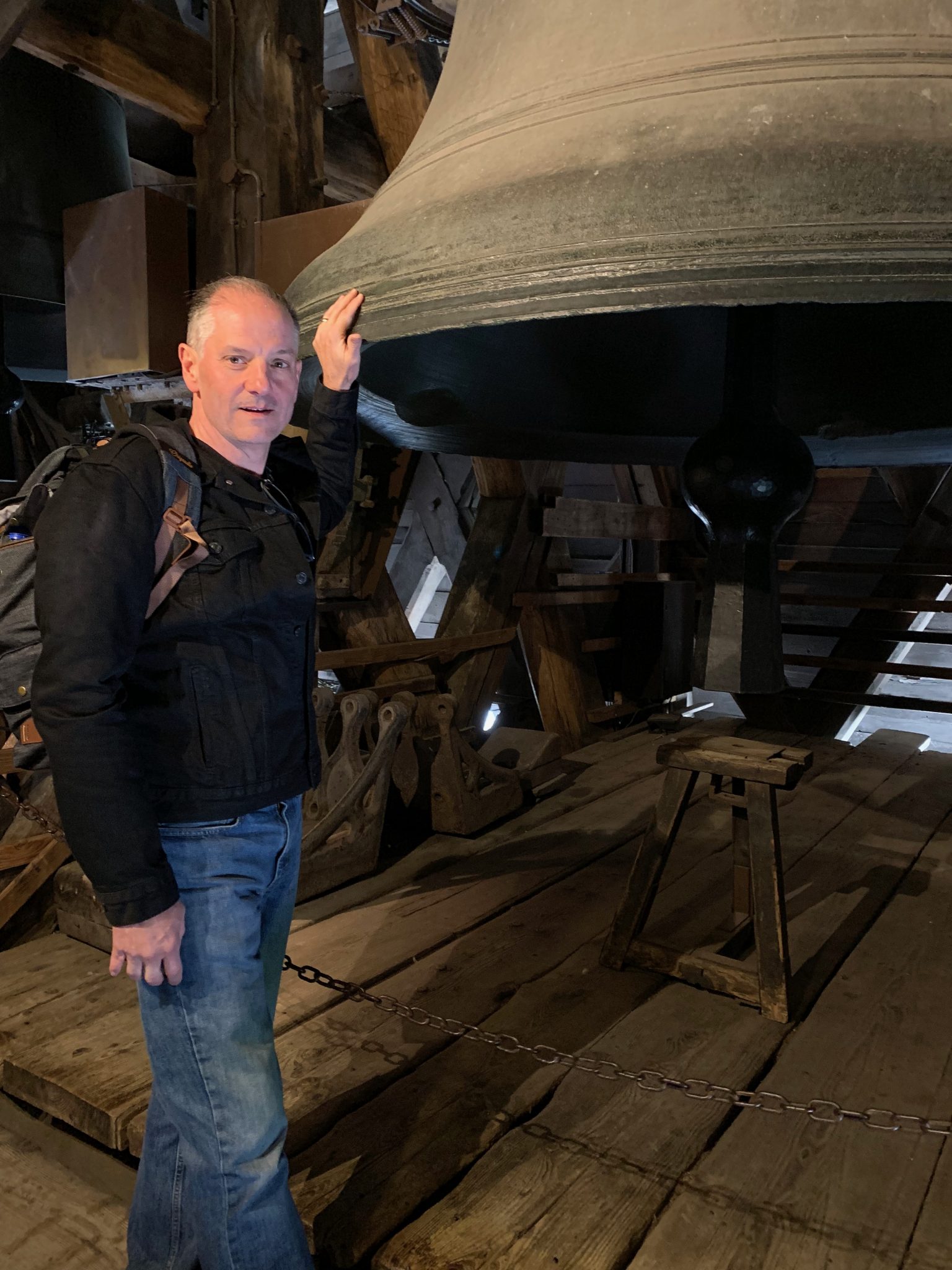 There is a short wait to get to the top of the South Tower; there is only one way up and down so all of the people in the group ahead must climb down before the next group is allowed up. Once that group is down the staircase, it’s a few more steps up to the top, and then a one way fenced walkway that runs clockwise around the top of the South Tower. 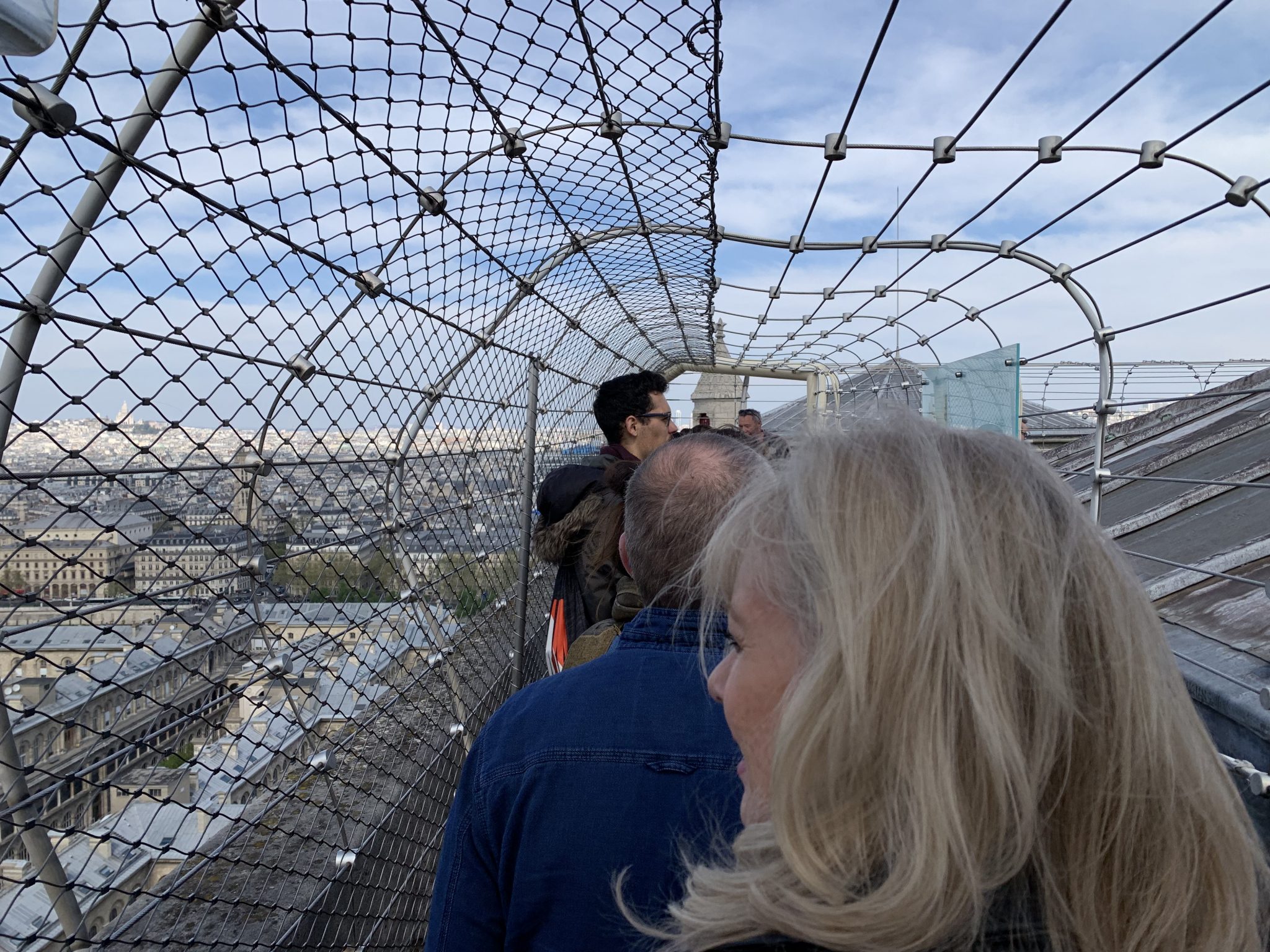 There are great views in all directions. 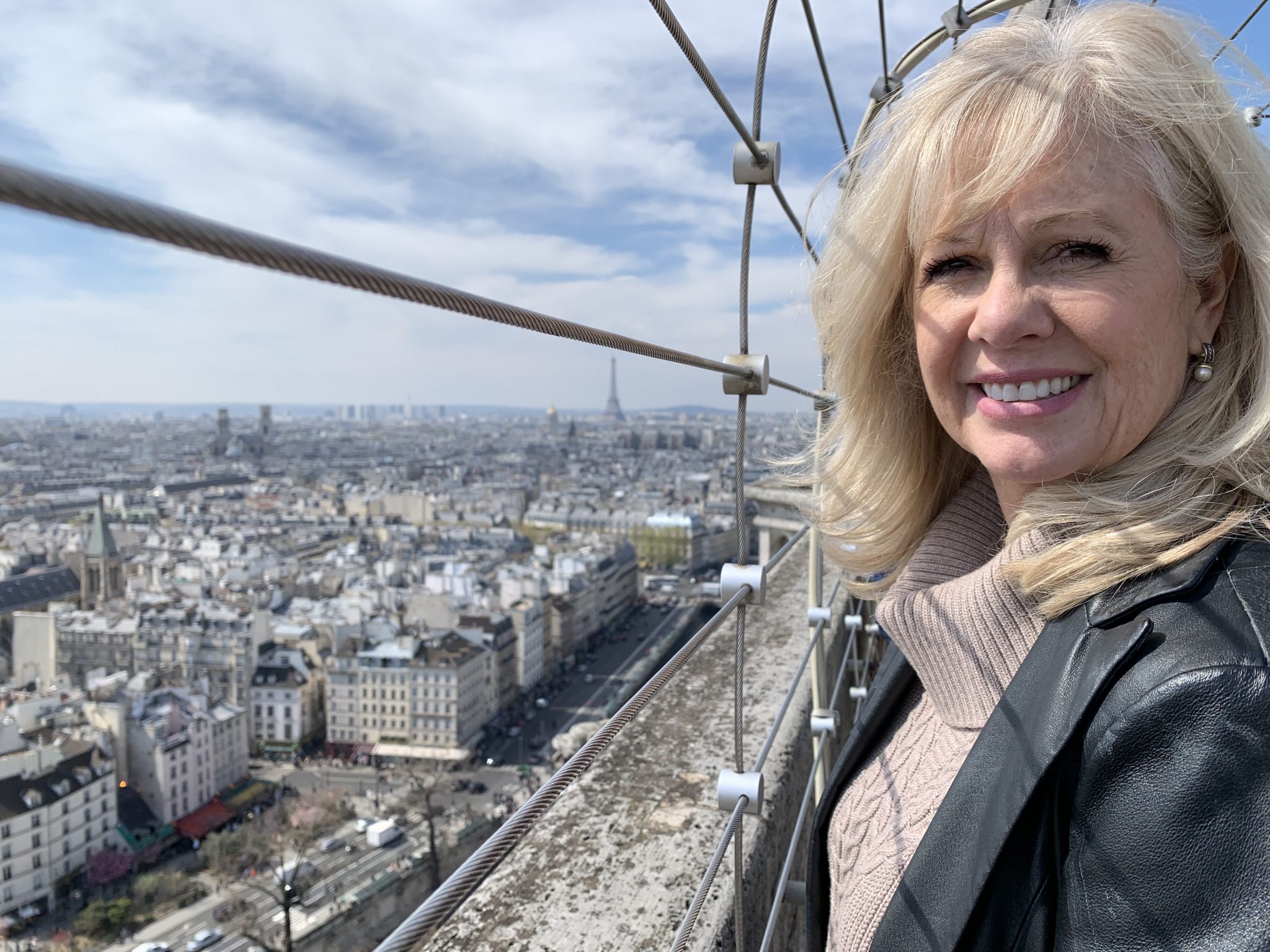 My 2nd favorite view is always toward the Sacré-Cœur at Montmartre, which is where we headed after visiting Notre-Dame (and stopping for wine, of course). 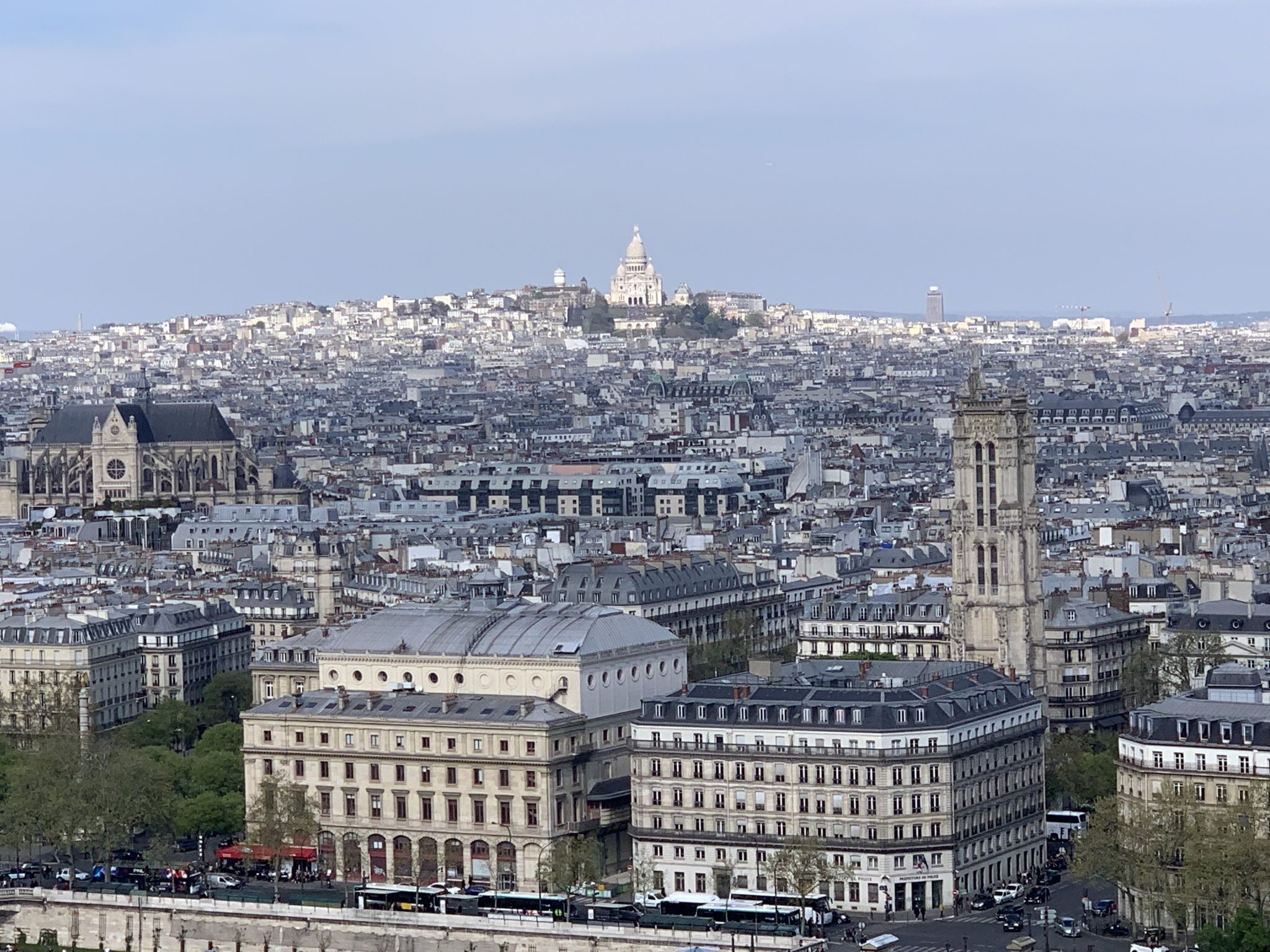 There is also a view toward the Panthéon in the Latin Quarter. 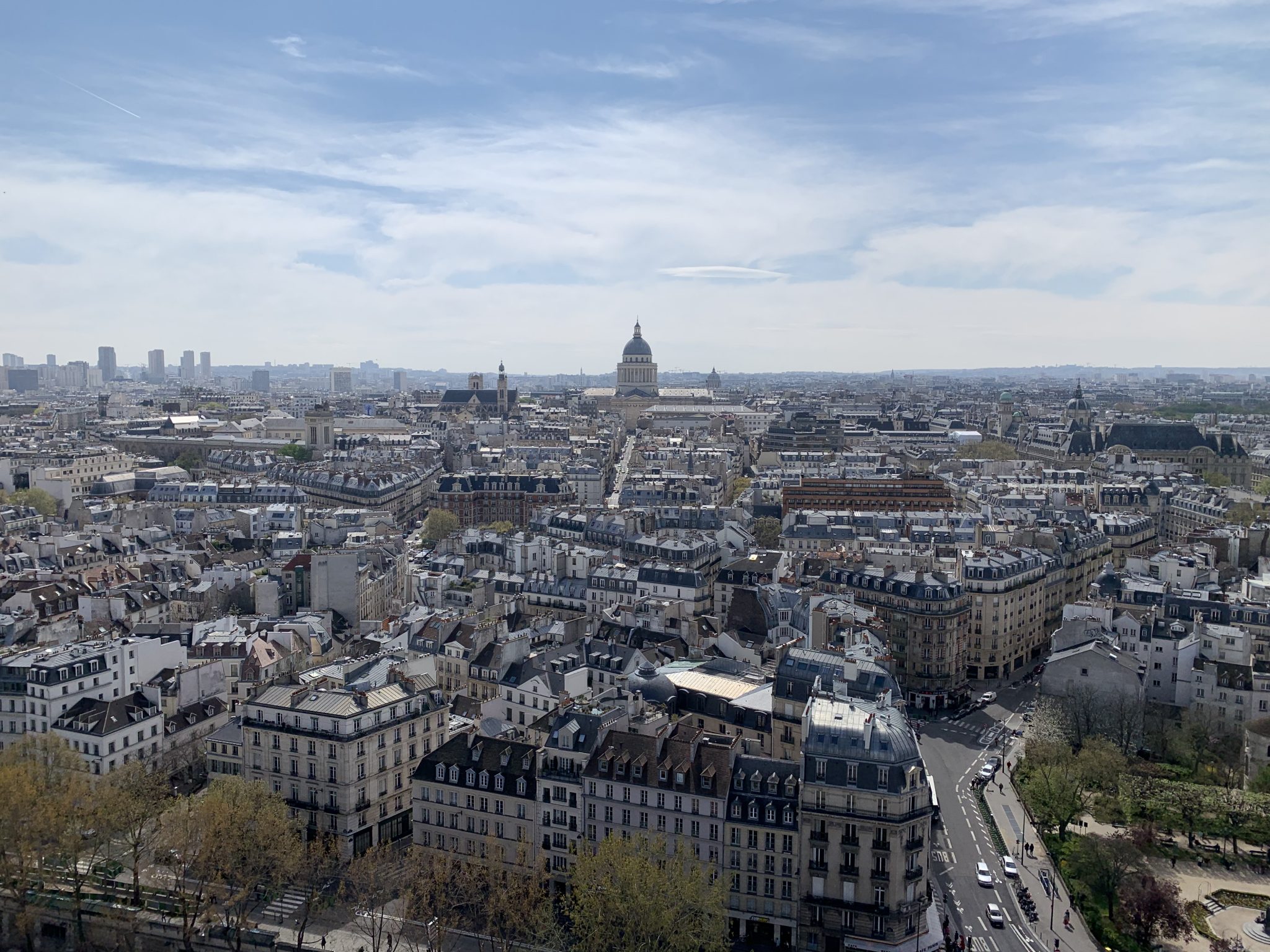 If you stick a camera through the fence and point it downward, you can see the courtyard below the first landing that we had just climbed up from. In that courtyard there is signs of scaffolding and equipment, most likely from the restoration that was taking place. 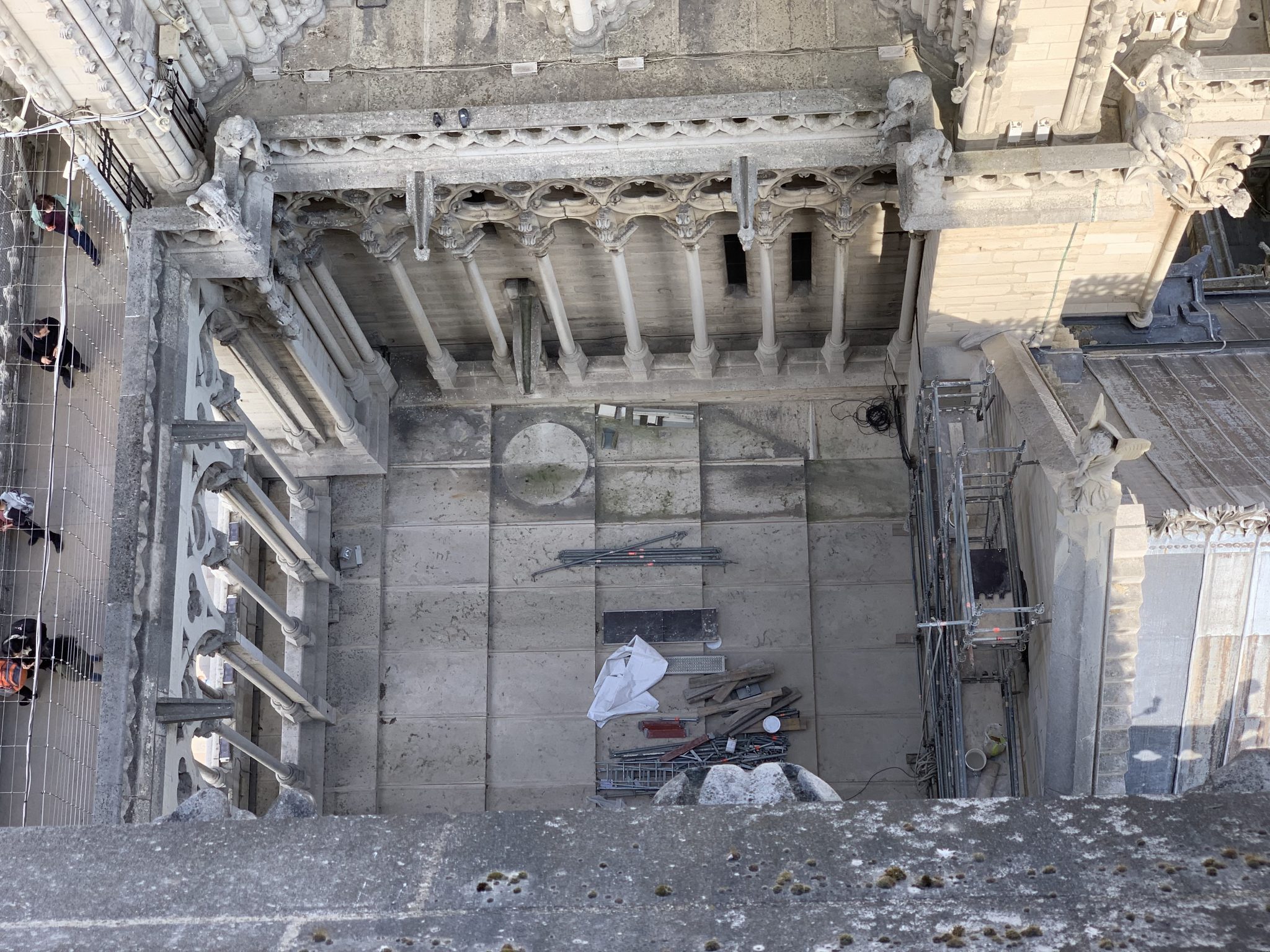 Views from the Rear and Sides

After exiting the tower, we walked around the south side of the cathedral, strolled through the park and visited the Memorial at the edge of the island. The trees were  in bloom. 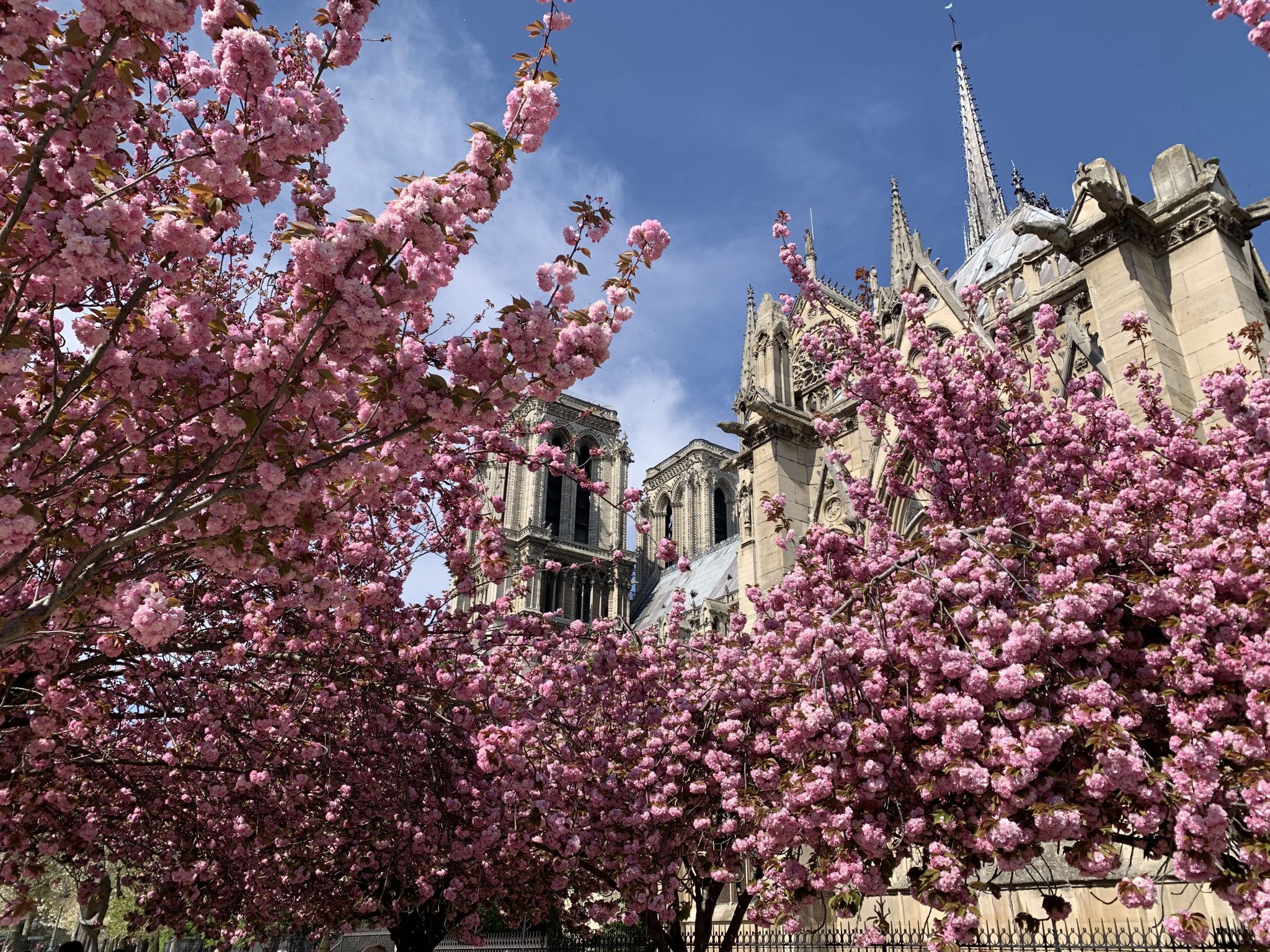 The statue of John Paul II stands just in front of the south rose window. 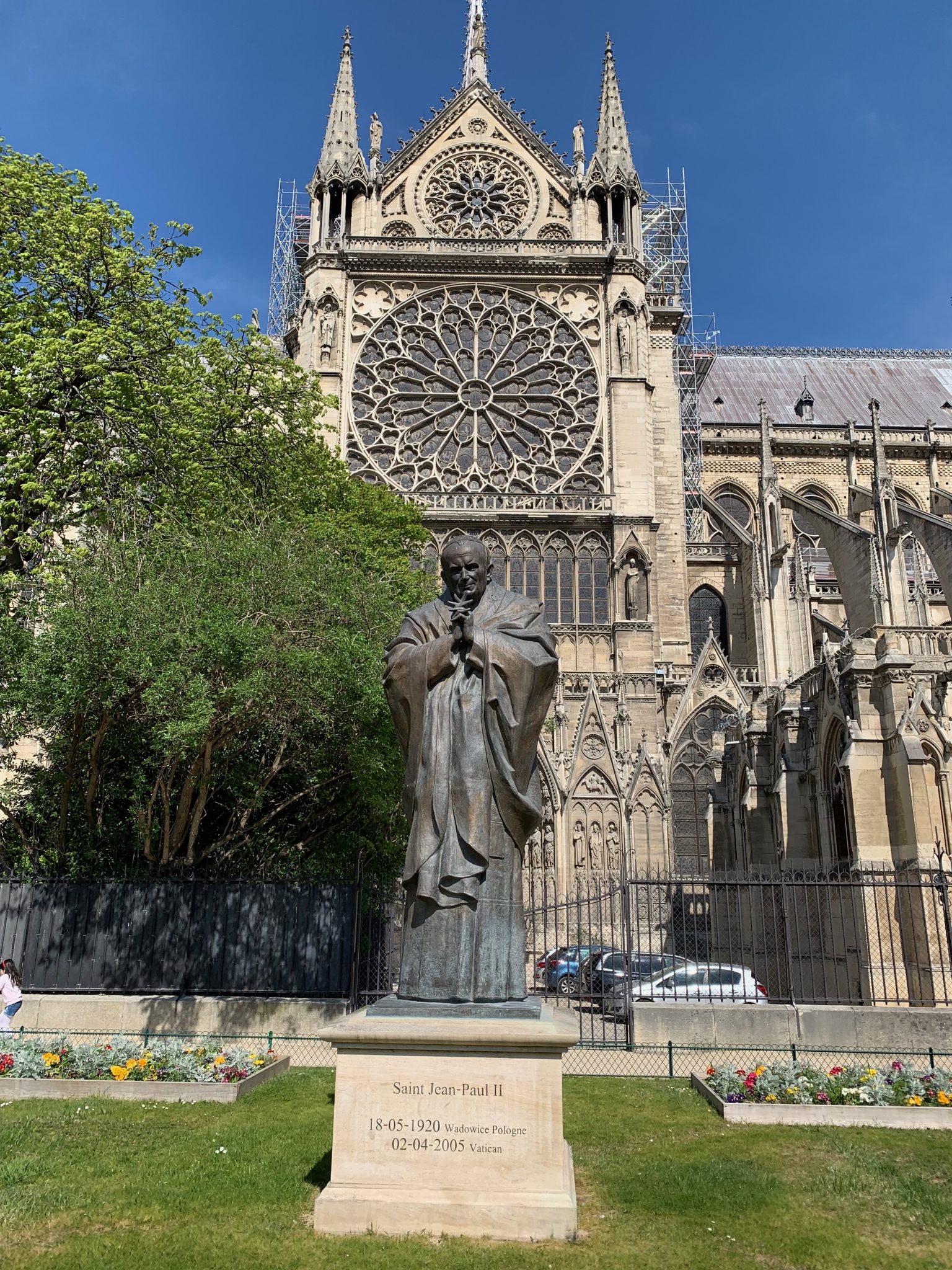 From the rear, the spire and roof are visible, and the tops of the two towers (with people on the left one) can be seen just over the scaffolding. 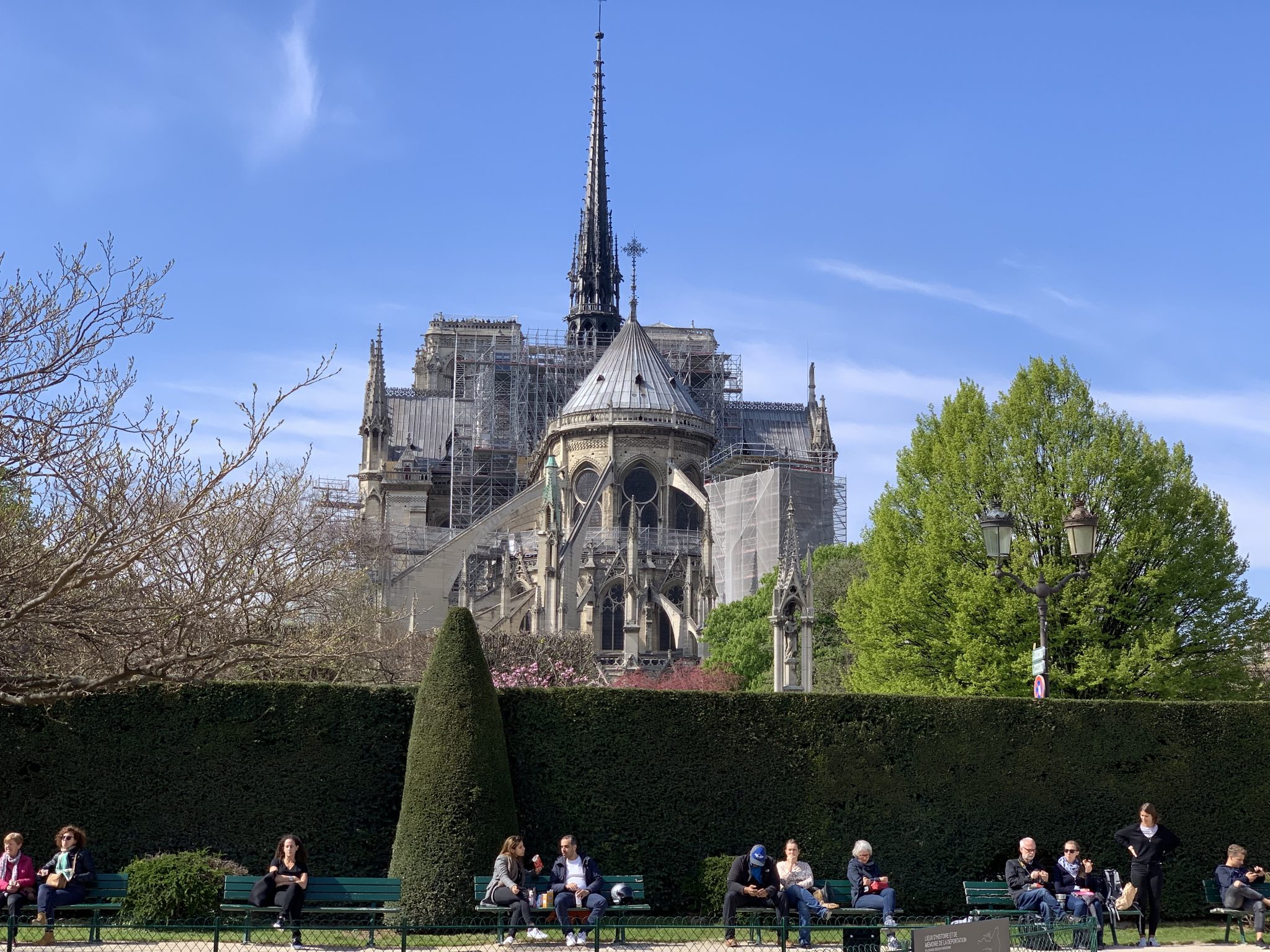 We walked across the bridge and the trees and perfect weather 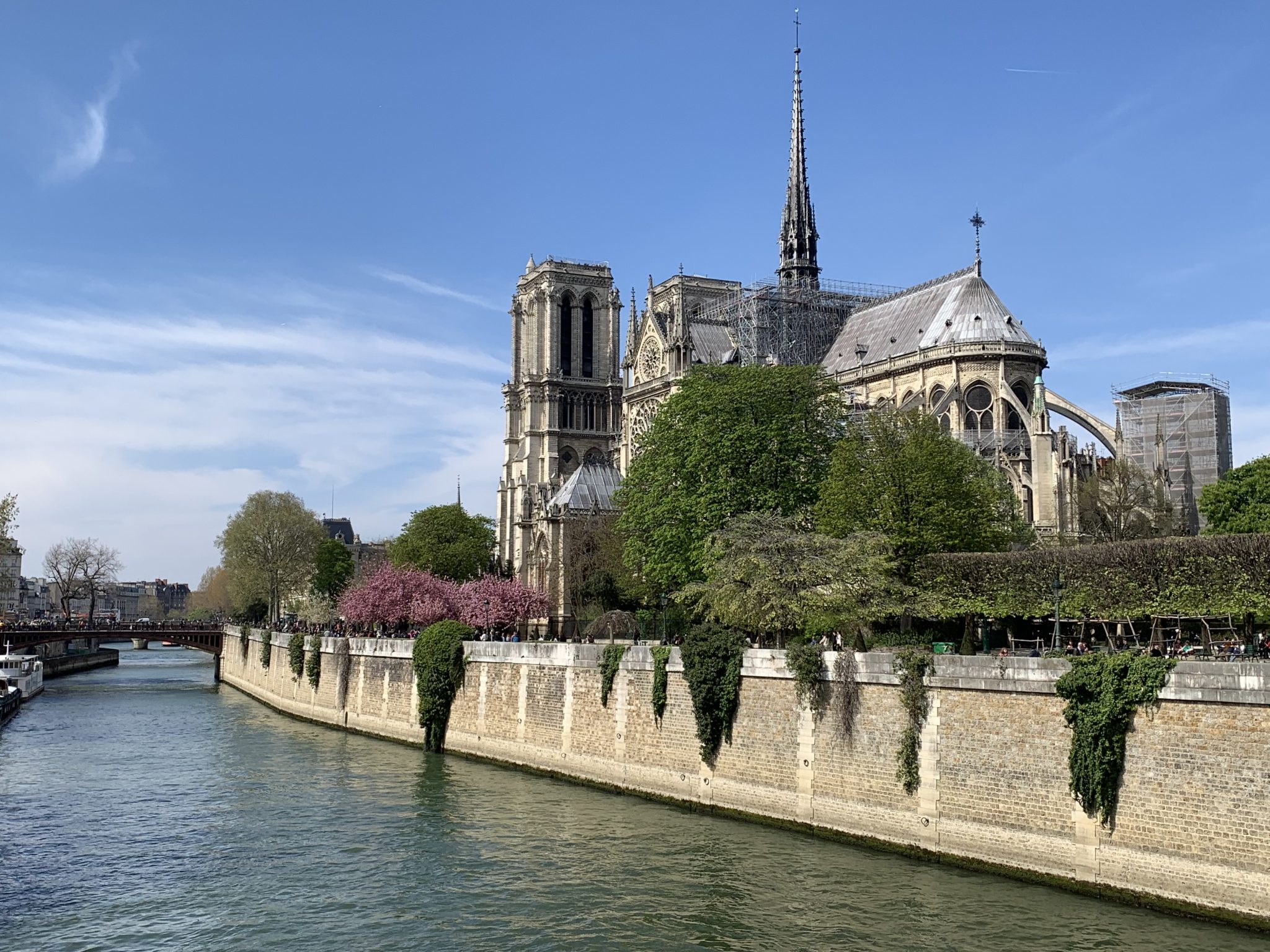 And I couldn’t resist one more parting shot from across the river, probably my last photo of Notre-Dame before the fire on that day…and the last picture I took that showed the spire and roof intact and glorious. 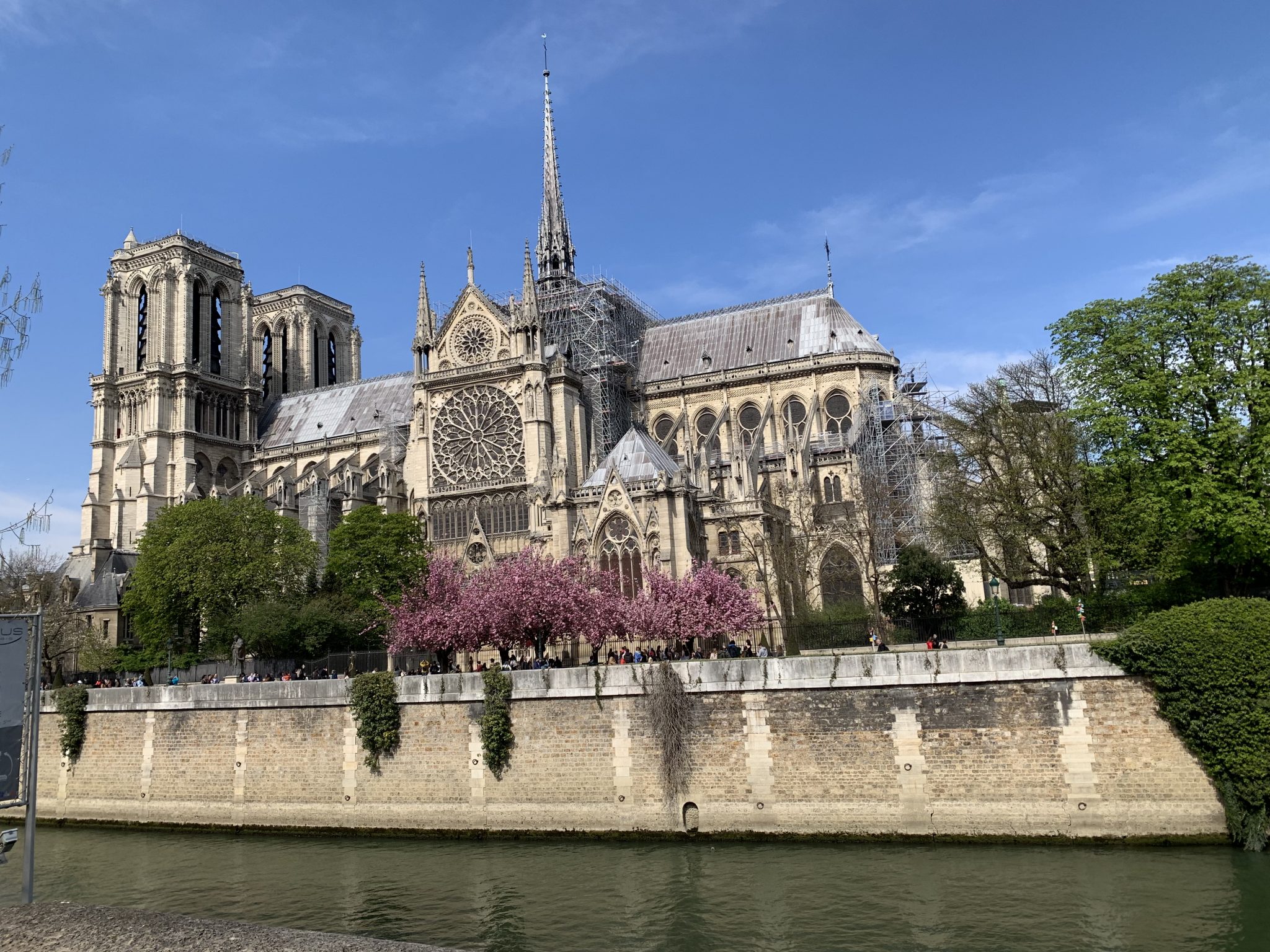 We eventually did make it to Reims and viewed the amazing cathedral there. Until Notre-Dame in Paris is reopened (and it most certainly will be) a trip to Cathédrale Notre-Dame de Reims is more than worth the time.