The Sargasso Ogre is the eighth story originally published by Street and Smith. The Bantam one I have is one of the first Doc Savage books I remember reading, bought from a now closed bookstore on Long Point in Houston. 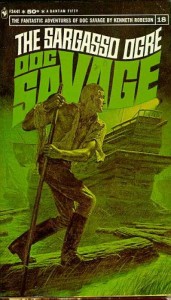 The Sargasso Ogre picks up where The Lost Oasis ended, with Doc and his crew in Alexandria, Egypt, about to board a liner to take them and the diamonds they obtained in The Lost Oasis back to New York. An attempt is made on Long Tom’s life. Doc rescues him, but cannot question the kidnappers as they are killed by those who hired them. Doc and his time board the liner Cameronic, with the diamonds (as well as other valuables) under heavy guard. An article in the Alexandria newspaper about a bank clerk found missing gives Doc clues about the chaos ahead.

While at sea, many suspicious events lead to a search for a large man named Bruze, and to the poisoning of Monk and Ham (who Doc brings back from the dead). The radio is sabotaged, the ship is set of course as the captain is unknowingly held hostage and Bruze and his crew of forty men eventually try to take over the ship. They are stopped, but not before the permanently damage the engines.? The ship has been aimed toward the Sargasso Sea, when Bruze (the Sargasso Ogre) and his men have hijacked and abandoned several ships.? Bruze has a headquarters in the mass of ships and seaweed that make up the Sargasso Sea. Hiding there as well on a ship are a bevy of beauties (led by Kina le Forge) who have barricaded themselves in the ship that was once Bruze’s treasure ship.

Several battles ensue, with Doc matching his strength against Bruze, ultimately rescuing all of the stranded survivors and finding the secret way out (I won’t spoil the ending!).