Huntsville State Park is a little over an hour north of Houston, just west of I-45 and a bit south of the city of Huntsville. It was a blue-sky day, semi-low humidity so we were off for another weekend hike. We didn’t see as many “critters” as we saw at Brazos Bend State Park on our last hiking adventure, but we did see (and almost step on) some large copperheads (pictures below).

There was a line of cars already there when we arrived, and one kiosk for entry. The cost for entering for the day is $5 per adult.

Our targeted trail for the day was the Chinquapin Trail, a 6.8 mile loop around Lake Raven and the park. The description of the trail on the park map says:

If you want to see the whole park, this is the trail. This trail encircles the entire lake. You will travel over marshes teaming with wildlife where you are likely to see shorebirds and nutria. Listen carefully for the drumming of a pileated woodpecker high in the pines and watch for eagles as you cross the dam.

It is the orange trail on the map below (link to PDF of map at the park’s web site). 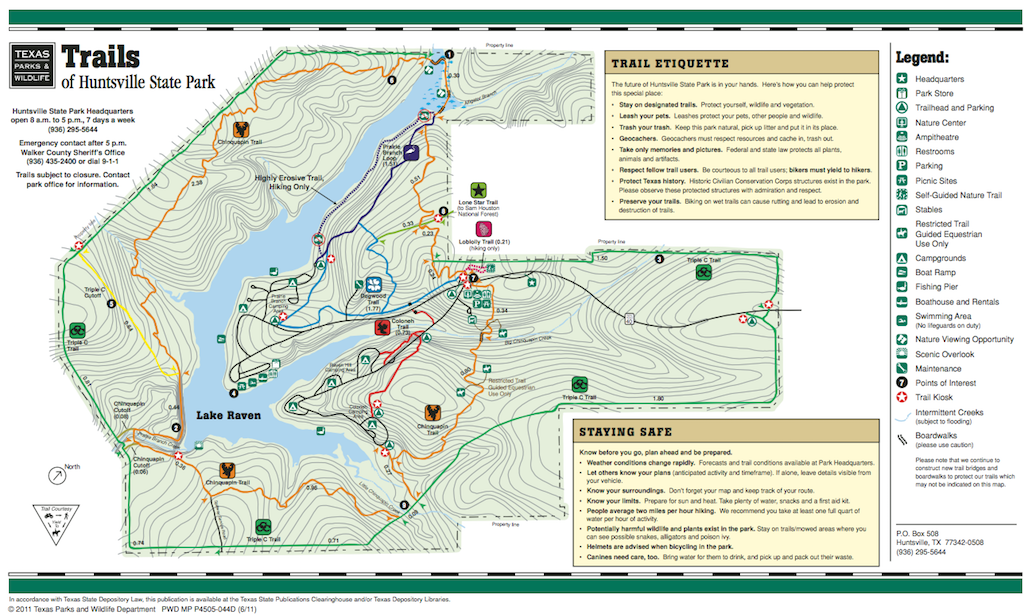 We started off toward the top of the map, parking at the Nature Center. There was a monarch butterfly display at the Center, but it seemed that the height of monarch season had already passed, as we saw few of them.

The park is surrounded by Sam Houston National Forest and this State Park reflects that. The hike is almost all through the trees. Though there had been a lot of rain and rough weather nearby (and there were some down trees), the trails were not muddy. And the park has lots of wooden walkways and bridges for the parts that are frequently wet. 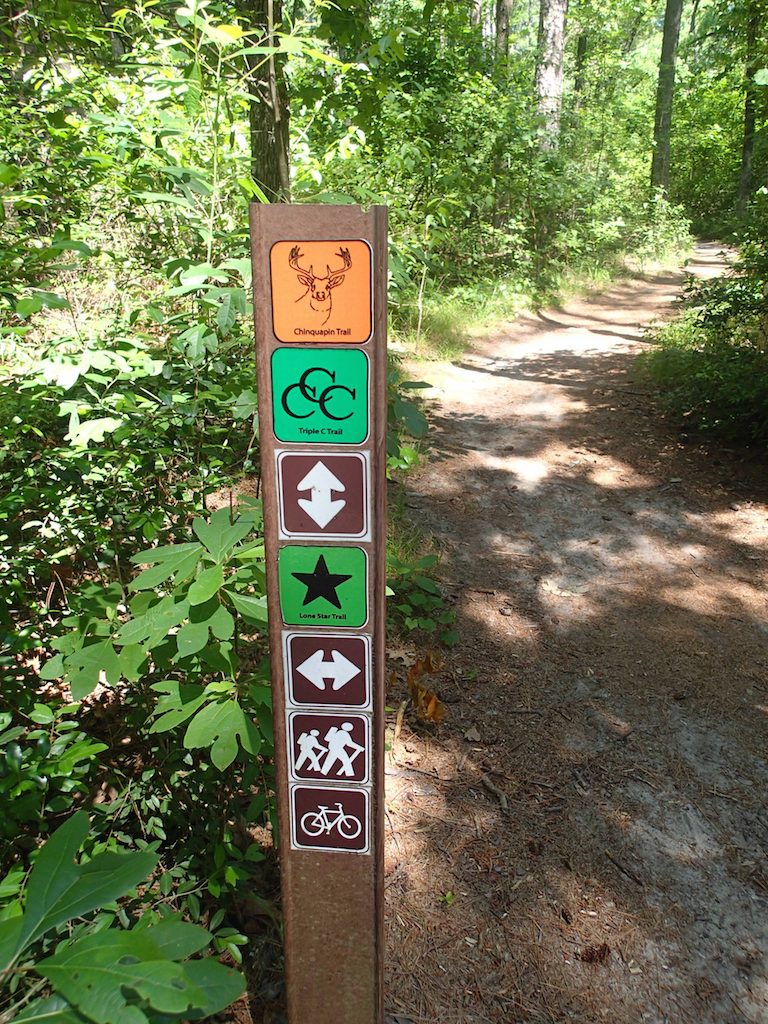 The trails are very well marked. In the photo you can see the trail marking showing the intersection with the Lone Star Trail, the 100+ mile trail that runs through Sam Houston National Forest. The orange marker at the top is for our chosen trail, the Chinquapin (apparently named after a couple of creeks in the park), and the green marker is for the CCC trail. The CCC trail is the longest of the trails in the park, going 8.5 miles along the border of the park. There are two shorter trails in the park: the Prairie Branch Loop and the Dogwood Trail Loop, both of which are less than two miles long.

Though some of the Chinquapin trail on the back side of Lake Raven goes along a rocky service road (in the map above, it is the part of the trail at the bottom left), we were always assured that we were on the right trail by the orange markers, which are every half-mile and at every intersection.

The trail we chose was deceptively long, but it was a great hike. Part of the deception was in how the map depicts Lake Raven, and our expectation that a view of the lake would be “just around the next turn in the trail.” If you look at the top of the map, it shows a very skinny part of the lake that sticks out. I do not know if the lake gets that high, but, as you can see in the next photo, that part of the lake is nothing but greenery, with a bit of water underneath it. There is a pier out over the brush, and it looked like a great place to spot an alligator. But, unlike at Brazos Bend where they were everywhere, we saw no gators. 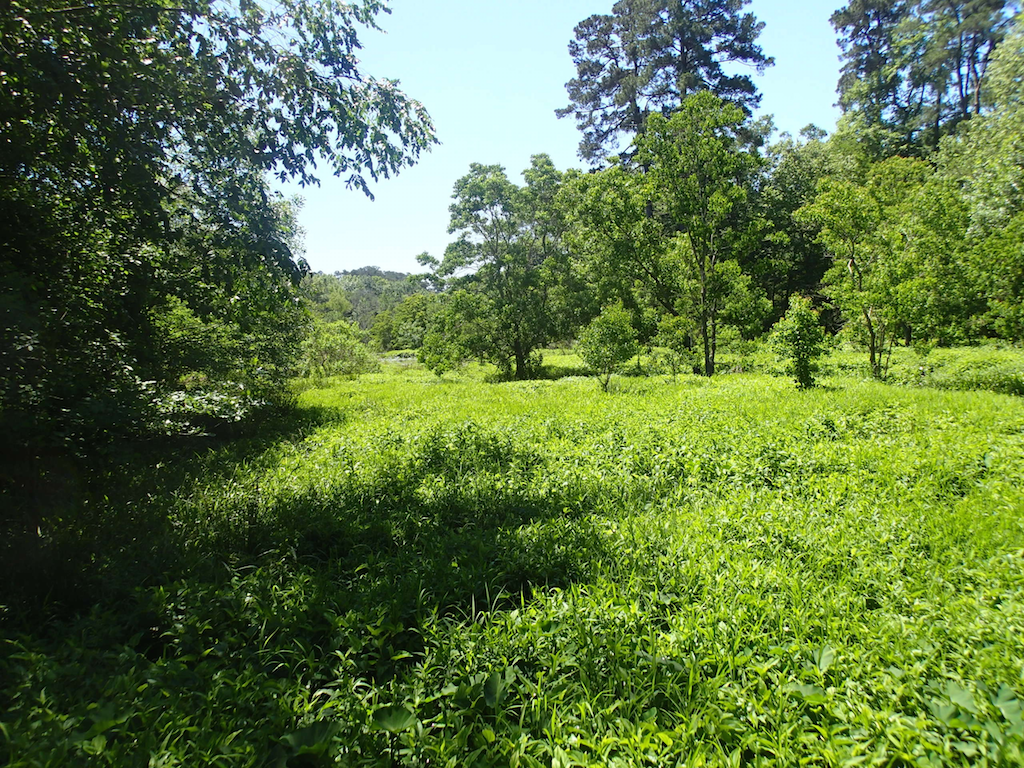 There were quite a few mountain bikers on the trail, which was in most places wide enough to accommodate bikers passing on the left. Parts of the trail were mostly sand, and by the tire tracks, it looked like they were a challenge to some of the bikers.

And there were quite a few hikers with dogs. Both bikes and dawgs had challenges with the multiple places where there were trees down across the trail (we assume from the recent storms), whereas those of us unencumbered just scrambled over. 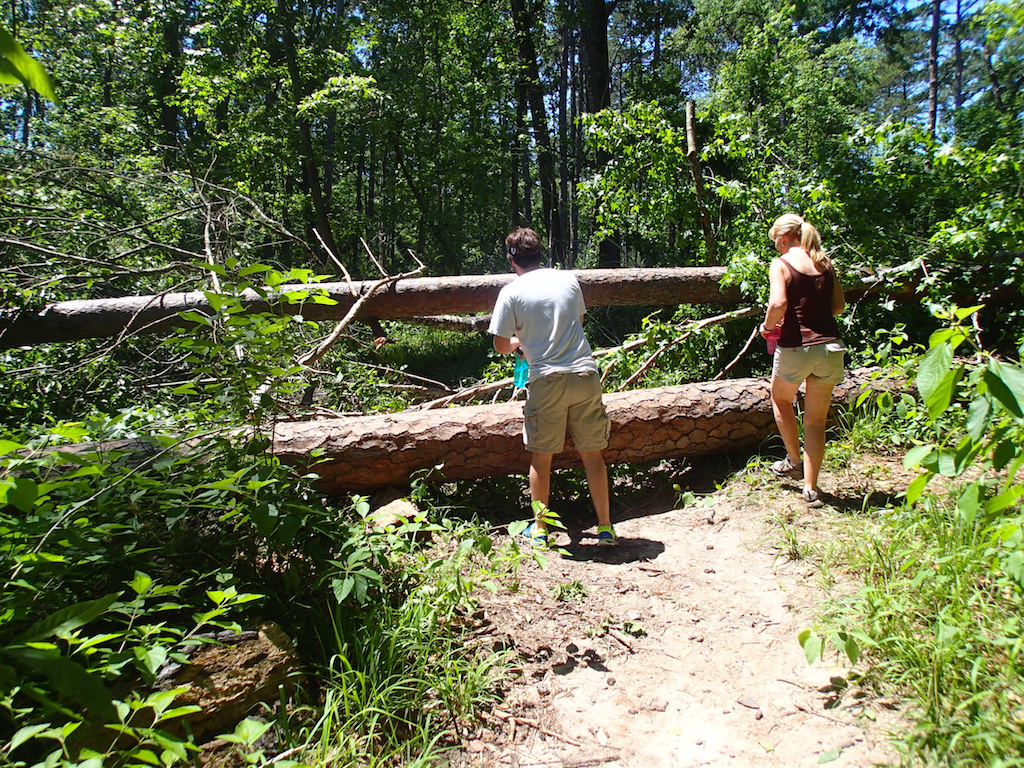 The trail finally does come out along Lake Raven, walking along what seems to be a man-made dam to a spillway.

This day there were several kayaks, fishermen and pedal-boats out on the lake. The building in the distance is Raven Lodge. The majority of the campgrounds and picnic areas are grouped around the lodge. 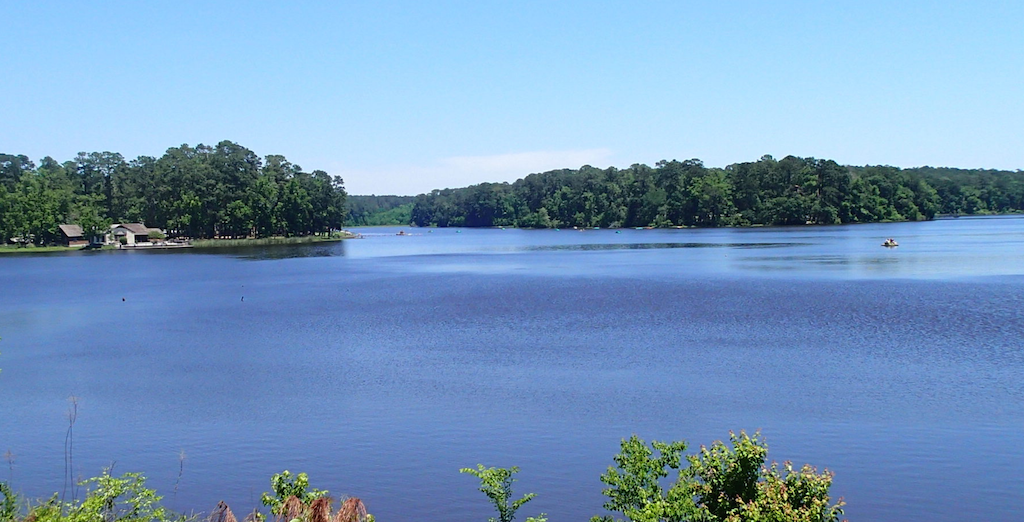 Going around the backside of the lake, we ran into a biker who had just run off a six foot rattlesnake. As proof, he offered us a picture he had taken…and he said he’d tried to grab its tail. A bit further on, around the fifth mile of the trail, we ran into these two copperheads in the middle of the trail. When I tried to move them out of the way with a stick, I at first thought they were rubber snakes, as they did not change their coil or the angle of their heads. Suddenly one of them headed toward me, but I was able to push him into the woods, and he (or she…I didn’t stop to ask) took off deeper into the woods at quite an amazing speed. The second one had already headed into the brush, as we could hear it rustling through the brush. 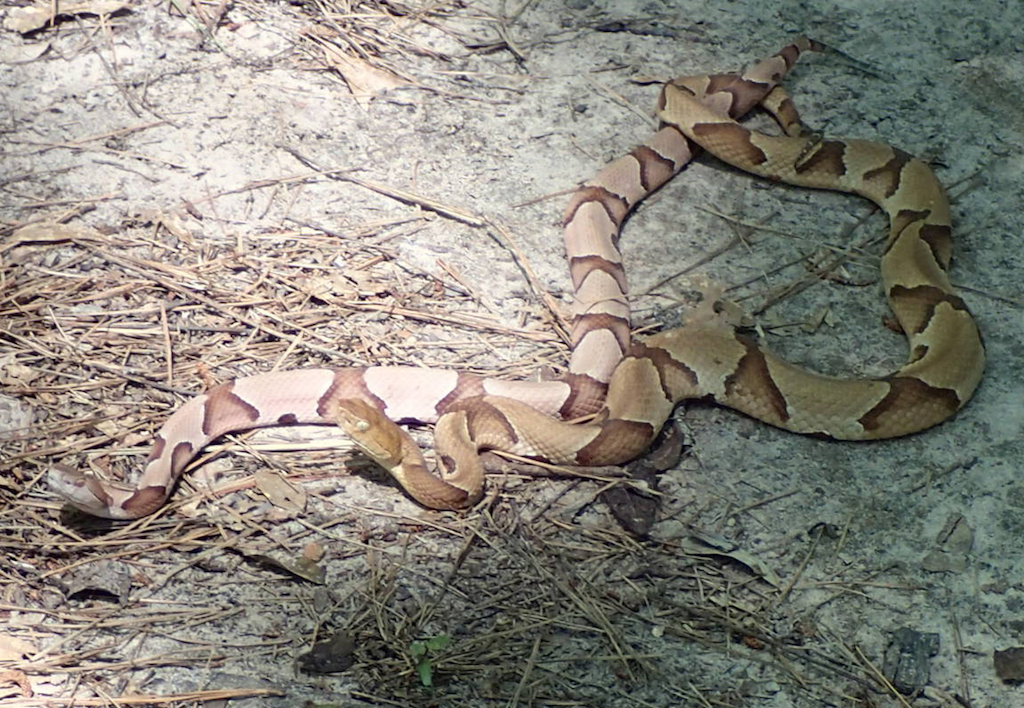 In spite of the snakes, and the mosquitos, it was a great hike. We saw a few woodpeckers in flight, and heard a ton of them, but never saw any other wildlife. We did see lots of “babbling brooks”… 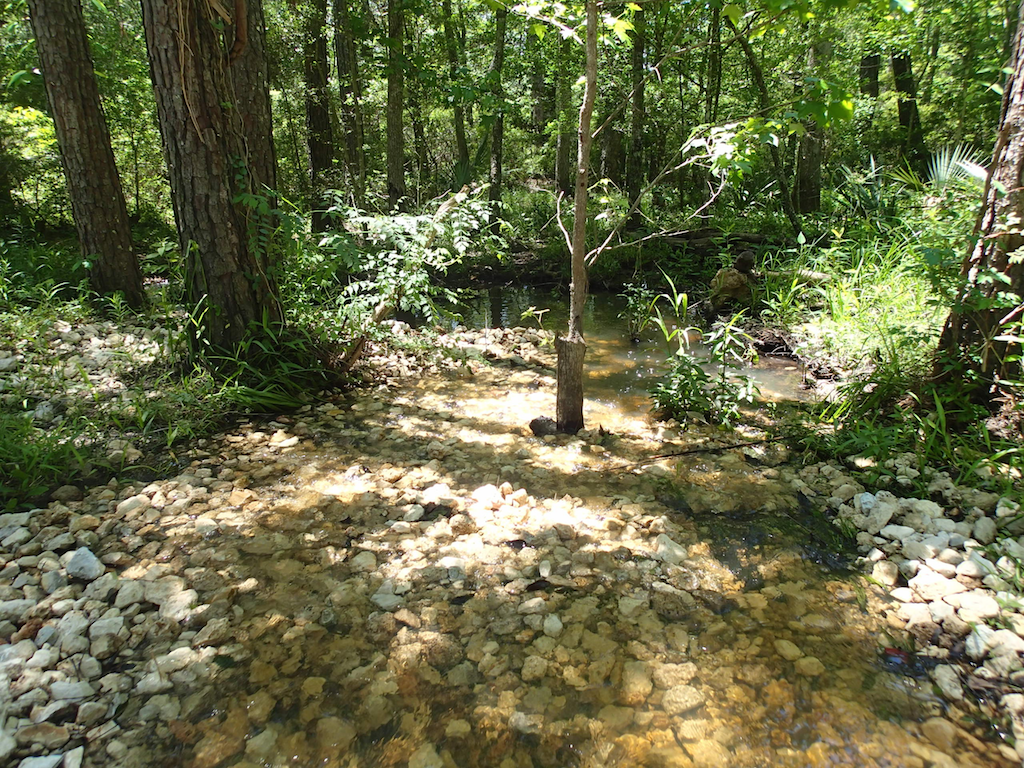 …colors other than green… 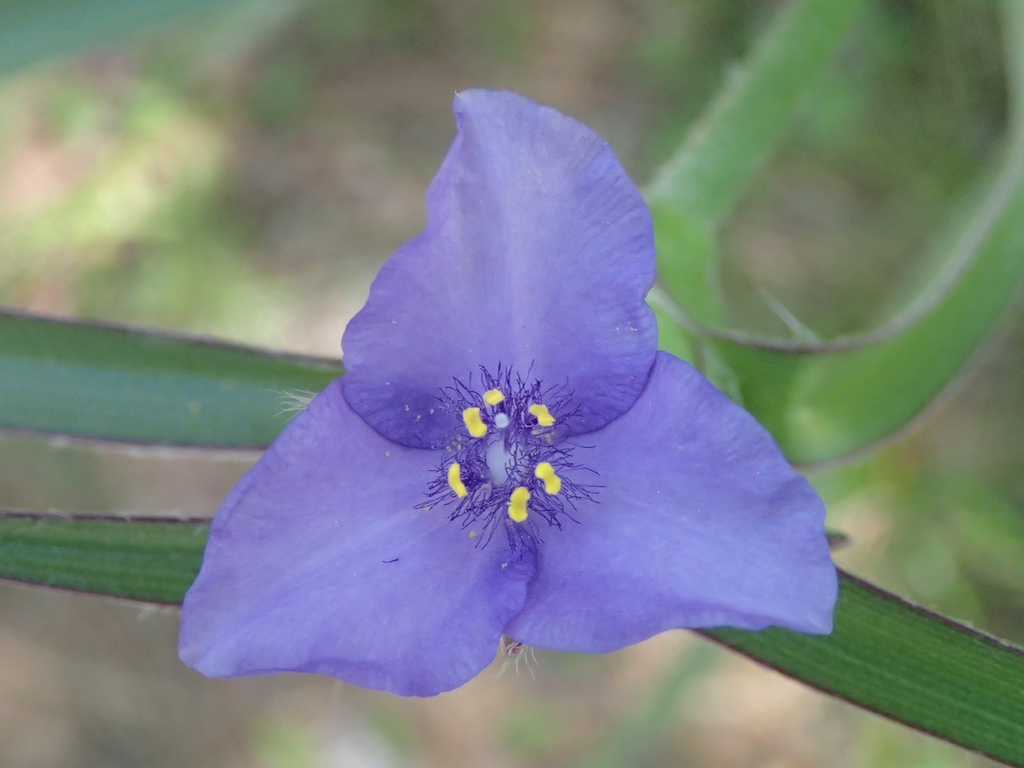 … and lots of bridges and boardwalks through the trail of green. 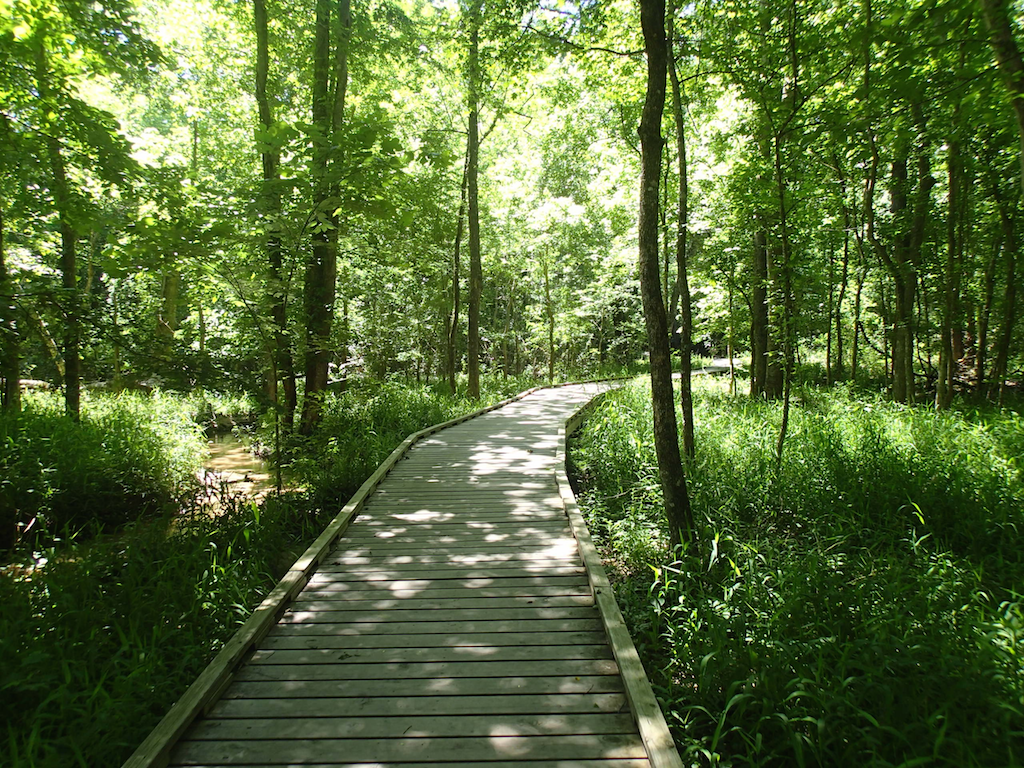 There are, of course, lots of other activities to do here, including the boating on the lake, camping and picnicking in the shelters. But it gets high marks for well maintained and marked hiking trails. Granted, this was early May; I’m not sure how enjoyable this would be in the SE Texas August or September. 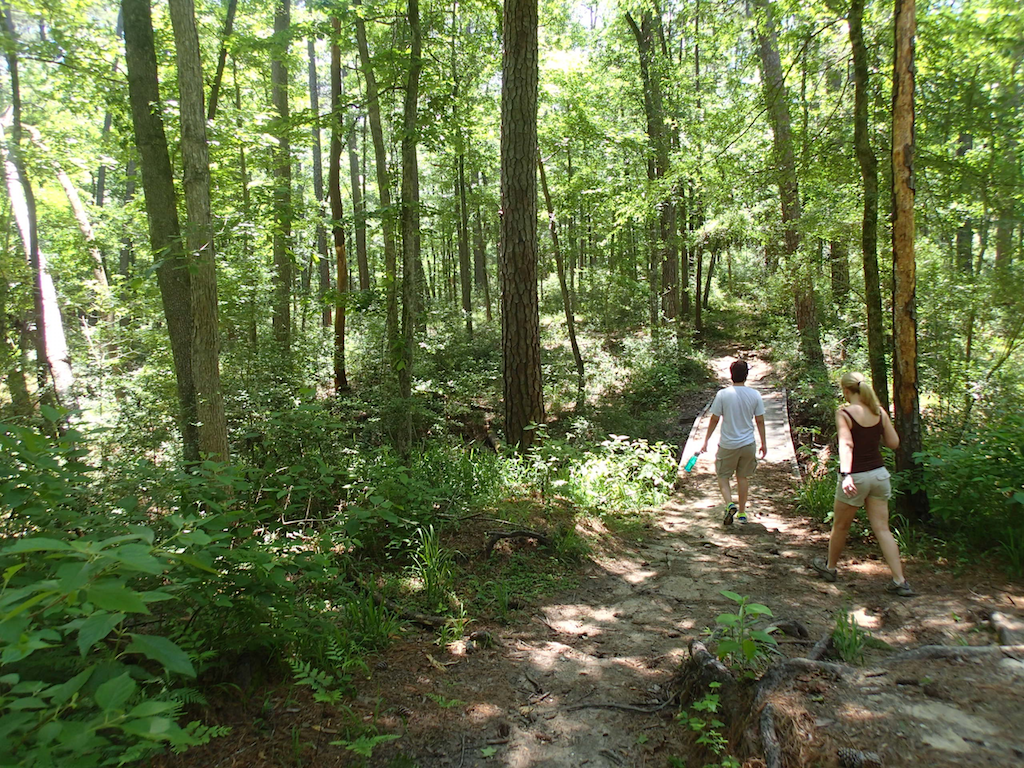