This is the 18th story in Street and Smith’s original publishing order. 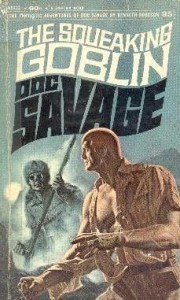 Doc goes to Maine, at the request of Chelton Raymond. He finds not only an assassin whose bullets vanish and who moves so well through the woods that even Doc cannot track him….but also an old fashioned family feud, between the Snows and the Raymonds. The assassin wears a skeletal mask, and his custom rifle makes a squeaking sound when fired. The Snows and Raymonds have a legend of such a shooter from long ago in their history. Upon his arrival, the Snows attack Doc and his men, thinking they are there to help the Raymonds. Doc encounters the Squeaking Goblin, but cannot capture him. Doc, his men and some of the Raymonds are captured by the Snows and taken to an island; Chelton Raymond escapes, but he is apparently shot, and falls in the water (Doc does not find his body). Doc finds evidence of a mysterious book about a “Black Raymond” in Chelton Raymond’s safe on his boat, but the book is stolen before he can read it.

Doc follows the Snows back to Kentucky, where the Raymond and Snow feud has escalated, and the Squeaking Goblin is there as well. He sends Ham off to investigate or find another copy of the book, while he narrows down the suspect list, and tries to stop the feud while avoiding being killed.

The identity of the Squeaking Goblin was easy to deduce in this story, but other than that it was well written, with a slightly different type of locale and criminal motive than previous ones.