While in Moscow we (ok maybe just me, but Audrey humored me) wanted to visit the Cosmonaut museum. The Cosmonaut museum is very recognizable from quite a distance with its tall swooping tower with a rocket ship on the top. The taxi drove right by it, and deposited us in a park-like area that we didn’t even know was there. It had a very large main entrance, with a statue of Lenin behind that – with a large pavilion behind that statue – and more to be seen in the distance. We started exploring it, and it is so vast that we could never have covered it all. This was the VDNKh (Vystavka Dostizheniy Narodnogo Khozyaystva) – the Exhibition of Achievements of National Economy. (Выставка достижений народного хозяйства, ВДНХ).

The Wiki entry for this exhibition area states that “the territory of VDNKh is greater than that of the Principality of Monaco and has approximately 400 buildings.” We certainly didn’t cover all of it, nor enter all 400 buildings.

The General Entrance caught our eye, as did the monuments behind it. Like everything in this park (and in most of the areas we visited in Russia), the entrance was massive. 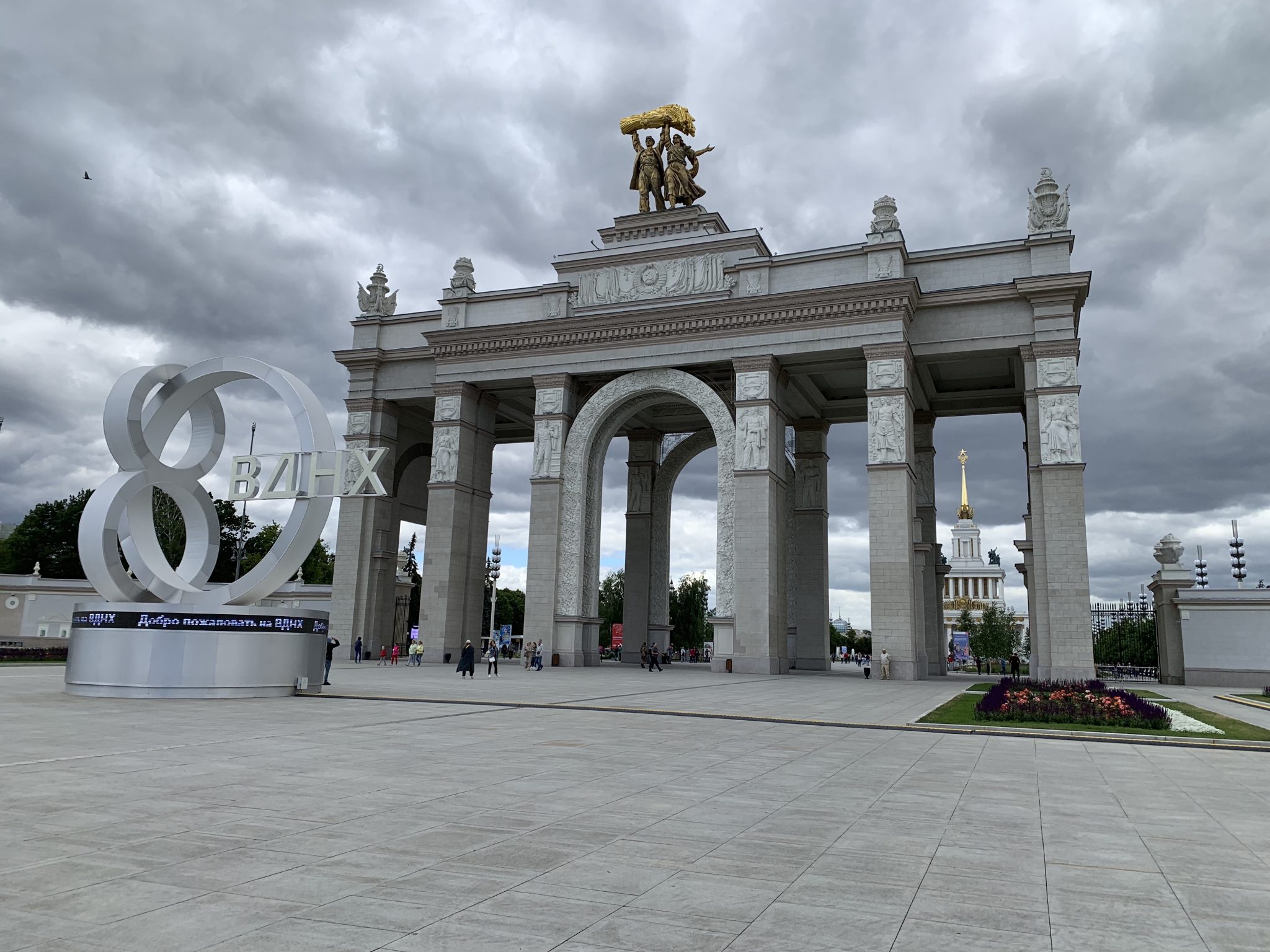 Looking through the entrance you can see the central pavilion. 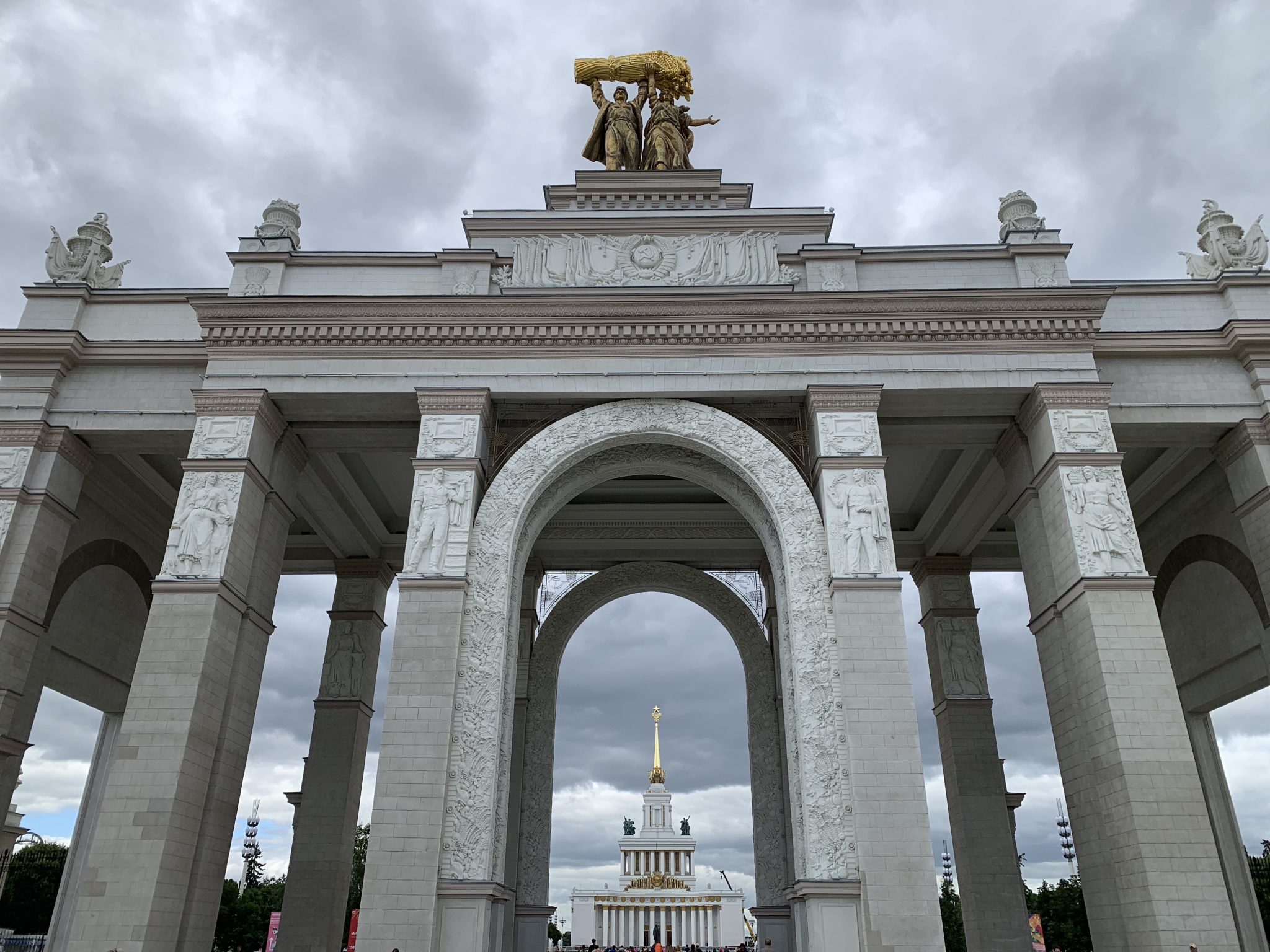 In front of the Central Pavilion is a statue of Lenin (and, on this day, my gorgeous wife!). 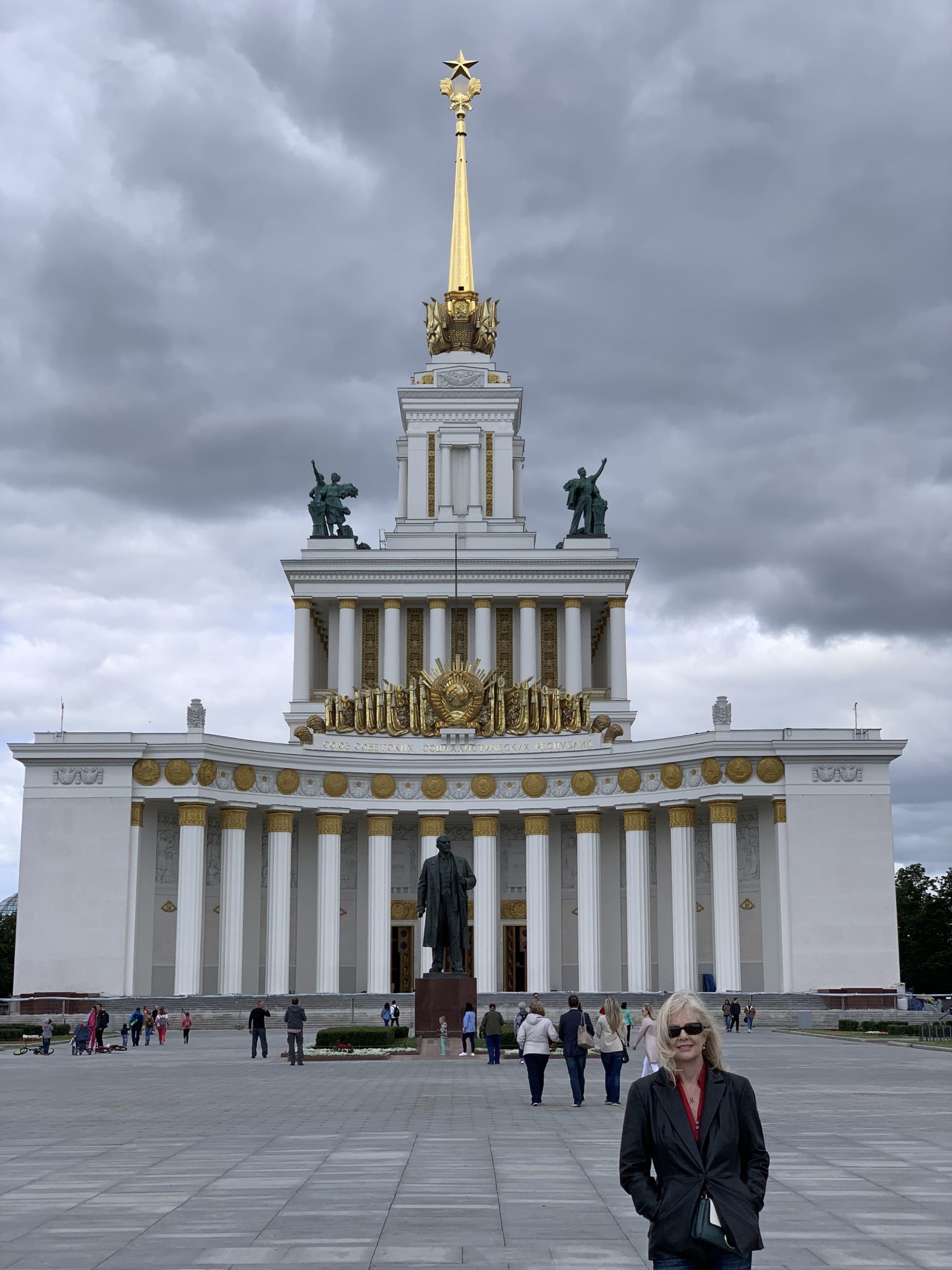 The photo below shows a better view of the statue of Lenin and the figures on the Pavilion behind the statue. 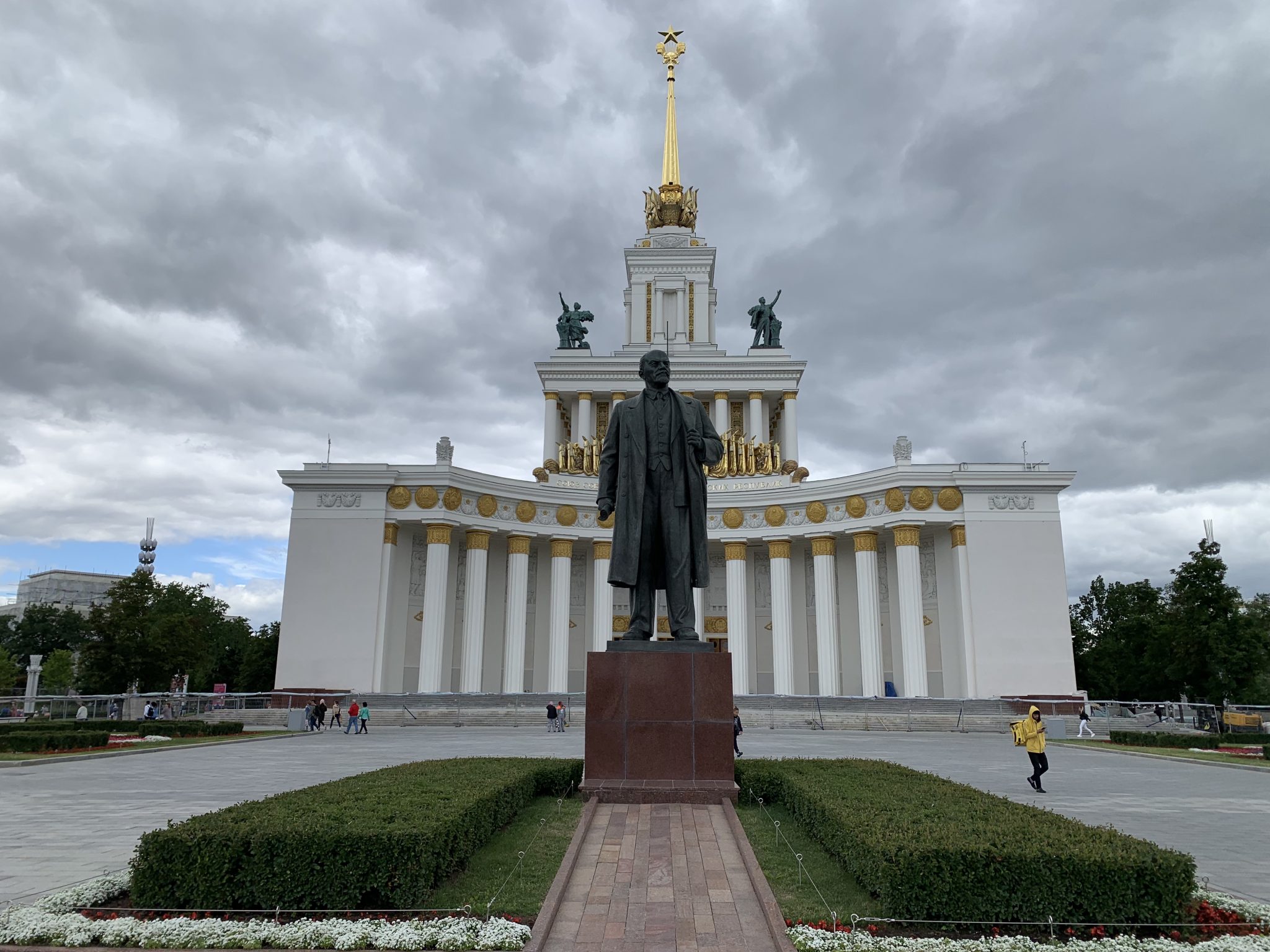 For a perspective on the size, this is a map that is on-site. It looks a bit like the Millennium Falcon. doesn’t it? The entrance we came through is at the bottom near the depiction of the Cosmonaut monument. 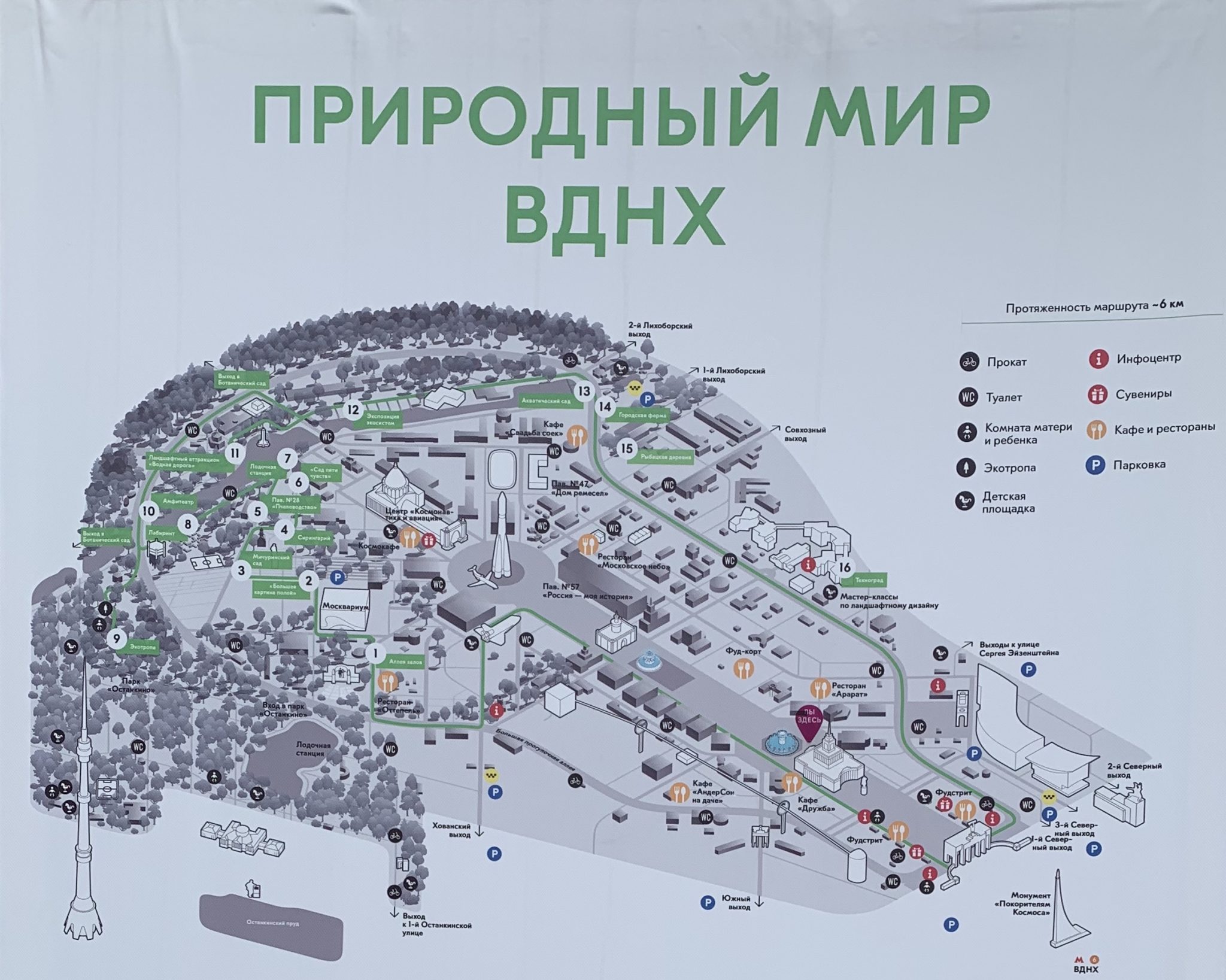 Below is a map in English from 2010 (from archive.org). Several places are not on this map (like the Moskvarium), but it does have translations and labels for all of the buildings.

We walked around the Central Pavilion into what was labeled on some of the maps as the Central Alley. It was the Fourth of July, in the middle of a weekday and even on a cloudy and windy day (as can be seen in the photos) there were people everywhere in this park. The first thing that caught our eye was the very ornate People’s Friendship Fountain.

Some of the buildings were intended to represent different areas of Russia or of the former Soviet Union. Some represented different technologies or practices, like Energy or Farming. We went into several. Most had little to no English but had a lot of interactive pieces. The building below is the Pavilion of Armenia. 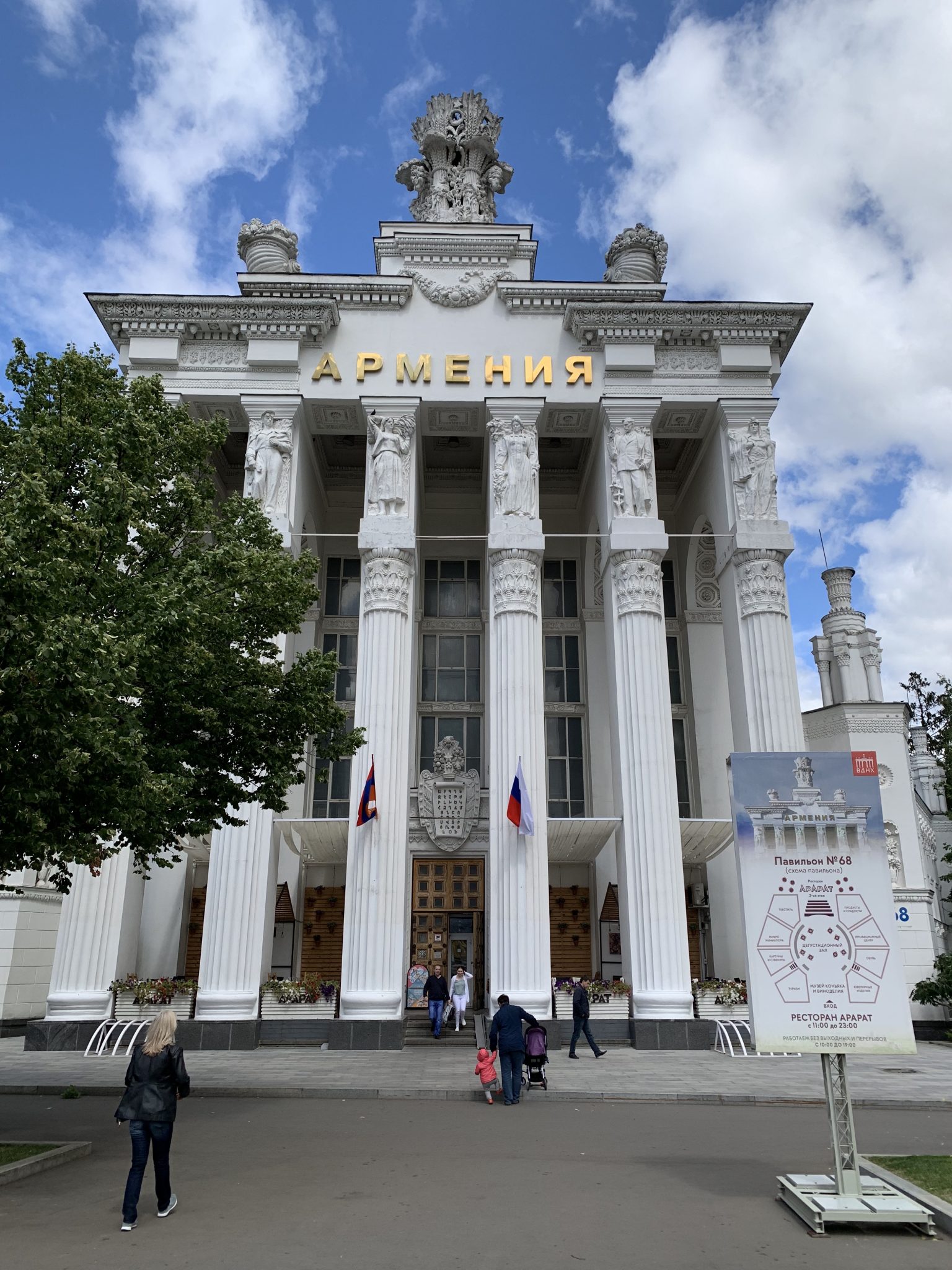 Inside some of the buildings (like the Armenia building) there were shops. In others there were exhibits. The very first building we went into (the Palace of Public Services) had some interactive histories of Russian – in Russian of course. They also had a way to put your face into a picture of one of the people from Russian history – as a way to demonstrate the technology and educate on the past. Below is one of mine as a Russian from an earlier time (as a long time Green Bay Packers fan, green is a good color!). 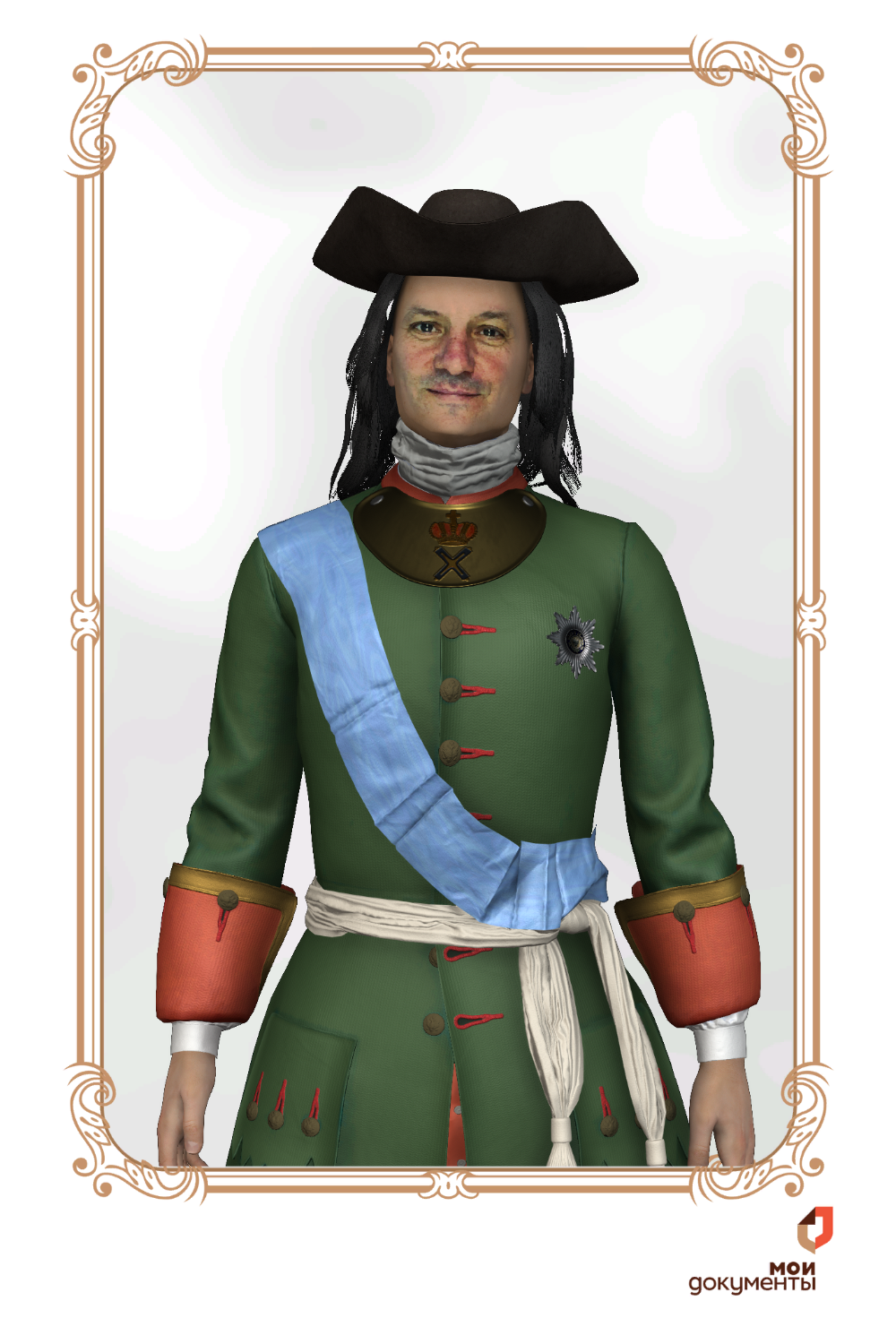 As mentioned earlier there are about 400 buildings in the park, of all types of architecture. Below is a photo of more buildings looking towards the needle tower. 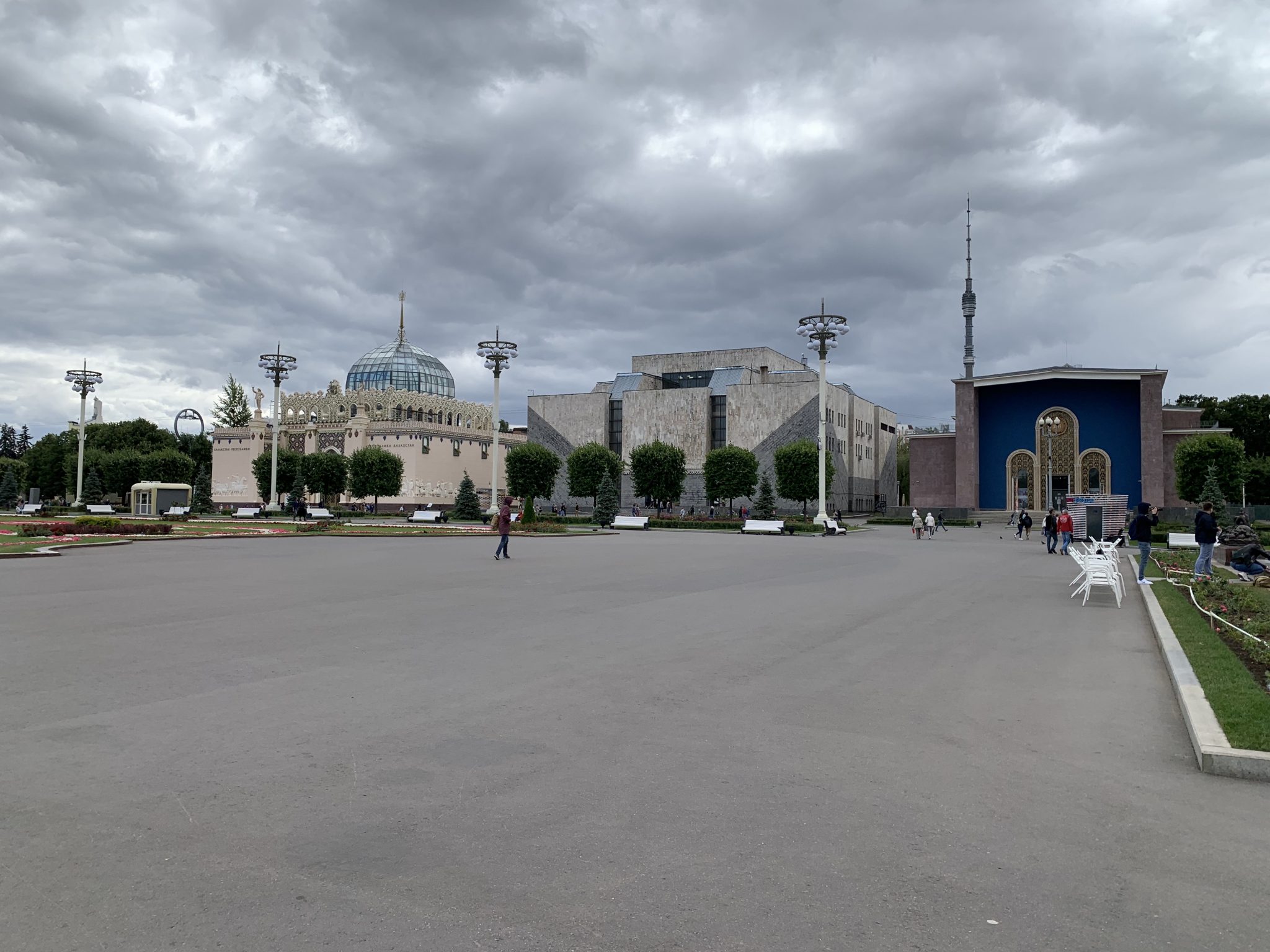 After we made our way through the park, and by that time many of the clouds had cleared away. Below is a photo of the building on the far left in the photo above, the Kazakstan Pavilion. Many of the buildings are intricate architecture like this. 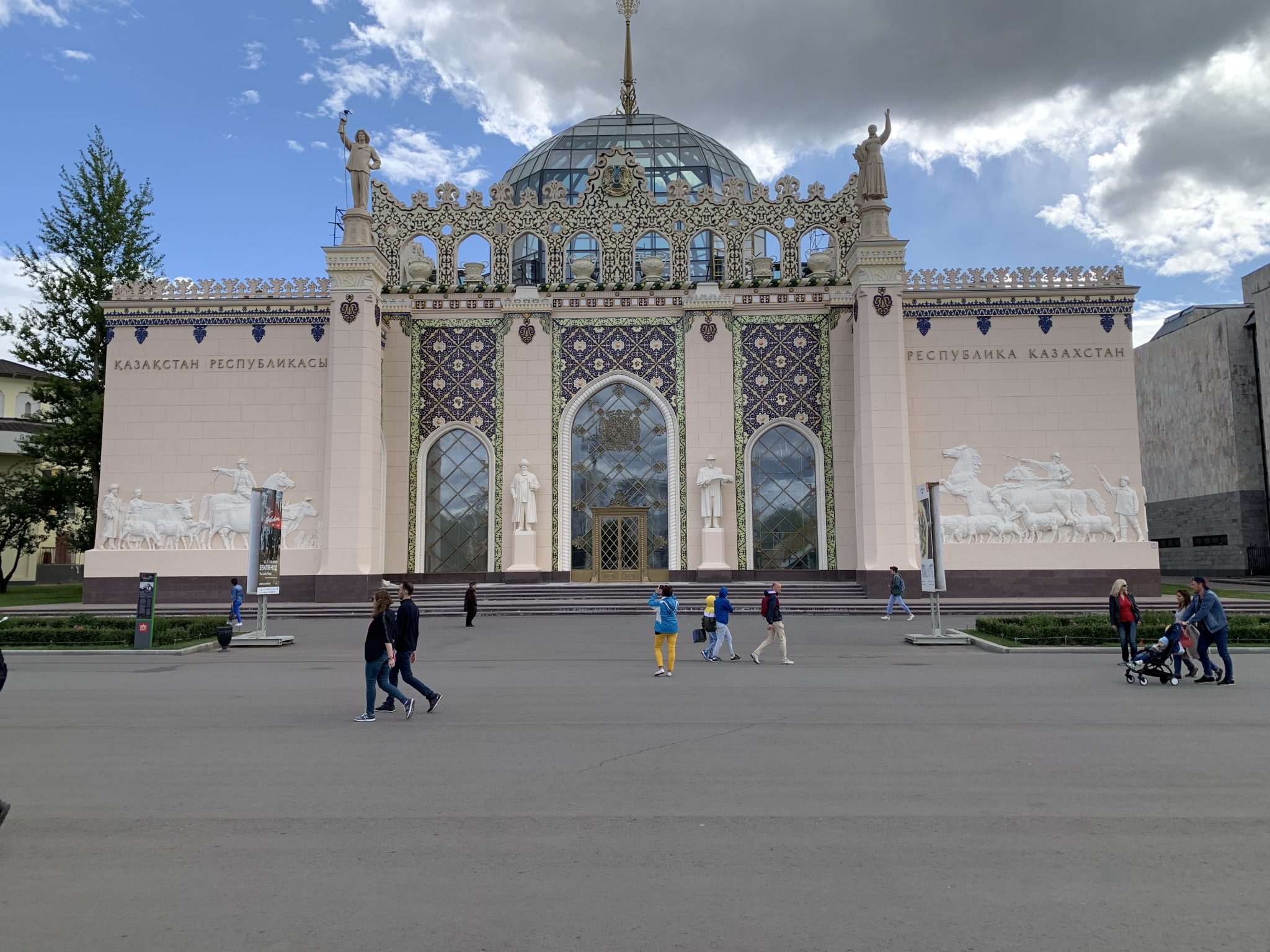 The photo below is looking toward the end of the Central Alley past the Stone Flower fountain toward building 58, the Agriculture Pavillion. 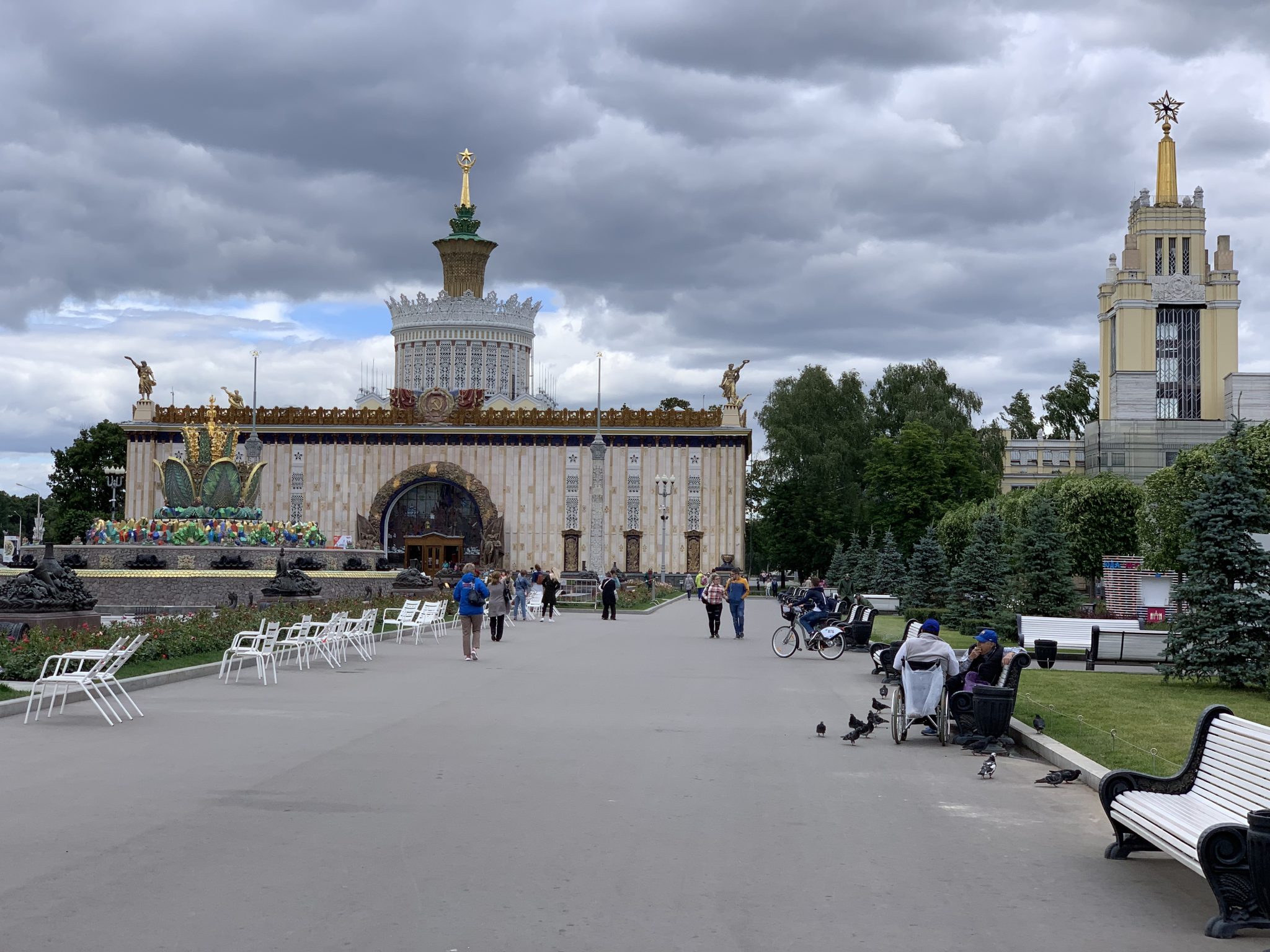 Most of the buildings had their numbers with plaques out front telling what the buildings represented or contained. Building number 58 in the photo below housed the  “Agriculture Pavilion.” Many of the plaques had English descriptions. The one for building 58 says:

Initially, the pavilion demonstrated the economic success of the Ukrainian SSR, and later there was an exposition dedicated to agricultural crops.

Themes of fertility and abundance are echoed through the architecture of the pavilion: embossed gold ears adorn the walls with ceramic blocks, the entrance arch is framed with a huge wreath of cereals, vegetables and fruits. The open work tower in the shape of the crown, above which a golden sheaf and a spire with a star rise, holds the eye. The sculptures of girls with wreaths in the corners of the pavilion symbolize the glory of the collective farm system. 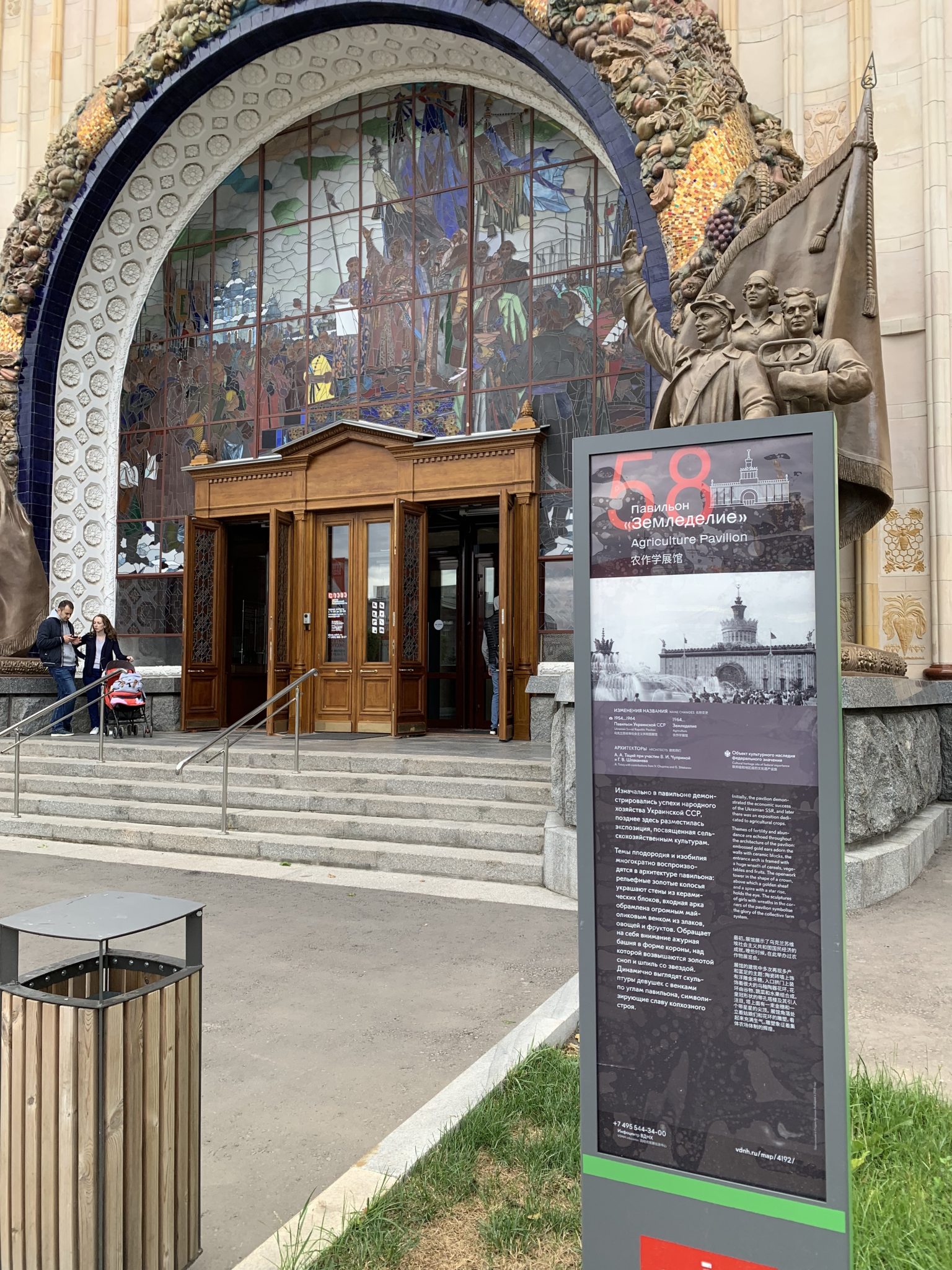 The Stone Flower fountain was not working on the day that we game, but it was quite ornate up close. 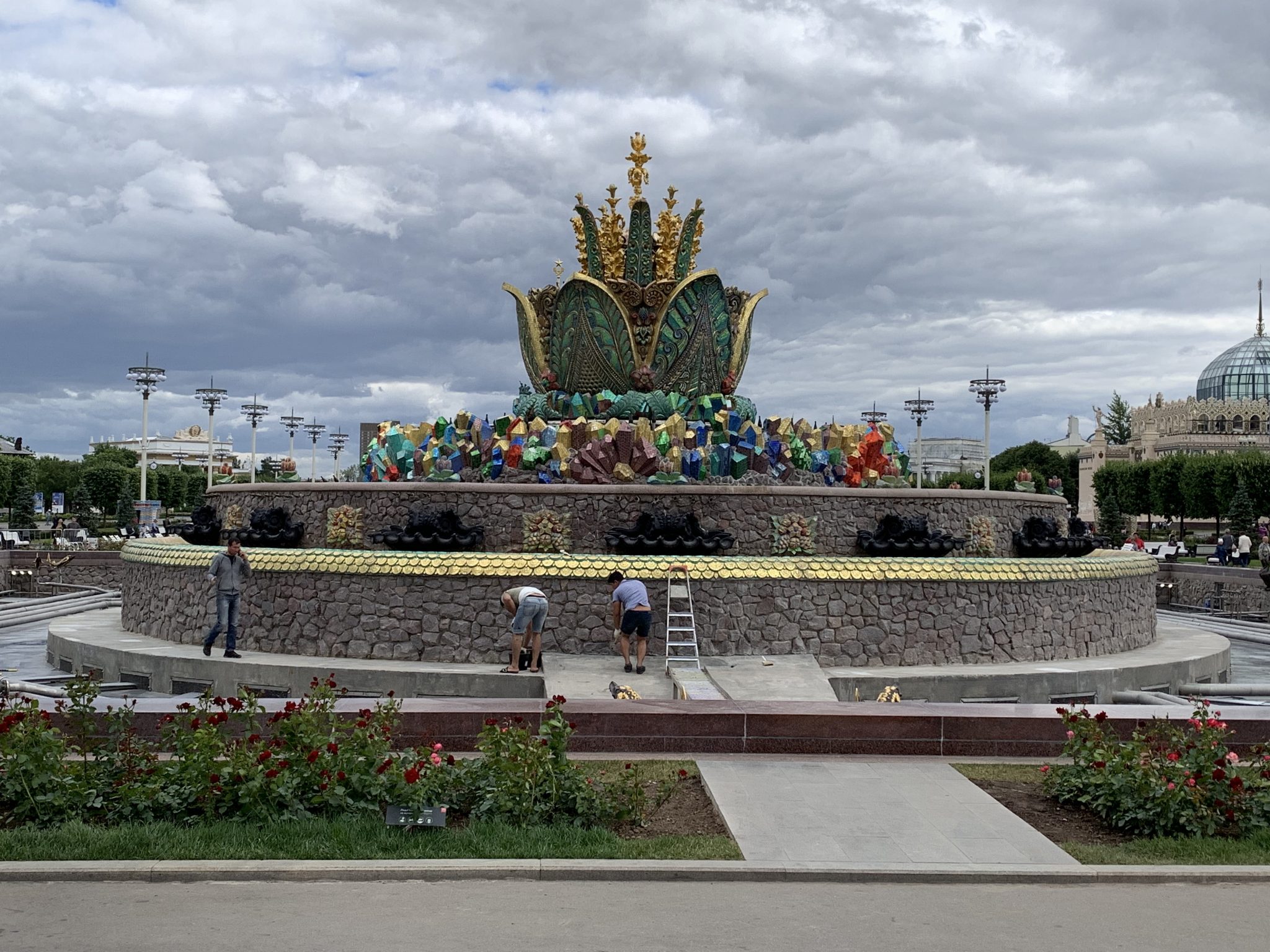 Past building 58 and the Central Alley were…even more buildings! While we knew about the Cosmonaut museum, we did not realize that there was an Aviation and Space Museum on the Exhibition grounds. This is probably why the taxi driver dropped us off where he did, and kept pointing this direction instead of towards the Cosmonaut Museum. The Aviation and Space Museum is housed in the building behind the Vostok rocket, the building with the grey dome. This plaza also has an Su-27 fighter and a helicopter. 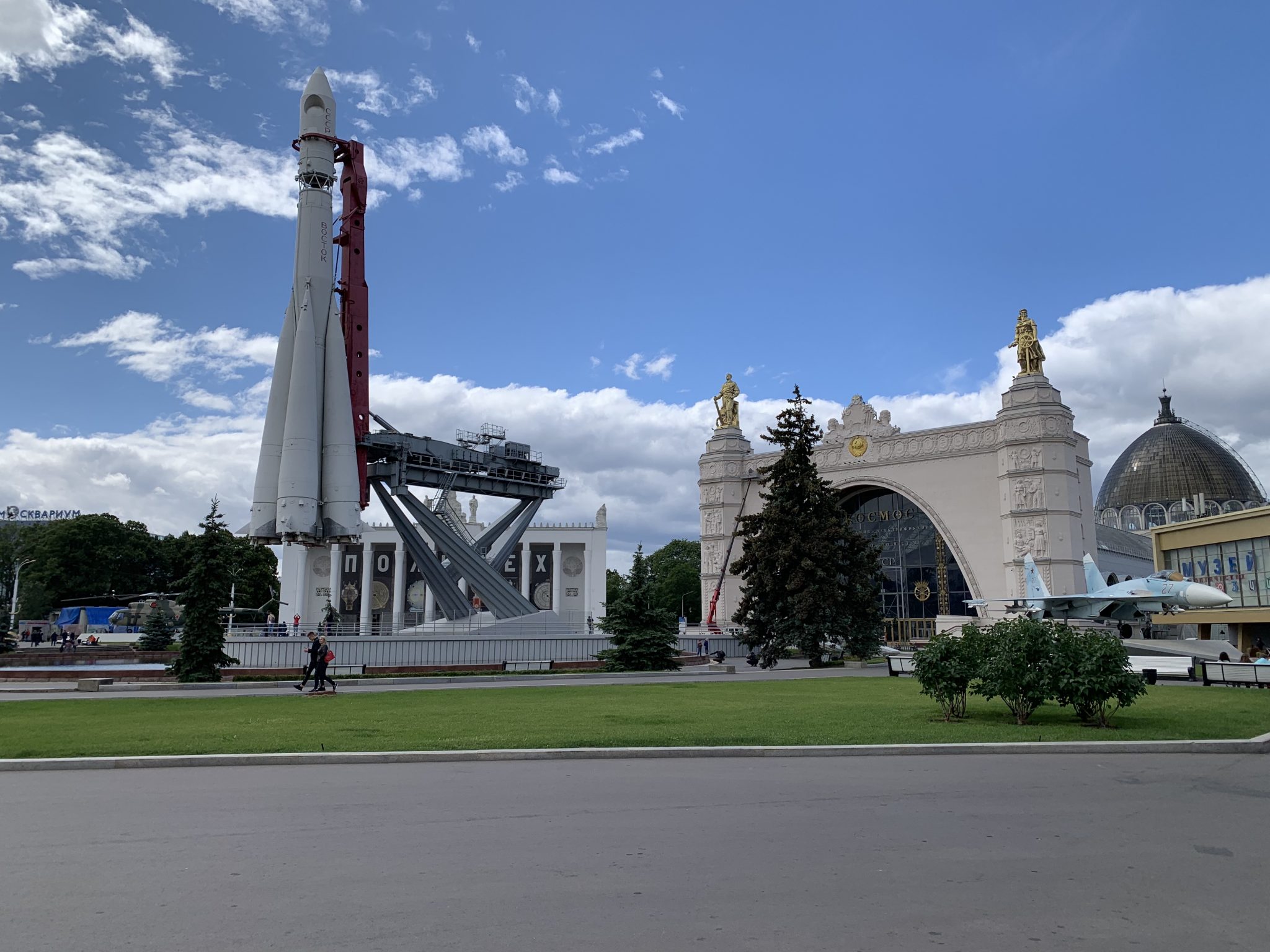 There is also an old airplane on the other side of the Vostok rocket. 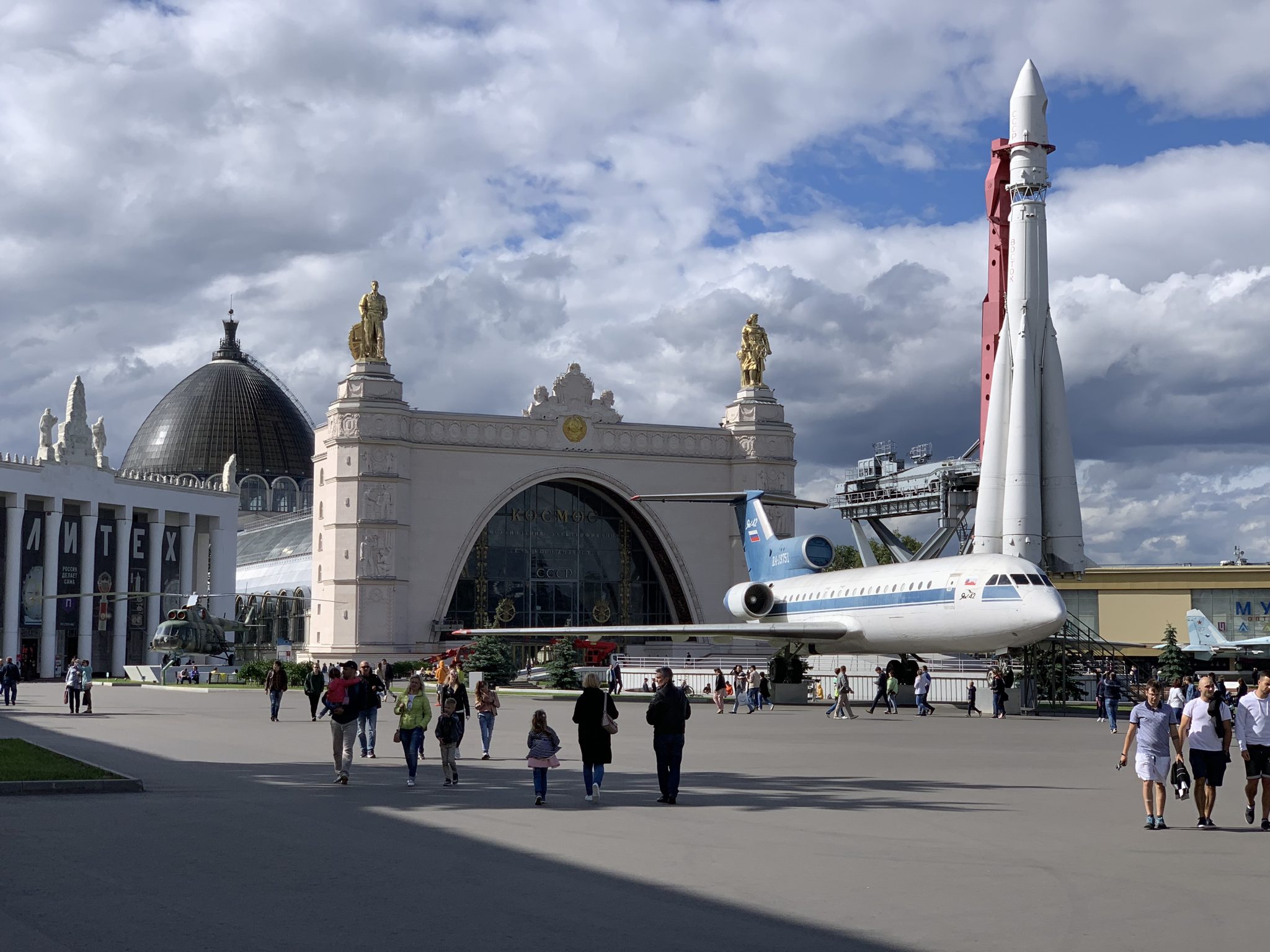 If there was ever a place I was desperate to buy a guide book – it would be this Cosmonautics and Aviation Center at VDNKh (that is the original Russian site. Here is a Google Translate to English version). I would have bought one in Russian since I couldn’t find one in English. But neither were available. There were so many different exhibits and pieces it was hard to keep track. Luckily, most of the description cards were in both Russian and English.

The best description of this center came from the Google translated site:

In the spring of 2018, the Cosmonautics and Aviation Center opened in the updated pavilion. A large-scale exhibition is dedicated to the history of the achievements of the domestic space industry. The exhibition space consists of three sections. “KB-1. Space Boulevard ” with full-scale exhibits and full-size mock-ups of spacecraft demonstrates the implemented projects of the 20th century and the achievements of Russian cosmonautics. Section “KB-2. Design Bureau ” talks about the research of medicine, biology and astronomy in the space field. “KB-3. Cosmodrome of the Future ” tells of modern space exploration and the development of technology, intergalactic forecasts of futurologists and science fiction writers. Here you can also try out game simulators and visit the 5D cinema “Space Sphere”. 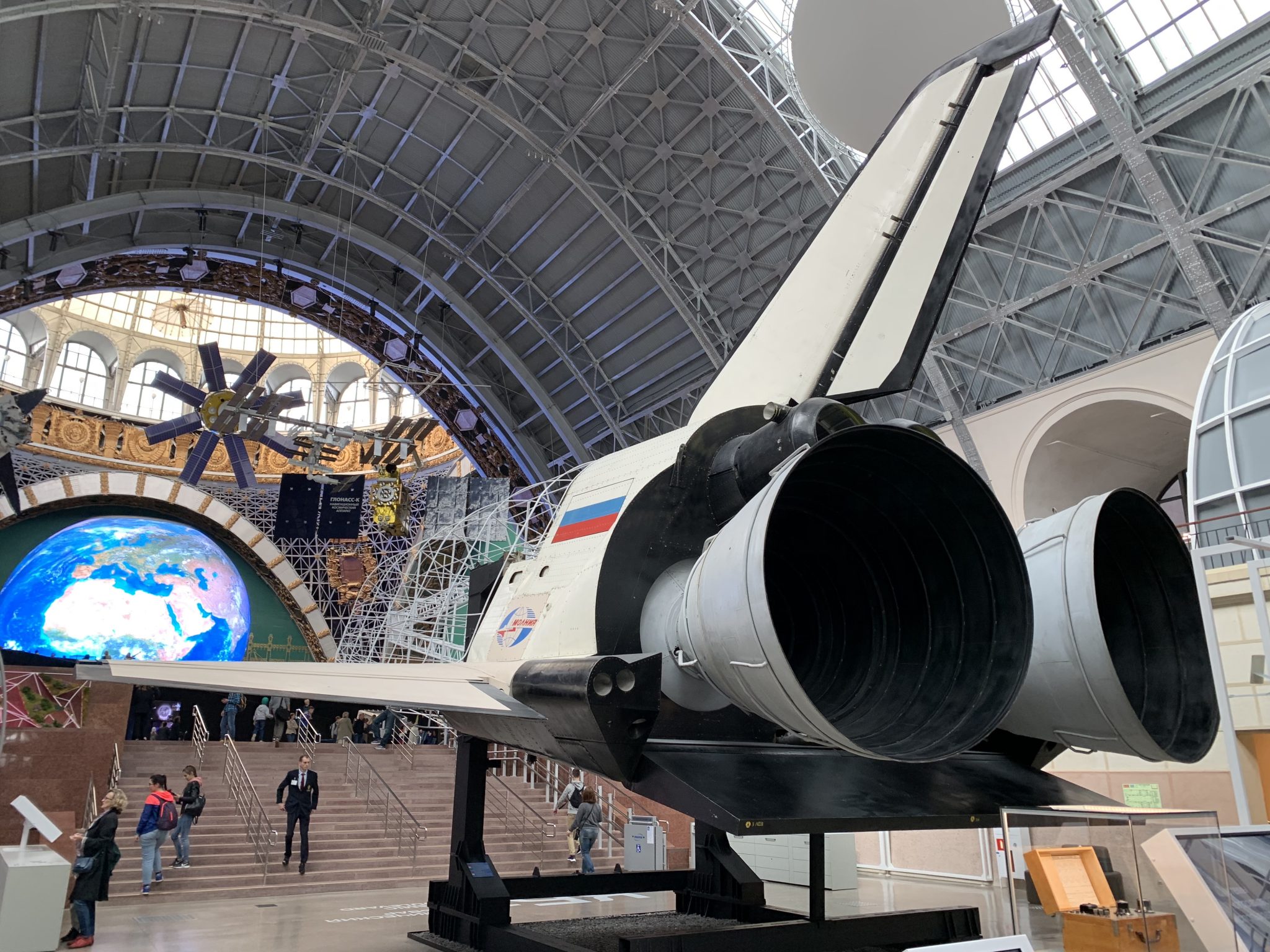 This gent was one of the greeters at the center. Notice in the upper right corner of the screen behind him – his camera has locked on both mine and my wife’s faces. 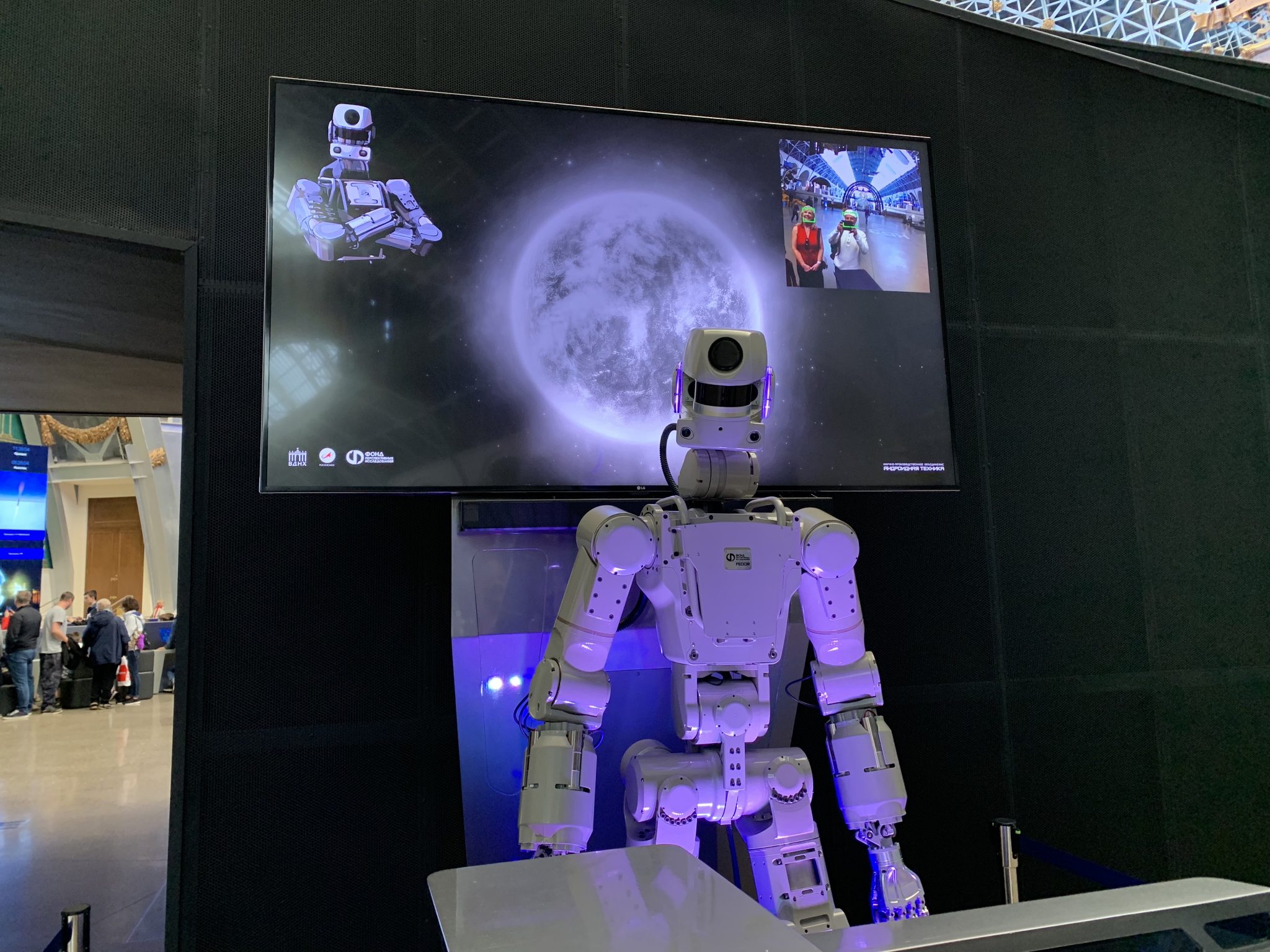 The well-used piece below is an actual descent vehicle of a Soyuz TMA (Transport Upgraded Anthropometric) spacecraft. The description near it said “the device provides for the delivery of a payload from orbit and for a soft landing on the surface of Earth. It is designed for a crew of one to three people. The module is equipped with controls, life-support and radio communications systems.” 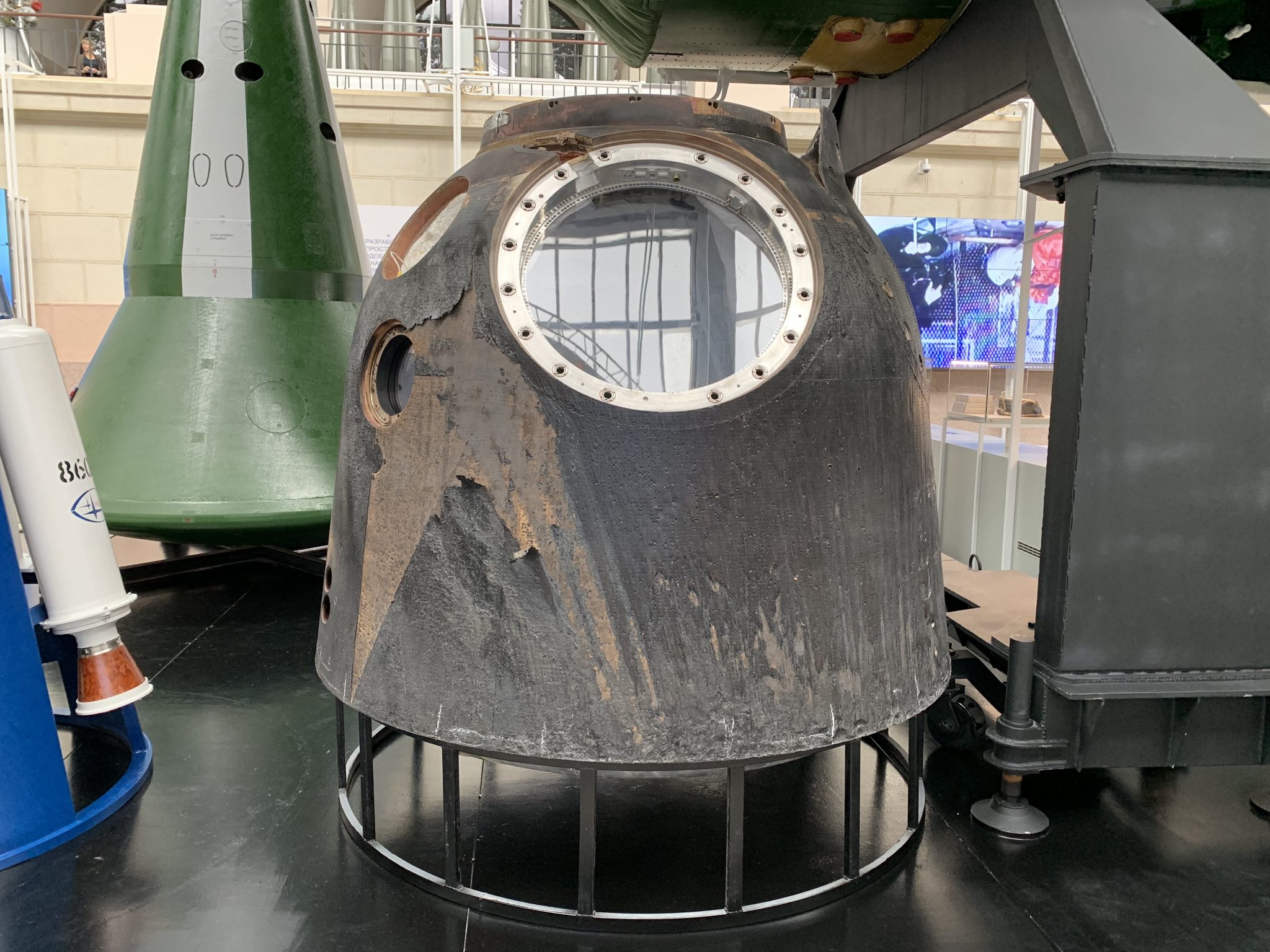 There was also was also an excellent collection of Soviet and Russian space suits. 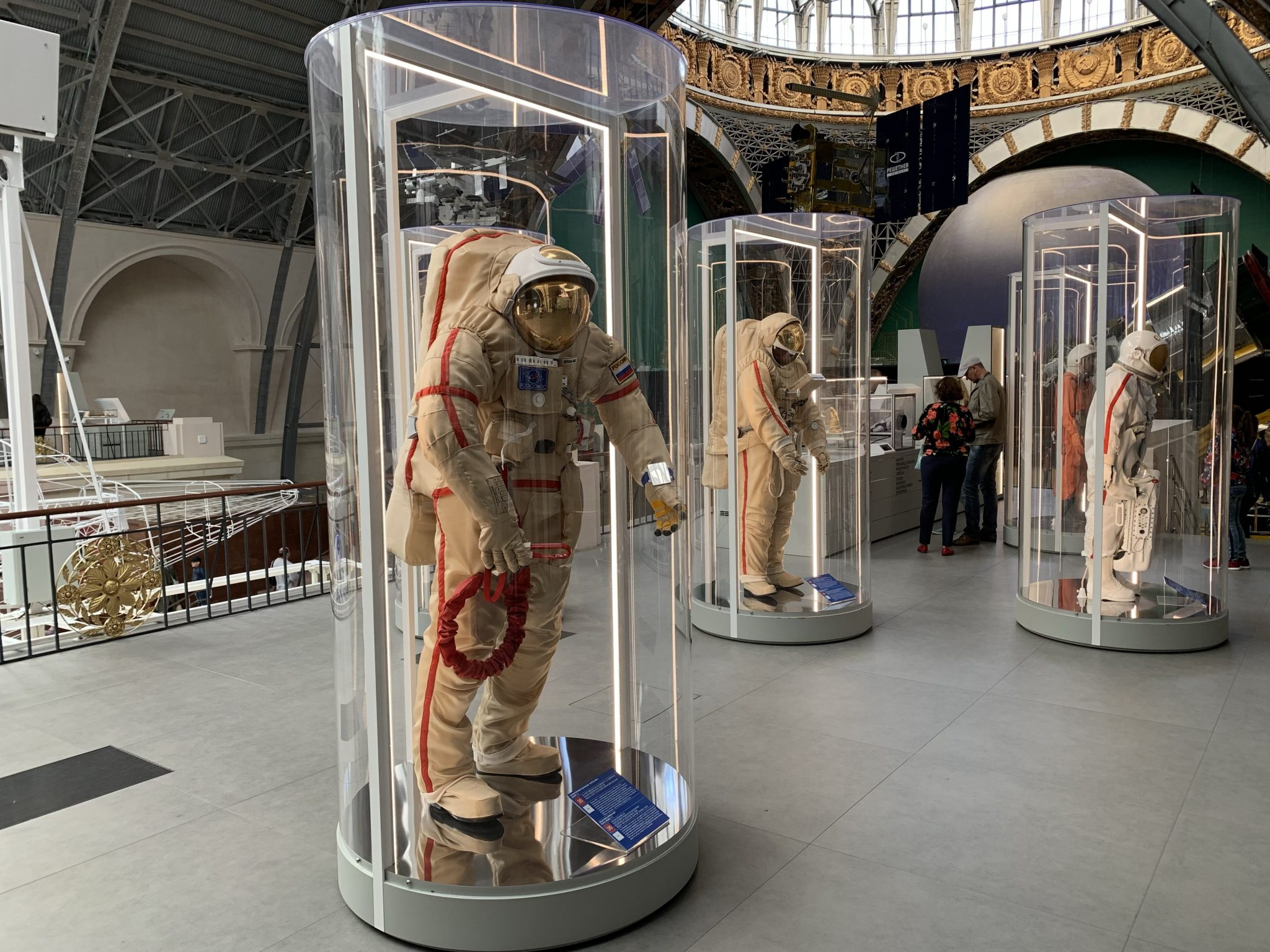 The first one there was the Orlan-MKS Space Suit. The plaque states that it is “the largest and most evolved space suit for extravehicular activity. The ‘MKS’ in its name stands for ‘modernized, computerized, synthetic.’ The suit has a lifespan of 15 space walks.” 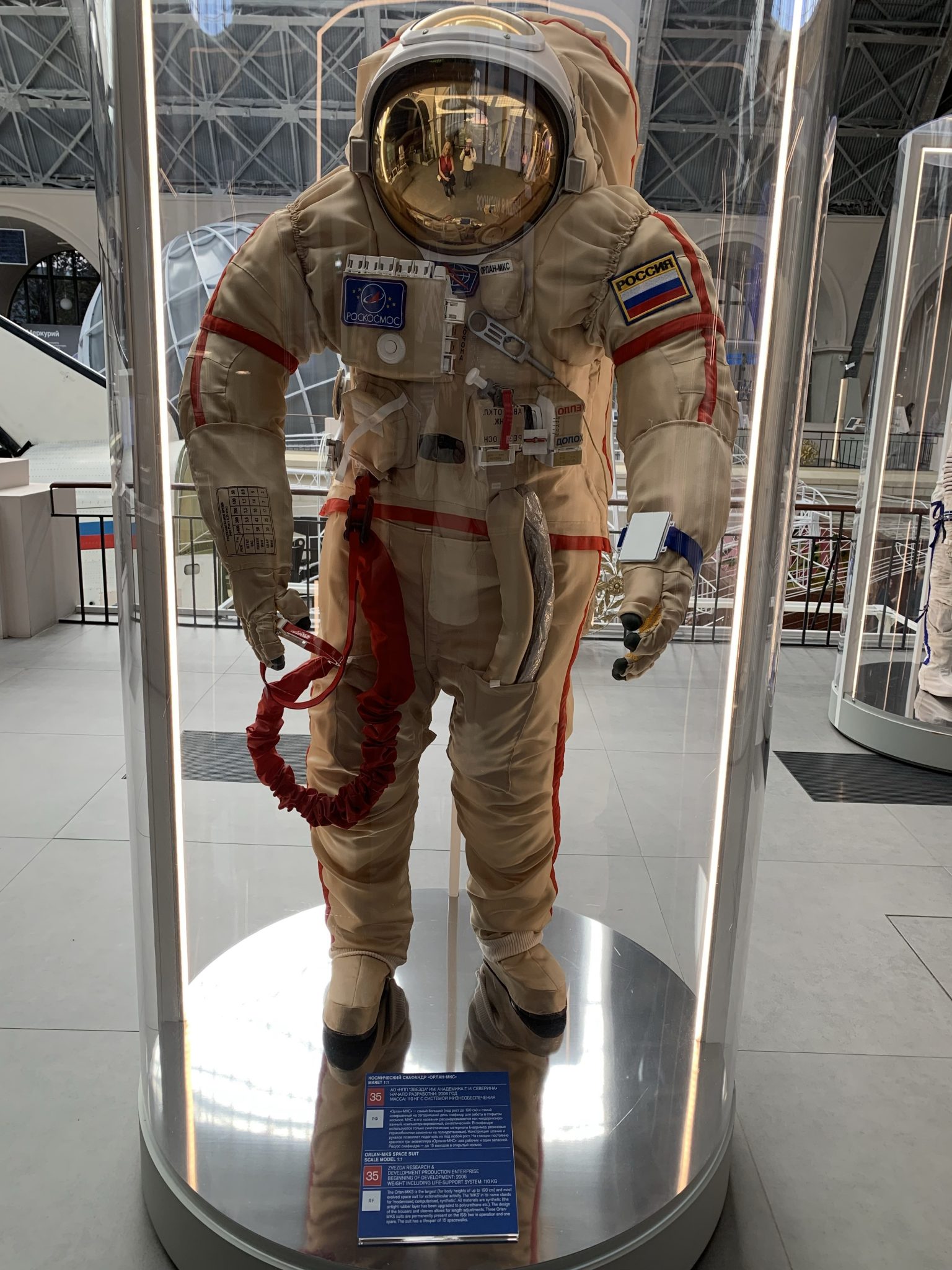 In the middle of the complex there was a replica of the Mir space station. We went into both sides. 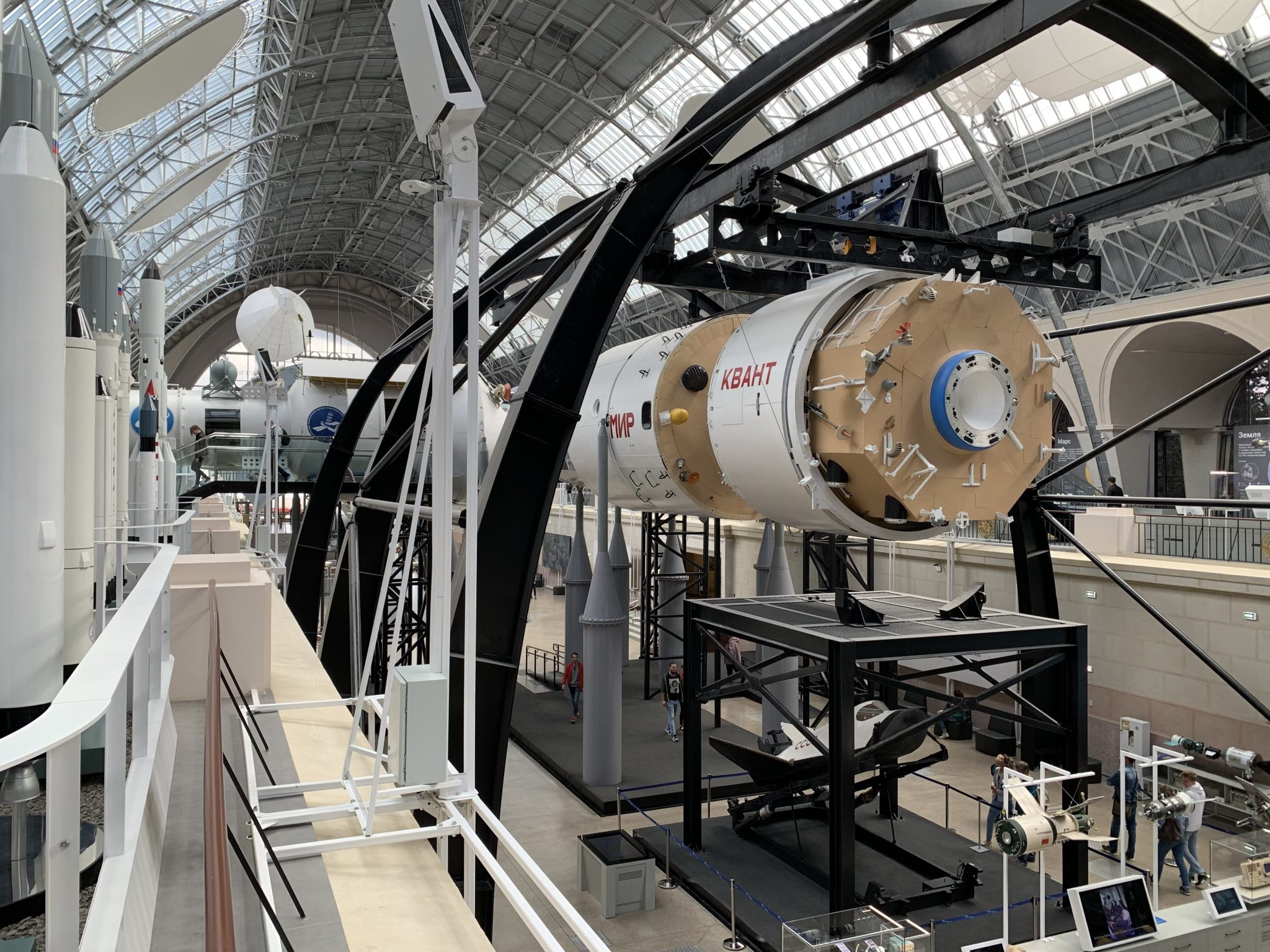 There are miniature models of each of the launch and test facilities. There are models of the Soviet Lunar Rovers, known as the Lunokhod. 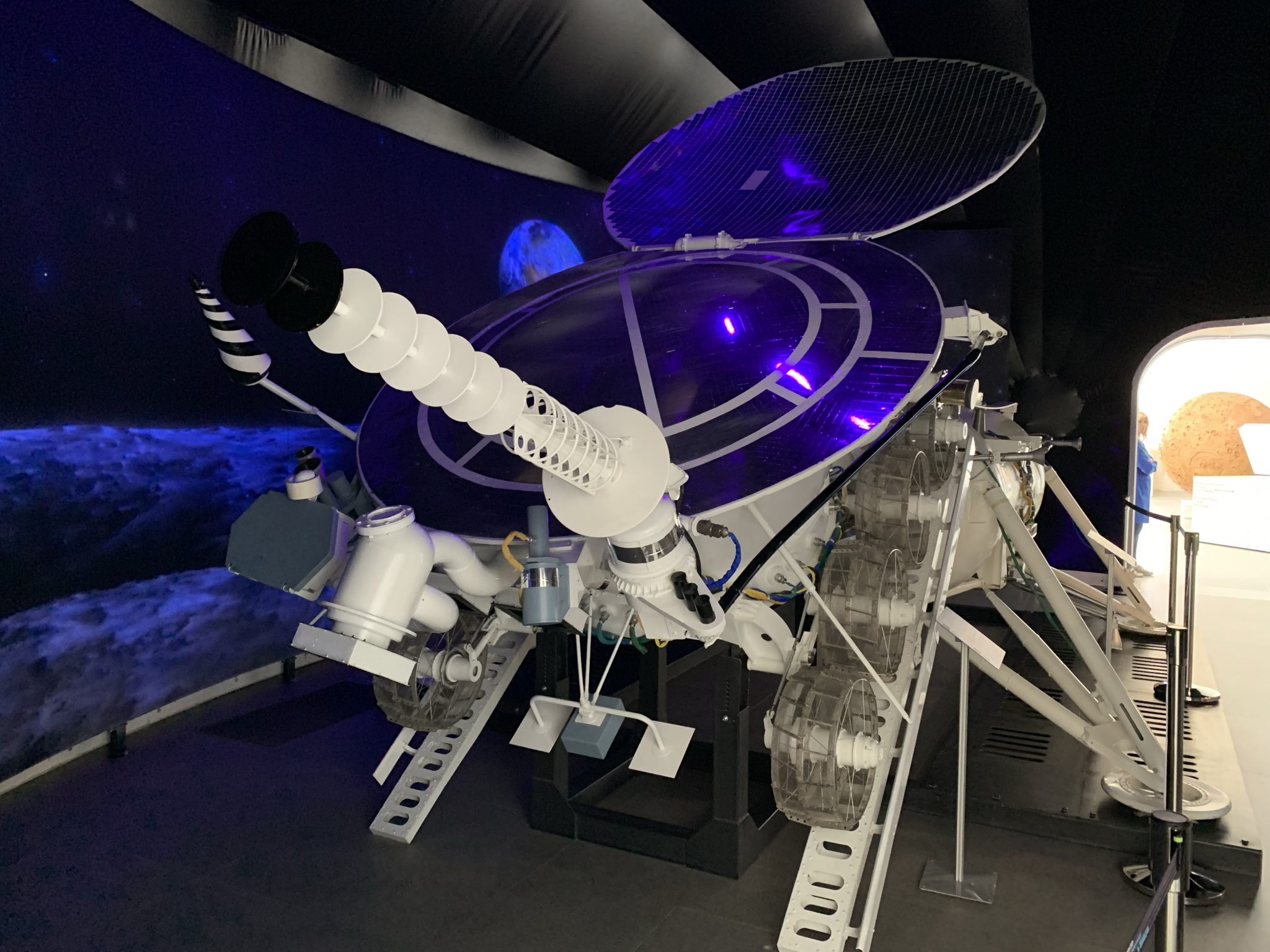 There was obviously way too much to see on just one visit…though much to my wife’s chagrin, I did try to see it all. 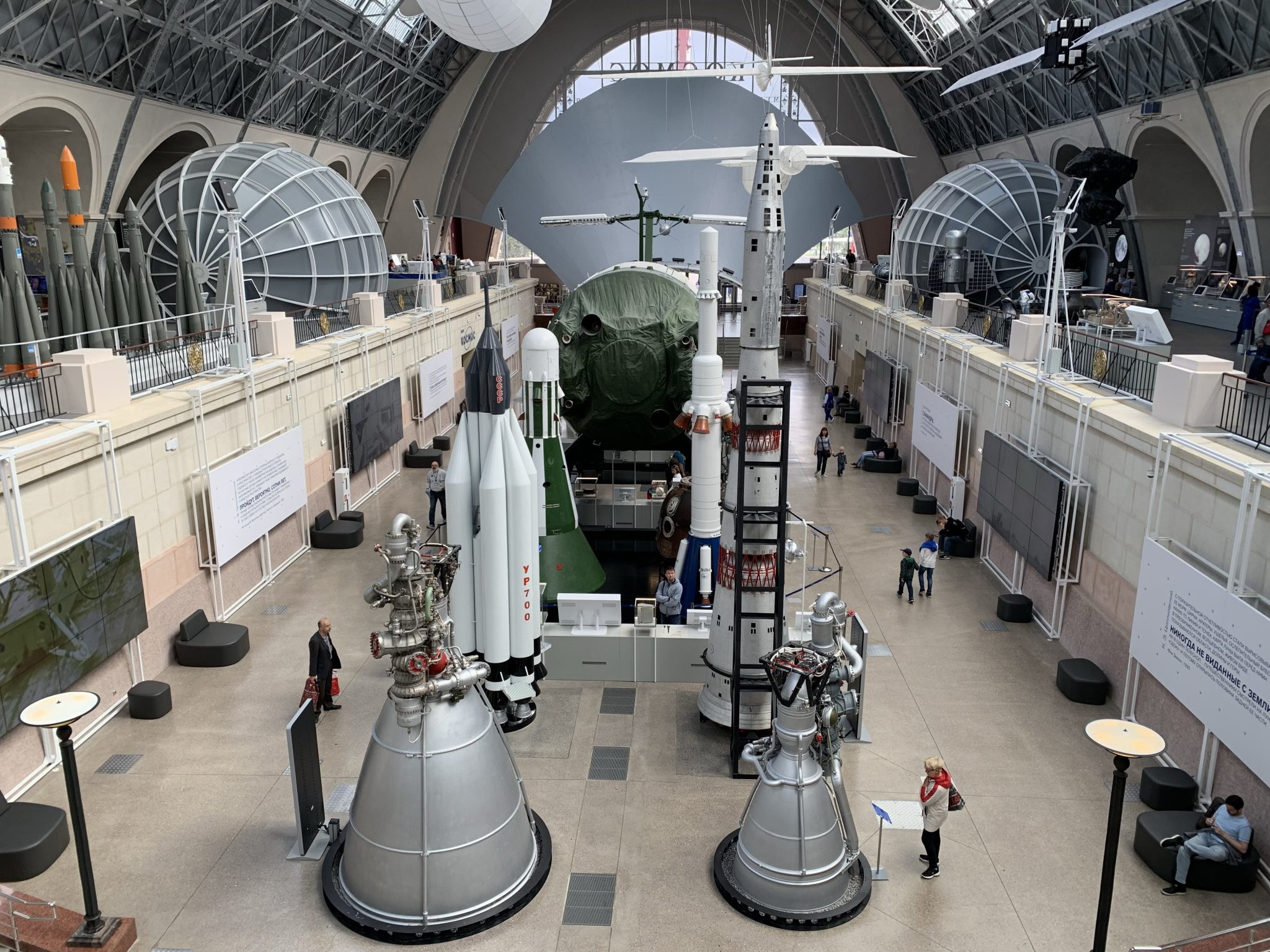 After we left the Aviation and Space Center, we went in search of coffee. It was still cool and windy. Instead we saw this building. We didn’t need an interpreter to determine this was an aquarium. 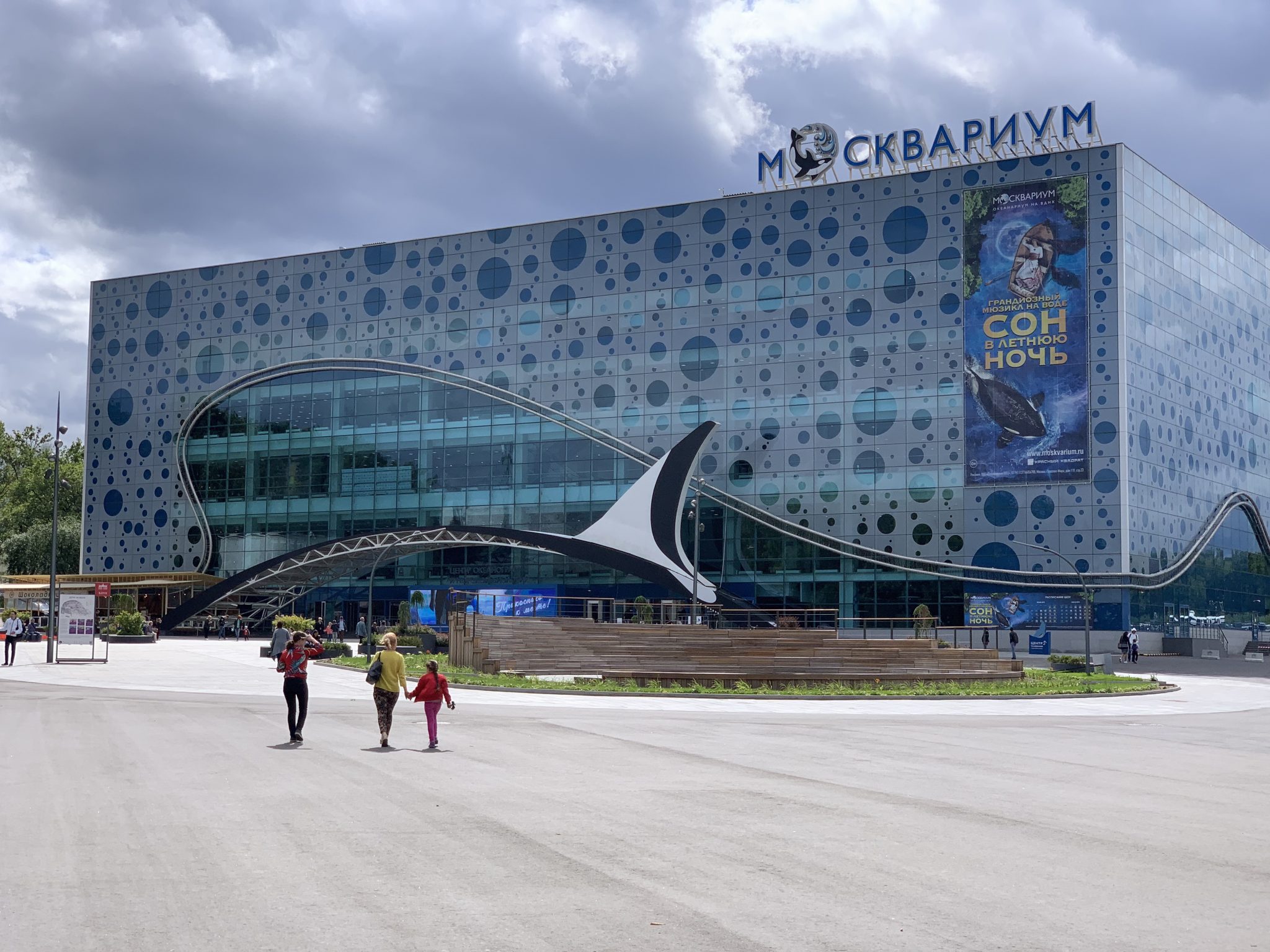 The size of this building is deceptive. There seemed to be one of every kind of sea creature. 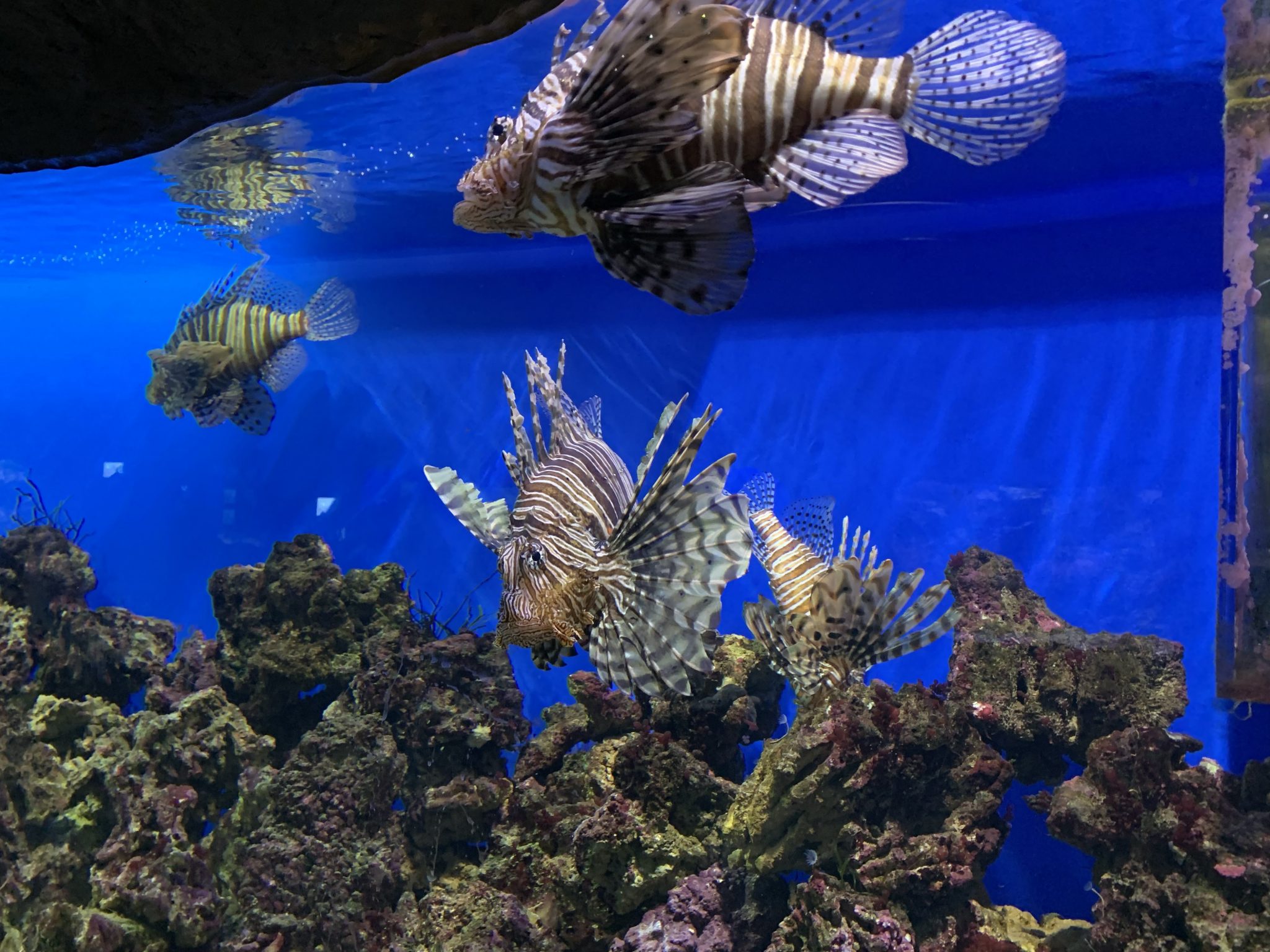 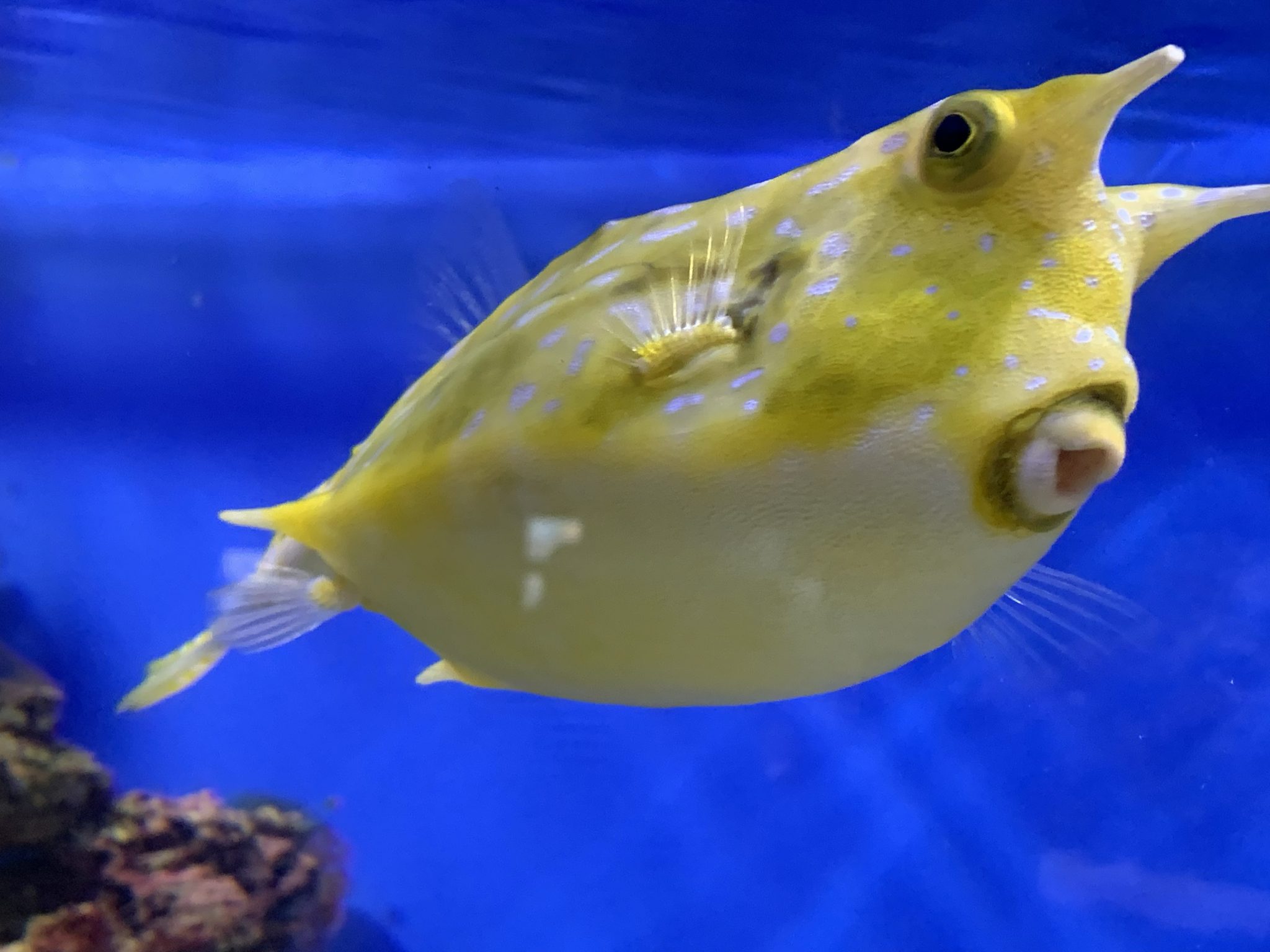 It was hard to tell if this purple fish was enjoying himself or not. Except of his fins, he/she rarely moved.

There were lots of sharks, usually sharing tanks with lots of other fish. 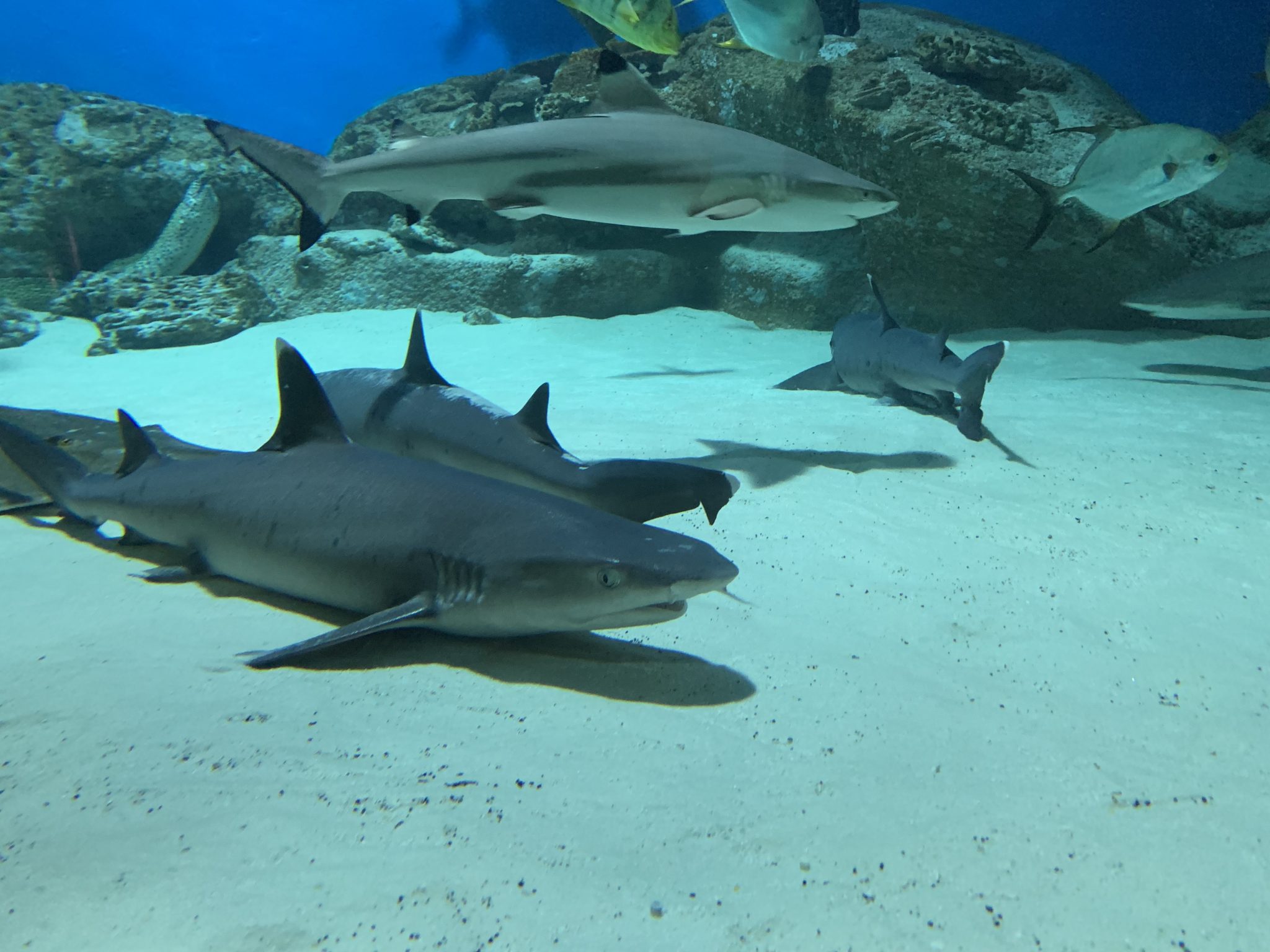 Below are some of the sharks companions. 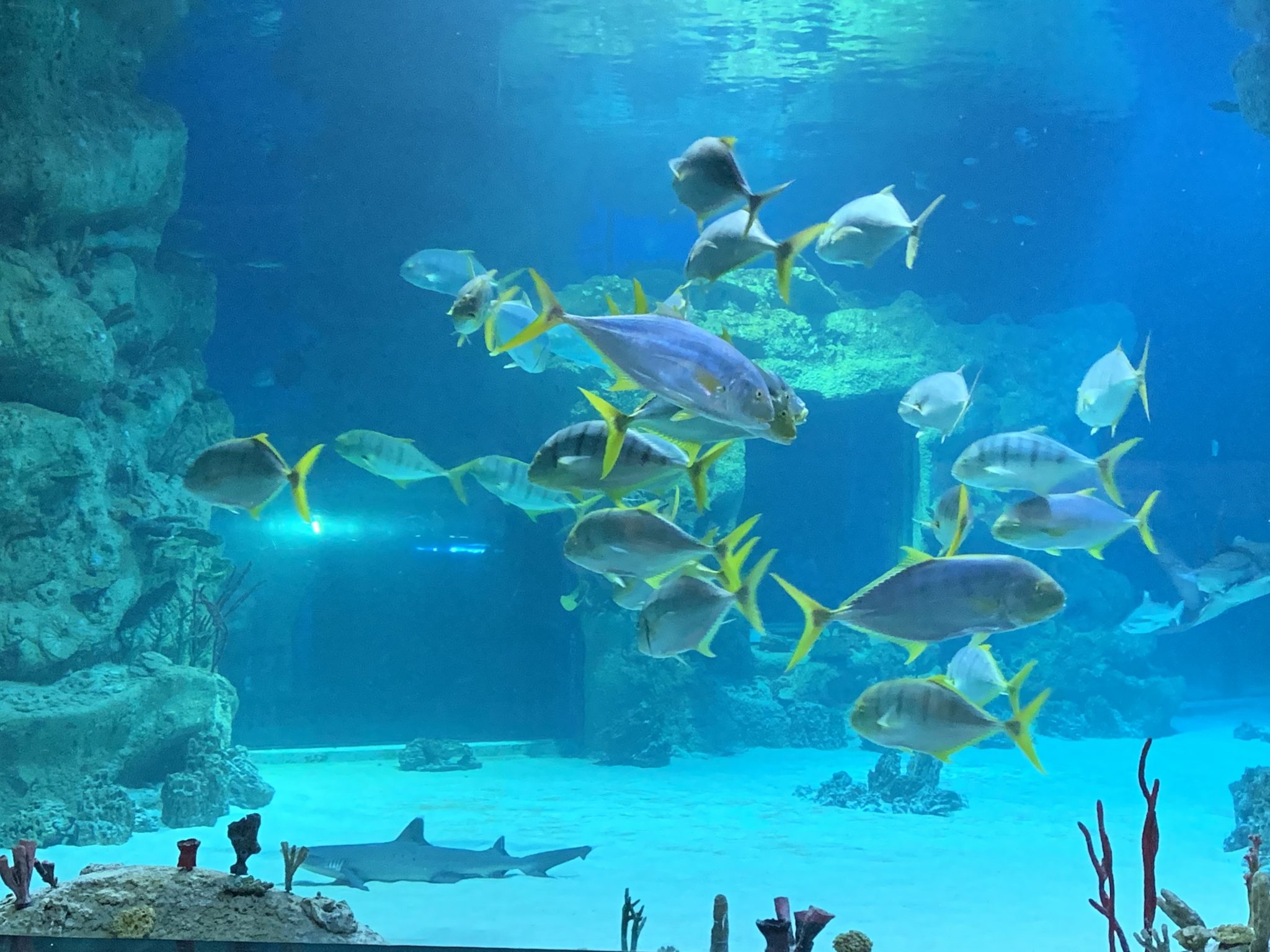 There was also a beluga whale. We did not see any spy cameras attached to him! 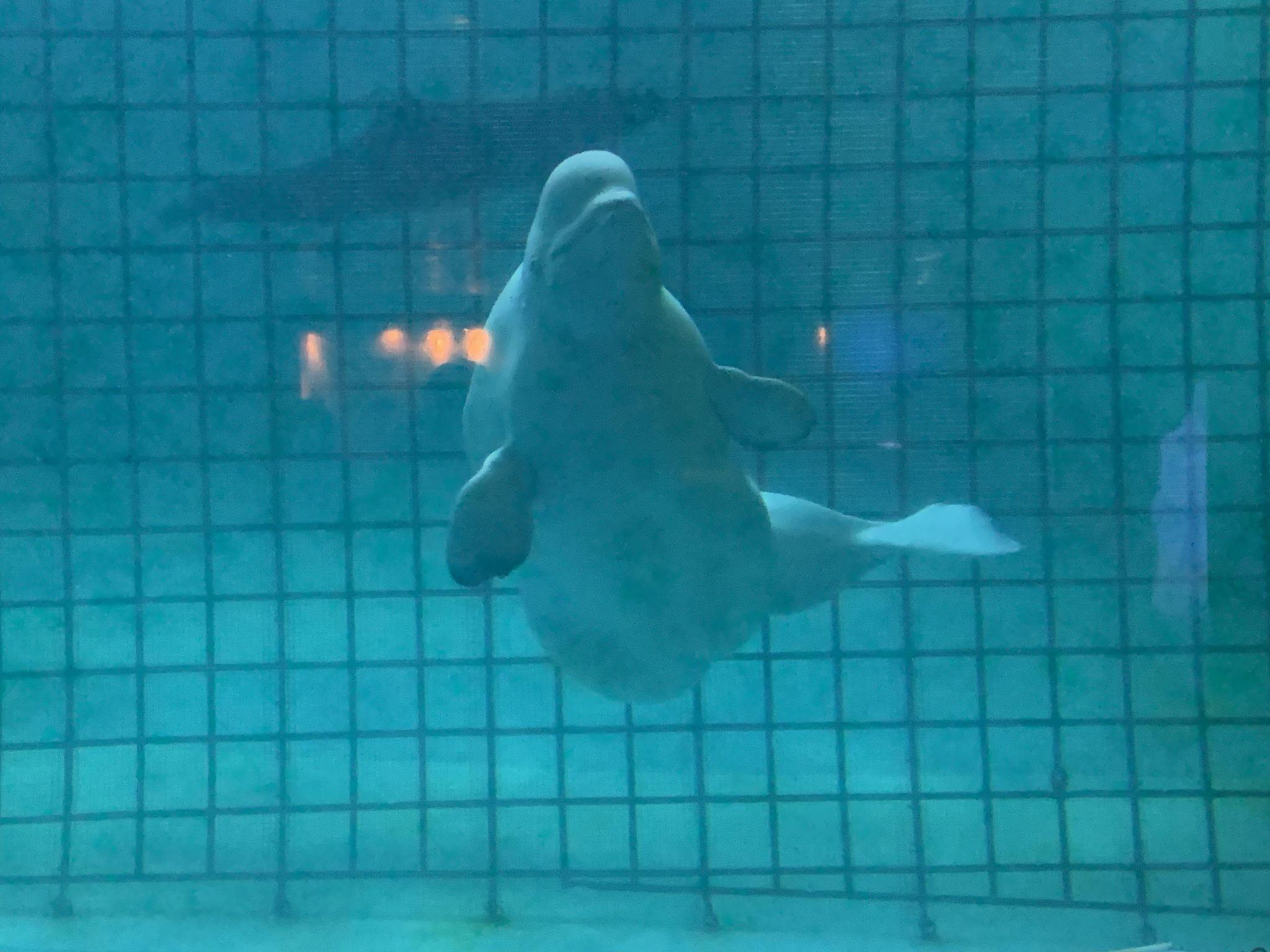 They even had Killer whales, who would go out of sight, then swim back in upside down with a smile on their face. 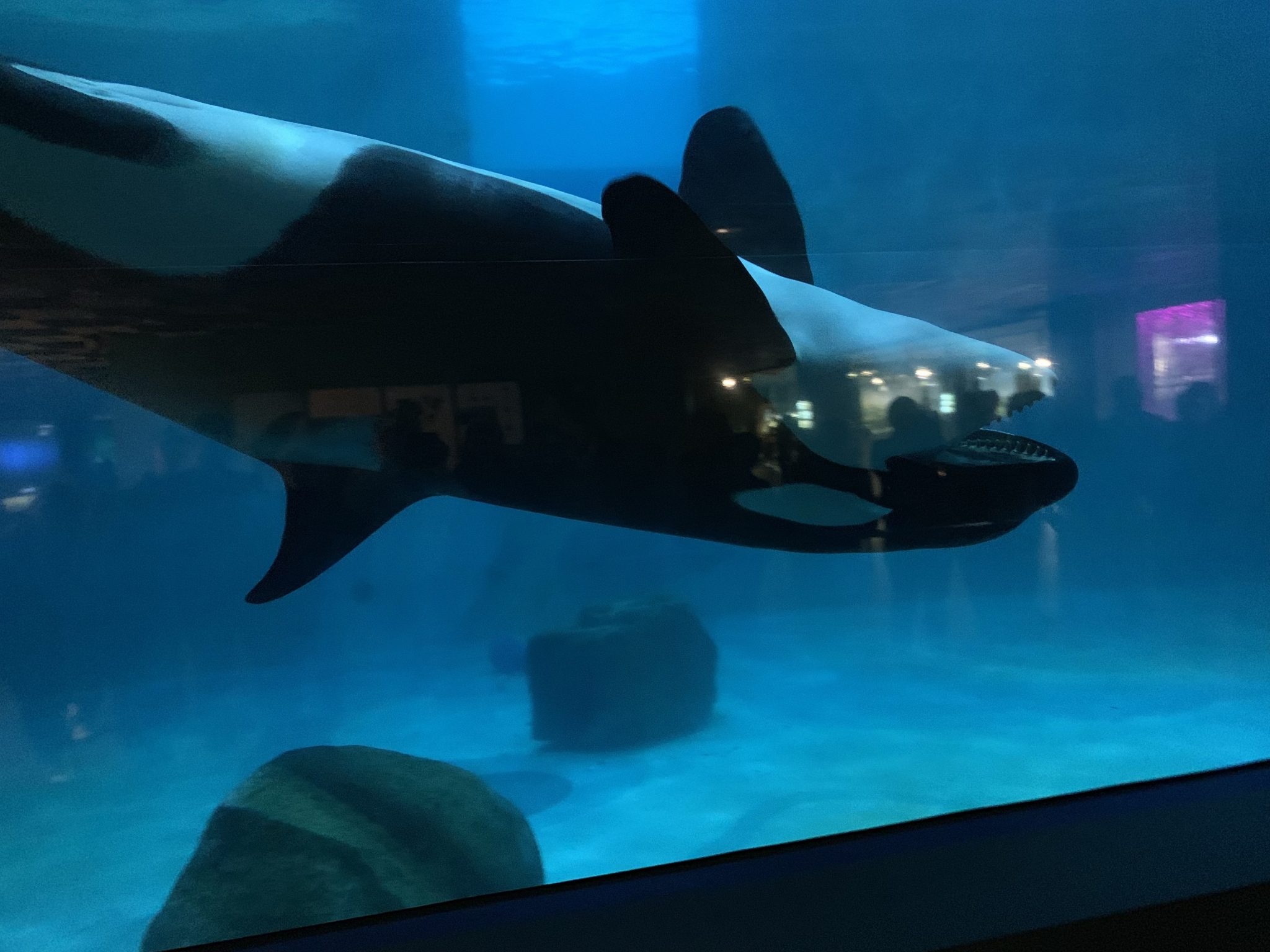 We eventually did find a coffee shop near the People’s Fountain to have a snack and a drink. Then, in spite of a very long, interesting and welcomed detour through this VDNKh park, we did finally make our way to the Cosmonaut museum. 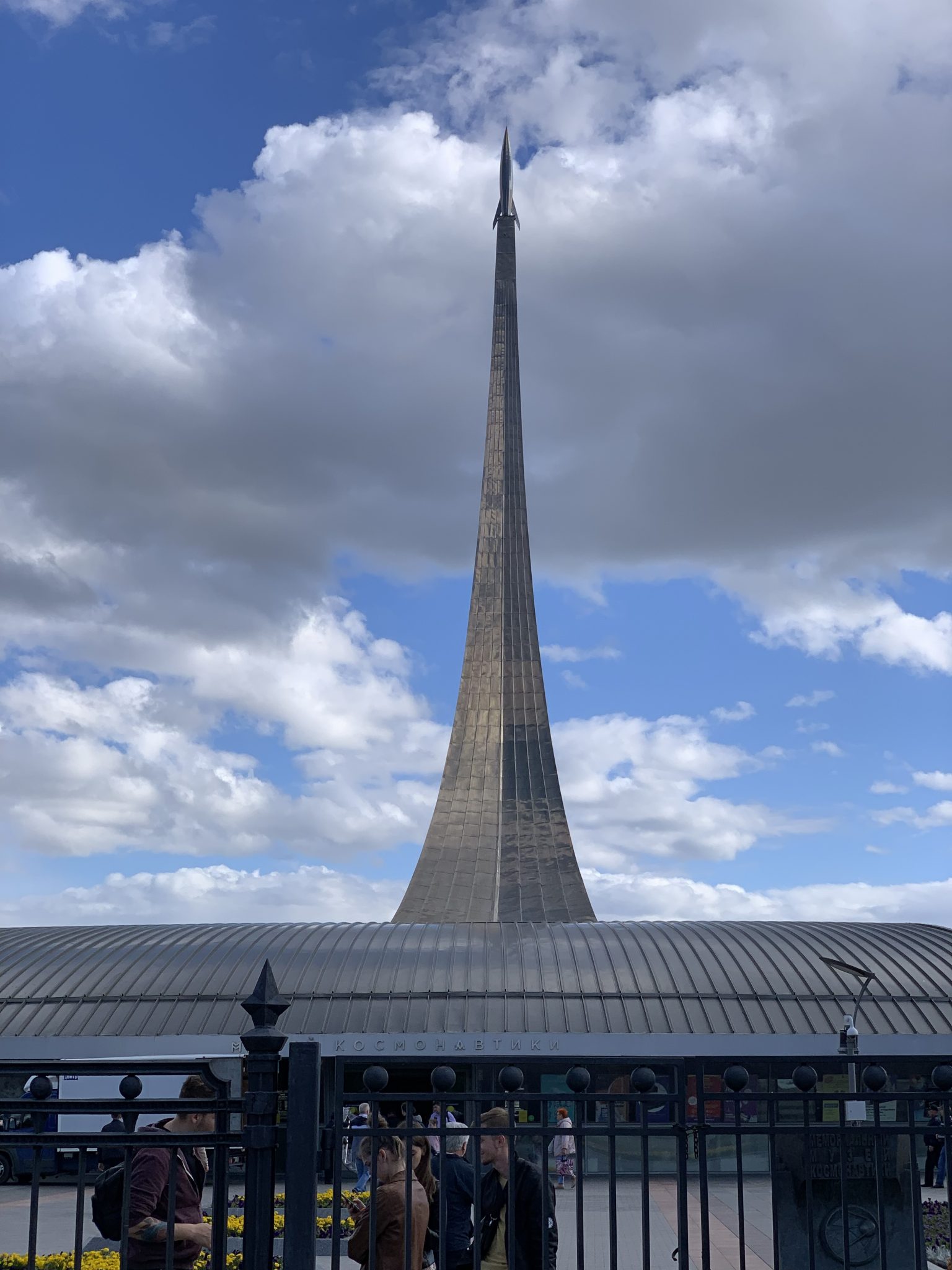